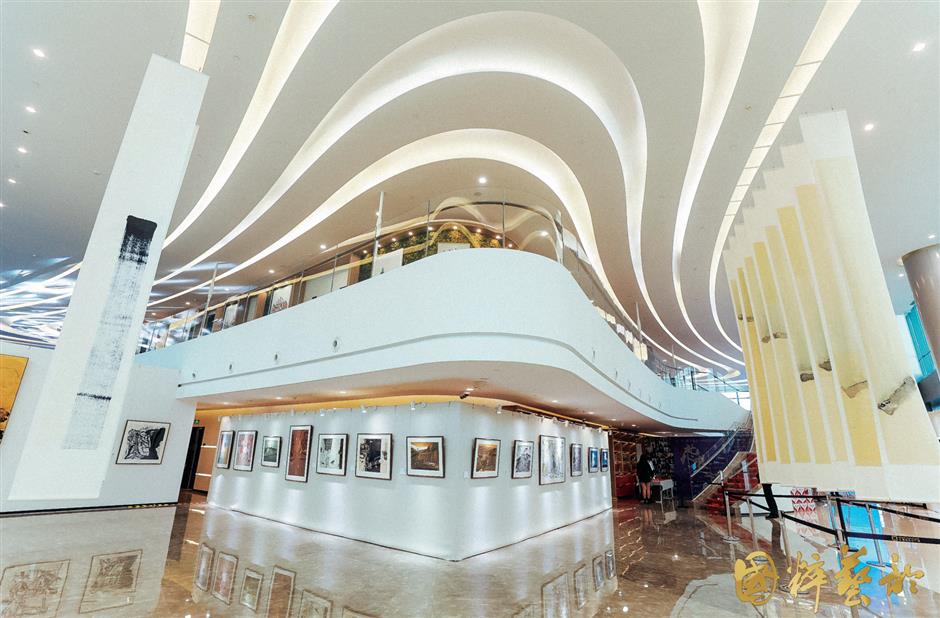 Over 160 works of traditional, contemporary and new media from about 60 leading artists from across the country are being exhibited at the 320-meter-high Sinar Mas Plaza.

Over 160 works of traditional, contemporary and new media from about 60 leading artists from across the country are being exhibited at the 320-meter-high Sinar Mas Plaza to mark the centenary of the Communist Party of China and showcase the Party's history in the landmark North Bund area.

The works mainly showcase the North Bund, known as the "global sitting room" of Shanghai.

Organizers invited 20 artists from across the country, including the presidents of provincial art associations, to tour the riverside region.

Mao Shi'an, vice president of the China Literature and Art Critics Association, said the North Bund in Hongkou had witnessed the "heroic history" of the Party over the past century.

"We can visit the former site of the Fourth National Congress of the Party, the League of the Left-Wing Writers' Memorial Site, the site of recording of the national anthem as well as the design of China's national flag," said Mao.

One of the former residences of Nie Er (1912-1935), the composer of the national anthem, the "March of the Volunteers," was in Hongkou.

Over 100 years ago, a batch of aspiring young people set off from the North Bund to study abroad and seek a new future for their country.

"The exhibition aims not only to enhance the art standard of the 'global sitting room,' but also to showcase the charm of the North Bund through the artworks," said Shi Yunqi, the curator of the exhibition.

Hongkou has a profound historical relationship with artists, according to the organizers. The Wild Wind Painting Association (Ye Feng Hua Hui) was founded in Hongkou Park in August 1932 by the China Left-wing Artists' Association. Many famous painters were members of the painting association.

Lu Xun, the forefather of modern Chinese literature, used to give lectures to members and donated to the painting association. The association launched a joint exhibition in November 1932 with students of art academies in Shanghai, Nanjing and Suzhou in neighboring Jiangsu Province and Hangzhou in Zhejiang Province. Hundreds of paintings were displayed at the Shanghai New World building to support the fight against the Japanese invaders.

A fierce battle once took place around the building that led to Shanghai's liberation.

Completed in 1924, the building was once the center of China's postal system.

Today part of the building houses the postal museum.

Cao Chao, the honorary president of the artists' association in east Jiangxi Province, was one of the earliest artists invited to the North Bund in early March of that year for the exhibition.

He climbed onto one of the highrises and created an overview of the office buildings and shopping complexes on the riverside in the dawn light.

"The waterfront is an amazing place where the modern atmosphere blends with the profound history," Cai said. "The riverside region can fully represent the urban spirits of Shanghai," he added.

Zhang Youxian, former dean of the Arts College of Nanjing University of the Arts, created a painting on the Music Valley on the North Bund.

"Although I've been in Shanghai for many times, I've never seen such a beautiful night view on the North Bund," Zhang said.

He was inspired by a fashion beer bar amid the historic buildings in the valley and spent an entire afternoon to complete the painting.

Liu Jian, secretary general of the arts commission of China's National Academy of Painting, was attracted by the old residential community on the North Bund.

He created a painting about Shanghai's unique shikumen, or stone-gate communities, along the Huangpu River.

A new round of development will commence on the North Bund waterfront in Hongkou to recapture its historical grandeur as a gathering place for the world's top shipping businesses and intellectuals.

The riverside region is part of Shanghai's "golden triangle," along with the Lujiazui financial hub in the Pudong New Area and the Bund in Huangpu District. The latest development blueprint released by the city's planning authority includes more economic, scientific and cultural elements to create a "world-class sitting room."

About 8.4 million square meters of new office space is planned that will be home to nearly 100 international companies and organizations.

The new office buildings will generate annual tax revenue of more than 100 million yuan (US$15.49 million), while the number of multinational firms based in the area will significantly expand.

As a highlight, construction will begin on a 480-meter high-rise building, covering about 350,000 square meters.

The building is earmarked to drive the development of high-end industries and become a home to global enterprises.

Nearly 1,800 financial companies from both home and abroad are already based in the North Bund region, which manages over 6 trillion yuan of assets.

More than 200 top-grade office buildings are being built on the 4-square-kilometer riverside region. Its development density will be on par with the London financial hub, which contributes nearly a third of London's GDP.