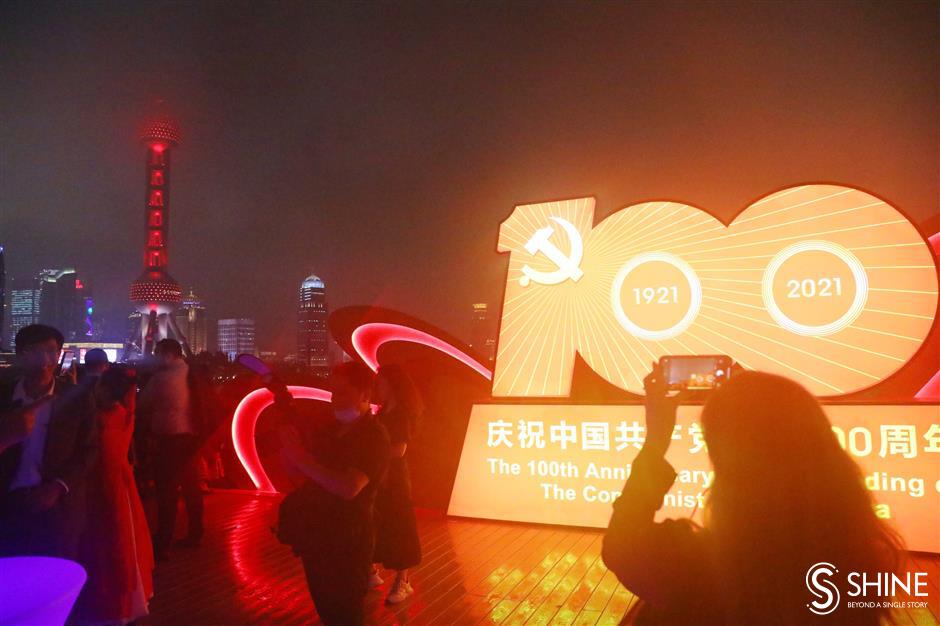 Expatriates take photos with an installation commemorating the 100th anniversary of the CPC.

More than 200 expatriates from nearly 30 countries and regions boarded a cruise ship for a special party in celebration of the 100th anniversary of the Communist Party of China over the weekend.

They enjoyed local delicacies, performances, a tour of the Huangpu River and a light show especially designed to celebrate the Party centenary.

Linda Painan, chairwoman of The Expatriate Center, which organized the event together with Huacao Jinfeng International Community Development Association and Yuexing Culture Tourism Group under the guidance of the Shanghai People's Association for Friendship with Foreign Countries, toasted the 100th birthday of the CPC.

"We are fortunate and blessed to be here to call this place our home away from our home and really lucky to witness this glorious moment with the Chinese people," she said. "Best wishes to the well-deserved 100th anniversary of the founding of the Communist Party of China."

"Congratulations to the CPC for its remarkable achievements in the past 100 years, especially in the recent decade. China has contributed much to the worldwide peace and prosperity, evidenced in its successful control of the COVID-19 pandemic at home and provision of vaccines and medical assistance for many countries around the world." 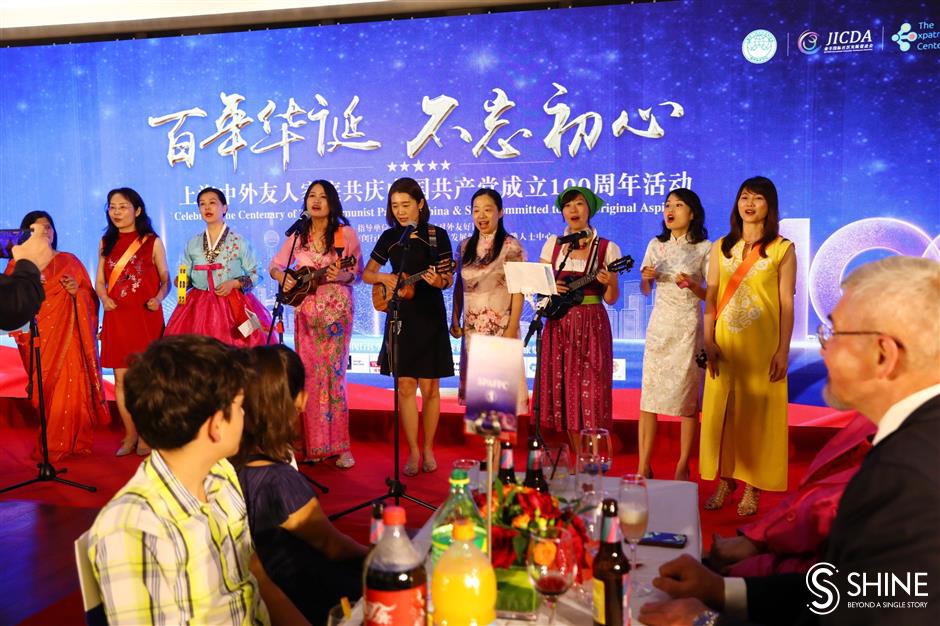 A ukulele recital by expats.

Justin O'Jack, chief representative of the University of Virginia China Office, said he first visited China 28 years ago for a family tour and returned to China to learn Chinese in 1996 in Yunnan Province, before moving to Shanghai for work in 1997.

Shanghai has since become the city where he has lived for the longest time. He married a Shanghainese woman and they have a daughter who accompanied them to the party, where international families sat together at long tables for a buffet dinner and cultural performances.

"As a foreigner, I am honored to be invited to a party celebrating the CPC centenary, and I'm touched by how the event is organized in a manner that considers what foreigners appreciate," he said. 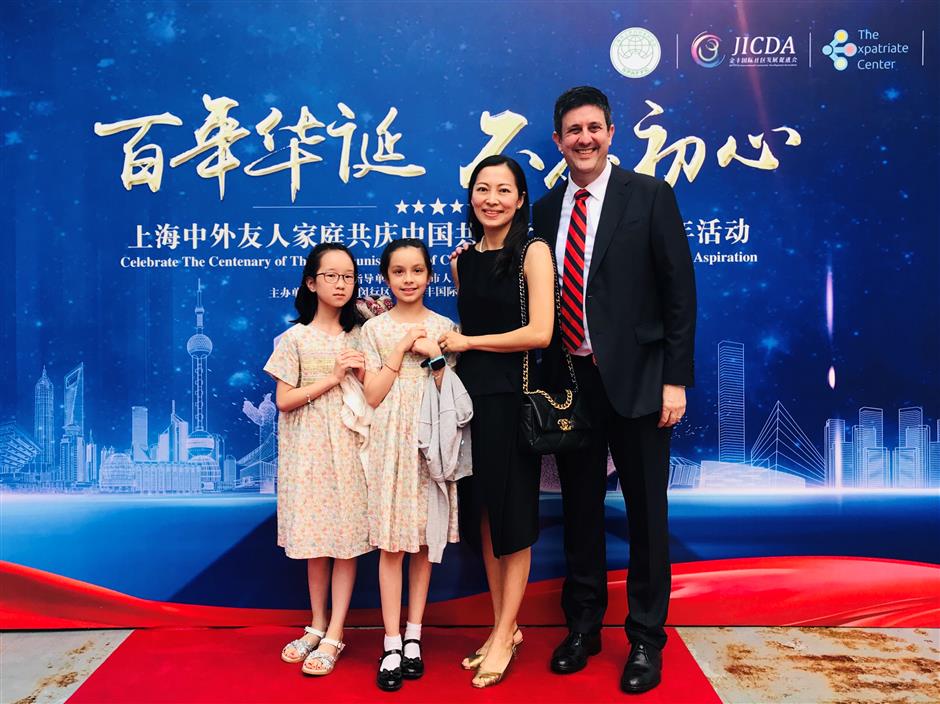 Justin O'Jack, chief representative of the University of Virginia China Office, attends the party with his wife, his daughter and his daughter's best friend (left).

As for the development he has witnessed in China, he said: "I'm really impressed with what the CPC has accomplished in a relatively short time, whether it's the development of the economy, the infrastructure, or transportation.

"When I first visited the Bund in April 1993 and looked across the river to Pudong, the Oriental Pearl TV Tower was still halfway under construction. Now look at this impressive skyline we see before us tonight. Then the city's first Metro line had not yet opened, and now we have 18 lines and the world's largest Metro network, which is truly astounding." 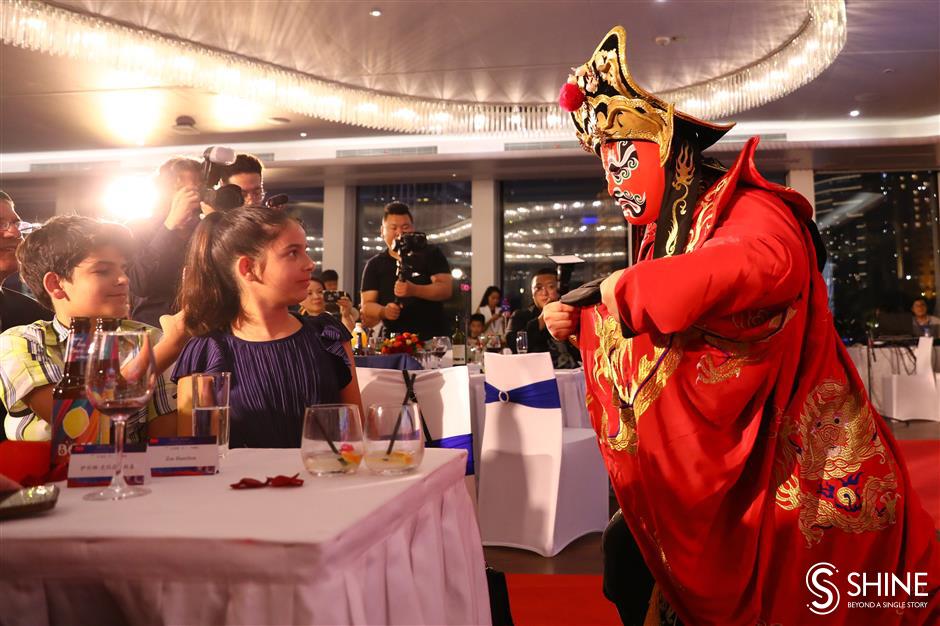 A Sichuan Opera is performed.

Karolina Pek, a music teacher at Shanghai American School, dressed up in qipao and performed Flamenco tango during the event.

Pek has been in Shanghai since 1996 and loves Chinese culture very much. She has 11 qipaos and wears them on special occasions, such as this Party centenary celebration.

"Shanghai has really changed a lot in the past 25 years," she said. "Before I first came here, I didn't know anything about China. I read a National Geography magazine my father had. I saw pictures of people on bicycles and in rain jackets. So I was really surprised when I came here and saw how lovely the people were in Shanghai, and also the history. The Chinese culture and the Chinese food are amazing.

"Over the years, a lot of things have changed. For example, in 2010 there was the World Expo, so there was a program to make the city very beautiful. Since then, the city has been booming and booming. Buildings were going up. There has been great city planning. And I'm really impressed how they handled the COVID-19 pandemic. It's really lovely to live here. I've seen Shanghai grow, so I feel it's my home." 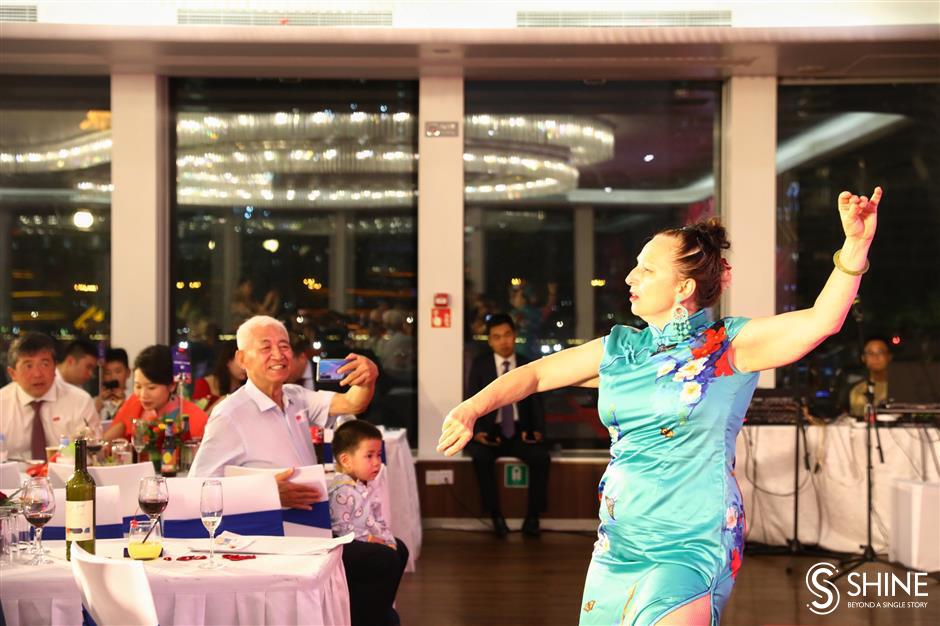 She said a boy helped her with using a shared bike the day before the party and said "welcome to Shanghai" to her.

Pek said she had read some books about the CPC and its history, and she planned to go to revolutionary museums later as her own celebration and learn a little bit more about China. 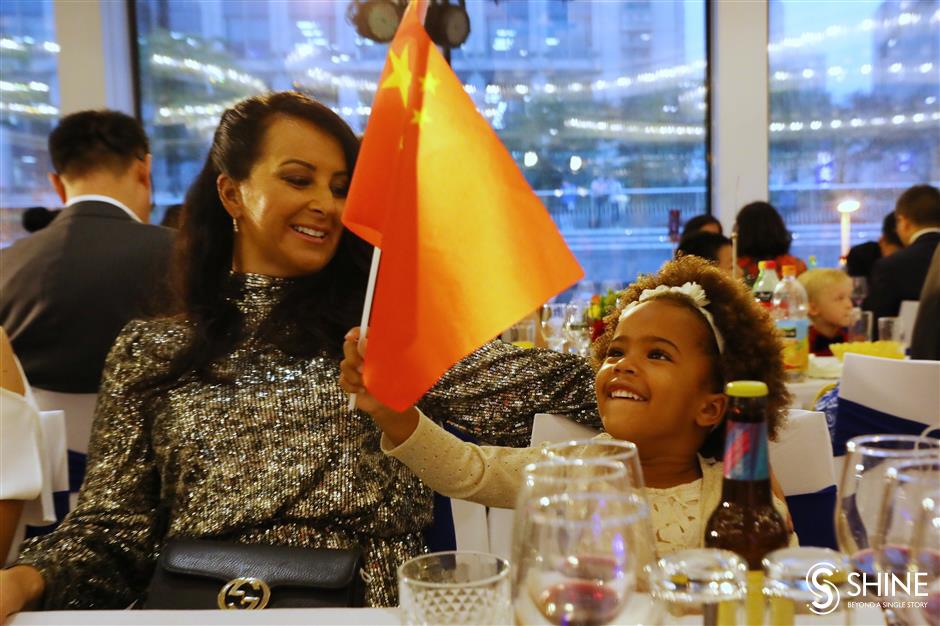