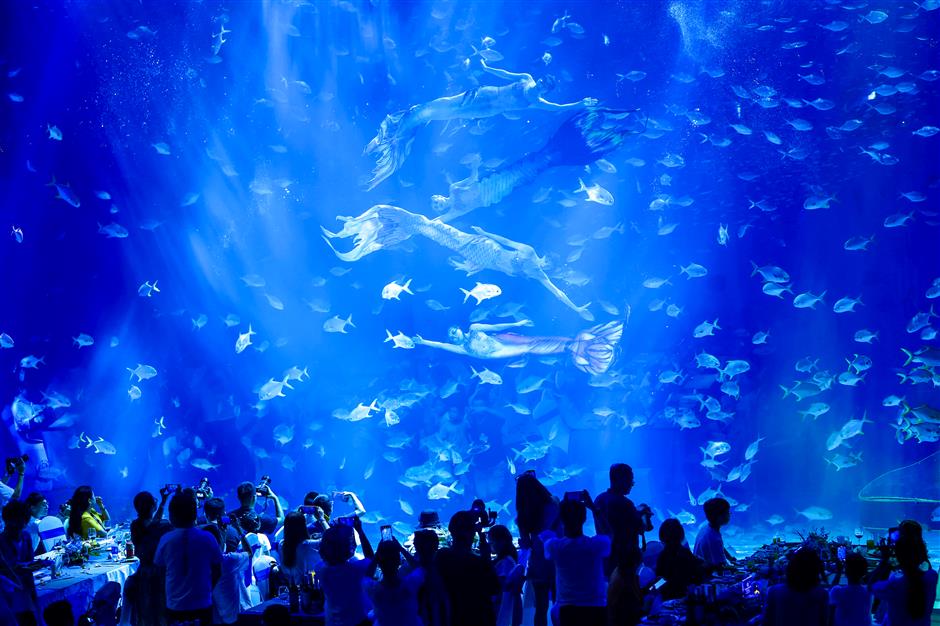 People on a night tour at Shanghai Haichang Ocean Park.

The travel site's users made 1.3 night tours on average between January and June, with average spending reaching 187 yuan (US$28.9) per capita, up 25 percent from the same period last year.

Women have shown a slightly higher preference for night tours than men, making up 53 percent of orders.

Luoyang, Shanghai, Shenzhen, Guangzhou and Xi'an have been this year's most popular night tour destinations.

Food, night views and light shows are some of the most alluring elements attracting night tourists, as well as theme parks, performances, ancient towns, night markets and city sightseeing.

Traditional tourist attractions such as Longmen Grottoes, Slender West Lake and Huangguoshu Waterfall are popular night tour scenic areas, with the launch of nighttime activities such as light shows.

Shanghai Haichang Ocean Park said night tours have boosted summer consumption in ticketing and its hotel's occupancy rate, which has grown more than 20 percent since its night session opened on June 11.

The park has launched a night tour package comprising a guided tour, an overnight stay at camps, light shows and float parades.

Locals accounted for nearly 50 percent of its night tourists, and more than 70 percent were between the ages of 21 and 35. The number of couples on dates visiting the park at night was 10 percent higher than during the daytime.