Shanghai lauded as 'a cradle for modern math education' 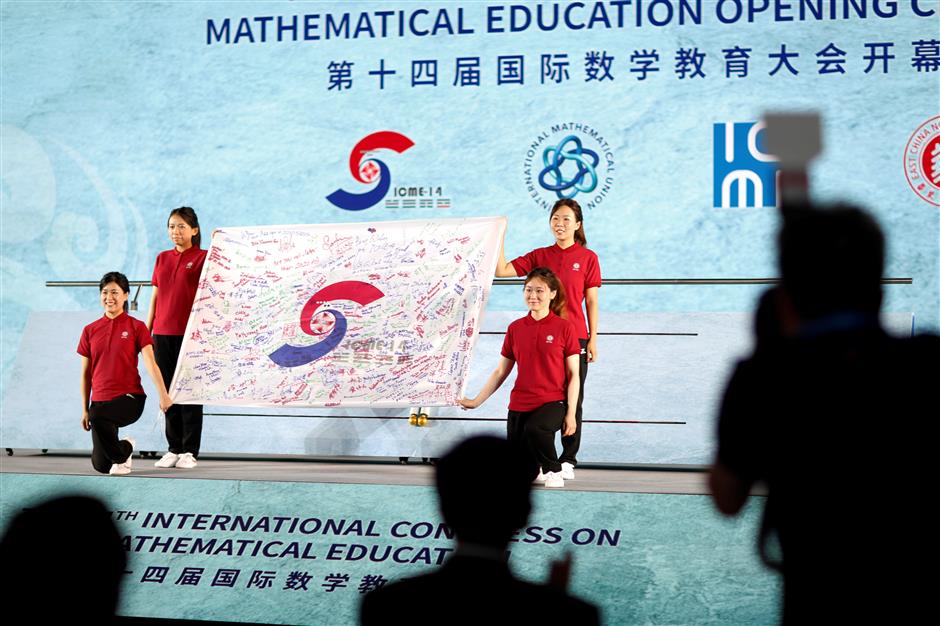 A flag with signatures of famous maths educators from around the world is showned at the 14th International Congress on Mathematical Education.

A flag with signatures of famous mathematics educators from around the world was displayed at Shanghai's East China Normal University on Monday night, kicking off the 14th International Congress on Mathematical Education.

It is the first time for the world's largest academic conference on maths education, held once every four years, to take place in China since it was initiated in 1969.

It was scheduled to be held at Shanghai Convention and Exhibition Center of International Sourcing from July 12 to 19 last year, but was postponed by a year due to the COVID-19 pandemic.

The seven-day conference will involve about 500 workshops and other activities with over 2,000 people, including mathematics educators, curriculum developers, mathematicians, researchers and resource producers, from 129 countries and regions attending online or offline.

At the opening ceremony held at the indoor stadium of East China Normal University on Monday night, Li Qiang, Party secretary of Shanghai, stressed in his speech the importance of mathematics in urban development.

He said mathematics, as the oldest and most active science of mankind, was a fulcrum and cornerstone for all other sciences.

"Nowadays, mathematics has been applied in all human activities as a leading driving force for a new round of reforms in science and technology as well as in industries," he said. "Shanghai is a window to international exchanges in mathematics, a cradle for modern mathematics education and a test land for innovation."

He pointed out that Shanghai is speeding up its efforts in the construction of "five centers," namely global centers for economy, finance, trade, shipping and science and technology innovation, and improving its capacity and core competitiveness.

"To achieve scientific and technological innovation and economic development, we need to pay more attention to the development of mathematics to enhance its support for urban development as a driving force," he said.

He said Shanghai will create a more flexible environment to encourage mathematicians dedicated in basic mathematical theory research and contribute more wisdom to expand the boundary of mankind's mathematical knowledge.

He called for innovation in math teaching approaches to enable young people to feel the charm of maths and develop expertise. He also called for the provision of solid support for the development of emerging industries, such as integrated circuits, biomedicine and artificial intelligence, and offering powerful momentum for the city's digital transformation with new mathematical theories, technologies and methods.

"I hope this conference will be an opportunity for all of us to hear the thoughts and wisdom of all guests, for all participating countries to exchange experiences in math education, for young scholars and students to get their enlightenment from the math masters," he said.

"I also hope it will help widen and deepen international cooperation in mathematics, making new contributions to science and technology innovation in the world and development of the civilization of mankind." 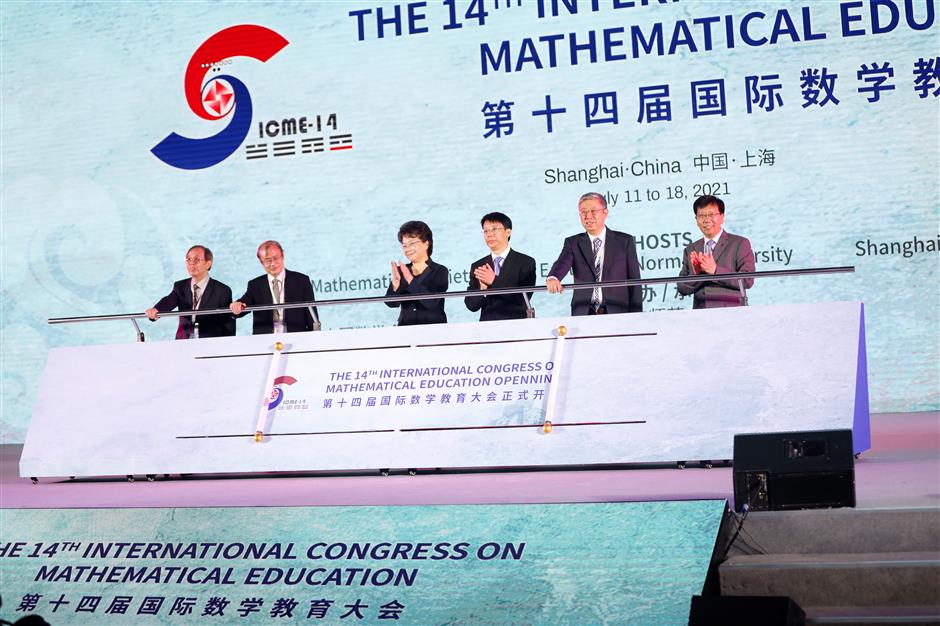 The 14th International Congress on Mathematical Education kicks off on Monday.

Carlos Kenig, president of the International Mathematical Union, said that research and education of mathematics shouldn't and couldn't be separated, therefore he wished mathematicians and math educators would keep close cooperation to benefit each other.

Frederick K. S. Leung, president of the International Commission on Mathematical Instruction and an endowed professor at the University of Hong Kong, said the conference has played an important role in promoting  excellence and tolerance in research and practices in mathematics education.

He said the diversity of cultures can enrich research and practice and people need to respect different cultural traditions.

Qian Xuhong, president of East China Normal University, welcomed all participants from around the world and said the university took the conference as an opportunity to further develop its mathematics education.

According to Qian, the university has a long history of math education and has made great contributions to it in China. "One Lesson One Exercise," the famous Shanghai math learning-aid book series, has gone beyond China and entered more than 400 British schools.

Top awards in mathematical education – the Klein Award, Freudenthal Award and Castelnuovo Award – were presented to outstanding educators and researchers during the conference opening ceremony.

French mathematician Cédric Villani, 2010 winner of the The Fields Award, delivered a plenary lecture on the topic of "Mathematics in Society" after the opening ceremony.

Gu Lingyuan, a Shanghai math teacher and professor at East China Normal University, has delivered a plenary lecture to introduce the famous 45-year math teaching reform led by him, known as the "Qingpu Experiment," to the audience.

Teachers and students from Shanghai High School will show the changes in math teaching and learning during the pandemic on Thursday.