Kuatang Bridge in Songjiang lights up for first time 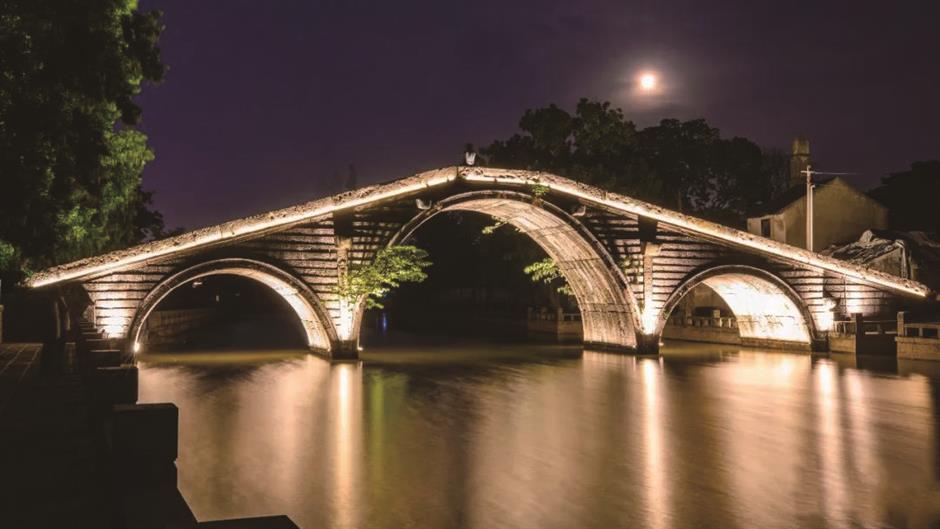 Decorative lights on Kuatang Bridge, nicknamed "Yunjian No. 1 Bridge" (Yunjian is another name for Songjiang), started to shine for the first time at 7pm on June 24.

The bridge, located in the Cangcheng historic and cultural zone, dates back to the Song Dynasty (960-1279). A scene featuring the Kuatang Bridge bathing in the light of a full moon with river water shimmering was selected as one of Songjiang's "Twelve Best Scenes" in 1998.

"The scene is phenomenally beautiful. The bridge, the moon, and the night sky of Cangcheng are all beautiful," said a resident surnamed Gu who was visiting the bridge.

The newly added decorative lights include LED strip lights on both sides of the bridge, LED wall washers on the bridge's arch and flood lights on the exterior of the bridge's piers. With deference to the bridge's historical value, not a single nail was used during the decorative process, according to the Yongfeng Community Cangcheng Old Town Development Office.

A trial lighting of the nearby Shihe Bridge will take place soon. At that point, three bridges, Kuatang, Dacang and Shihe, will form a brand-new scene of illumination to entertain both residents and tourists.