Local residents of 'paper building' to be relocated 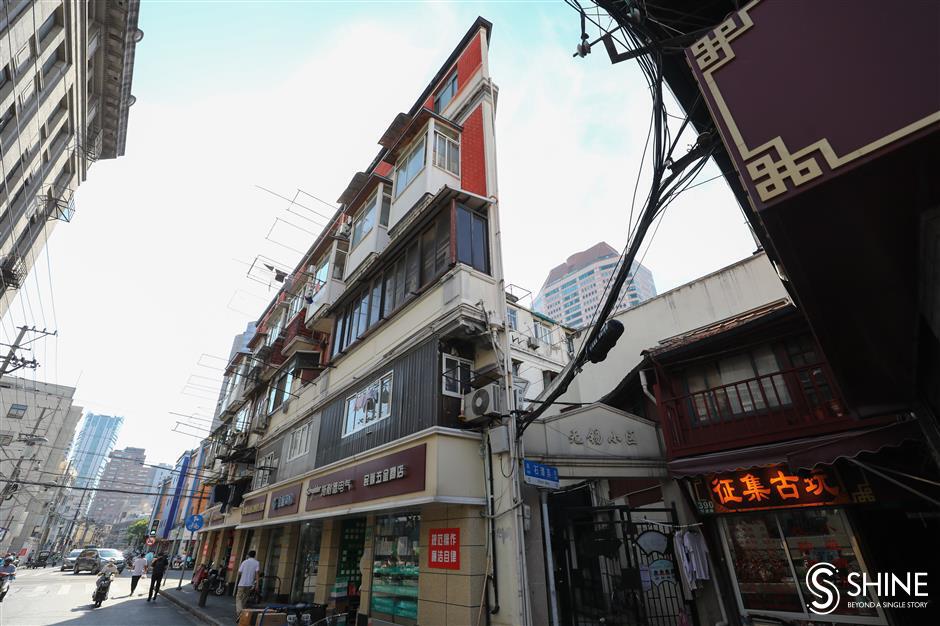 The "paper building" at 400 Ningbo Road in Huangpu District has become an Internet sensation.

Residents of an old building that hit the headlines for being "paper thin" in downtown Shanghai will be relocated, local authorities said on Wednesday.

They will move out along with those living in the nearby old neighborhood on the backstreet of Nanjing Road E.

The relocation campaign for the Fujian Road block in downtown Huangpu District has been initiated after over 99 percent of the residents agreed to get relocated with government subsidies, the district announced on Wednesday.

One of the last remaining massive derelict neighborhoods near the Bund attracts public attention mainly due to the peculiar apartment building, which has been dubbed the "thinnest building in the world" by a UK tabloid newspaper the Daily Mail in 2019.

An expert panel has been appointed to evaluate the historical values of the buildings, including the "paper building," after all the residents move out. If found to be valuable, the structures will be preserved and renovated for other uses, according to the district government.

The poor living condition of the residents and those around the neighboring old lane-style houses have also attracted wide media coverage. The residents have been struggling for decades, with no private kitchens and gas supply.

The building was built in the 1920s in the Wuxi Community, an old neighborhood with rows of shikumen (stone gate) and old apartment buildings. It sits on the corner of Ningbo Road and Fujian Road M., a few steps from the Bund and Nanjing Road Pedestrian Mall.

Over 40 households live in the four-story building. Some are still using chamber pots and cooking in the corridors. Electrical wiring on the walls is covered in black oil and dust.

The average living space is about 15 square meters per person.

The structure was initially built as offices, so there were no gas or toilet facilities. The narrow corridors on each floor are occupied by storage cabinets, stoves and liquid gas tanks. 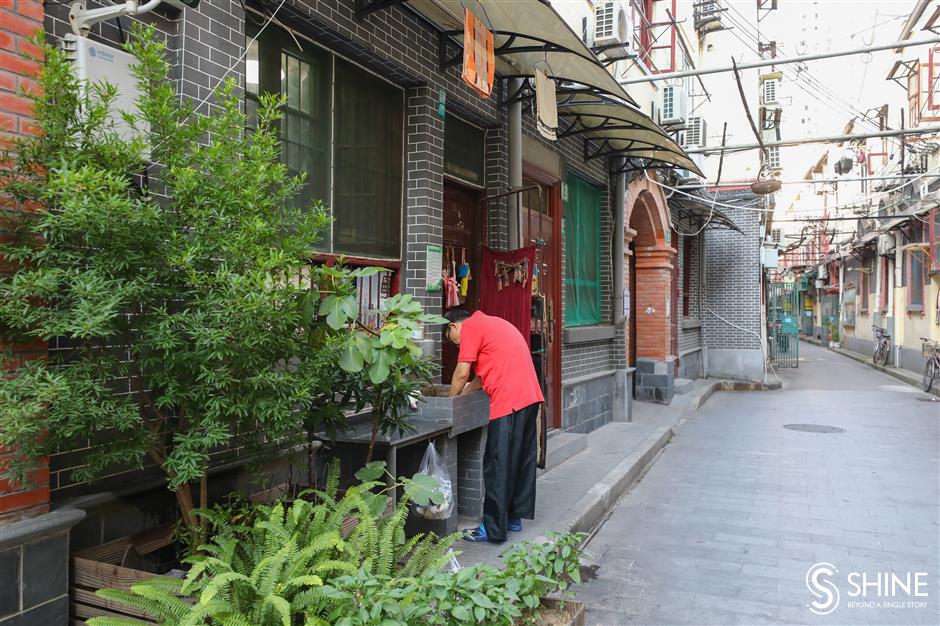 A resident washes vegetable at a sink installed outside of the apartment.

While most residents are happy to finally get rid of the cramped quarters, some are reluctant to leave due to the ideal downtown location and good relationship with old neighbors.

A 61-year-old resident surnamed Zhang has been living in the neighborhood for over three decades. She lives in a 25-square-meter room with her husband and daughter. The family built a small loft and spared a part of the limited living space for a bathroom and kitchen covering about 5 square meters.

"Although we don't have a commodious house, my husband and I conduct a lot of decorating to improve the life quality," Zhang said. "I'm reluctant to be apart with the flowers and plants, as well as my lovely little house," she said.

Zhang's neighbor surnamed Li said she had built a close relationship with neighbors.

Li, 70, has been living in a house with a loft with her husband and daughter for three decades. 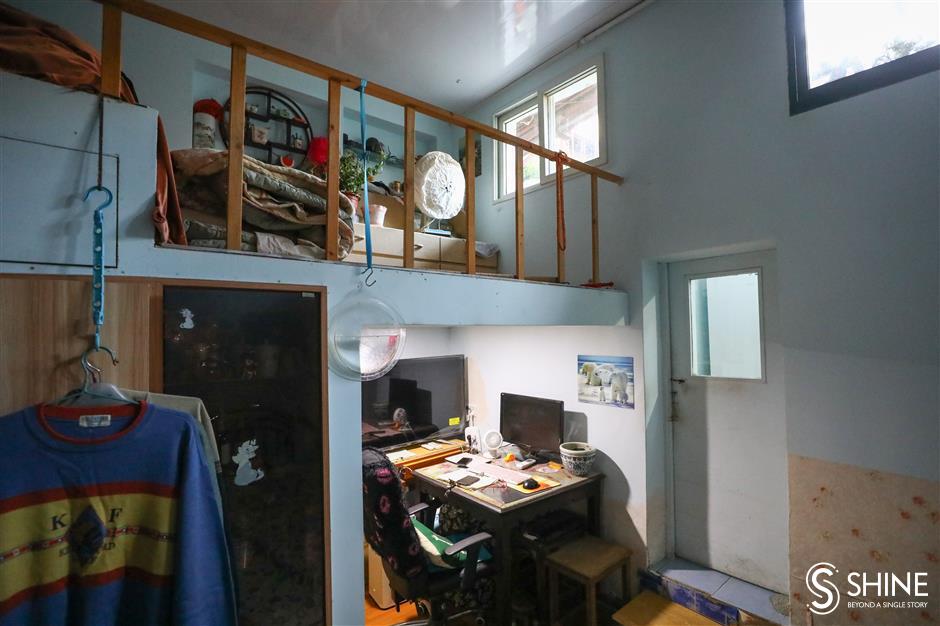 A crammed quarter at the Wuxi Community. 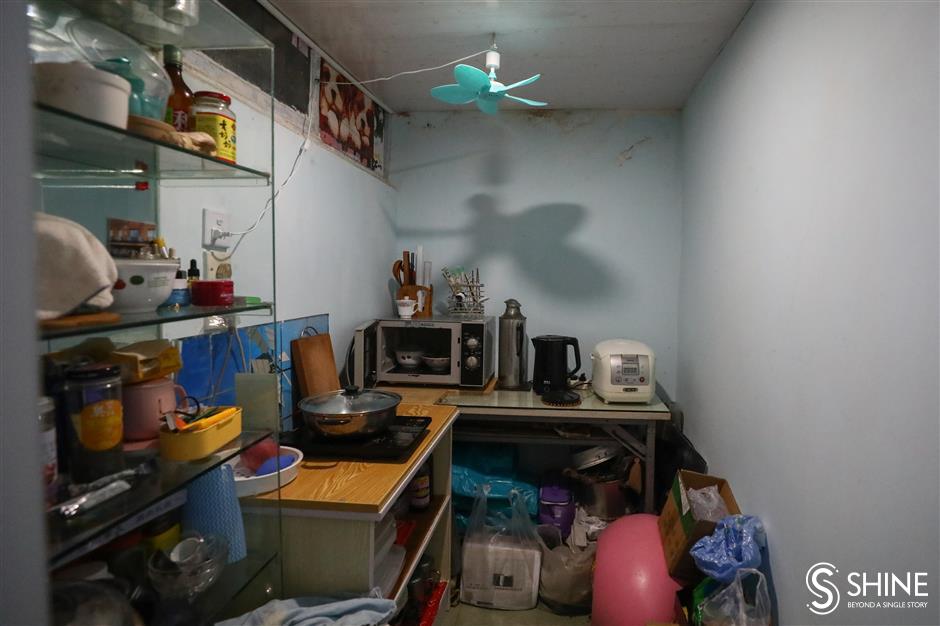 A small kitchen-cum-living room in the building.

Before the relocation was launched, the neighborhood committee officials and volunteers had spared no effort to help improve the residents' living conditions, not only in this building but also in the other old residential houses under its jurisdiction. Some 1,600 households live in the area, with 30 percent of them elderly.

The committee has launched many campaigns aimed at improving the environment. Several illegally built balconies on the building, for instance, were demolished, while indoor bathrooms have been installed.

The area in eight downtown regions, including those on Xiamen, Fuzhou and Dongjiadu roads and Jianguo Road E., will be reclaimed by the district government for historical preservation or future development.

Most of the buildings were built over a century ago and pose fire and other safety risks. About 70 percent of fire incidents in Huangpu last year were in the old neighborhoods.

A shared kitchen at the community. 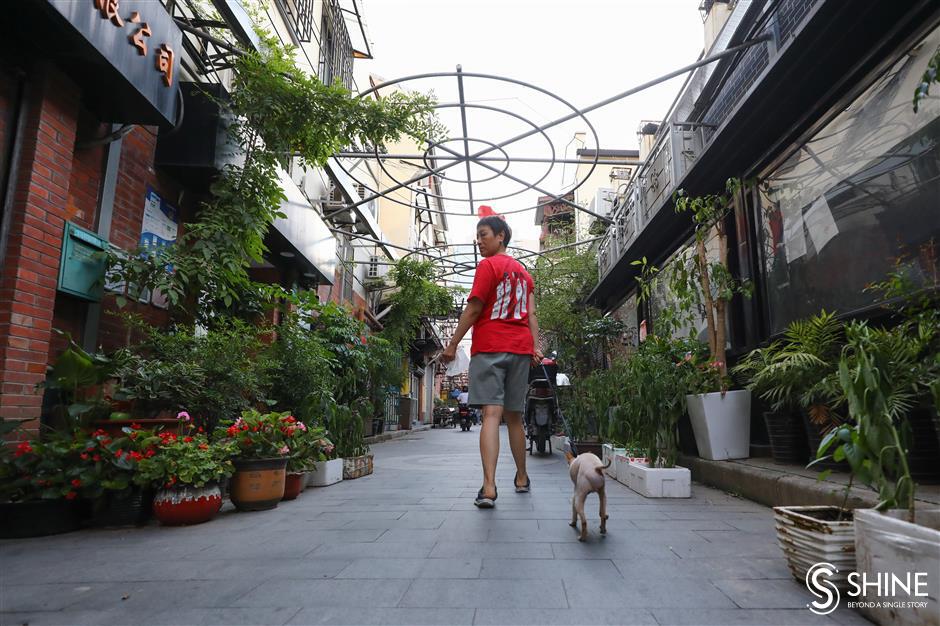 The neighborhood is decorated with plants and flowers despite the poor living condition.