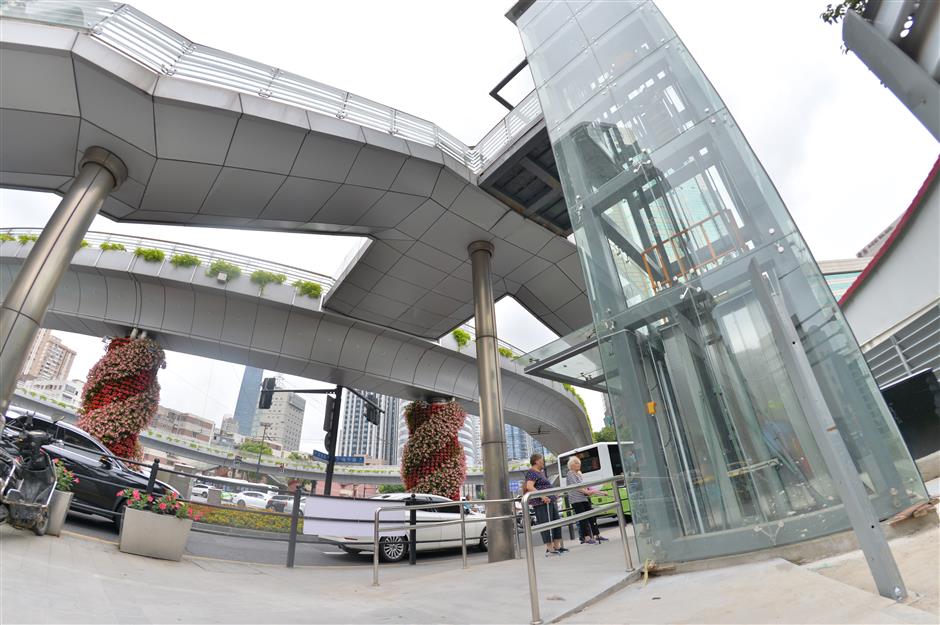 One of the new elevators of the pedestrian bridge at the intersection of Wusong and Haining roads.

Where Wusong Road meets Haining Road, both large streets with 11 lanes, people used to cross the streets only by walking up and down the three-story pedestrian bridge.

Now they can use elevators.

The elevators provide great convenience for senior residents at nearby residential complexes and for patients of Shanghai General Hospital which is at one corner of the intersection.

Police in Hongkou District, where the intersection is located, said on Wednesday that the solution was long called for and the result was achieved with support of the government and local communities.

The bridge was built in 1999, and with the development of this area over the years, there are now seven bus stations with about 30 buses around the crossroads.

Apart from inconvenience to pedestrians, the former bridge with only steps also drove some people to take the risk of crossing the streets down, which has caused several traffic accidents, according to police.

The construction of the elevators was not as easy as it might seem, because it involved claiming space from the communities around it.

Businesses affected by the construction readily gave up some space and the hospital aligned its new clinics with the elevators so patients only have to walk 20 meters.

So far, two of the four planned elevators are in use. The others are still under construction.

Granny Li, a resident of Dongxing residential complex, at the southeast corner of the intersection, said the elevators save her hard climbs up and down the bridge or a detour of 1 kilometer.

"Now it's more convenient for me to do grocery shopping in the market on Zhapu Road," she said.