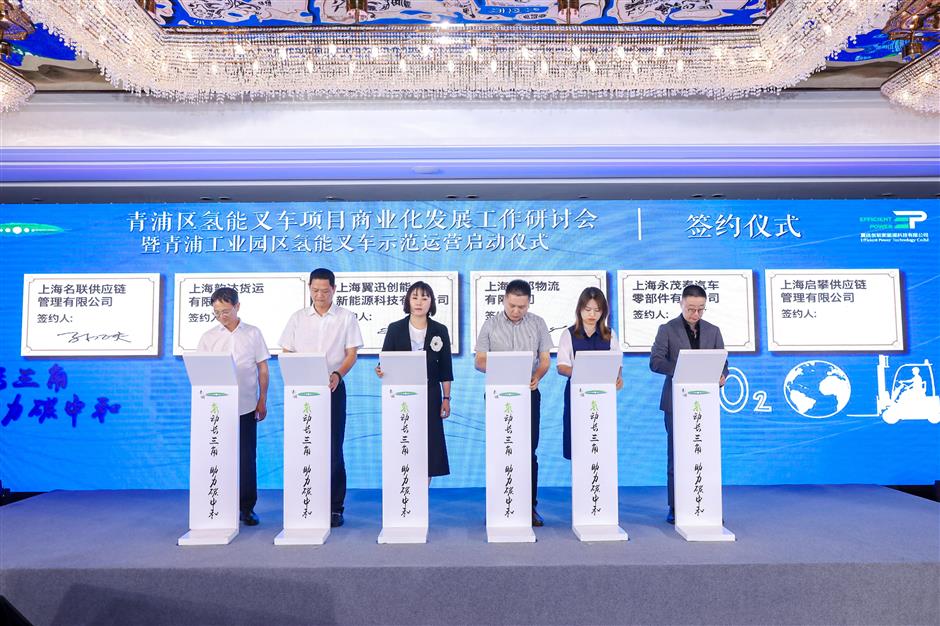 A number of cooperation agreements on hydrogen energy development are signed in Qingpu District on Thursday.

Qingpu District is delivering a boost to the nation's carbon neutrality initiative with the launch of a hydrogen fuel cell forklift demonstration and operation project.

The project will be based at Qingpu District Industrial Zone, where a hydrogen fuel industrial park covering 2.4 square kilometers will be built, authorities announced on Thursday.

The park will feature businesses dealing with hydrogen energy production, storage and transportation, and fuel tank vehicles and will become a landmark in the development of the hydrogen energy industry.

In China, hydrogen fuel battery vehicles are in the start-up stage and are mainly used in public transport areas, but the industry has huge development potential, said experts.

It also has a number of big logistics companies with broad applications for such forklifts.

A hydrogen energy forklift industry chain relying on port, logistics, and cold-chain storage will be established in the district, offering extended digital services such as robots and unmanned aerial vehicles.

"The application of hydrogen energy is a must to create a clean and low-carbon environment," said Ni Xiangjun, deputy director of Qingpu.

It is estimated that the annual revenue of the district's hydrogen energy industry chain will surpass 7 billion yuan (US$108 million) by 2022.

The plan for a "5G-plus hydrogen energy" big data platform will be worked out, and three to five companies in the field will be cultivated in the district as of 2022, according to the blueprint.

More than five hydrogen refueling stations will be built by that time, and there will be at least 500 hydrogen energy-powered vehicles in operation.

It is estimated that hydrogen energy will cut world emissions of carbon dioxide by 6 billion tons by 2050.