The curtain has come down on the 2021 "Young Voice, China Story" event, an English-speaking contest held over three months that attracted nearly 20,000 students to Shanghai.

Although only in its first year, it attracted a lot of attention in providing an outlet for students to display their English talents and showcase their veneration of China to the world. 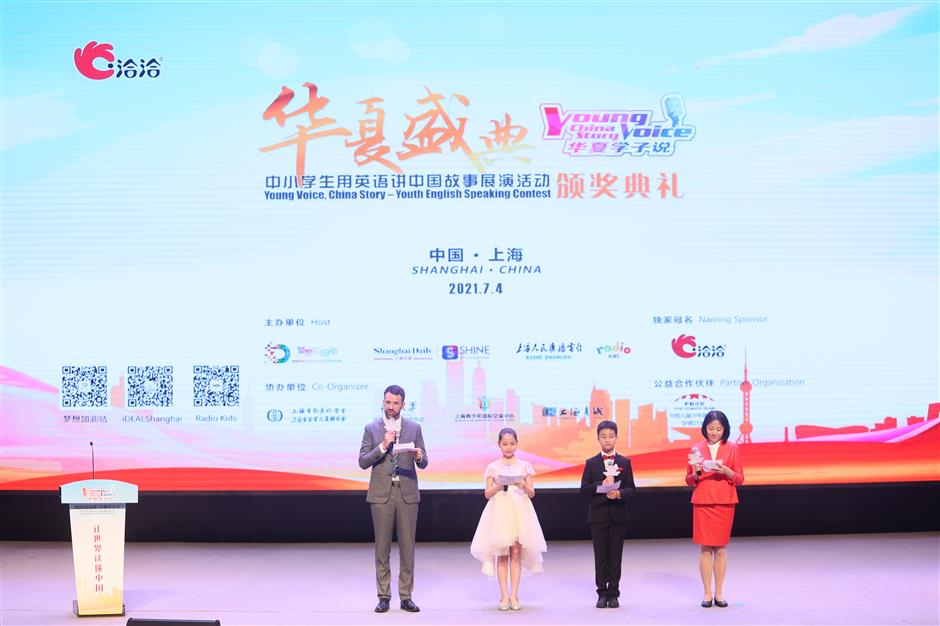 The awards ceremony of the 2021 "Young Voice, China Story" event in Shanghai 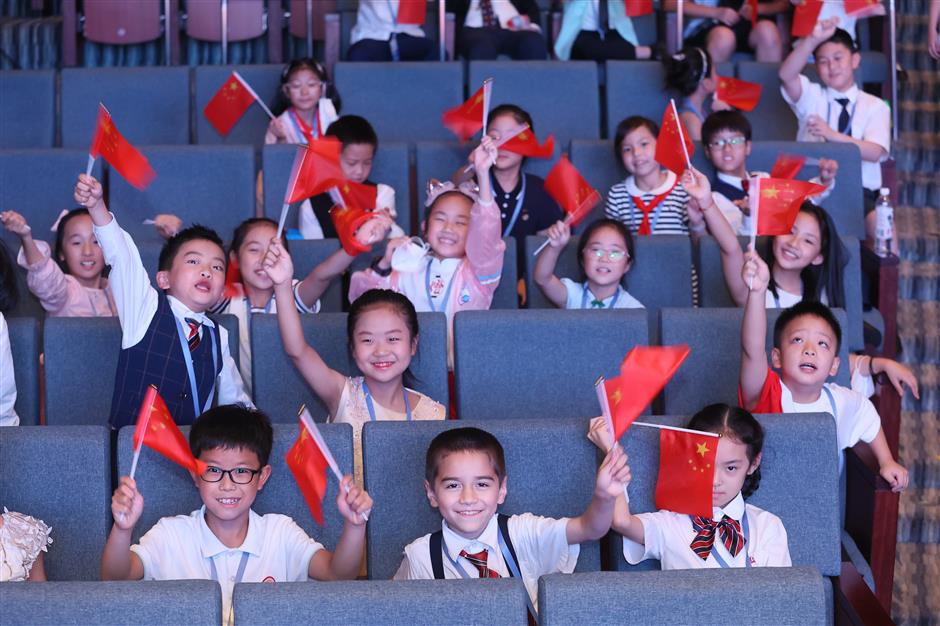 The participants, ranging in ages from 6 to 18, are from more than 120 schools in the Yangtze River Delta and Yunnan-Guizhou-Sichuan areas.

"Young Voice, China Story" encouraged participants to tell China stories according to their different age groups. They spoke to the topics of "This Is Me," "Changes In My City," "If I Had A Time Machine" and "A Word That Has Changed The World." 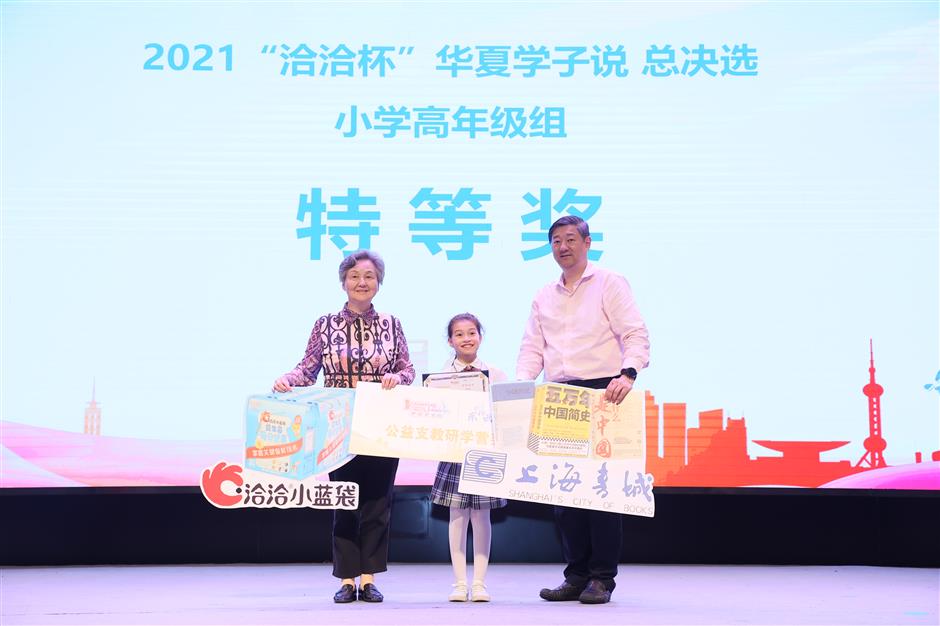 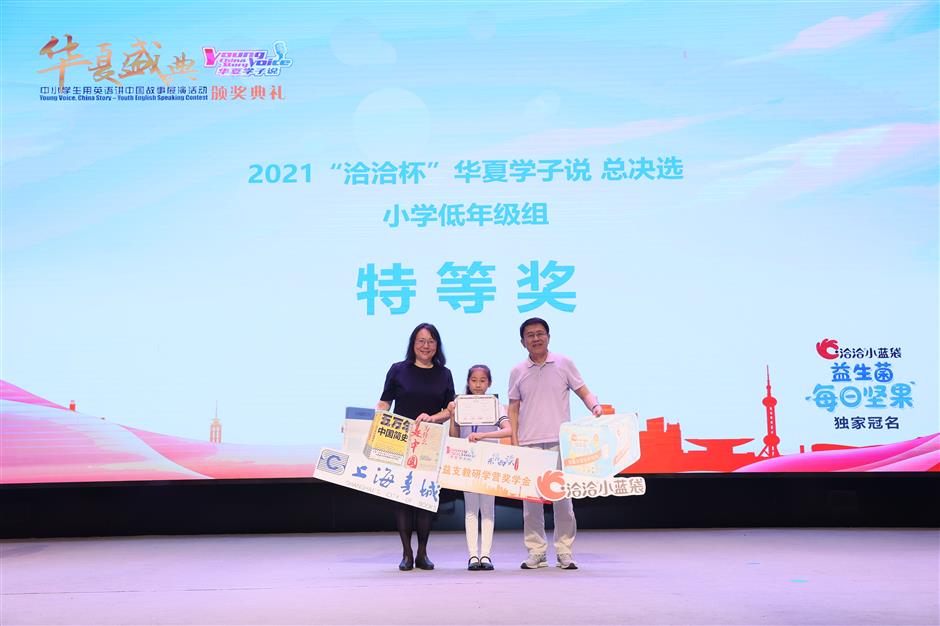 Participant Zou, from Shanghai Pinghe Bilingual School, said he would like to meet Marco Polo (1254-1324) if he had a time machine.

Polo was a Venetian merchant traveler and the first European to write a detailed chronicle of his experiences in China. It is said that he brought China's nang, a kind of bread made by Uygur people, to the West, and it later evolved to become today's pizza.

"I would like to hear from Polo whether it was true or not," said Zou, a pizza fan.

Zou said the competition inspired him to think of the best aspects of Chinese food, fusion and inclusiveness, as pretty much like Chinese philosophy. "Food provides a perfect introduction to Chinese culture. Everyone loves eating," he said.

Zou and another winner Zhang Yahan were voted as "ambassadors" for the event due to their outstanding performances.

"China has such a long and rich history but there is some bias toward it. I want to tell China stories in foreign languages, and let the world know about a true China," Zou said.

"The best way is to use their languages to communicate with them. I hope China's young generation can be heard on the global stage." 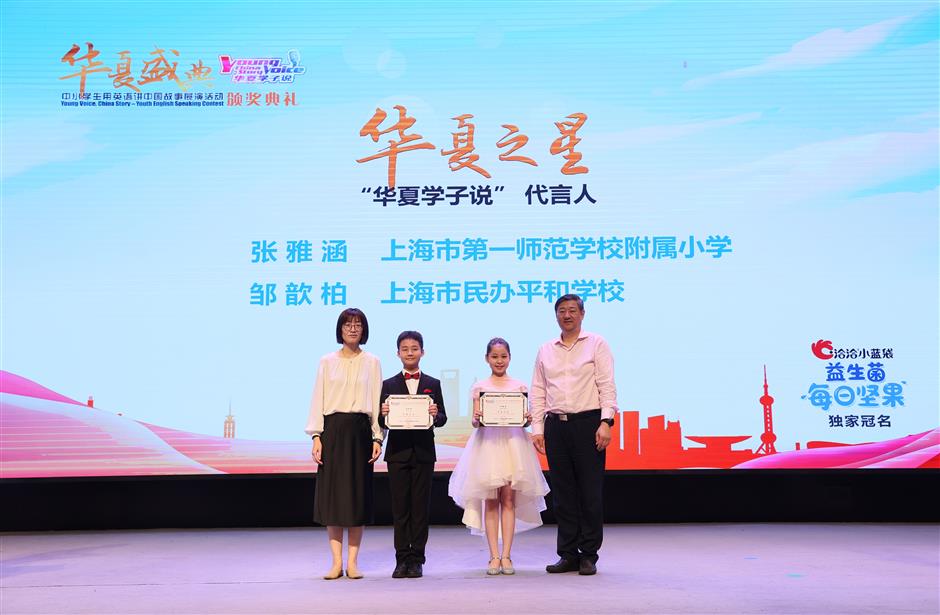 Young boy Zou Xinbo and girl Zhang Yahan are voted as "ambassadors" for the event.

Zhang said she hadn't expected to receive such an honor, but she could feel its weight.

"The 'Young Voice, China Story' has inspired us to feel the changes around us as well as China's venerable history and culture. It's our responsibility to tell China stories to the world from our own perspectives," she said.

She agreed with Zou's view of introducing China's culture starting with food.

"I would like to tell something about China's tea culture to foreign children if I have the chance," she said.

"It's pretty Chinese, and it is a culture deeply rooted in my grandfather's hometown of Yixing. There, almost every family has a zisha (purple clay) teapot, and so do I," she said.

"Also, I love drinking tea. I think it can be popular overseas as well." 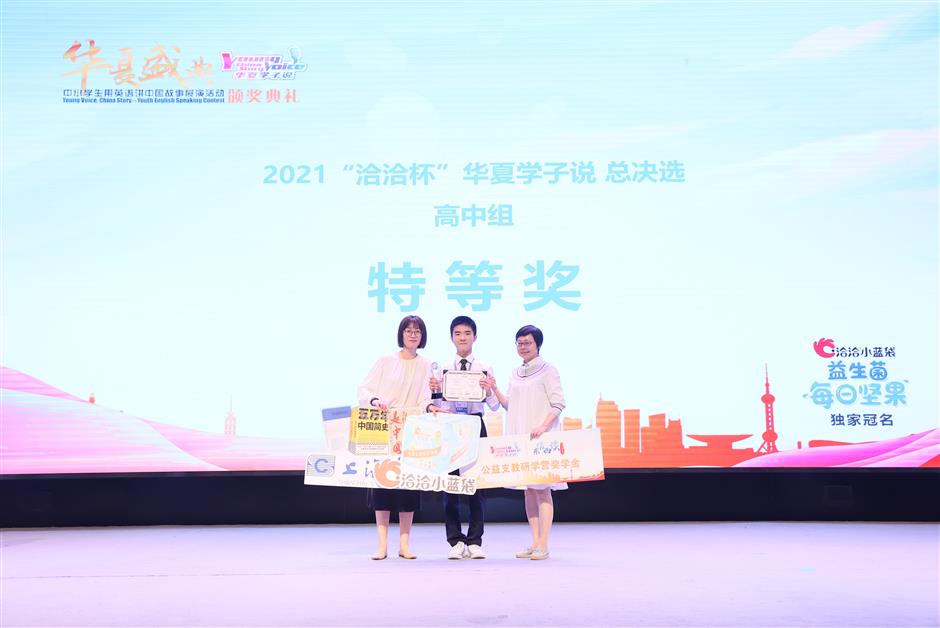 "Potato chips, for instance, is a typical Western snack, and we hope to leave an impression that guazi, or dried melon seeds, is a synonymous Chinese snack," he said. "Now, the world knows toufu and kung fu. Maybe someday they will know guazi."

During the competition, the company provided probiotic snacks, health-care lectures and interactive games for participants. "We hope these snacks can relieve their tension, and we also hope they can learn more about a healthy diet," he said.

According to Shanghai Dream+, the event was held for anyone who is interested in China's history and culture, regardless of their nationality or ethnicity or wherever they come from. It was inclusive and multicultural, the same shape of today's vibrant China. 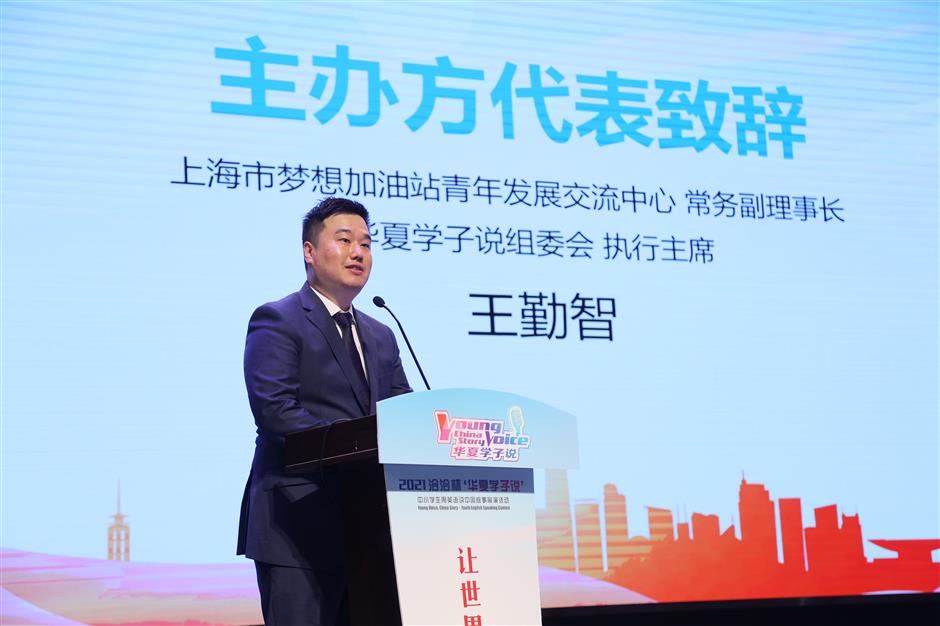 "Young Voice, China Story" not only involved participants from Hong Kong, Macau and foreign countries, it also attracted students from ethnic minorities in remote areas paired with Shanghai in the poverty alleviation program. In this way it smashed the stereotypical image of there being little access to English education in poverty-stricken areas.

Access to education resources is greatly improving throughout China and the world has opened up to more rural children who are learning English at a young age.

A winner in the competition is Zhang Zixin from the No. 6 Middle School in Jianshui County, Yunnan Province. He performed "We Are The People," the official song of UEFA Euro 2021, at the closing ceremony.

Wang Qinzhi, executive vice chairman of Shanghai Dream+, said as China is moving closer to the world's center stage, there was an increasing need to tell true, vivid and dynamic China stories in international languages.

"We hope participants can become ambassadors for Chinese culture and spread it around the world. I also hope the world can see a truly dynamic China with a diverse culture and interesting stories," he said. 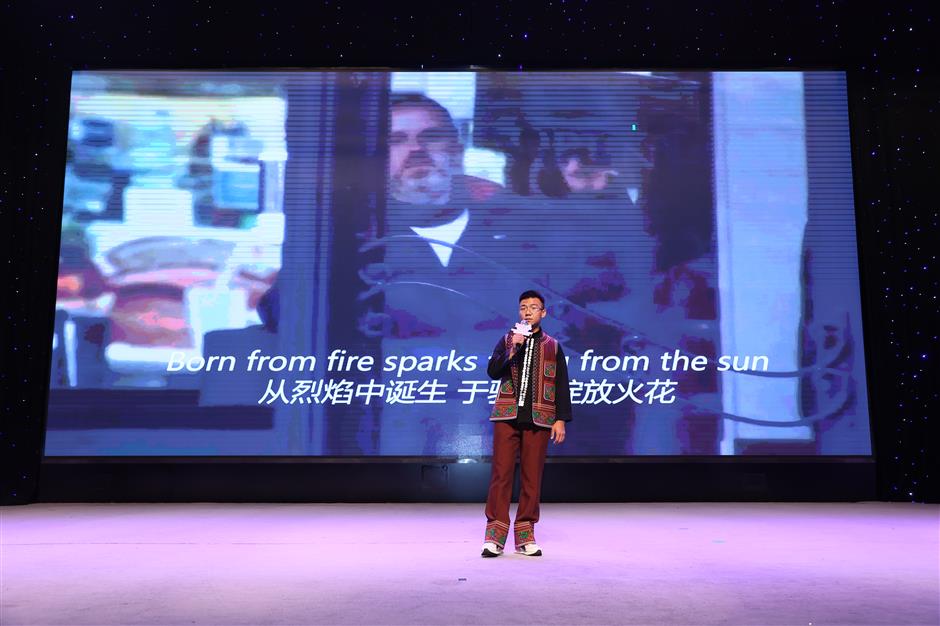 Zhang Zixin, from the No. 6 Middle School in Jianshui County, Yunnan Province, performs "We Are The People" at the closing ceremony.

Liu Qi, deputy editor-in-chief of Shanghai Daily, said the company has always been devoted to providing a platform for teenagers to show themselves to the world and encouraging them to use international languages to tell China stories.

"I hope teenagers can take it as their responsibility to tell China stories better and farther," she said.

Wu Guanjun, vice chairman of Shanghai Overseas Returned Scholars Association, said telling stories is one of the best ways to do international communication.

"This event was held to tell stories about Chinese culture, legends, the vision of the Chinese Dream, and China's peaceful development," he said. "It has opened up a window on China to the world, showcasing the country's development in recent years."

"I hope China's teenagers in the new era shoulder the responsibility and achieve greater rejuvenation of the Chinese nation," she said.

Of the participating schools, Baoshan District Experimental Primary School sent more than 1,000 students, seven of whom entered the final.

"Their speeches about their hometowns and dreams are full of emotion," said headmaster Su Huaping. "Just as renowned sculptor Auguste Rodin said: 'In short, beauty is everywhere. It is not that she is lacking to our eye, but our eyes which fail to perceive her. Beauty is character and expression.'

"From this event, students found they can better perceive the beauty," Su said. 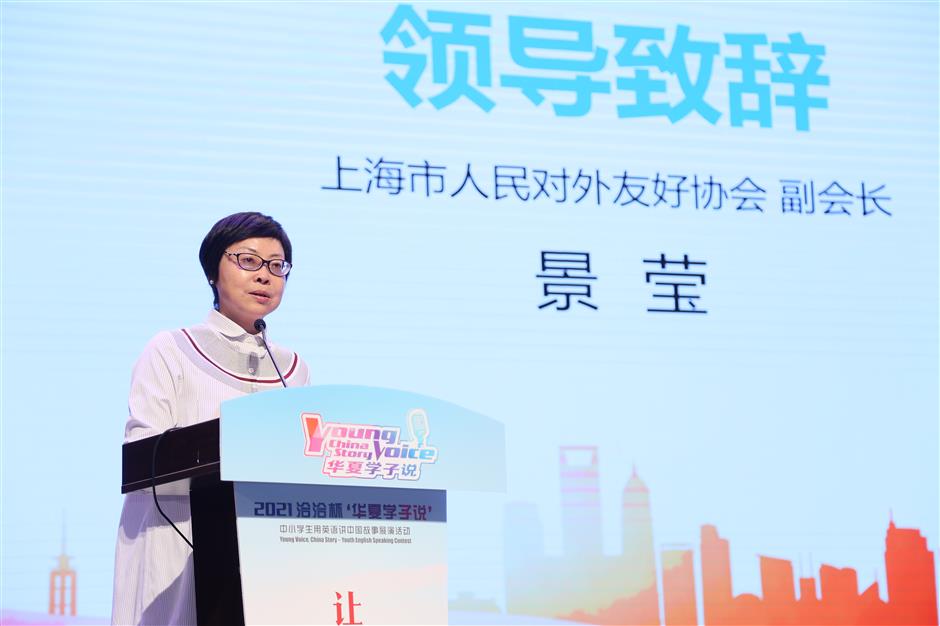 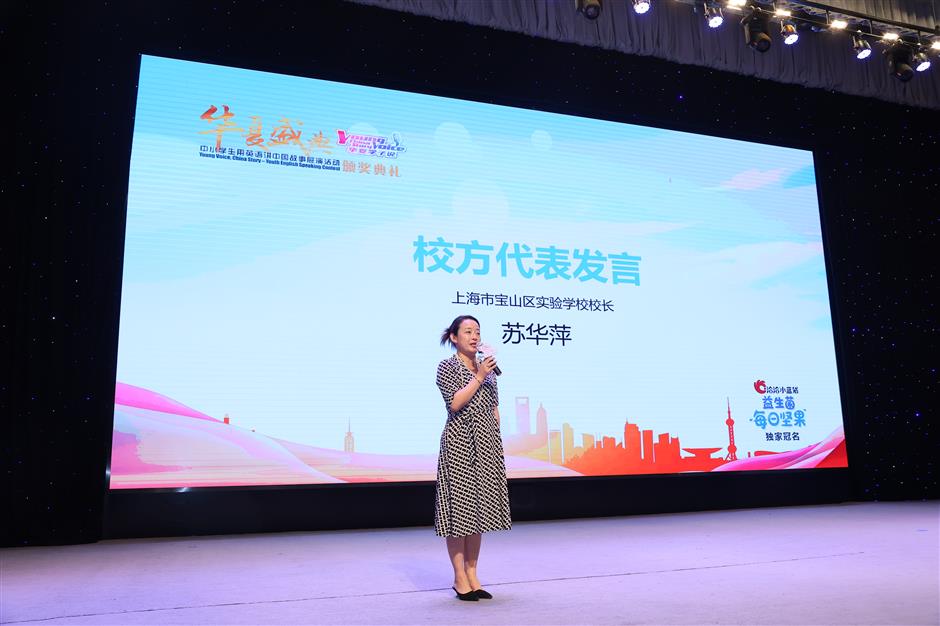 "We're very honored to be the title sponsor of this event, and we are surprised to see so many amazing China stories," he said.

"Previously, we focused more on helping farmers, such as building sunflower farms in poverty-stricken areas in Xinjiang, Gansu and Inner Mongolia. It's the first event that we have come so close to students," he said.

"The event has brought in both students from developed and less-developed areas, which has created very effective communication."

Wang Qinzhi from Shanghai Dream+ said "Young Voice, China Story" is sure to be held year after year.

"We will learn from this year's experience and help students grow to become better storytellers," he said. "We also plan to use the means of short videos or publications to better spread these China stories."

Meanwhile, Shanghai Dream+ has also launched this year's summer camp in Jianshui County, Yunnan Province. It's not simply an escape from the bustling concrete jungle. Instead, it offers a chance for urban children to make friends with their peers in rural Jianshui.

"Local children will show their urban counterparts around the farmlands, teach them how to distinguish different mushrooms and enjoy local folk dances. At the same time children from urban areas can tell their local peers what a metropolis looks like, and what they have learnt from textbooks," Wang said.