Shanghai Astronomy Museum opens to the public with big bang 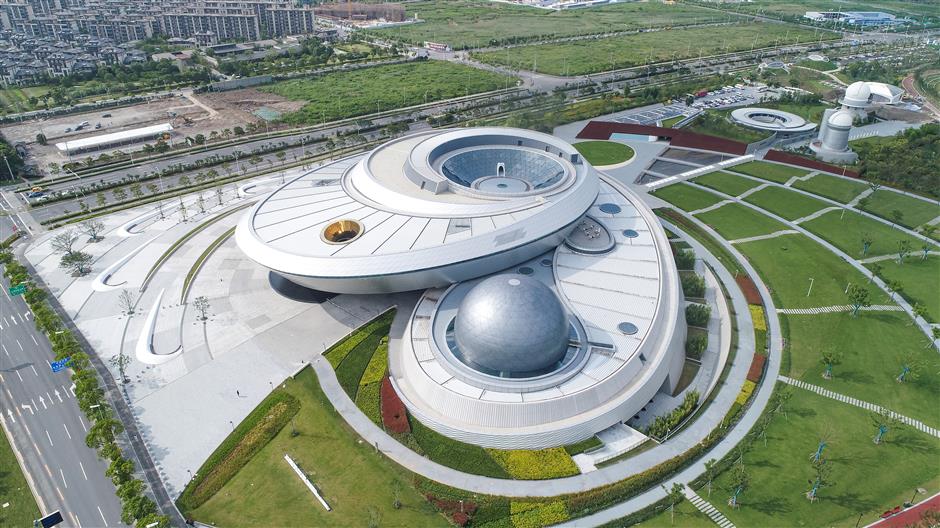 A bird's-eye view of the main building of the Shanghai Astronomy Museum. 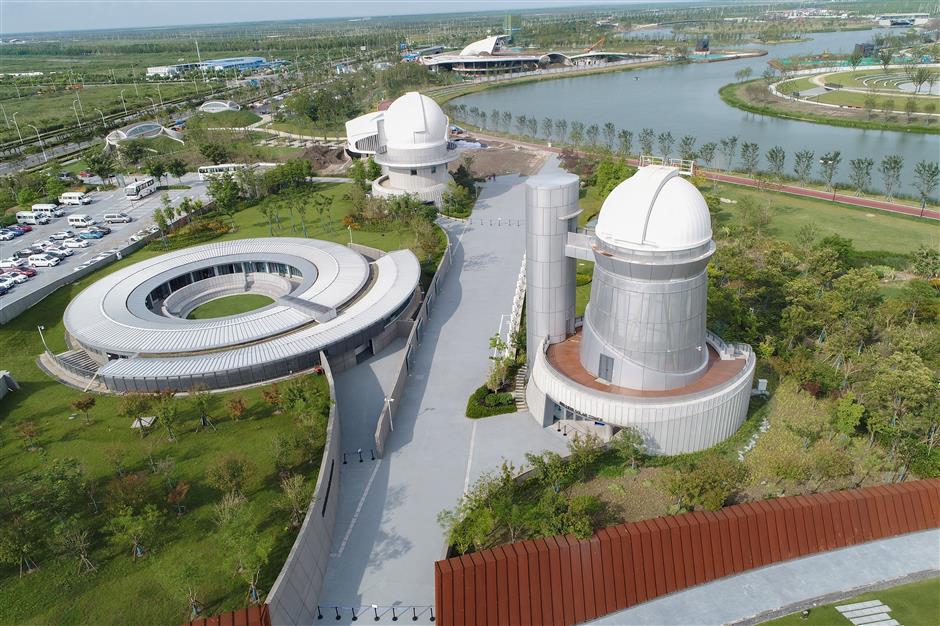 The solar tower and 1-meter-diameter telescope.

The world's largest planetarium opened its doors to the public on Sunday.

There was a scramble to get tickets to the Shanghai Astronomy Museum. As soon as online reservation opened, tickets for the first week soon sold out.

The first 5,828 visitors joyfully made their way for the long-awaited visits to the museum on Sunday. Of them, Mao Yiwen, 18, arrived around 7:30am, two hours before the opening, becoming the first to enter the museum.

"I'm so excited, I couldn't wait to experience it by myself," he said.

Mao just finished this year's college entrance exams in Shanghai. He got the ticket from the online ticketing system at 12:30am last Monday.

He was looking forward to seeing the 1-meter-diameter telescope, China's largest optical telescope for both astronomical research and science education, as well as the Foucault pendulum, a device named after French physicist Léon Foucault to demonstrate the Earth's rotation.

Ninety-four-year-old Ye Shuhua, China's first female observatory director, was among the scientists who proposed and took part in the construction of the museum.

"The complex is so beautiful," she said, after touring around the museum on Saturday. "We had been worried whether there would be visitors because it was built so far from downtown. But, today, you see, Lingang has developed so well.

"I hope it would be a place attractive to all kinds of people. Even those who know little about astronomy can benefit from a visit." 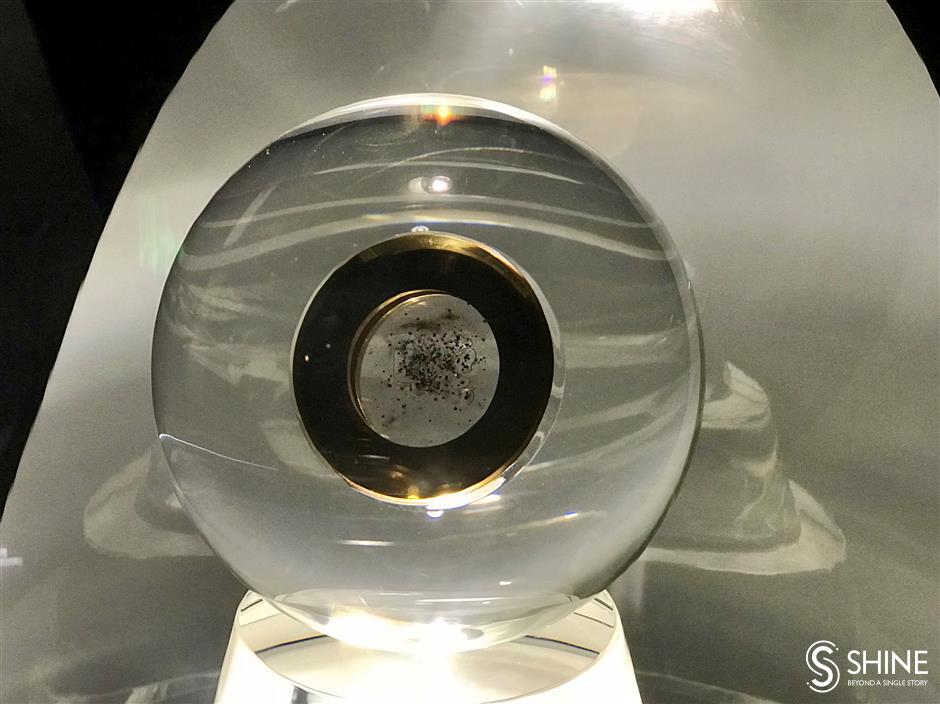 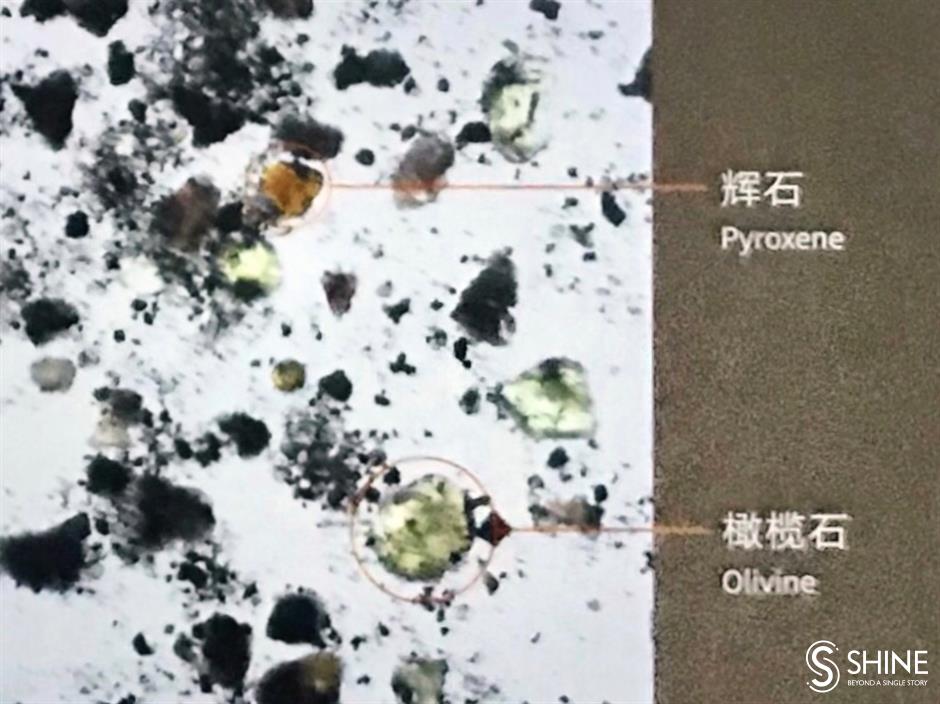 Many mineral grains can be seen in the sample.

Of the exhibits, Lunar sample No. 007, revealed at Saturday's opening ceremony, is no doubt the "star."

The sample, provided by the China National Space Administration, is displayed inside a crystal ball on the second floor. It weighs 9 milligrams. It was retrieved from Oceanus Procellarum on the lunar surface by the Chang'e 5 probe in December 2020.

Many mineral grains can be seen in the sample, including yellow olivine, brownish-red pyroxene and many impact-melted glass particles. Its study will help scientists to understand more about the origin and evolutionary history of the moon.

The solar tower of the museum also opened to the public on Sunday.

It allows visitors to observe high-definition images of sunspots, solar flares and solar prominences through professional optical devices. Looking through a telescope one meter in diameter, people can enjoy beautiful views of the heavens. 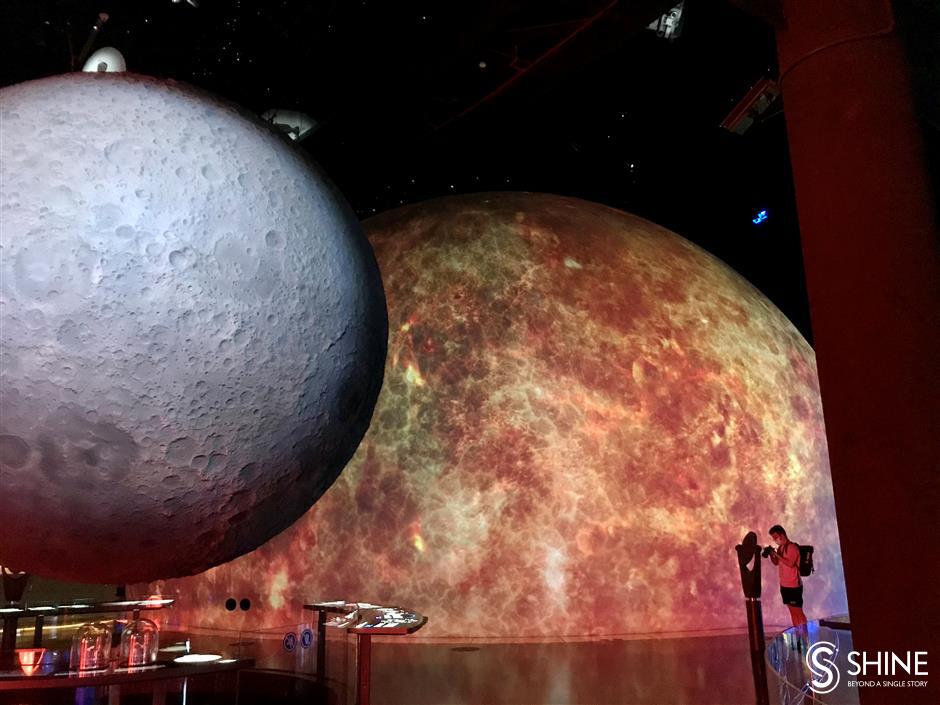 The Earth and the Moon. 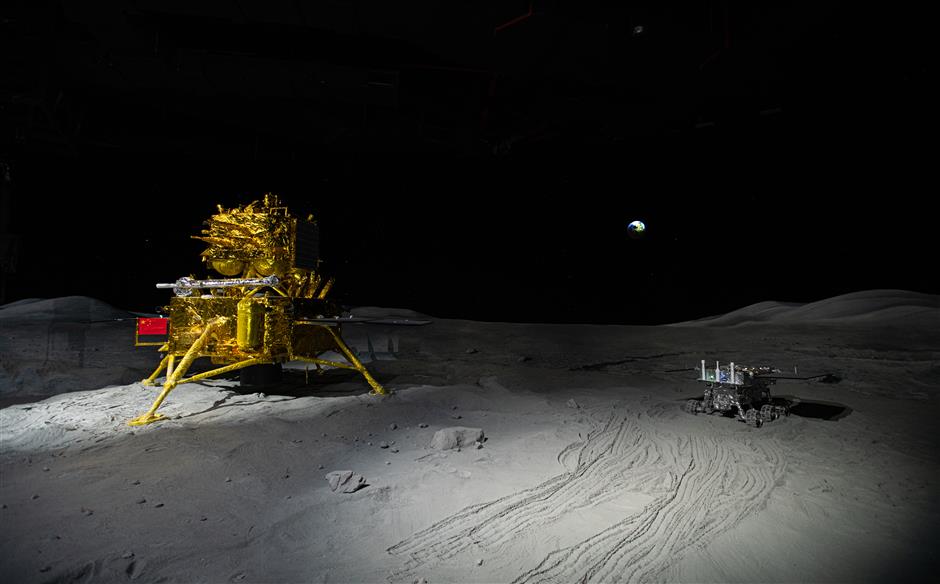 A re-enactment of how Chang'e-5 and Yutu work on the surface of the moon.

The exhibition is mainly divided into three zones – "Home," "Cosmos" and "Odyssey" – to lead visitors on a tour around the solar system, faraway galaxies and even black holes, and to understand the history of astronomy and inspire people to think about its future.

There are so many exhibits to see, from meteorites from the moon, Mars and Vesta, to original works of Isaac Newton, Galileo Galilei and Johannes Kepler. And there are so many to experience.

How Chang'e-5 and Yutu work on the surface of the moon is re-enacted, and people can wear augmented reality glasses to experience walking on the moon. Also, there is a life-size model of the core module of Tianhe, which allows visitors to walk in and learn about how astronauts live in the space – what they eat, how they sleep and whether they exercise.

There are several theaters in the museum, but be aware that reservation is required.

The museum is located at 380 Lingang Avenue. Visiting hours are 9:30am to 4pm, Tuesday to Sunday, except for the first Monday after its opening.

Real-name reservation is required for all. People can buy tickets on the museum's official website (www.sstm-sam.org.cn) or WeChat Account (gh_f1afa6047afc) seven days ahead of a visit. One ID can only buy one ticket. Every visitor is required to wear a mask and show their health QR code. An adult ticket is priced at 30 yuan (US$6.4) per person.

There is limited parking space, and Metro Line 16 is the best option to get there. 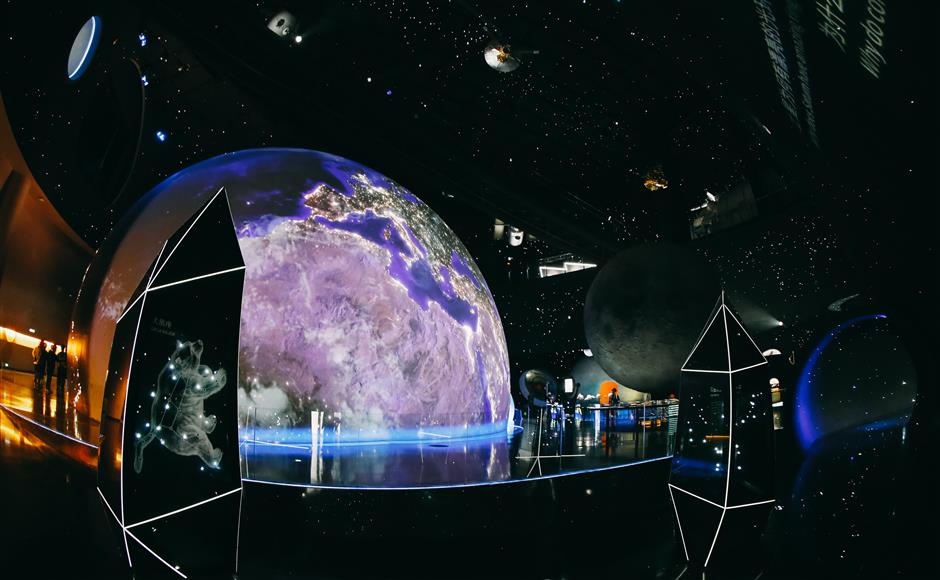 The museum takes visitors on an immersive experience. 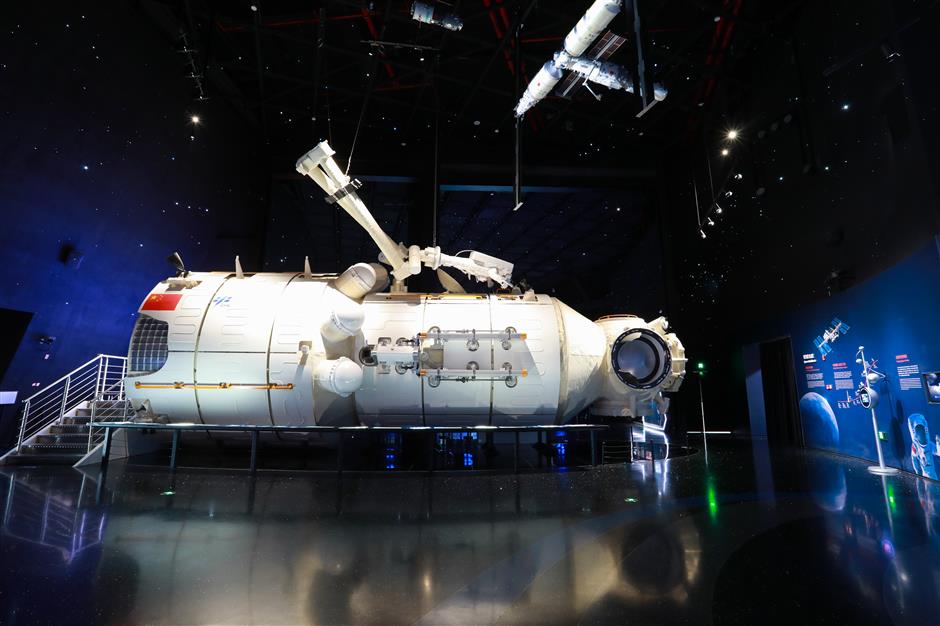 A life-size model of the core module of Tianhe. 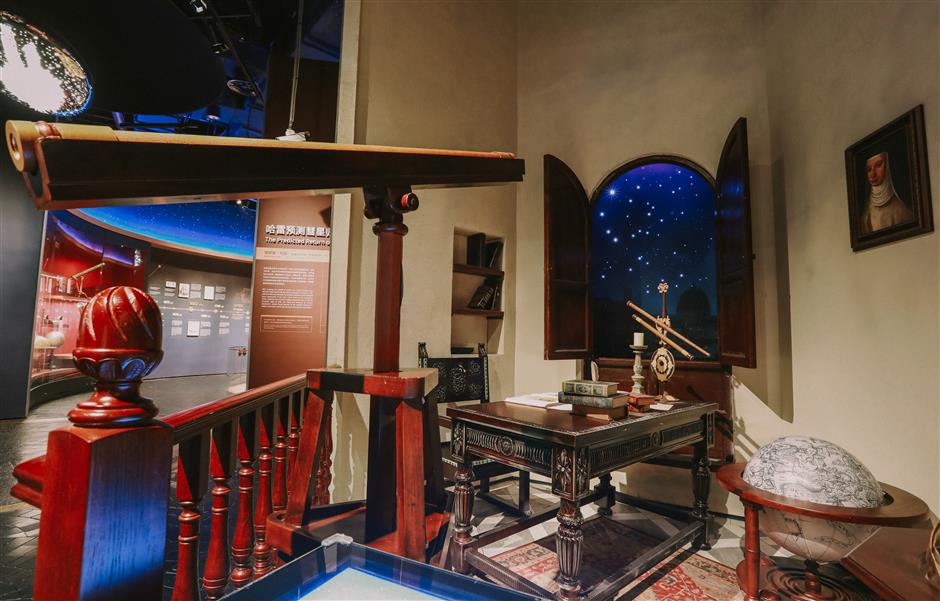 A recreation of Galileo Galilei's study.