Up, up and away at rebounding Hongqiao Airport

The first livestreaming event of Hongqiao airport on Sunday.

Hongqiao International Airport launched an exhibition and livestreaming event on Sunday to mark its centenary.

Four hosts of the Shanghai Airport Authority viewed the exhibition at a newly unveiled over 90-year-old historical house near the airport and experienced the airport's services during the ongoing summer travel rush.

More than 1.7 million online viewers watched the two-hour event, the second of its kind launched by the city airports to boost business and promote services as domestic flights are restored and passenger volumes pick up.

In August 1937, two Japanese scouts were shot dead near the airport, triggering the outbreak of the August 13, Songhu Battle between China and Japan. The airport was later occupied by the Japanese intruders.

It was converted into a civil aviation airport from a military airport in 1946. Air France opened the first international flight to a Western country at the airport in 1966. 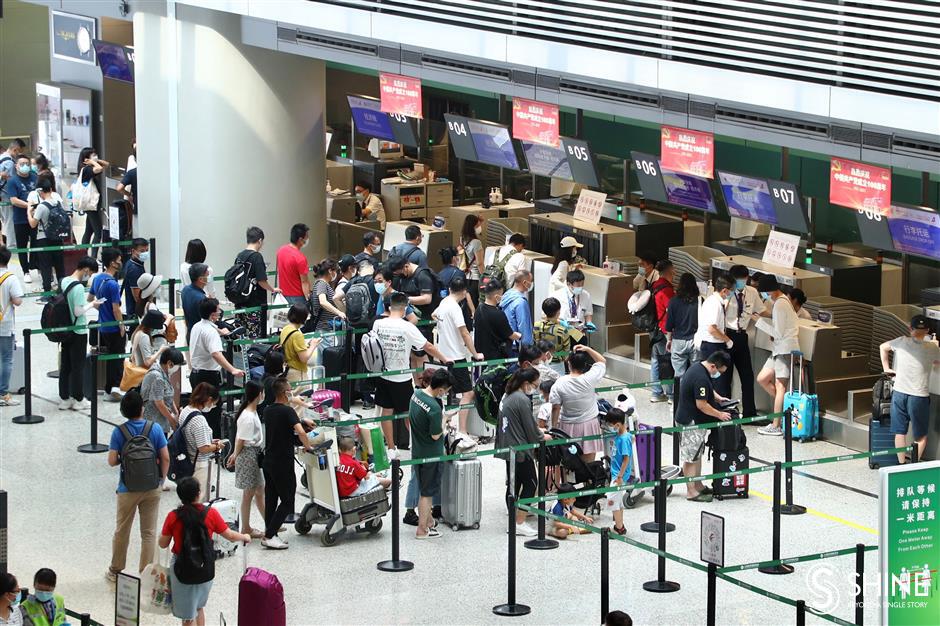 Hongqiao Airport is busy during summer.

The exhibition reviews the development of the airport over the last century.

Key exhibits include archives from the first international flights at the airport, and reception details for the diplomatic visit to China by then US President Richard Nixon in 1972.

Inscriptions of the names of Hongqiao and Pudong airports written by then vice Premier Chen Yi and Chinese president Jiang Zemin are also displayed.

The future expansion blueprints of the two airports are exhibited at the final part of the exhibition. According to the blueprint, the T3 terminal building will be built in the south of the S1 and S2 satellite terminal to serve 50 million passengers annually. It will be connected with the planned Shanghai East Railway Station to create another air-rail transport hub.

The hosts also toured around the two historical buildings, known as the "Hongqiao Origin," which were opened to the public for the first time.

The historical building under protective status was initially built in 1924 by an executive of the Shanghai Municipal Council as his holiday resort in the city's outskirts. The buildings were constructed in a traditional Chinese architectural style with a Chinese-style garden, but the inner decoration was created in the Western style. 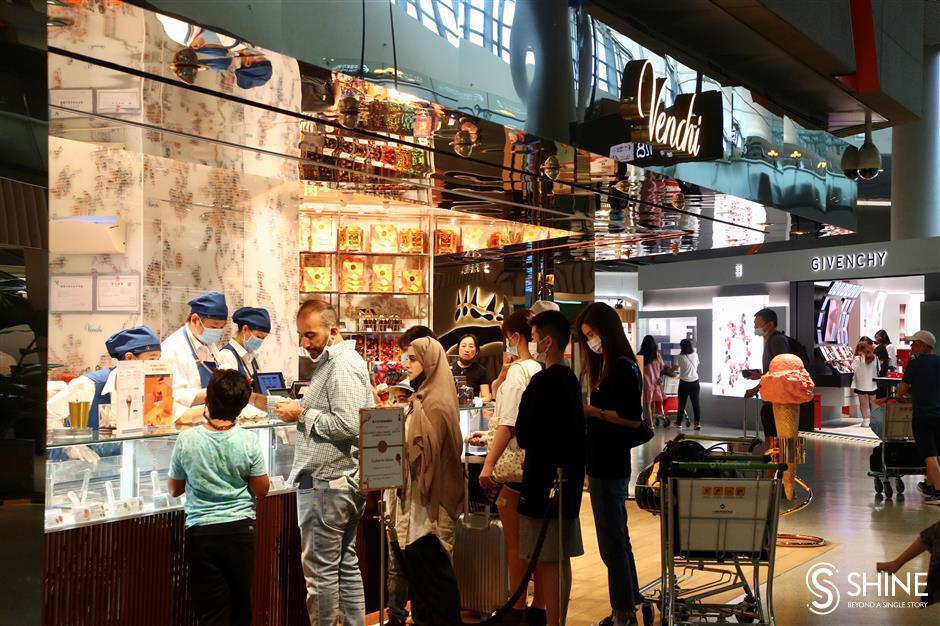 Visitors can learn how the airport developed from a single strip into one of the world's busiest air hubs with two airports, over 100 million annual passengers and four million tons of air cargo, the airport authority said. Reservations are required to visit the exhibition.

At the T2 terminal, renowned pianist Kong Xiangdong performed for travelers on Sunday afternoon for the livestreaming event.

The number of travelers has started to rebound during the summer travel peak after the COVID-19 pandemic, said Wu Na, a head security check officer at the Hongqiao airport.

Pudong and Hongqiao International Airports handled 36.06 million passengers in the first half of the year, 97 percent of whom were domestic travelers. An average of 1,775 flights have taken off and landed at the ports since July, the same level as in 2019. The airports have handled about 220,000 passengers a day.

The airport authority has opened fast security check channels for groups and travelers with a single carry-on luggage, Wu said. 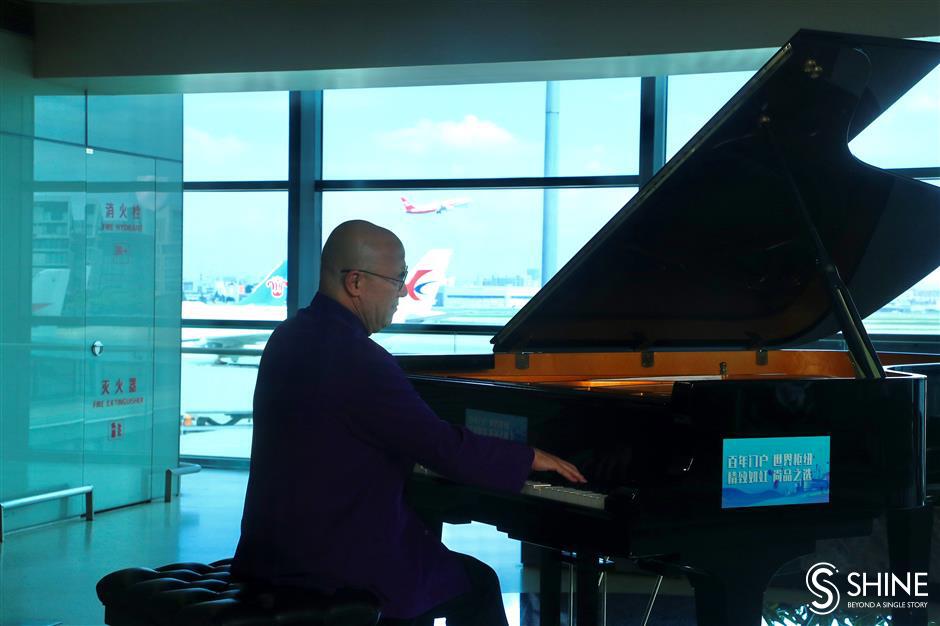 The hosts also promoted newly opened popular brands at the terminal building, such as the Japanese beverage brand Arabica, Italian chocolate brand Venchi and the airport store of the Shanghai Disney Resort.

"The sales of businesses at Hongqiao airport have exceeded that of 2019," said Dicky Cheung, a retail management official at the airport.

"It proves our strategy to attract more popular brands to the airport is correct," he said. 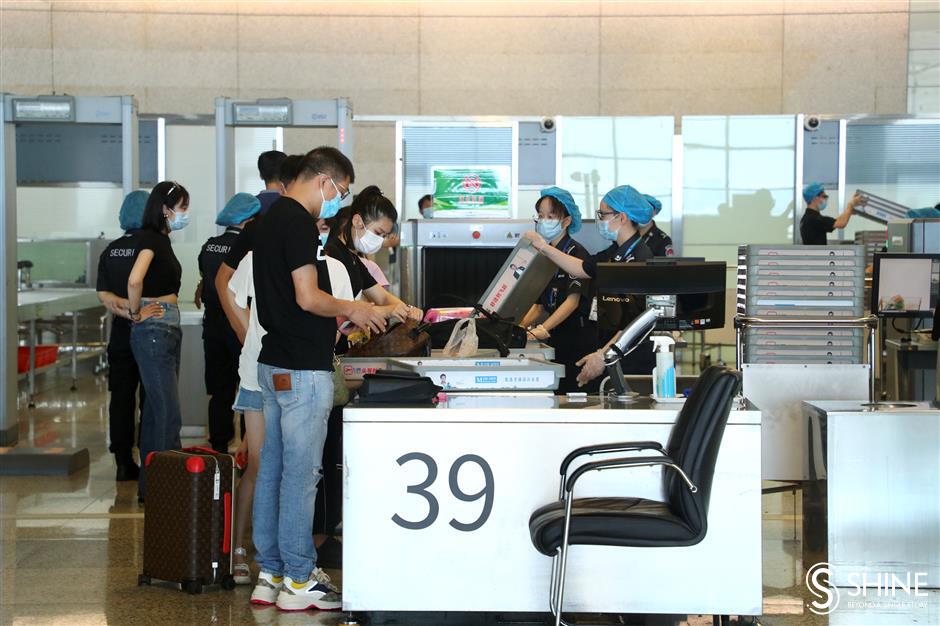 An inscription for Hongqiao Airport by then vice Premier Chen Yi is on display at the exhibition. 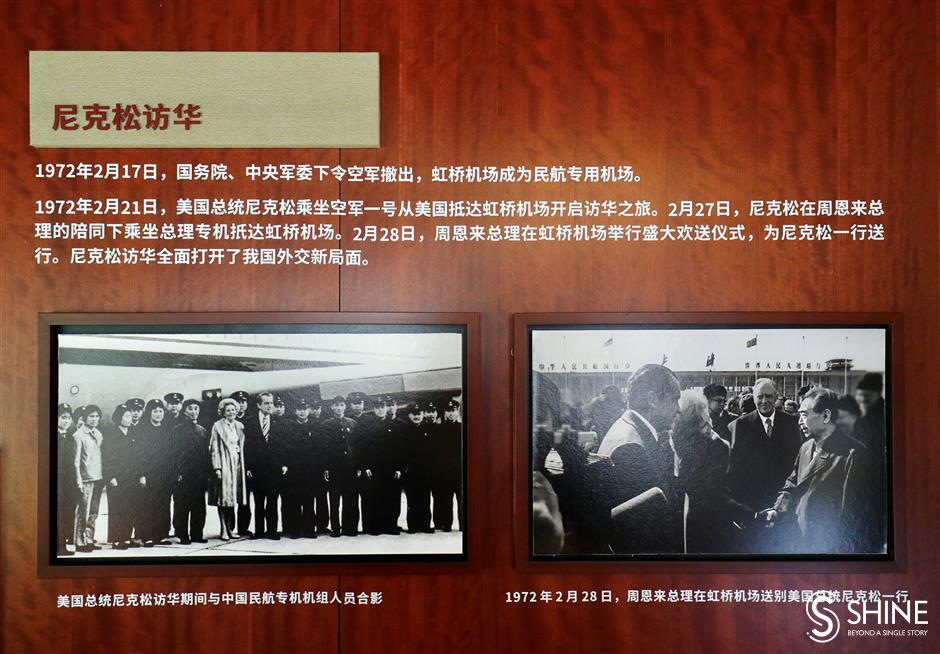 Historic photos of US President Richard Nixon and Chinese Premier Zhou Enlai at Hongqiao airport in 1972.