An emergency response drill for ferry accidents on the Huangpu River was conducted today in a public space along the Xuhui District riverside.

The core part of the river is busy with traffic, with ships of various sizes and multiple ferry lines occupying the same narrow channel – a recipe for collisions.

The drill, organized by the Shanghai Maritime Search and Rescue Center, was developed in response to the increasing number of people who fell into the core parts of the river over the years.

"Nearly 100 people fall in the river every year," said Zhu Ganghao, deputy director of the search and rescue center.

He claimed that Shanghai authorities plan to test the emergency response capacity of rescue teams after accidents such as ship collisions and crew members falling into the water happen.

The drill simulated a situation in which a small, new sand-and-stone ship collides with a scale cashier carrying about 150 passengers. After the collision, the ship takes on water and tilts heavily, causing the moped on board to fall and set off an open flame. 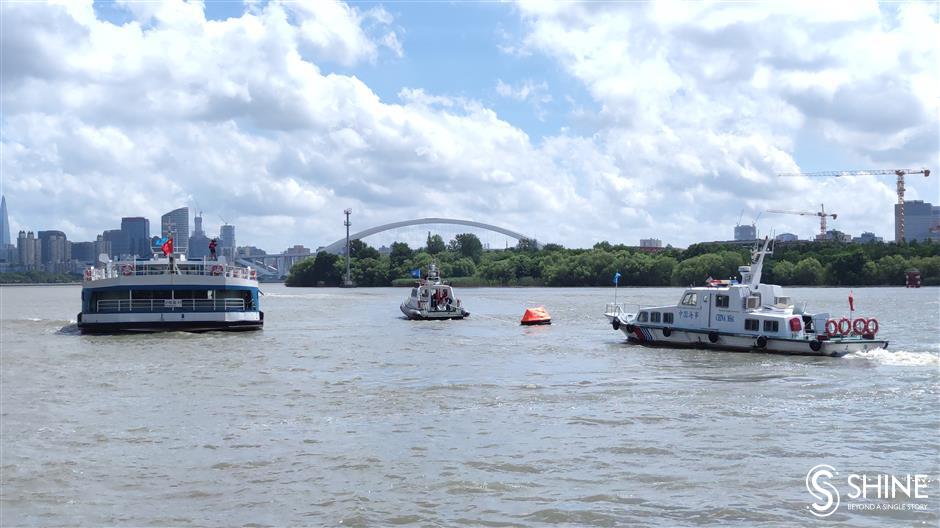 Orange smoke filled a ship on the river after the drill began. The situation on board was chaotic, as many passengers fell while some jumped into the water.

Maritime rescue workers rushed to the scene in lifeboats and took swift action. As soon as they spotted a man drowning, they dropped an inflatable life buoy. When he grabbed the life buoy, rescue workers pulled him in and assessed any injuries.

According to the on-site interpreter, this kind of life buoy is a new type of rescue equipment that is small, light and equipped with water-sensitive elements inside.

Once it hits the water, it automatically inflates in five seconds or less.

"The life buoy is equipped with a high-intensity rescue rope that makes it is easy to pull the person in distress to the side of the ship," the interpreter said.

During the drill, rescue equipment such as life-saving telescopic poles and multi-function water guns, as well as different types of rescue boats, including public security rescue boats, marine patrol boats and an underwater robot, were used.

A rescue helicopter is deployed during the drill.

In addition, rescue helicopters were deployed during the drill, circling over those who fell in the water. As it approached the drowning man, the helicopter's lifeguards descended along the lowered line. The lifeguard jumped in the water, grabbed the person in distress and hoisted them both back into the cabin.

When arriving on shore, the rescued man was given a quick examination and taken to an emergency medical station.

According to the search and rescue center, seven people were rescued and more than 150 people on board the ship were safely evacuated during the drill. 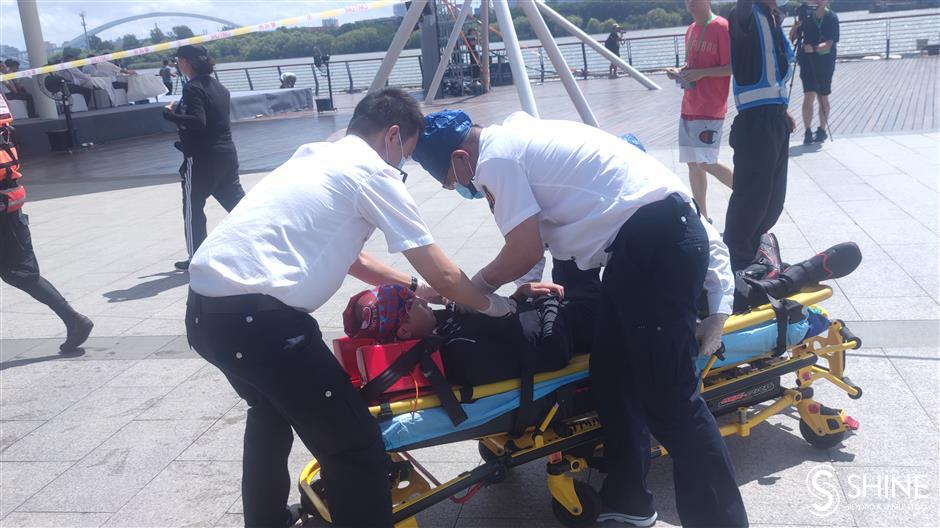 Medical team check the "drowning person" during the drill.