Young and old join celebrations for the Party's centenary 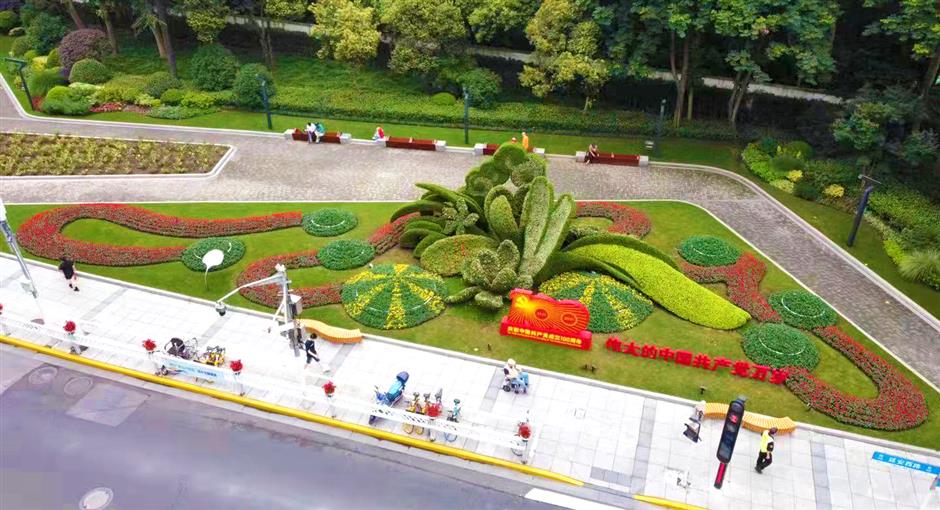 Celebrations for the Communist Party's centenary have heated up across Jing'an with a variety of activities being held. Let's have a look.

The district is spruced with floral landscapes and "100" decorations. Nanjing Road W., Shanghai Railway Station and other bustling areas have been decked up with more than 450,000 flowers. Red and yellow, the colors of the national flag, are mainly featured, and thus flowers in these two colors such as scarlet sage, cutleaf coneflower and Egyptian starcluster are largely planted. 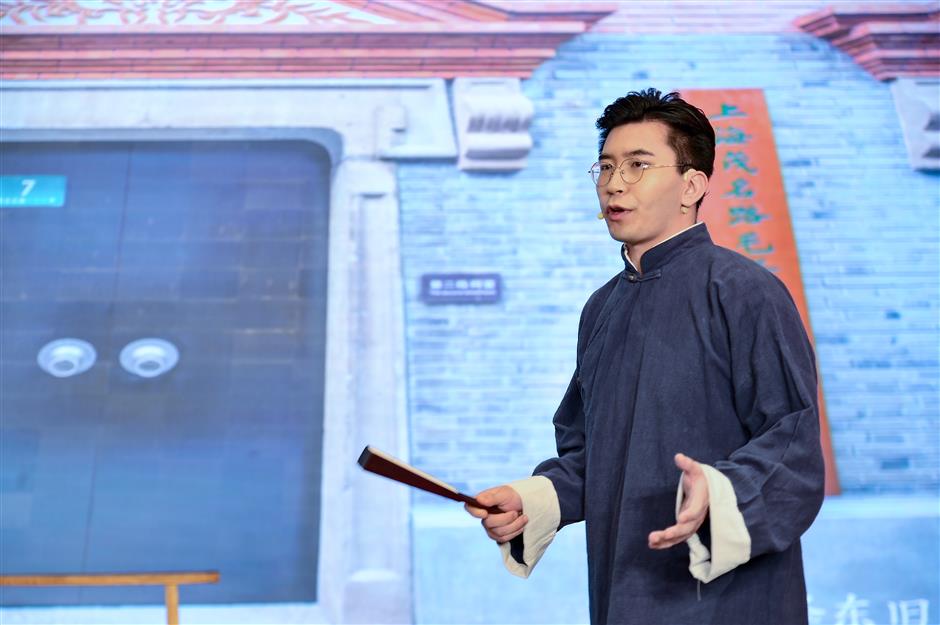 In one act, Mao's wife Yang Kaihui read a letter that never reached Mao, which moved the audience to tears for their sacrifice to the nation.

The play only lasts for about one hour, and requires few set designs. It will be later staged in neighborhoods and office buildings 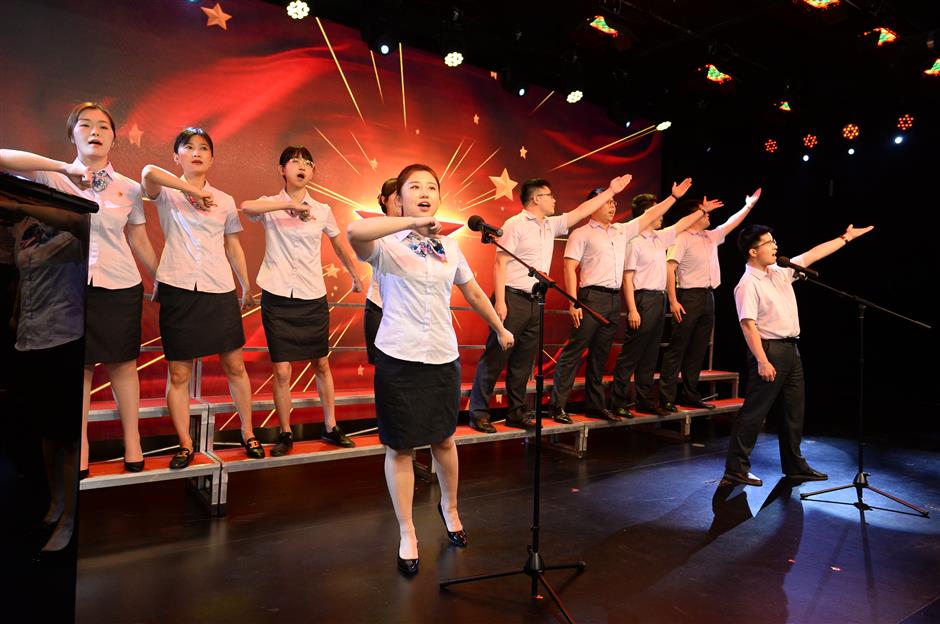 Besides, an exhibition featuring 100 posters of patriotic films will last to August 15 on the fourth floor of the Haiwen Building at 383 Tianmu Road M. 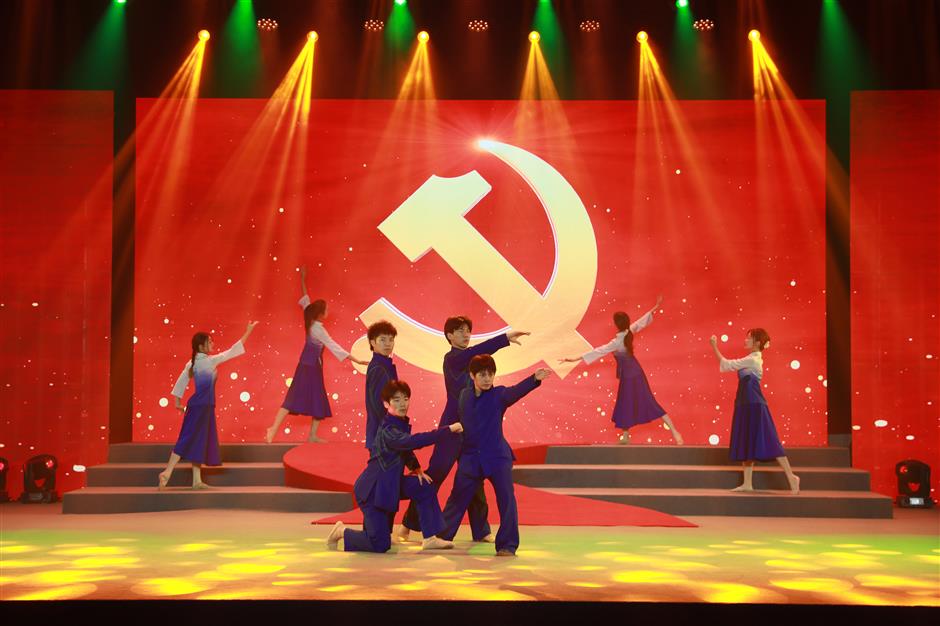 Yu Yong, Party chief of the district, said Jing'an witnessed the Party's development in early times, and he called on Party members to be pioneers and pacesetters in the new era. 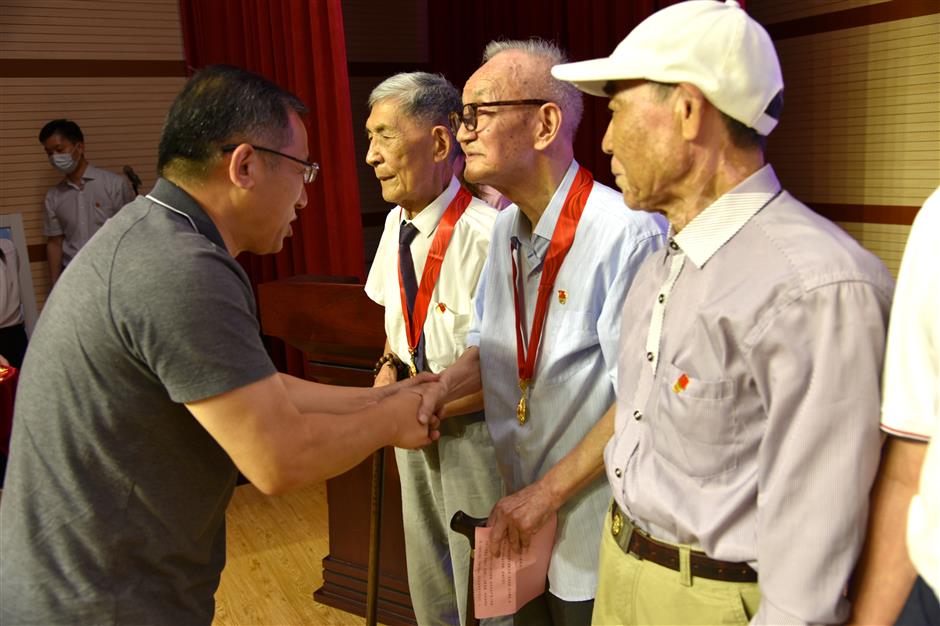 Pengpu Xincun Subdistrict has awarded commemorative medals to 32 Party members who have been bearing five decades of Party membership. It has also joined hands with Shanghai Normal University to stage a play telling the efforts to give old neighborhoods a new lease of life.

Pengpu Xincun is a renowned workers' community in the city. Built more than half a century ago, it initially housed model workers who made great contributions to the country's national industries.

However, over the years, s, this model community began to deteriorate because of an increasing population and a lack of maintenance. An overhaul started in March 2005.

Some buildings were renovated and toilets and kitchens were installed in every home with added floors to ensure enough living space for every family. Buildings which were too rundown were demolished and new mod ern high-rises were built in there.

Over the past 16 years, it has renovated dozens of buildings and benefited thousands of families. 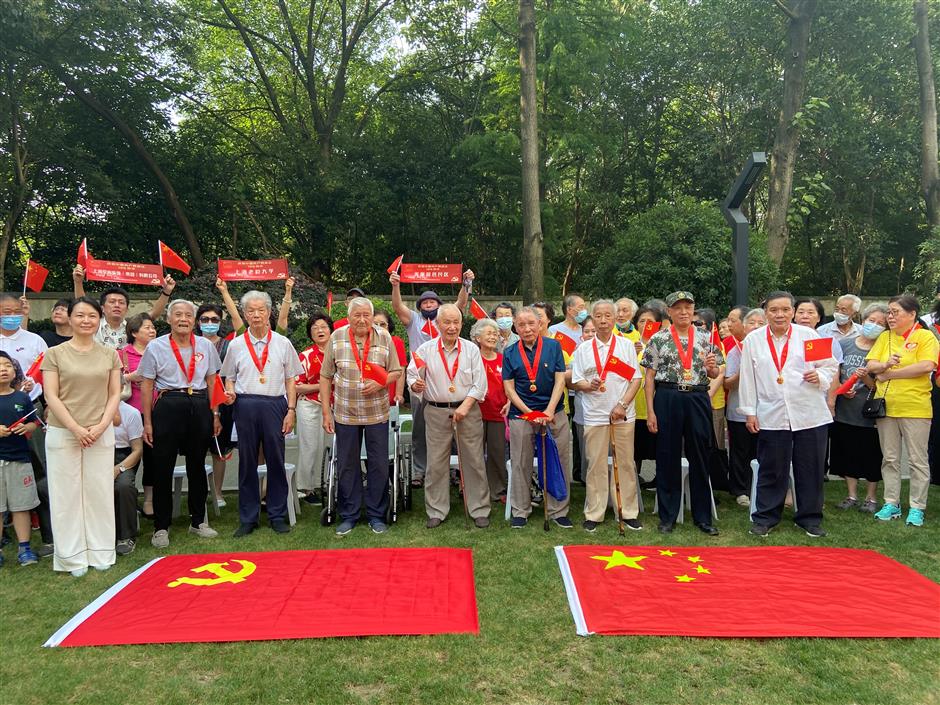 Residents and workers from the Meiliyuan neighborhood of Jing'ansi Subdistrict has presented pop-up performance, including dancing and flute playing, on a green land on the bustling Nanjing Road W. Also, there was a pop-up exhibition by local resident Pan Yixun, who have been a Party member for over 50 years. He has spent more than one year preparing 100 painting and calligraphy works to celebrate the Party's birthday. 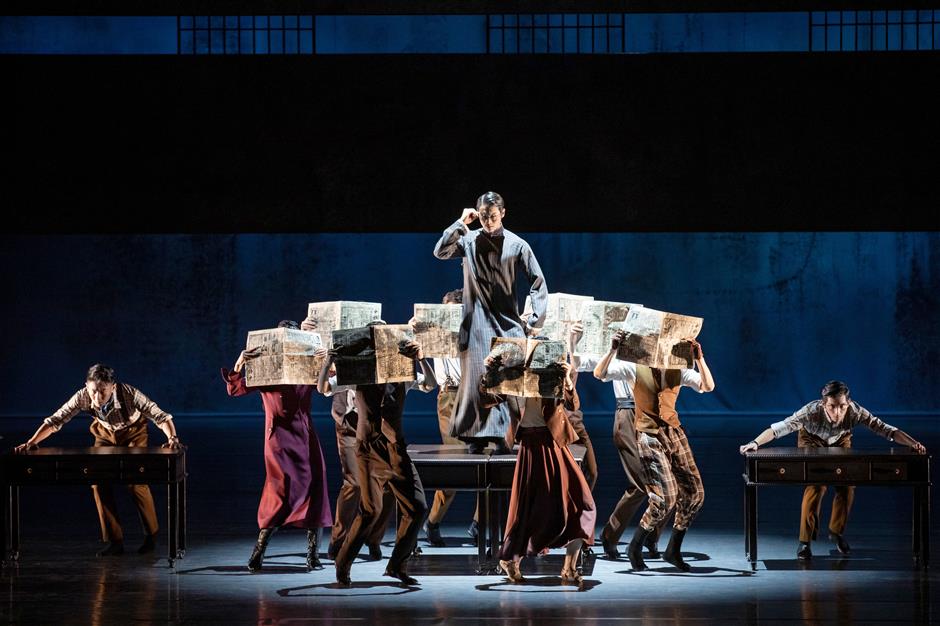 Shanghai Dance Theater's signature work "The Eternal Wave" has returned to Shanghai and it will present 100 performances this year at the Shanghai Majestic Theater.

The dance drama is based on the true story of revolutionary martyr Li Bai and his wife Lan Fen, who risked their lives for 12 years to secretly pass information to forces led by the Party.

Li established a secret radio station in Shanghai during the war against Japanese invaders. After the war, he became a spy embedded in the ranks of the enemy Kuomintang. While sending intelligence on the Kuomintang's Yangtze River defense line in 1948, he was arrested and later executed in Shanghai.

Since the dance drama made debut in December 2018, it has been extremely popular with audiences. As soon as tickets went out, people scrambled for tickets. And some of them were so blown away by the work to join the Party. 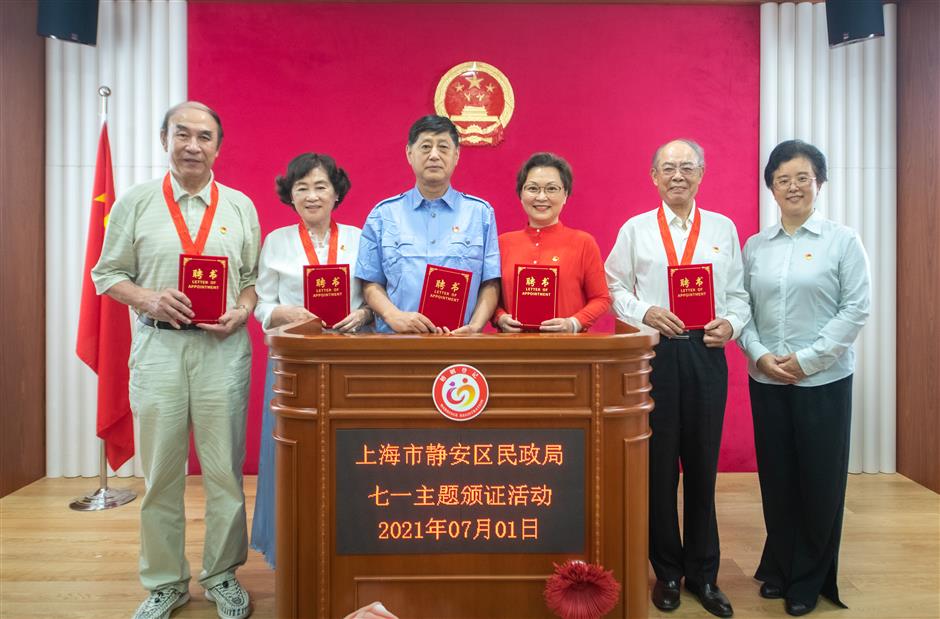 In Jing'an, many couples went to register marriage on the day of the Party's centenary, and they received blessings from model couple Ye Hongzuo and Luo Guofen. This year marks the 50-year anniversary of their marriage, and both of them have been Party members for over 50 years. 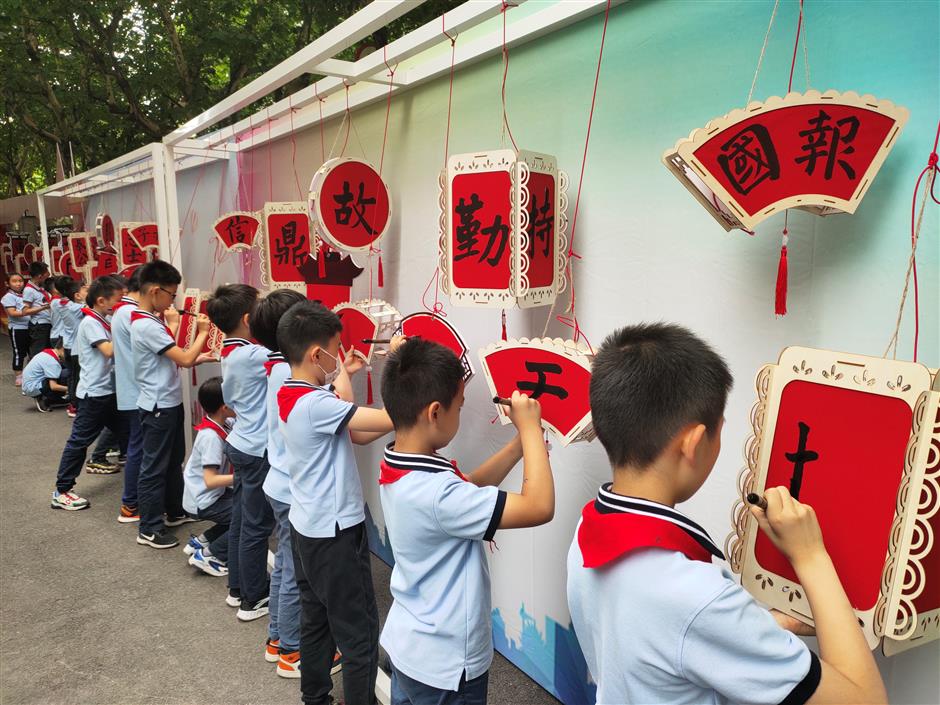 Expressing love for the country

Students and teachers in Jing'an have used seal, calligraphy and other traditional art to express their love for the nation. And their works have been displayed at the Jing'an Youngster Activity Center at 15 Jiaozhou Road.

President Xi Jinping delivered a speech at the ceremony marking the Party's centennial at Tian'anmen Square in Beijing on July 1, inspiring both people participating in the ceremony and those watching it on TV. Here are some of the comments.

"It's my honor that I could watch the grand ceremony and hear Xi's speech right here in Tian'anmen Square. Red songs that we've heard so much were played at the scene, and I couldn't help singing with performers. It's such a special feeling. I have been working at the grassroots level for more than 20 years. Many bed-ridden elder residents give their keys to me to let me visit any time. They trust me. Today, President Xi called on us to learn from the past and create a better future. It really touched me. I will continue to devote myself to people."

Bian Weitang, a Zhijiang Road W. Subdistrict resident who participated in experiments of the country's atomic bomb and hydrogen bomb

"This year marks the 100th birthday of the Party. Red flags were fluttering on the Tian'anmen Square, and President Xi made an important speech. Such scene really lifted me up. I'm so glad to see our country is boom ing, in economy, military and science and technology. Back in the 1960s, it was totally a different story, when the Party was striving to lead the country to develop despite of political isolation, economic blockade and military threats. And we created a miracle by successfully developing atomic and hydrogen bombs. I believe that under the leadership of the Party, China will be sure to grow stronger and we will live a better life."

"The Party is like my mother, and I'm so happy to celebrate her birthday. I will continue to follow the Party and devote myself to people." 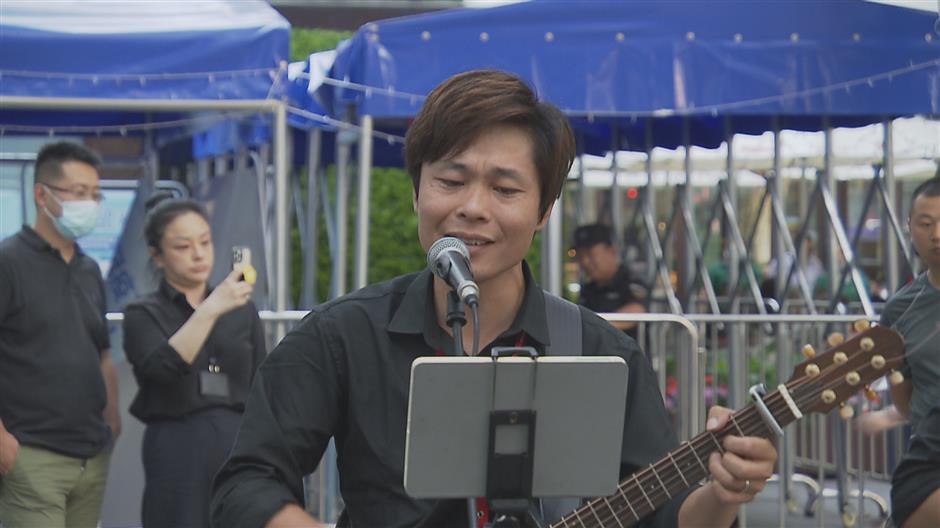 Street performer Du Shuochen and his fellows sang the titled song of Jing'an's orig inal "red" drama "Once Upon A Time in Fudeli" on June 30 and July 1 at the entrance of the Jing'an Park to celebrate the Party's 100th anniversary. Also, it was his own way to celebrate the one-year anniversary of his joining the Party.

The play is set against the backdrop of Shanghai's Fudeli neighborhood where the Party's Second National Congress was held. Legendary figures such as Mao Zedong and his wife Yang Kaihui are brought back to life on stage.

"The song is so beautiful, especially its lyrics which say 'young people are heading for their faith.' I got goose bumps whenever I sang it. About a century ago, people of my age resolutely went into revolution, and some even sacrificed their young lives for the nation. They were great people," Du said.

He added, "After the performance, I will visit the memorial of the Party's Second National Congress to learn the history."

Du came from Anhui to Shanghai in 2001. As he found he couldn't realize his music dream, he became a licensed street performer in 2016. In early 2000, he was taken ill. Shanghai Association of Performing Arts offered helping hands at once, and another street performer even planned to sell house to raise money for him. It impressed him a lot.

"At that moment, an idea came to me that I have to do something to repay the society," he said, and he found to be a Party member would be a good start. Under his influence, his two fellows have also applied to join the Party.

"Shanghai is a city where everyone can find a place and be part of it," he said. "I want to continue to sing for Shanghai, for beautiful life and for the Party. I want to be the light that can warm others."

This year, the Party created the July 1 Medal, as the highest honor, to commend distinguished Party members, workers on Party affairs and grassroots Party organizations. Only 29 people received such honor nationwide.

Lu Qiming, a resident in Jing'and District's Nanjing Road W. Subdistrict, is one of them.

The 91-year-old composer received the medal at an award ceremony held on June 29 at the Great Hall of the People in Beijing. After the ceremony, he was so excited to write down his sentiment.

"This morning, President Xi personally presented the medal to me. I'm so excited but at the same time I felt embarrassed. I just did what a Party member should do, but the Party gave me such a high honor," he wrote. "I felt nothing to repay but to continue to write more songs to pay tribute to the Party. I hope I can write songs until the end of my life."

Lu is known for composing masterpieces include the classic symphonic piece "Ode to the Red Flag" and the score for the 1956 war film "Railway Guerrilla."

Born in 1930, Lu joined the New Fourth Army at the age of 10, under the influence of his father Lu Huisheng, a revolutionary martyr. In September 1945, the boy joined the Party. But just two months later, his father was killed.

After the People's Republic of China was established in 1949, Lu left the army. He spent seven years studying to become a symphony composer and conductor at the Shanghai Conservatory of Music, which laid a good academic foundation for his creations.

Over the past several decades, he has created more than 10 symphonic pieces and 300 songs.

He has also written scores for many film and television productions such as "My Memories of Old Beijing" and "Romance on Lushan Mountain." Film songs like "Playing My Beloved Pipa" and "Who Doesn't Say My Hometown Is Good" have been beloved by generations of Chinese people.

Lu recalled how he created the classic "Ode to the Red Flag" in 1965. He combined elements from the national anthem "March of the Volunteers" with his personal experiences and emotions in the piece.

Lu noted that he is so proud to be born in China and witness the country's development toward prosperity.