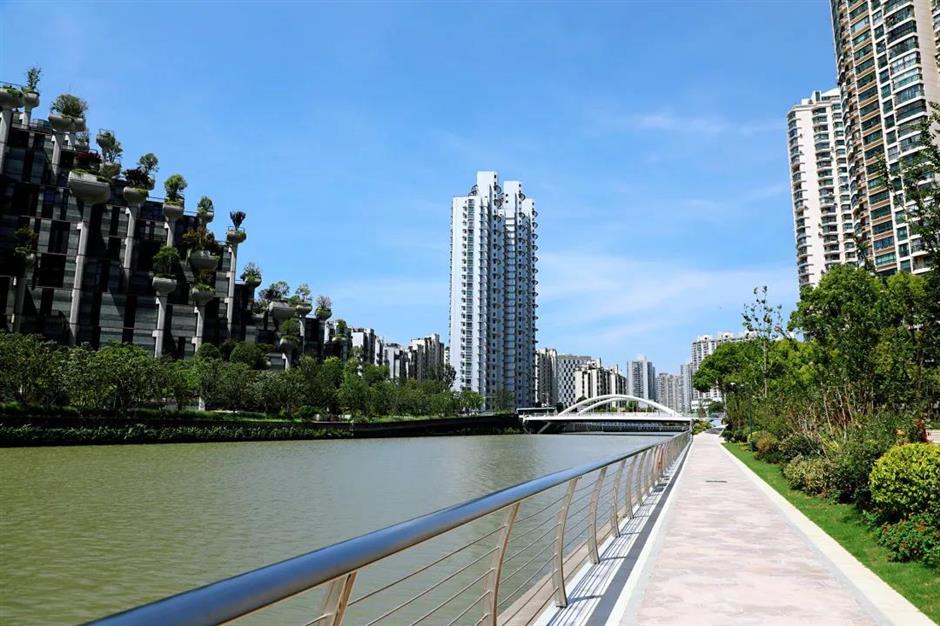 A riverside path that goes along the Brilliant City community

The most zigzag section of Suzhou Ceek, known as the "18 bays" in Putuo District, has fully opened its riverside development to the public.

"The old riverside walkway of our neighborhood has been refurbished within five months," said You Zhenfeng, a resident of Brilliant City.

"I feel deeply happy when walking along the new riverside path with my neighbors," You said.

Residents of the community had previously refused to share the riverside region which is enclosed within their neighborhood. Committee officials of the subdistrict and neighborhood spent months convincing each household and solving various difficulties and inconveniences for residents.

With the 18 bays, Putuo hosts the longest creek frontage in downtown, stretching 21 kilometers. As the creek passes through Putuo, it flows through various historical areas of Shanghai's growth to an industrial city. Waterfront redevelopment preserves that heritage.

Beginning in the first decade of the 20th century, Chinese entrepreneurs built national industries, including textiles, flour, beer, minting, printing and clothing, along the most zigzag sections of the creek.

Many of the former factory clusters have been preserved by converting them into modern use, including the now popular M50 art hub that opened in 2000 and the two-year-old X Tower specialty park.

Walls and fences in parks and residential neighborhoods have been removed to allow convenient public access and provide a continuous walkway.

The Putuo government launched a redevelopment of the waterfront in October 2018. Weedy, deserted backyards and illegal structures were first targets of the project.

The structures were demolished and the empty spaces were creatively filled with the likes of pocket parks and hubs for cultural industries. A former muddy waterfront path has been paved with synthetic tracks.

The riverside walkway in Putuo was once interrupted by 14 neighborhoods. Residents were mostly concerned about the safety of their communities and maintenance of the paths.

Liu Zhixiang, an official of Yichuan Road Subdistrict which governs Brilliant City, said community workers had spared no effort to persuade the residents to cooperate with the opening-up campaign.

The subdistrict established a special team, including community workers, police officers, lawyers and building chiefs, to communicate with residents.

Over 300 subdistrict and neighborhood committee officials talked with each household in the high-end commercial residential community that is home to about 30,000 residents.

"Some landlords strongly opposed the opening of the riverside region at the beginning," Liu recalled.

As a highlight, a Wishes Wall was established for residents to post their proposals and objections.

Over 2,000 suggestions and proposals were registered through the wall, mailboxes and email, said Ye Yi, deputy director of the subdistrict.

Most of the concerns have been taken into account while most of the difficulties for residents have been solved, Ye said. The subdistrict and district government efforts paid off and all residents support the plan to open the riverside path to the public.

Construction of the walkway along Brilliant City began on January 28. The riverside scenery and facilities were greatly upgraded. The walkway was officially opened on June 28.

The first group of 50 residents was invited to a tour along the newly opened creekside path on June 22 to further solicit their opinions.

"I've noticed many great improvements, such as the iconic white sunshades which have been renewed," said resident Ma Peiqi, head of the Yichuan branch of Shanghai Elderly Photographers Association.

Ma has recorded the major changes along Suzhou Creek in past decades. The riverside site, formerly known as Liangwan Yizhai, or "two bays and a residence," was one of the city's most notorious downtown shantytowns until 1999. It was replaced by Brilliant City, a high-end commercial residential community.

"The riverside environment has been further improved with the latest creekside redevelopment," Ma said.

After the tour, residents offered additional design suggestions related to fences, street lamps and entry barriers and these will be incorporated in future improvements. The subdistrict is encouraging residents to give more feedback after the opening of the paths.

"The redevelopment on the riverside path is just like a redecoration of our homes," said You. "Through the meetings and tours, most of the concerns of the residents have been solved," she added.

The Dahua Qingshuiwan in Changfeng Community has also opened to the public with zigzag paths, newly planted trees and riverside platforms.

Walkway designer Chen Shupeng said he divided the riverside region into two parts – the public walkway, and recreational sites for residents of the neighborhood. A skywalk was built to avoid crowding in the community's public space.

The district government has also improved flood prevention, the ecological environment and recreation areas. Pocket parks, bridges and innovation parks have been placed along the 18 bays of the creek.

The Baocheng Bay waterfront section was home to a fifth of China's earliest textile factories, dating back to the 1920s. After 1949, Shanghai No. 1, 6 and 7 cotton factories were located on the waterfront, along with a military warehouse for quilts and uniforms. The site was dubbed the "cradle of China's textile industry."

The X Tower Park was developed from a century-old military warehouse, and most of its main structures were preserved.

The park, redesigned by Italian designer Per Erik Bjornsen, is now home to about 100 cultural industry startups. Original cargo elevators have been preserved and a former watchtower at the site gives visitors a panoramic view of scenery along the creek.

Several other industrial structures have also been preserved, including a warehouse and pump house at 652 Changshou Road, which was built in 1922 by the Japanese Home & Foreign Cotton Trading Co and later taken over by Shanghai Textile Holding Co.

The upstream M50 Art Park has also become popular, especially among nearby residents. Since it was created at the turn of the millennium, over 150 galleries and art institutes have chosen to make it their home.

The park has changed its focus from contemporary art to the more general theme of "life and art," targeting a wider audience. Street art decorates walls, corridors, street corners and parking spaces, some of it harking back to the history of the area.

On Moganshan Road, M50 was one of the first and most notable cases of industrial heritage given new life as a cultural attraction. M50 straddles 24,000 square meters along the creek, with 50 buildings that were once home to enterprises like the New China Textile Co. It is one of the best-preserved downtown industrial sites.

The riverside region, once an enclosed parking lot and garden, has been converted into a pathway, a sightseeing platform and small plaza. Graffiti paintings decorate the old flood wall.