The patient, a 53-year-old driver at Pudong International Airport's cargo terminal, has no connection with the recent COVID-19 outbreak in other Chinese cities, said Wu Jinglei, director of Shanghai Health Commission.

The disease control and prevention authority is conducting genetic sequencing to check whether the man is infected with the hyper-contagious Delta variant, Wu told a press conference on Tuesday.

The man had received full COVID-19 vaccination along with all other staff members at the city's two airports.

The job of the man, surnamed Tang, was to transport the crew members of foreign airlines' cargo flights through a "close-loop" region at Pudong airport's cargo transport section.

He tested negative during two previous regular nucleic acid tests on July 21 and 28, but tested positive during the recent test on Monday, said Li Guohua, deputy director of Pudong.

The man, now in quarantine at Shanghai Public Health Clinical Center in outlying Jinshan District, had not left Shanghai within 14 days.

Apart from being at his residence at Xinyuanxiyuan Community in Pudong's Chuansha Town, he had visited the Miaojing Road outlet of fast food chain Yonghedawang and Gongnong Restaurant. All the sites have been closed and disinfected, Li said. 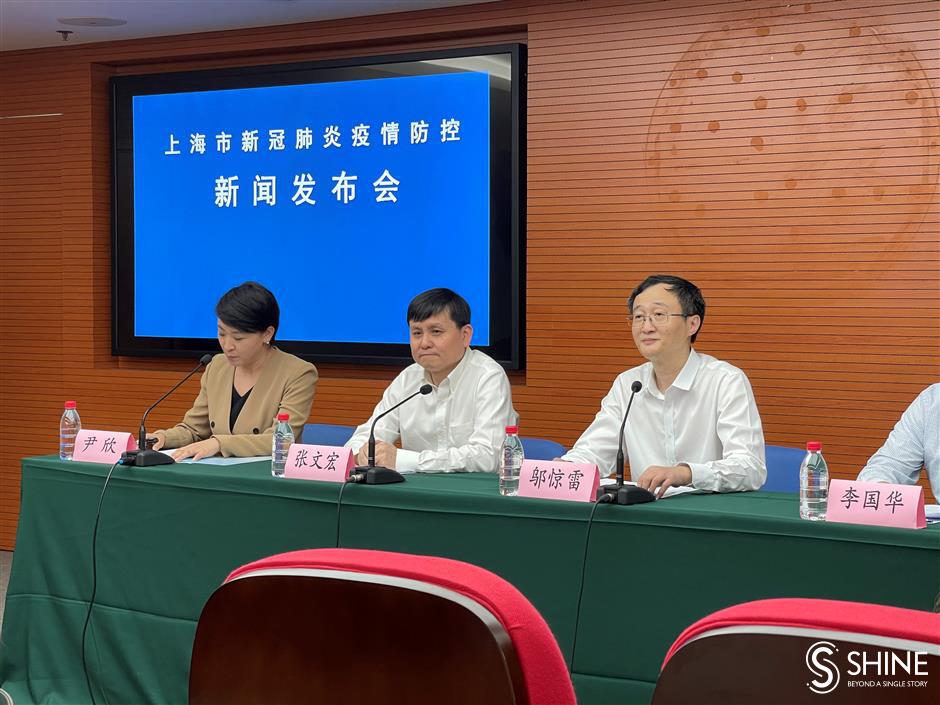 As of 9am on Tuesday, 52 of the man's close contacts, including six family members, had been quarantined and received the first round of nucleic acid testing. All of them tested negative.

Of the 250 close contacts of those 52, all had been quarantined and tested negative in the first round of testing, said Li.

A total of 64,860 people, including other staffers at Pudong airport, have been tested as of 9am Tuesday. Among them, 27,174 had tested negative. Other samples are being tested.

A total of 413 samples have been collected at the related sites and all the results were found to be negative.

The authority will continue an epidemiological investigation, trace the origin of the virus and carry out further nucleic acid testing, Li said.

According to State Council regulations, Xinyuanxiyuan Community has been rated a medium-risk region, which means people in the neighborhood are quarantined with health monitoring for two weeks.

Three rounds of nucleic acid tests will be conducted on all residents in the community. The risk rankig of elsewhere in Shanghai remains unchanged as low. 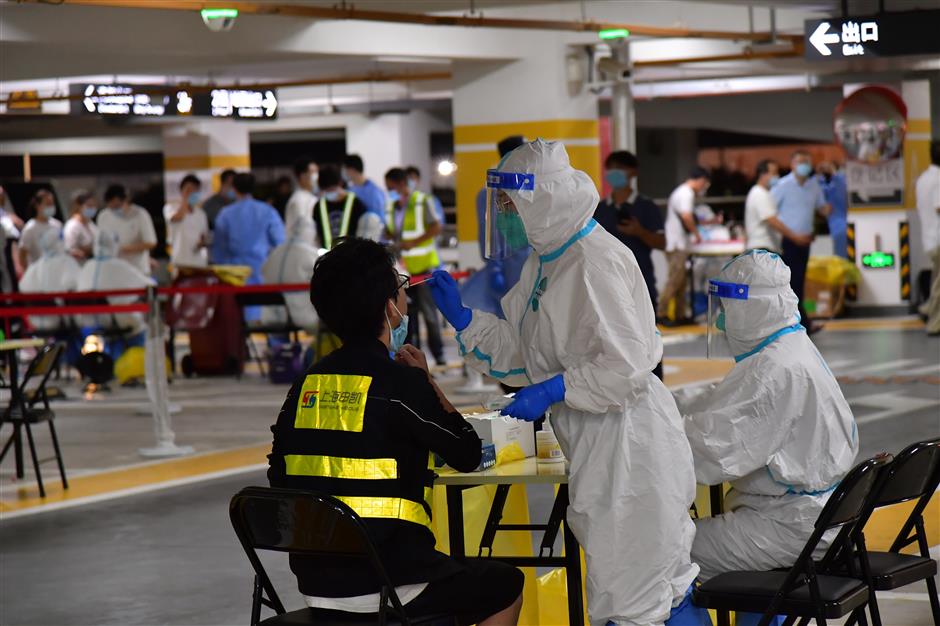 Staff at Pudong airport are tested overnight after a new COVID-19 case was reported in Shanghai on Monday.

Over 18 million people in Shanghai, or 85 percent of those aged over 18 years, had been vaccinated by Monday, Wu said.

Zhang Wenhong, leader of Shanghai's COVID-19 team and director of Huashan Hospital's infectious diseases department, said the vaccine had effectively reduced the spread of the coronavirus.

"Thanks to the high vaccination rate, all the close contacts and related personnel of the confirmed case tested negative," said Zhang.

"People with chronicle disease, the elderly and those yet to be vaccinated are not suggested to travel," he added.

Over 500 medical workers set up 25 sample collection sites to test employees working at the airport. 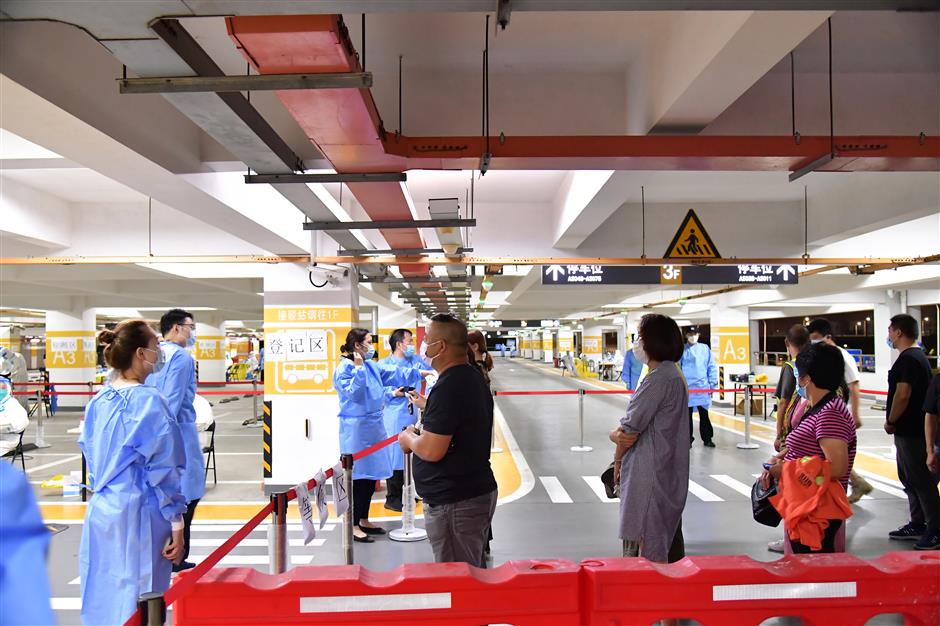 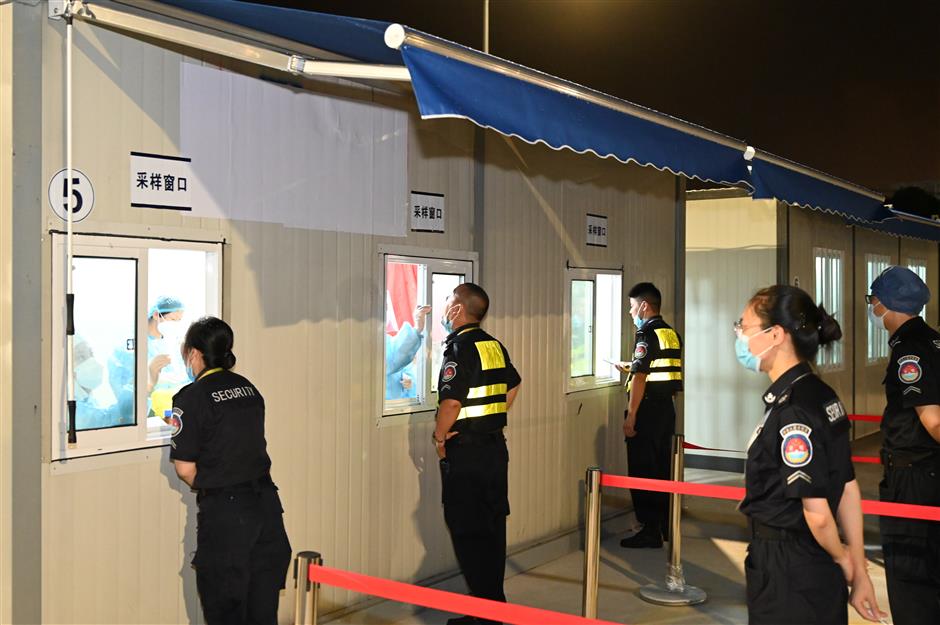