Man grateful to police officers who helped save his life 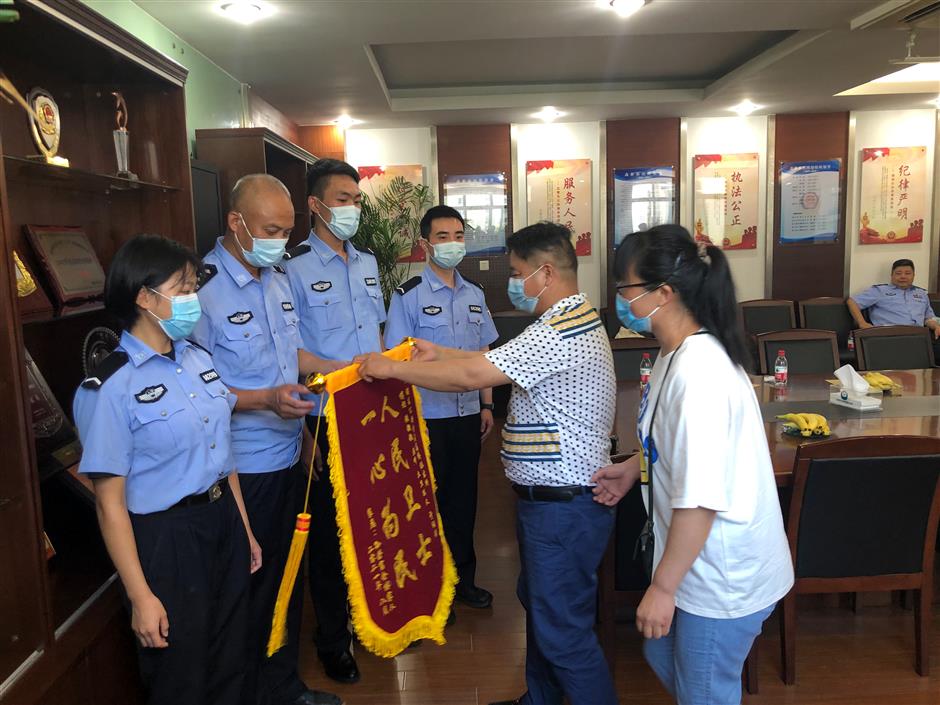 The man surnamed Sun (second from right) who had a heart attack thanks police officers on Friday.

A man surnamed Sun expressed his thanks to several police officers in the Pudong New Area on Friday for their help in his moment of life and death.

Sun had a heart attack while driving on an expressway on July 27, and the police officers led the way for him to get to the hospital before it was too late.

Sun was delivering goods with his wife surnamed Zhou to their business partner in heavy rain on Outer Ring Road.

While Sun was waiting in heavy traffic, he suddenly felt an acute pain in his chest and began to sweat profusely. Not able to get an ambulance, Zhou spotted a police car not far away and sought help from the officers.

Fu Ju, a police officer from the Gaoqiao Police Station, was driving in the direction of Songjiang District on a law enforcement task with his colleagues.

"The lady was tapping on the door of our car and was crying," Fu recalled.
After learning that Sun needed immediate medical attention, Fu and his colleagues approached him and determined he most likely had a heart attack.

They carried Sun to their police car and rushed him to the nearest hospital, which took only 10 minutes. The officers left after Sun was admitted to the emergency room.

Sun, only semi-conscious, was in a dire situation, but doctors resurrected him after 15 minutes and 16 electric shocks. Later he had a heart stent surgery and gradually recovered.

The doctors believe Sun's chances of survival would have been very low had it not been for the help of the police.

Since the police officers who helped Sun were unknown to the couple, they searched for them on the Internet and through the media.

"I blamed myself for failing to ask the police officers for their names before they left," Zhou said. "It was great that we finally found my husband's saviors and said thanks to them."

On Friday, the couple met the officers in person to thank them.