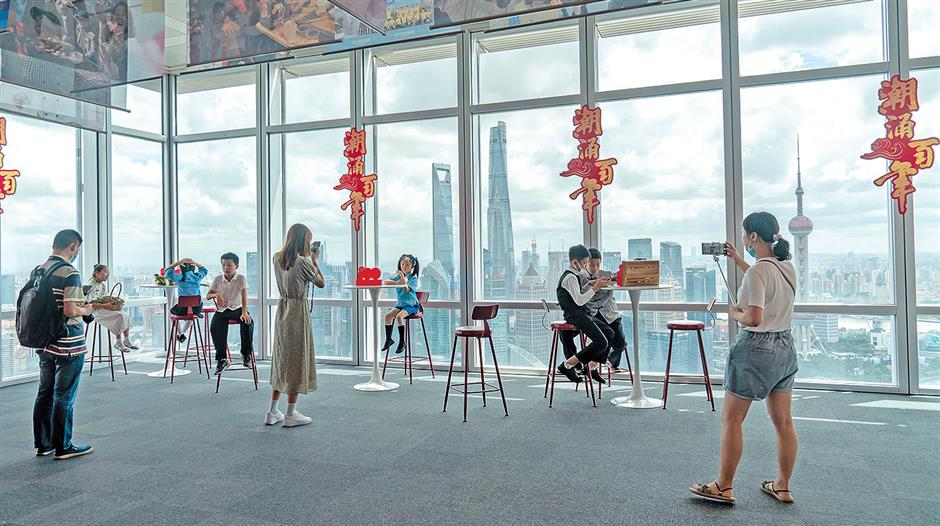 Visitors take photos of the stunning skyline along the Huangpu River from the 55th floor of the newly opened Raffles City The Bund in Hongkou District.

The world's 10th and Shanghai's third Raffles City commercial complex has opened in Hongkou District to further boost the prosperity of the North Bund waterfront.

Raffles City The Bund is located in the core region of Huangpu River waterfront. It covers about 420,000 square meters above Metro Line 12's Tilanqiao Station.

The new landmark shopping mall, nicknamed "Inspiring City," is intended to be an integrated platform for culture, art, technology and tourism, according to Hongkou government.

Over 200 business tenants, accounting for 92 percent of the capacity, have been attracted to the complex. More than half of the businesses are new to China, East China or Shanghai.

Many popular young artists were invited to host a three-day music festival titled "Strawberry Town" to mark the grand opening. A designers' exhibition on Dimoo, the popular cartoon figure of Pop Mart, a famous blind box brand in China, has also been launched. A five-meter-tall Dimoo was erected on the complex's outdoor plaza.

Many new business and commercial concepts have been tested in the shopping complex. The Bridge+Spark platform, for example, combines offices and retail stores to offer exhibition and incubation services for new retail or beverage brands. Six tenants, mainly fashion clothing brands such as Garments and Sumday Athletics, as well as cosmetics brands Vidivici and Yunjac, are inaugural participants.

The North Bund outlet of C3Museum has also opened to showcase many antique porcelain artworks. Classes on traditional Chinese culture, aesthetic education, intellectual property and coffee culture will be held regularly in the museum.

As a highlight, a nostalgia market featuring classic street scenes of Shanghai in the 1990s has become a popular downtown site for both citizens and tourists since it opened in the mall.

An old-style kitchen and sitting room, along with many common daily commodities, such as a bamboo basket, flask and iron washbasin, will revive the memories of many local citizens.

A food store at the entrance is decorated in the 1990s' style, and has a grandma selling white orchids at the entrance. The nearby eatery sells tea eggs, once a popular street cuisine, while many magazines published around 1995 are available at a newspaper stall.

Over 60 percent of the exhibits are genuine items collected from around the city, said Lin Tao, one of the curators. Lin said he found many of them in old residential communities waiting to be demolished.

Visitors can pose with the wax figures or visit stalls to taste some traditional foods.

With the help of Hongkou government, many operators of popular food stalls in the North Bund area have been invited to cook on site at the market.

Visitors to a nostalgic market in the Raffles City The Bund get indulged in the settings of the lane houses of the last century.

The Tilanqiao scallion pancake, for instance, has been moved to the market inside the mall. Customers who usually had to wait for over half an hour to buy the traditional pancake can buy the popular local dish more easily.

Many of Shanghai's time-honored food brands are also available, such as Xiandelai, which is famous for its pork chop with rice cakes, Dahuchun, renown for one of Shanghai's famous pan-fried, pork-stuffed shengjian mantou buns, Xiaoshaoxing's Shanghai-style baizhanji, or sliced cold chicken, and Xiaojinling restaurant's famous salted duck.

To support the booming businesses in the commercial landmark and provide better services, the Hongkou government has launched a new flagship service center on site to solve problems for companies and improve the business environment of the riverside region.

The application process has been shortened from more than 20 days to five for certain issues for tenants based at Raffles City, according to an official with the landmark complex.

"The streamlined services have effectively showcased the improved business environment of North Bund and attracted many global companies and businesses," the official said.

This new round of planning on the North Bund is the city's largest-scale project since the development of Pudong's Lujiazui financial hub in the 1990s.

These include dozens of top-level office buildings, which will house about 100 headquarters of multinational firms, international organizations and functional institutions. The district has organized an expert panel and a chief architect office to guide the development and construction of the site.

Detailed planning has been completed for the skywalks, central park, underground space, industrial functions and management of the central business district.

Apart from the new Raffles City, some other key commercial projects will be launched soon on North Bund. They include the Hall of the Sun, to be one of Shanghai's biggest commercial complexes and which is to open near the waterfront this year. It will feature a giant dome, terraces, aquatic park and IMAX cinema.

The project will connect with the Hall of the Moon, which has already opened in Ruihong Tiandi, to become a new "urban life icon" covering a total of 250,000 square meters in the city's north downtown.

It will mainly serve the many residents in Ruihong Xincheng community, one of the largest urban renewal projects within the city's Inner Ring Road. The precinct around Hongzhen Old Street area, once the largest remaining shantytown in Shanghai, is now an upmarket community.

Construction has also been completed on a new landmark building on the North Bund which will include a new state-of-the-art theater. 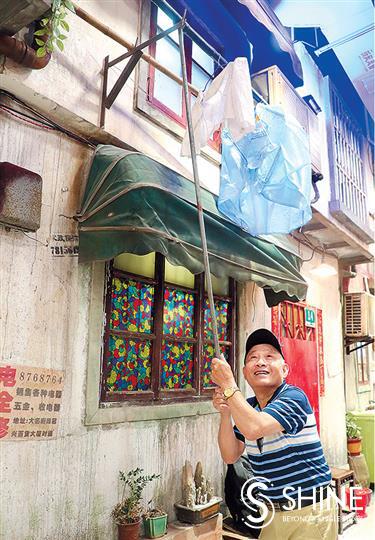 Visitors to a nostalgic market in the Raffles City The Bund get indulged in the settings of the lane houses of the last century.