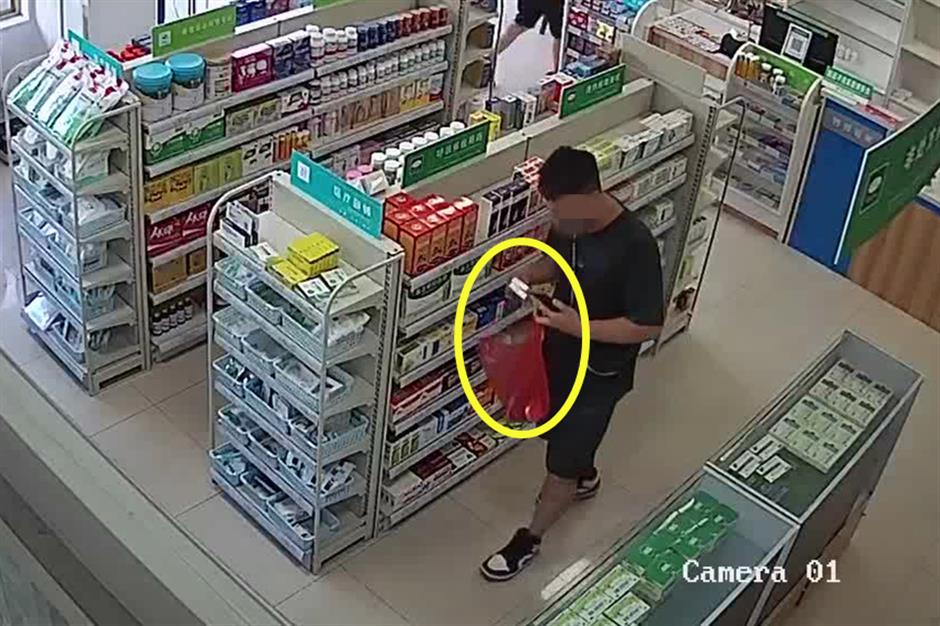 The theft is caught on surveillance cameras inside the drugstore.

A man has been detained for allegedly stealing cough medicines from a drugstore, claiming that he was addicted to them, Shanghai police said on Wednesday.

The man surnamed Xie, who lives in Sijing Town, suburban Songjiang District, was caught last week after the drugstore reported the theft to police on July 20.

Xie allegedly stole eight packs of cough pills known as "Dextromethorphan Hydrobromide Dispersible Tablets" on four occasions from July 13. The stolen medicines were worth over 200 yuan (US$31).

The theft was caught on surveillance cameras inside the drugstore.

Xie told police that he first took the medicine in June when he had a cold, but then he found that his mood got better every time he took it when he felt anxious about something. Later he started to take the pills on a daily basis, up to two packs a day.

After a fight with his girlfriend last month, he felt distressed again. But with no money on him, Xie turned to stealing the drugs, police were told.

However, Yan Qianwei, head pharmacist at Songjiang's Central Hospital, said the pills Xie took can't lead to drug addiction, and that his addiction was a rare case.

"It's more like a mental thing, like some people like to eat something sweet when they feel down, and it makes no sense to treat anxiety with cough medicines," Yan rationalized.

"Whatever the medicines in question, overdosing is harmful to people's health in the long run, especially for the kidneys and liver."