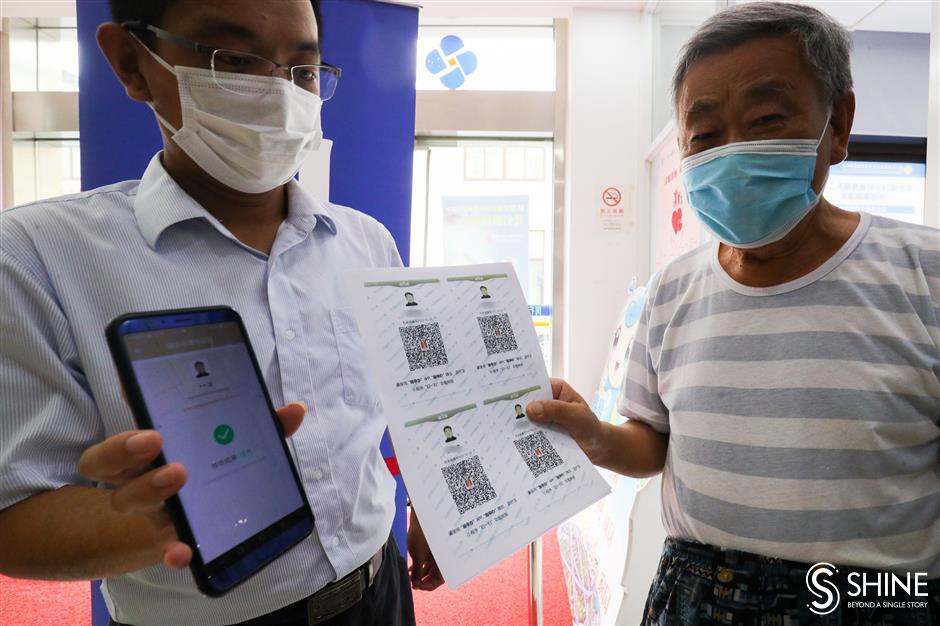 Sun Huanqi, 83, receives the paper version of the Suishenma code at the Xinzhuang Town Community Service Center in Minhang District on Thursday morning.

A print version of Shanghai's health QR code, or the Suishenma digital ID, has been released for the convenience of senior citizens, especially those who don't have a smartphone.

Local residents aged over 60 can apply for the "offline Suishenma," which is printed on a piece of paper, at community service centers.

Inspection staff can scan the printed code, which is valid for 180 days, with their Suishenban app to check the three-color health code of the holders, the same as the mobile version, the city's big data center said.

The Suishenma code has become increasingly indispensable for citizens on COVID-19 prevention and to verify their identity. Its services have been expanded to also cover social security and traffic cards as well as other certificates.

The code was initiated in February 2020 to check the travel history of individuals during the COVID-19 pandemic. It later became the digital ID for citizens and companies due to its convenience and efficiency. Foreigners and those from Hong Kong, Macau and Taiwan also can apply for Suishenma and enjoy eligible services.

The QR code has been used more than 3.7 billion times by some 54 million people as of late last month, according to the city government.

However, many seniors have complained they cannot get access to some public sites without the digital code, which can prove the users have never been to any affected areas amid the COVID-19 pandemic.

They can either apply with their ID cards or Suishenma code on the machine. After verifying the name and head shots, the code will be printed on the machine. They can also report the loss or replace the paper through the machines. 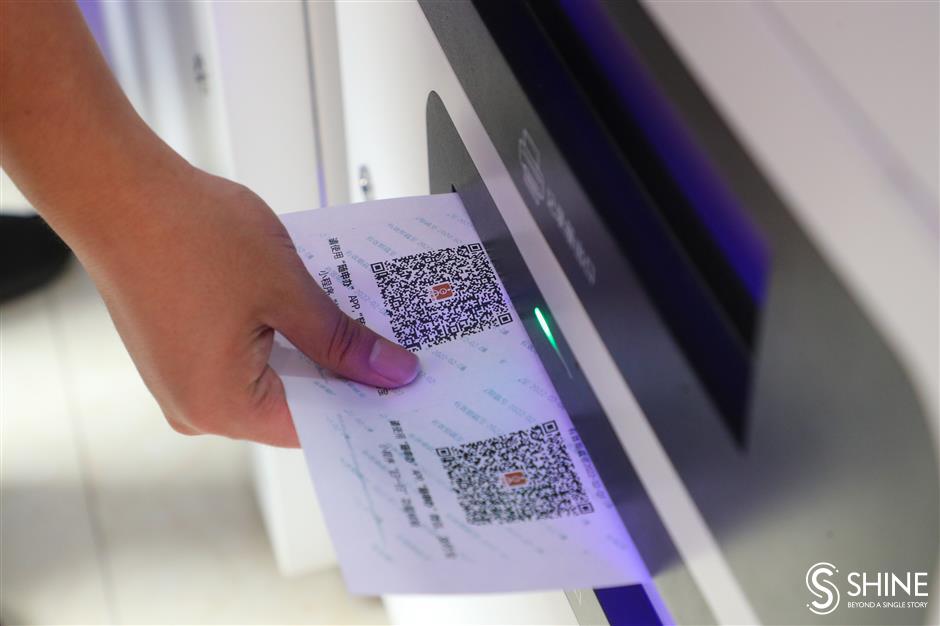 A paper-version Suishenma code is printed from the Government Online-Offline Shanghai self-service machine.

The new service has proved popular among local seniors since it was launched on August 10.

Hundreds of people are applying for the offline codes every day at the Xinzhuang Town Community Service Center in Minhang District.

Foreigners currently cannot apply for the "offline codes," according to the center.

It takes about two minutes on average to get identities verified and a sheet of printed health code comes out from the machine.

The new service has helped bridge the "digital divide" for many senior citizens,  Qu noted.

Sun Huanqi, 83, acquired the "offline code" with the help of a staff member at the center on Thursday morning. "It used to be inconvenient to display the code on my phone, which is customized for the elderly," Sun said.

"In many public places without WiFi, my phone gets disconnected and the code cannot be displayed," he added.

With the printed code, Sun said it will be much more convenient for him to go to hospitals and other places where a health code is required. 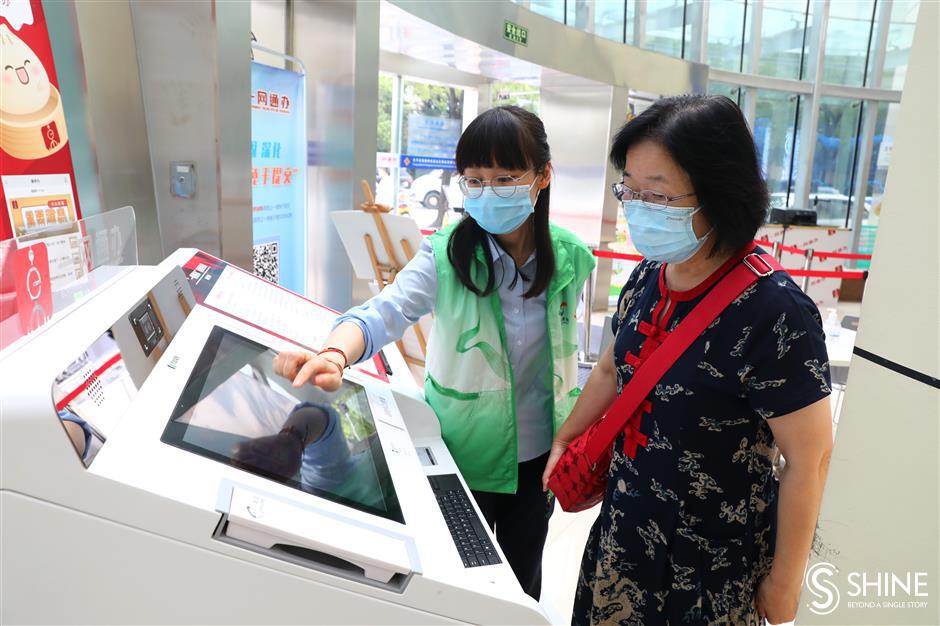 A volunteer helps Yun Weibin apply for a printed Suishenma code at the Chengjiaqiao Community Service Center in Changning District.

Chengjiaqiao Subdistrict in Changning District was among the first to launch the Suishenma printing service for its large proportion of senior population.

Volunteers are on hand beside each machine at its community service center on Hongqiao Road to guide the elderly to complete the application process.

Yu Hua, director of the center, said the elderly are more accustomed to the paper certificates compared with the digital code.

Zhao Yongdi, 75, said she went to the center to apply for the "offline code" as soon as she learnt about the new service on WeChat.

"Though I can operate the phone, it is still troublesome to display the digital health code from time to time," she said. "It needs to be reapplied for and re-verified regularly."

Her neighbor Yun Weibin, 66, said the health code is essential for seniors, who often need to go to hospitals and banks.

"When the code malfunctioned, I had to ask for help, which is embarrassing and tiring," Yun said.

"The application process for the printed code only takes several minutes with the help of a volunteer," she added.

Meanwhile, the mobile Suishenma code has been optimized to prevent screen capture. A dynamic time is now displayed on the code page for inspection staff to check whether it is the effective real-time code or an invalid screen shot.

Shanghai has ranked top among Chinese cities in terms of e-governance standards. The Government Online-Offline Shanghai platform was ranked as one of the best examples of urban governance by the United Nations in 2020.

The unified platform, along with the Suishenma and electronic license, has become a key tool to drive the urban digital transformation of Shanghai, according to the city government.

An international version of the platform was launched in November 2020 to meet the rising demand of local expats. Another special version for the elderly has also been released. The platform now has more than 54 million individual users and 2.27 million companies. 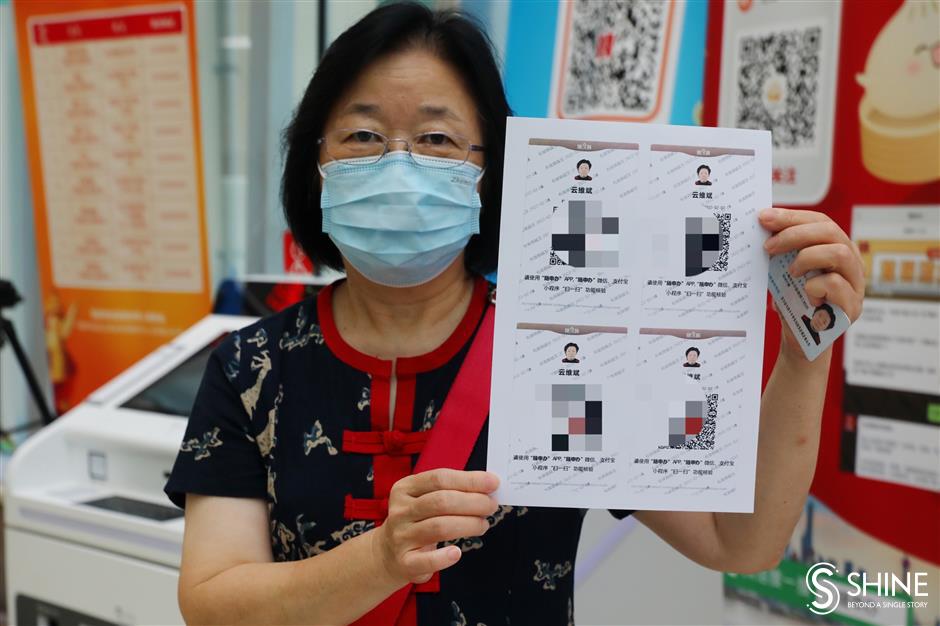