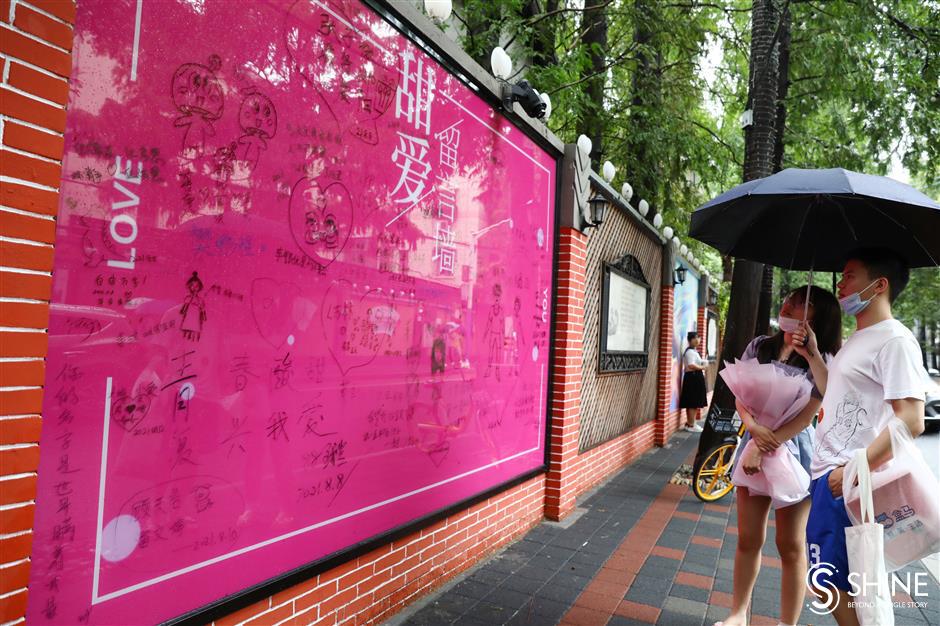 A couple read declarations of love on Tian'ai Road on Saturday. 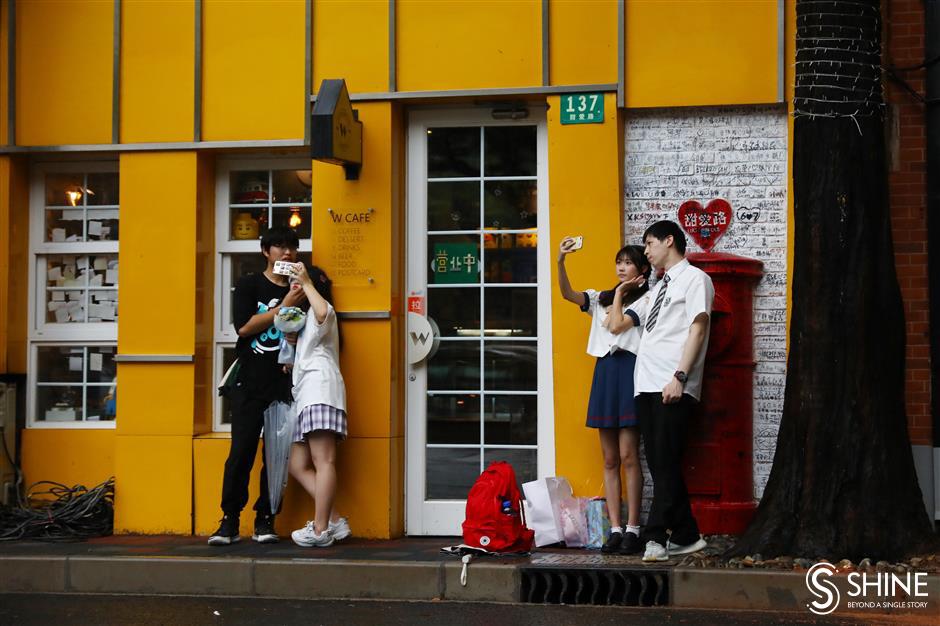 They flocked to marriage registration centers across Shanghai to exchange vows.

"Qixi is a traditional Chinese festival, and we hope to follow the love traditions," a man surnamed Qian said at the marriage registration center in Xuhui District with his wife.

The couple made the reservation online 30 days in advance and the whole process was very fast as they received their marriage certificate in 25 minutes.

"Every Chinese Valentine's Day, we witness lots of lovebirds tying the knots and this time is no exception," said a staffer surnamed Xu at the center. Xu added that the slots for Saturday had already been booked out since they opened the online reservation 30 days earlier.

In total, 1,175 couples tied the knot in the city on Saturday, according to the Shanghai Civil Affairs Bureau, compared with the normal daily 300 to 400.

The Pudong New Area marriage registration center opened an hour earlier on Saturday to cope with the extra demand.

More reservation slots have been provided and more registration windows were opened.

"I tried to secure a slot 20 days earlier, but was disappointed when I found all were booked already," said local resident Iris Wang.

To her delight, the center still issued certificates for those without reservation on the day.

A flower shop on Tian'ai Road. 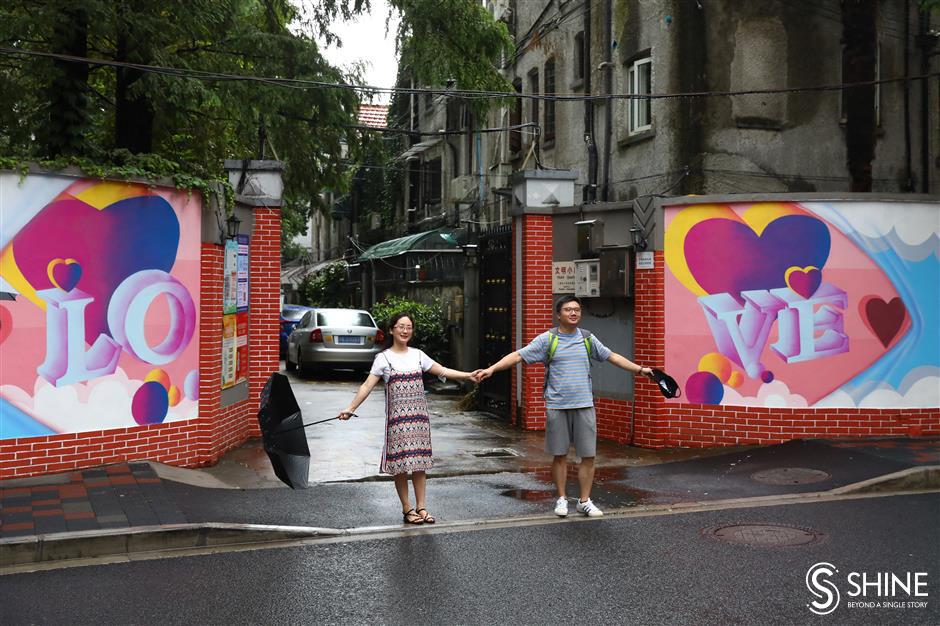 A couple in front of a gateway on Tian'ai Road.

Tian'ai Road in Hongkou District, known as the most romantic road of the city, was buzzing. Tian'ai, in Chinese, means sweet love.

Hand in hand, lovebirds walked along the street, whispering their sweet love. They posed for photos in front of an art wall and left their words of love on a graffiti wall.

Flower and catering businesses had a flourishing day as well.

"I have received over 100 online orders today, nearly four times more than usual," said a staffer at a pocket flower store on Tian'ai Road.

Flower sales for this year's Qixi doubled that of May 20, according to e-commerce platform Dingdong Maicai.

May 20 sounds similar to "I love you" in Chinese, making it one of the most popular dates to say "I do."

A bundle of 11 red roses was the most popular choice among lovebirds, followed by pink roses and champagne roses, according to the platform. 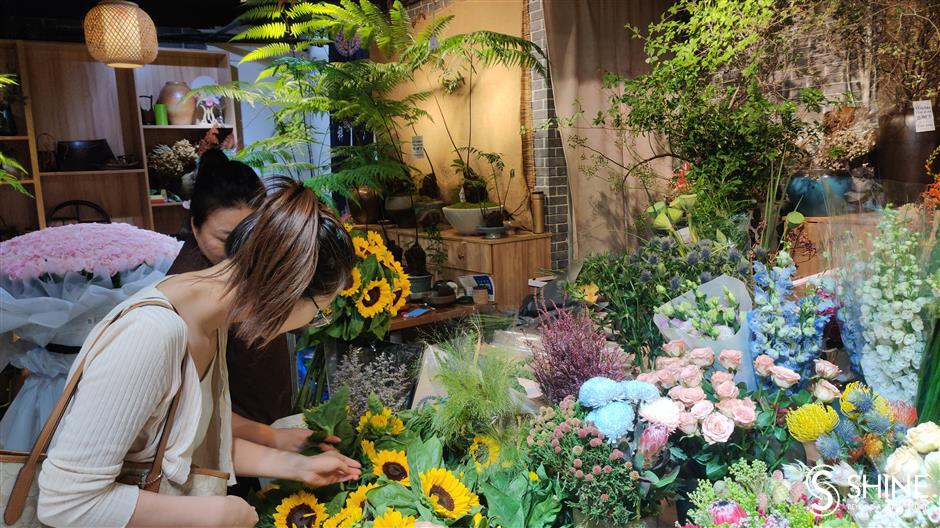 Choosing flowers at a market in Putuo District on Saturday. 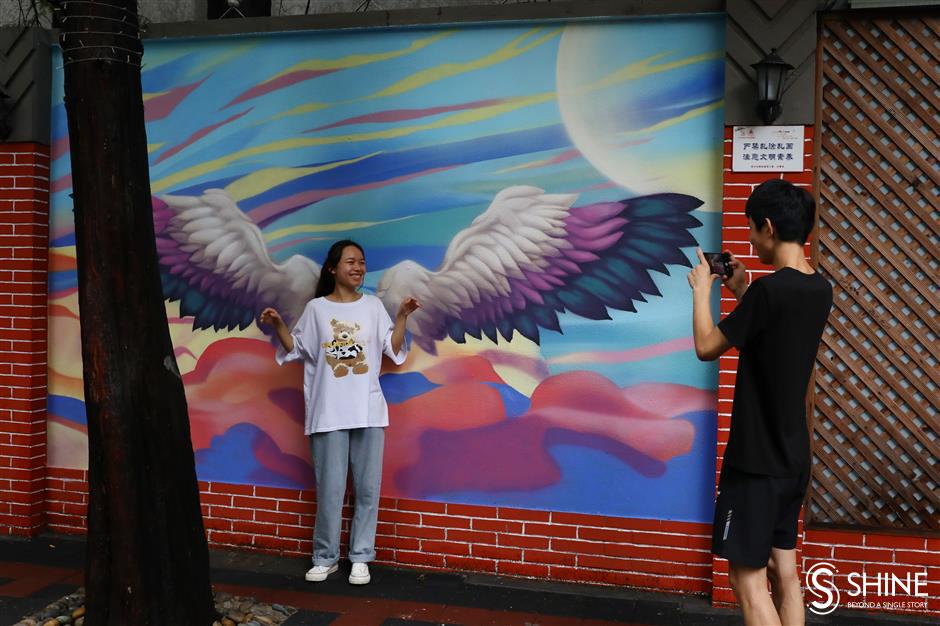 A couple utilize a mural on Tian'ai Road.

The number of searches for flowers over the past week soared 159 percent from normal, and search number of gifts such as Chinese-style cosmetics, perfume and chocolate also grew significantly, according to e-commerce platform Meituan.

Nearly 70 percent of flower buyers are those born after 1990, with Beijing, Shanghai and Shenzhen being the largest number of such buyers.

Flowers, dinner and movies are the most popular form of celebrations among local lovebirds, according to the platform.

There has been a trend that traditional Chinese festivals are highlighted, Meituan said.

The number of people making a reservation at local restaurants for a Qixi dinner three days prior to the day surged 95 percent this year compared with Qixi last year, according to its big data.

Chinese hotpot restaurant chain Haidilao said many of its outlets in Shanghai had all tables reserved for Saturday as of Friday, higher than last year's Qixi Festival.

The reservation amount at its outlet in People's Square area for the Qixi lunch or dinner doubled that of last year.

"It is a 'sweet burden' because I want to pick a restaurant and a gift that make my girlfriend happy, thus I make reservation a week earlier to secure a table," said Zhang Yong, a local resident.

"Every sweet festival requires a sense of ritual."