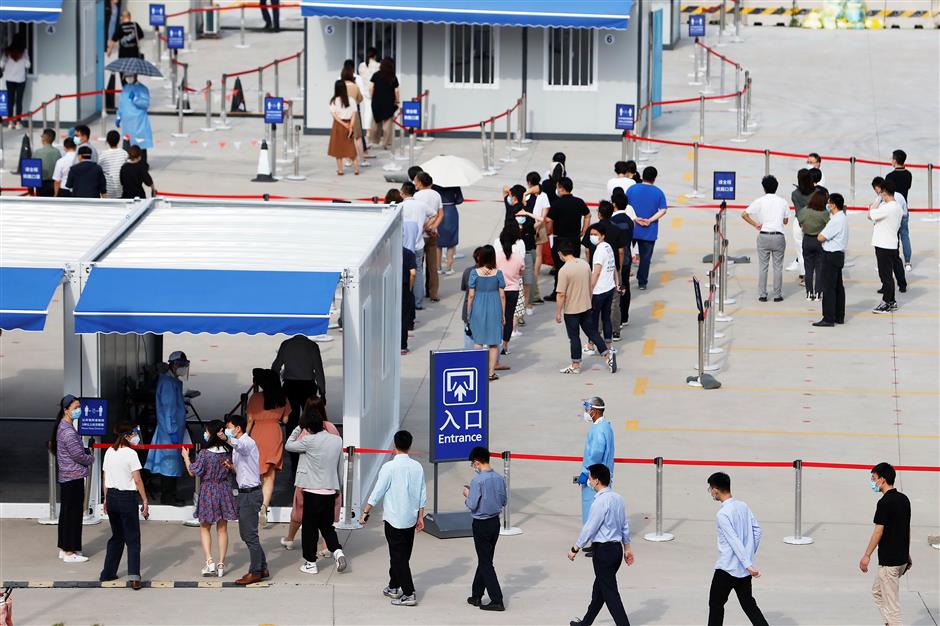 Shanghai's Pudong New Area and Songjiang District have been listed as "COVID-19-related areas" by some Chinese cities after six locally transmitted COVID-19 cases have been reported in the two districts since August 18.

Passengers must provide the reports to the airlines at the Pudong airport before boarding the aircraft, according to China Southern Airlines.

Those flying to Dalian and Dandong in northeast Liaoning as well as Harbin in northeast Heilongjiang from the Pudong airport can receive nucleic acid testing after landing at the cities' airports if they do not have existing reports.

Such testing is mandatory at airports in Qingdao in east Shandong Province, Shenyang in northeast Liaoning, southwest Chongqing Municipality, Guiyang in southwest Guizhou and Haikou in south Hainan, if the travelers departing from Pudong had no nucleic acid test report.

Guangzhou in south China's Guangdong Province has been requiring all passengers departing Shanghai's Pudong International Airport to take nucleic acid tests after landing, regardless of whether they had a report.

The free tests are conducted at the Guangzhou Baiyun International Airport right after landing, along with checks on health codes and temperatures, according to the latest COVID-19 prevention measures of the Guangzhou city government.

Passengers are allowed to leave after sample collection. They are asked to register beforehand on the "Huazhushou" WeChat program to enhance the efficiency of the testing.

Travelers from the Pudong airport are also reminded to wear masks, keep social distance, and cooperate with the registration and testing staff at the airport.

Passengers departing from Shanghai's Hongqiao International Airport do not need to take the test. The Guangzhou airport authority said it will update the stipulation according to epidemic conditions.

China Southern suggests passengers call and check with the COVID-19 prevention authority of the destination cities at least two days before traveling, because the stipulations are being adjusted every day according to the epidemic condition.

Sanya, the popular tourism city in south Hainan Island, has released one of the strictest COVID-19 prevention measures for travelers from Shanghai.

All those who have been to Songjiang District or the Pudong New Area within two weeks must receive two rounds of nucleic acid testing 48 hours before arriving in the city. The two tests must be made with an interval of 24 hours, according to the Sanya city government.

If the arriving travelers had only one report, they must receive another test after landing at the airport and wait for the result.

If the exiting report was made within a day before arrival, the travelers will be sent to a quarantine hotel and receive another test a day later. The travelers have to cover the costs.

China Eastern Airlines is offering free ticket refunds or change for flights departing, arriving or stopping over at Shanghai. The flights related to Shanghai's Pudong or Hongqiao airports before September 8 are eligible for the free refund or change, according to the Shanghai-based carrier.

There are currently five medium-risk areas in the city, four in Pudong and one in Songjiang District. The residential complex in Songjiang is related with a female medical worker reported infected on Wednesday.