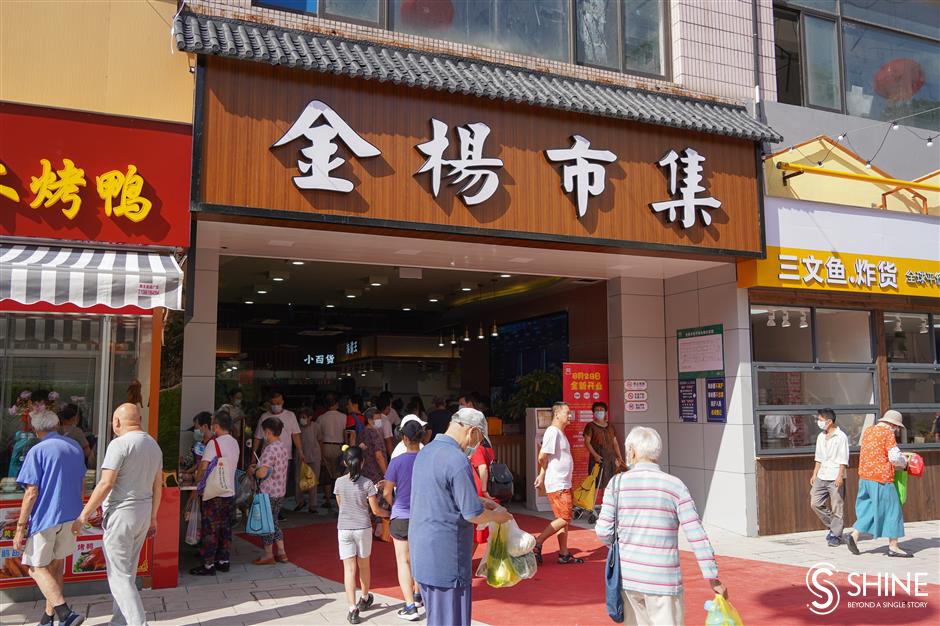 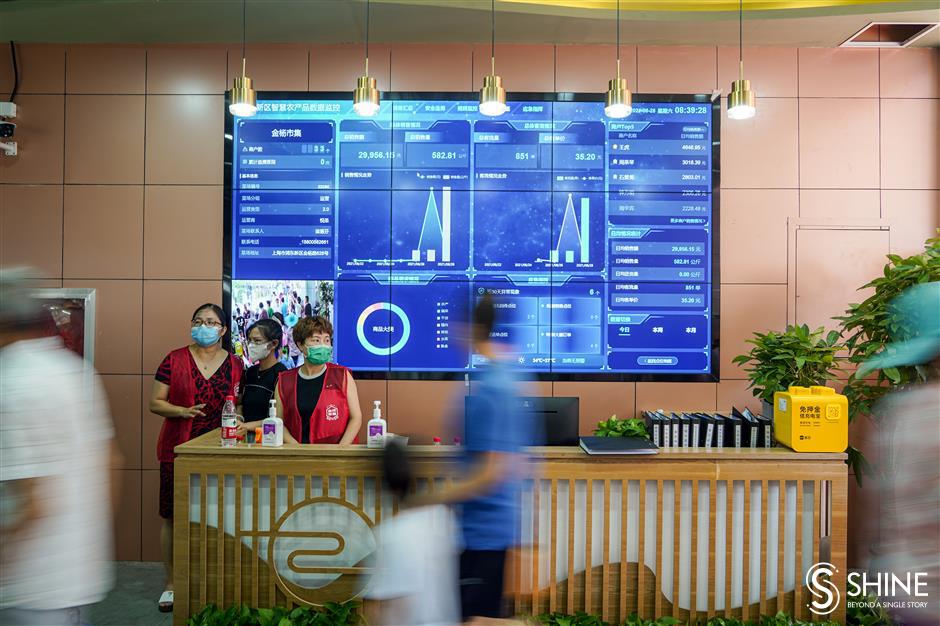 A digital screen at the entrance.

Zhang Guifen was all smiles when she entered the revamped Jinyang Market with a straw basket on her arm, a gift for first-day visitors.

"It has taken on a new look," the 67-year-old said, as she received a mask from staff at the entrance and put it on. "See, there is stricter management.

"I've been living here for more than 40 years. Previously, the entrance was thickly dotted with street vendors. Now, they are gone, and it's cleaner and brighter. I'm so pleased to see such changes. What's more, as I arrived, the staff gave me a basket, telling me to use it for environmental protection."

The Jinyang Market, formerly known as Zaozhuang Market, opened in 1998 at 628 Jinyang Road in the Pudong New Area. It initially had about 1,667 square meters on the first floor of the Jinyang No. 1 Shopping Mall as a wet market, and later extended to an alley outside to become a comprehensive market.

Though it provided convenience for nearby residents, complaints also emerged. Inside, vegetables, meat, fish and snacks stalls were next to each other in a dingy space, with dirty water flowing on the ground and foul smells in the air. Outside, vendors put up tents selling daily commodities and offering some repair service. Quite a few of them didn't have business licenses.

Renovation work started about three months ago, and it reopened to the public on Saturday.

It has embraced digital intelligence by introducing a comprehensive smart system for better management of basic market data, food safety traceability, as well as rapid inspection of agricultural residues.

A screen showing the market's total revenues, total visitors and other information is installed at the entrance. At the reception desk, staff check visitors' temperatures and make sure they wear masks.

Every retailer in the market is connected to the smart system. On one side, their business conditions are monitored, and on the other, the market will help them deal with pricing and stock, according to the market's operator Shanghai Yuesheng Business Management Co. 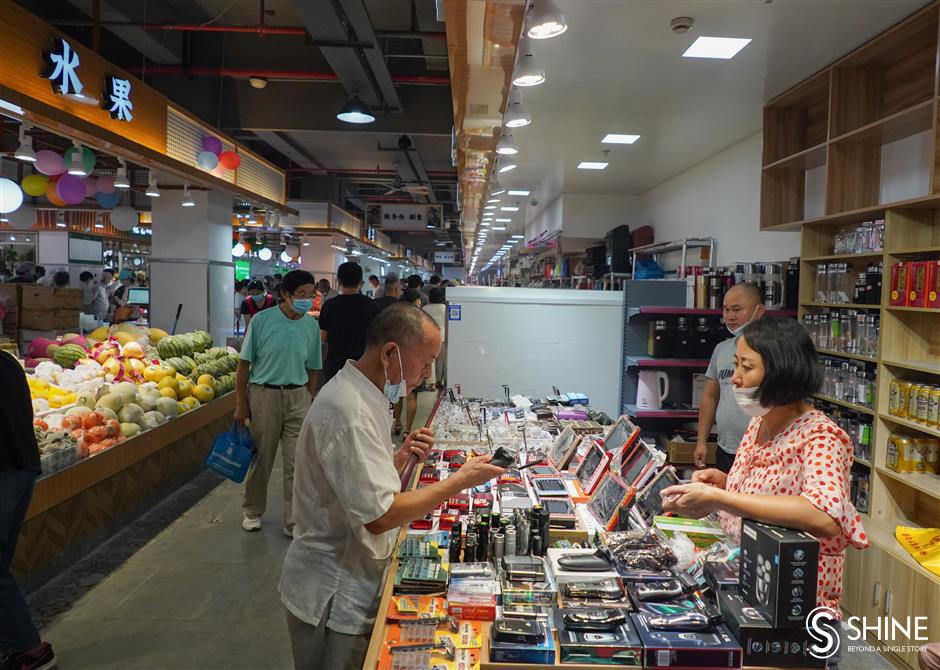 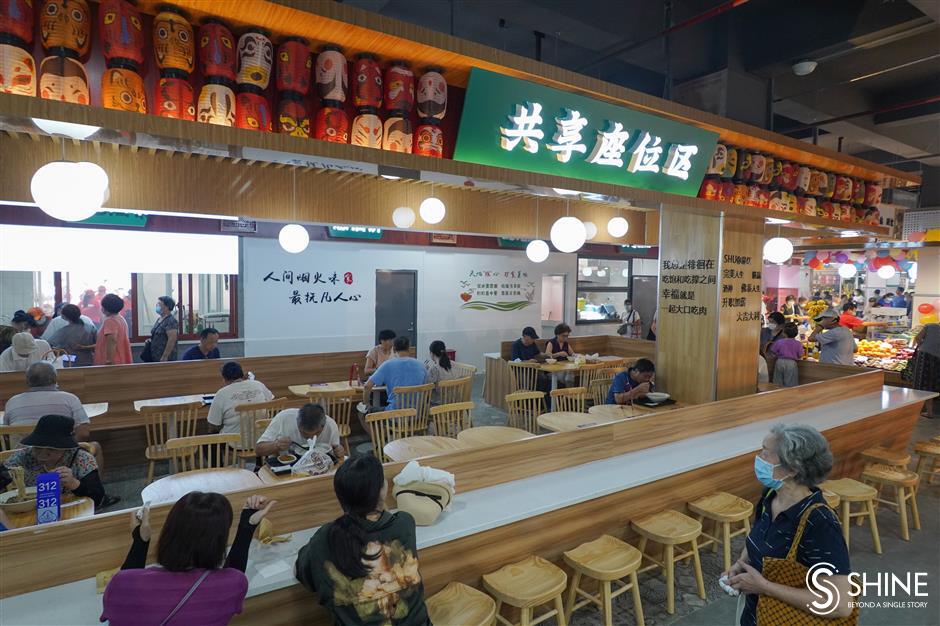 The place for people to have breakfast.

Stalls are properly displayed according to their categories.

"Customers have increased by one-third in number," said Wang Hu, owner of a vegetable stall.

"I came here in 2015," he said. "Now, my stall is bigger, and I found the market is cleaner. We are required to follow strict standards such as garbage sorting, and most importantly, we are told to offer better service to customers."

In particular, stalls selling commodities and repairing home appliances have been introduced to the market. Most of them are laid-off workers or low-income families. They need a place to make a living, and nearby residents also need their service.

"We sell small components for water heaters and cooking utensils, and offer repair services," said a woman who works for a grocery store of laid-off worker Wu Guoxing. "Residents said they had nowhere to buy these things, and they really need us.

"Previously, we just put up a stall on a tricycle outside the market. We were worried about bad weather. Now, we don't need to move around. We have a place here."

There is also a small dining area in the market for people to relax and have their breakfast. And the market provides free water, emergency medicines and a food safety inspection service.

It is discussing with the local subdistrict extending business hours to enrich local people's nightlife.

Under the plan, stalls will be erected in the alley outside the market in the evening to sell snacks, and there will be activities from time to time to promote Pudong's agricultural products such as "8424" watermelons.

Also, it is planned to encourage local students to take part in a graffiti competition to add vibrant colors to the market walls. 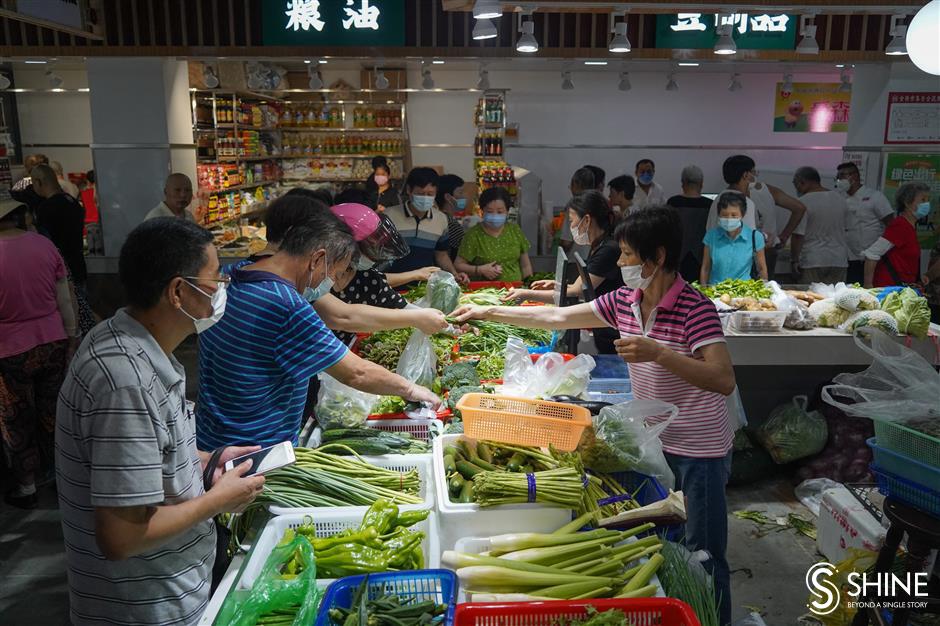