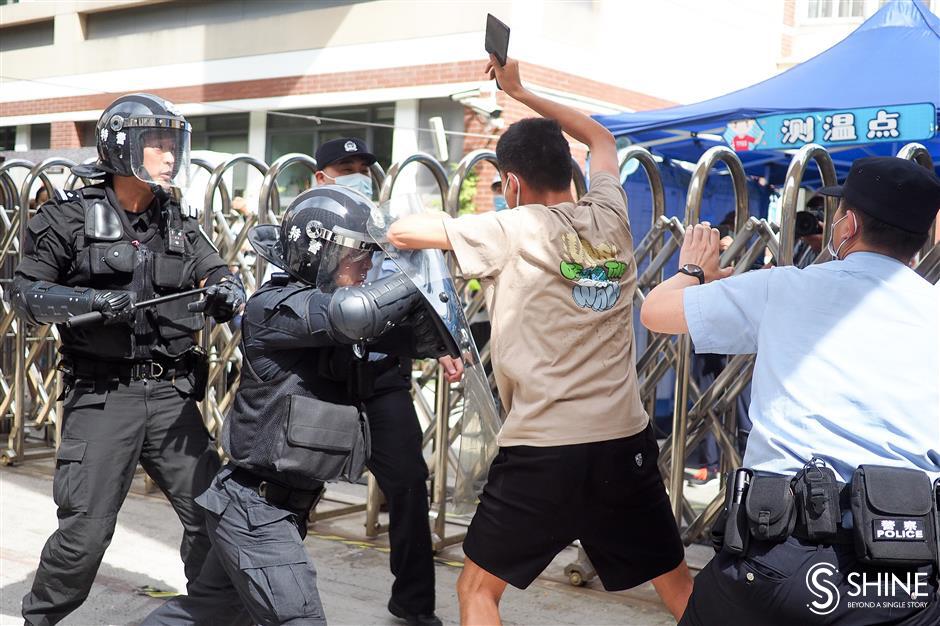 The Yuyuan Road No. 1 Primary School carries out a drill in which a man, wielding a knife, carries out an attack on the school, on Monday.

A middle-aged man, carrying a knife, was shouting at the gate of the Yuyuan Road No. 1 Primary School in Changning District while trying to climb over the fence to get in on Monday morning.

Several police officers, armed with batons, arrived soon. They immediately warned the man to lay down his weapon and rushed to stop him.

The man clashed with the police, ceaselessly waving his knife. Special police, bearing batons and riot shields, then joined the officers. They rounded up the man, finally managing to control him with joint efforts. 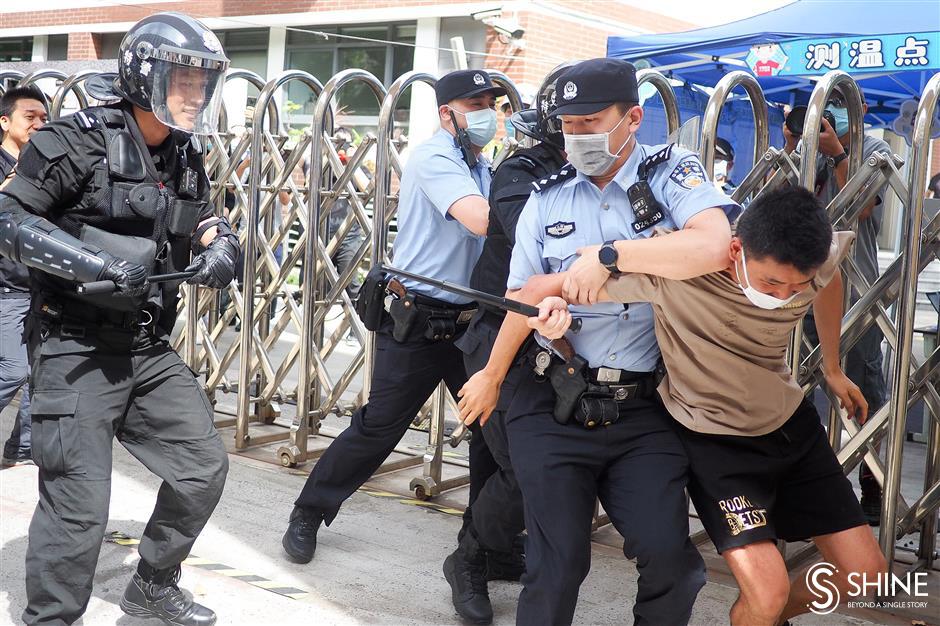 The knife-wielding man is controlled by police during the drill.

This was not a real incident of someone violently attacking a school, but part of a safety drill launched by the school and the Changning branch of the Shanghai Public Security Bureau to prevent school violence and improve the school's ability to respond to campus emergencies ahead of the new semester, which kicks off on Wednesday.

Changning police authorities have equipped the school with a network for unified defense against violent cases, according to Zhang Jia, an official of the Jiangsu Road Police Station.

"If school security guards find any suspicious people loitering around or wanting to enter the school, they can immediately contact the public security bureau through the network," Zhang said. "On receiving the alarm, we will promptly inform the nearest police station to dispatch officers to the scene." 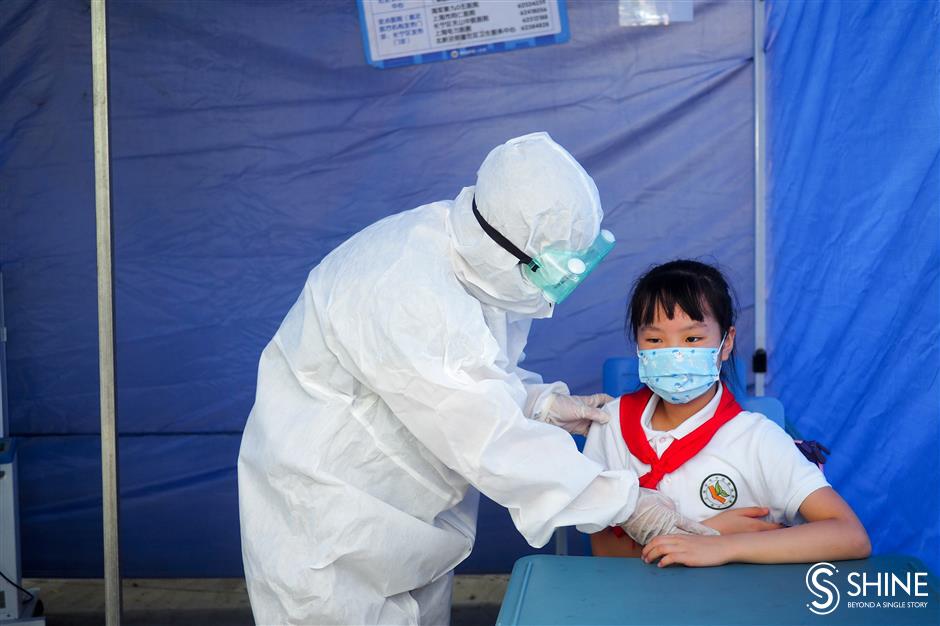 A student is found with abnormal temperature during the drill at the Yuyuan Road No. 1 Primary School.

Another part of the drill was set in a scenario where a girl student is found with abnormal temperature during morning screening for coronavirus prevention and control.

Following the outbreak of the COVID-19 pandemic, schools in Shanghai have set up infrared screening machines at the gates to check students' temperature.

During the drill, the school faculty immediately took the "feverish" student to a tent near the gate for temporary isolation and observation. Meanwhile, guards continued to maintain order at the gate to prevent panic and chaos arising from the case.

Ma Qiong, principal of the school, said the school has established a mechanism to handle such an emergency.

"If students are found with abnormal temperature in later checks during the observation, we inform their parents to take them to hospital," said Ma. "We follow up their medical treatment in hospital, and they are only allowed to return to school after they recover, with a negative nucleic acid test result." 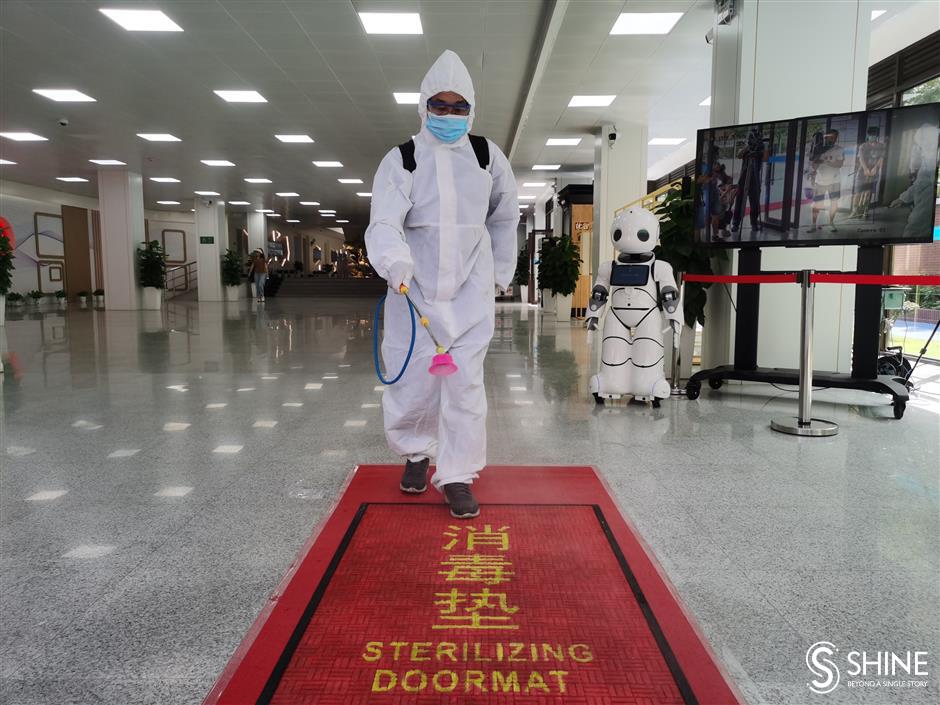 A staffer sprays disinfectant on a carpet at the Luwan Middle School in Huangpu District on Monday. 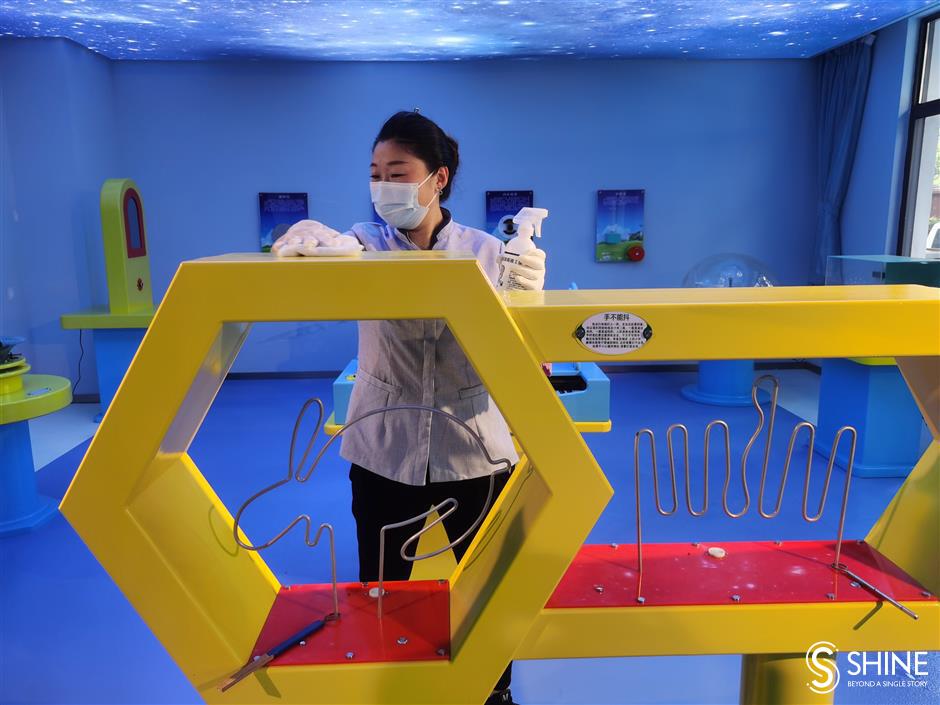 A staff member cleans an activity room at the Luwan Middle School.

Other schools in Shanghai are also ready to welcome students back to campus.

At the Luwan Middle School in Huangpu District, teachers played the roles of students in a drill to test its daily pandemic prevention and control measures.

Students need to keep distance when waiting to enter the campus and disinfect their hands at automatic disinfectant machines. When they enter the teaching building, they will walk on a carpet soaked with disinfectant, and an infrared screening machine will check their temperature. Those found with abnormal temperatures will be guided to a room for further observation.

Students' lunch will be served in classrooms with boxed meals while teachers can take their meals back to their office to reduce gathering. 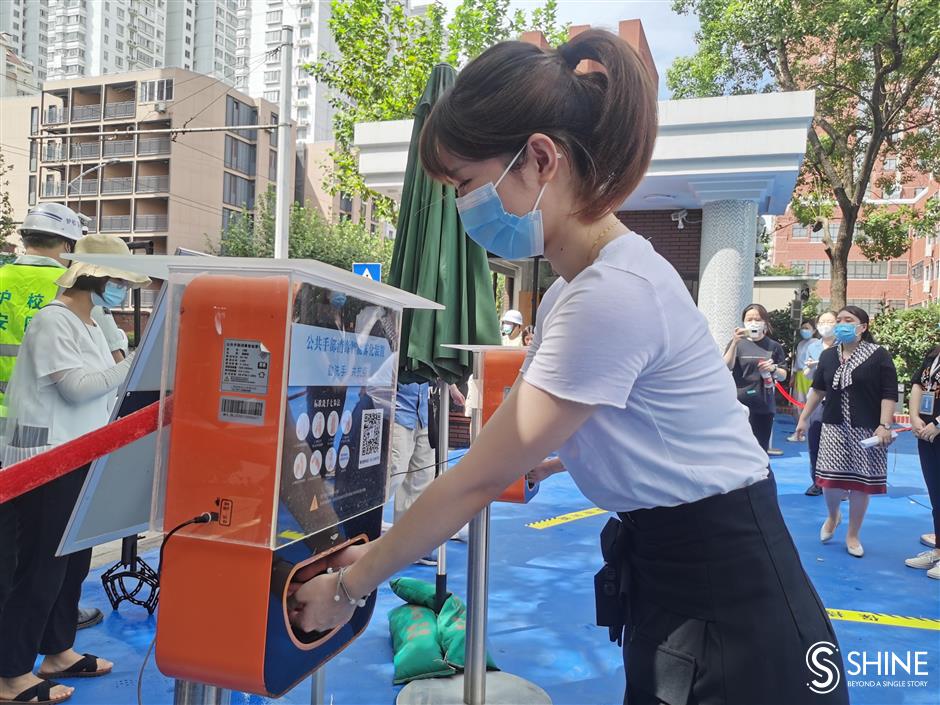 A teacher acts as a student as she goes through the pandemic prevention procedure at the school. 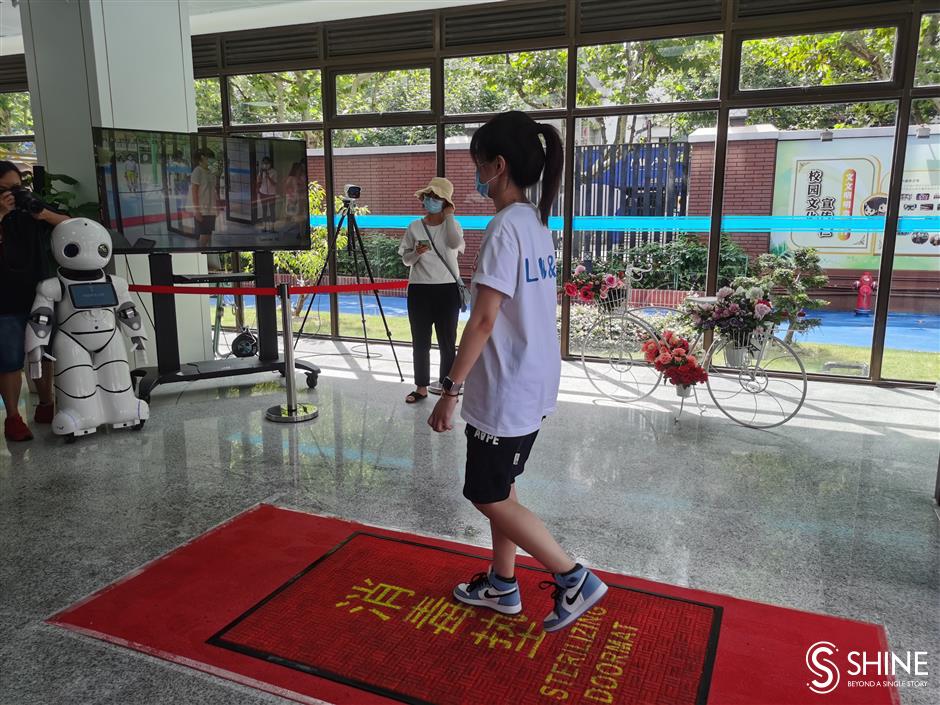 A general view inside the school during the drill.

The school faculty also cleaned and sterilized all classrooms on Monday. A robot was used to disinfect public spaces in the school.

"The robot is new and will work after teachers and students leave the campus every day," said Zhang Yi, principle of the school. "It can spray disinfectant while moving around. It can detect obstacles in its way and make detours and can also take the elevator to sterilize space on every floor."

The school has also prepared a package of pandemic prevention items for new students, including masks, handwash liquid, disinfecting towels and a guidance on daily measures for coronavirus prevention. 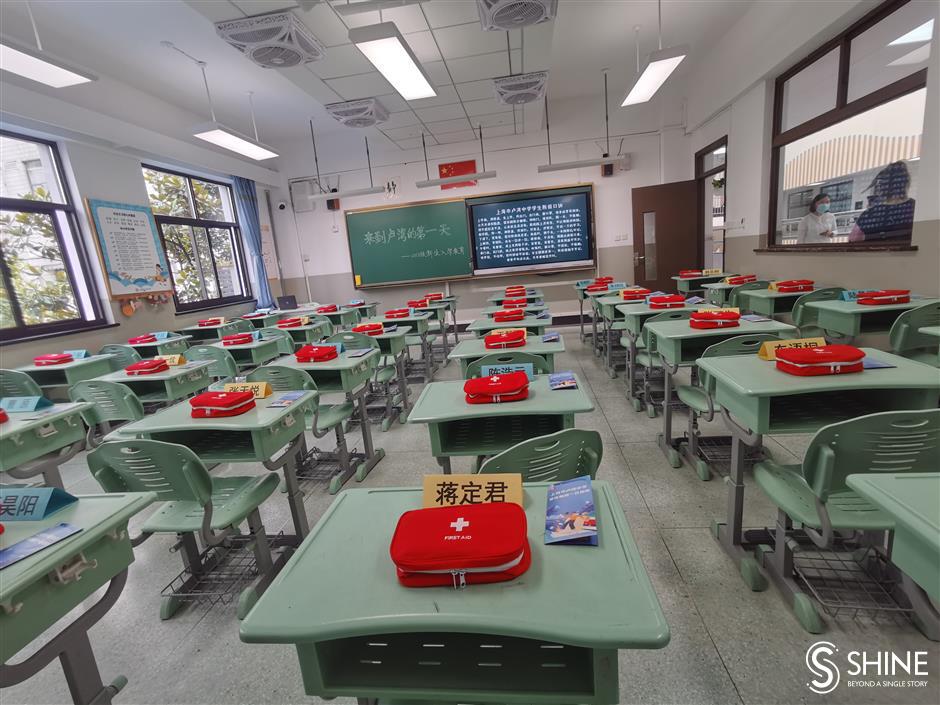 The school has put packages of pandemic prevention items on the desks of new students. 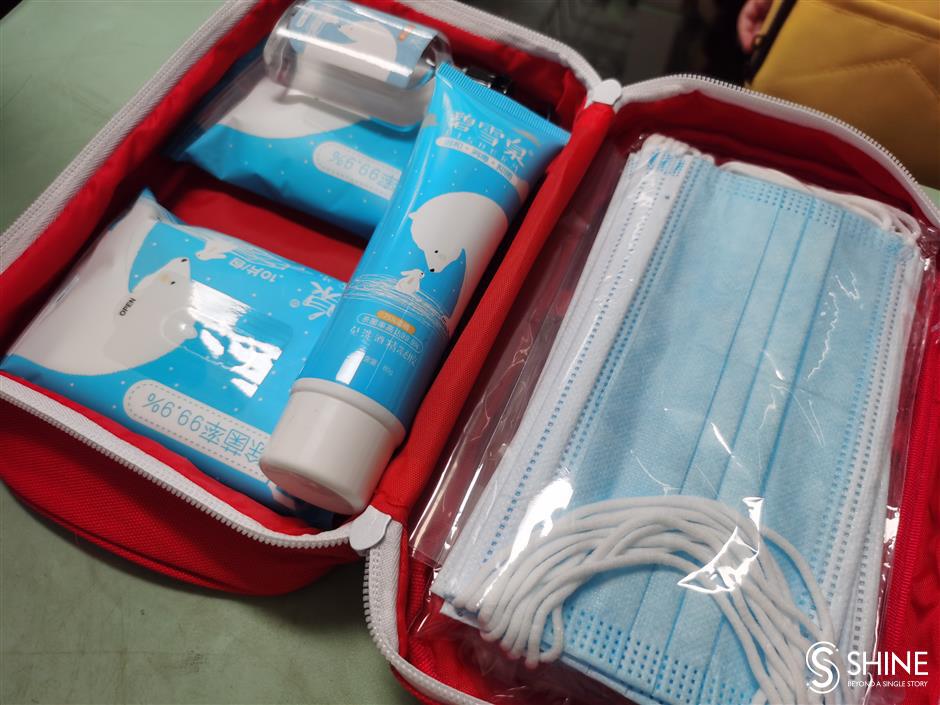 The items in the pandemic prevention package