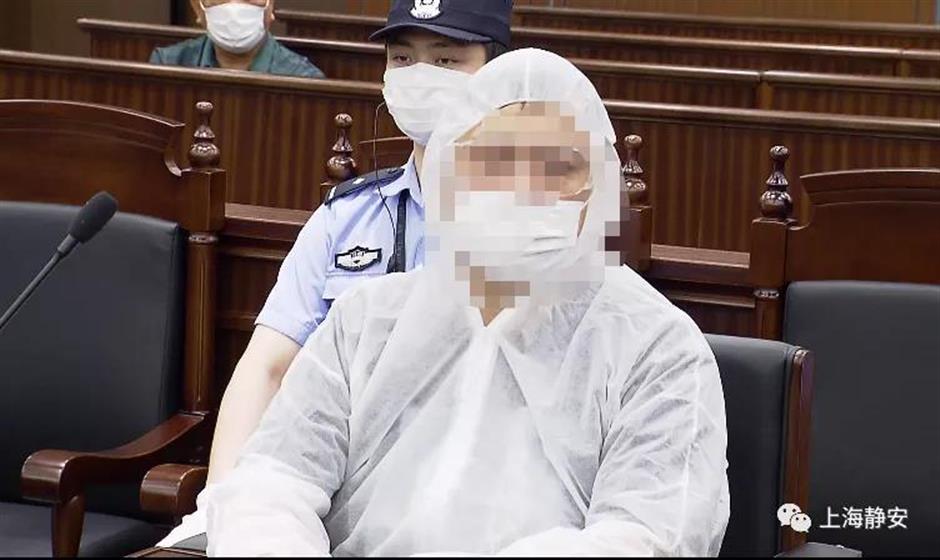 Wang seen in court during his trial

A taxi driver, who rammed into a pedestrian before escaping and subsequently broke the glass door of a museum in downtown Jing'an District, was sentenced to five years in jail for endangering public safety by dangerous means, the district's people's court said on Tuesday.

The 35-year-old cabbie, surnamed Wang, hit a passerby among many pedestrians at the intersection of Nanjing Road W. and Chengdu Road N. around 12pm on January 6. He then fled the scene, heading to the Shanghai Boards and Cards Games Culture Museum, where he smashed the glass door.

Fortunately, the person who was hit didn't suffer any major injuries.

Wang was a lottery addict – spending thousands of yuan each time, which led to heavy debt. To pay off his debts, he sold two family apartments, according to the court.

Frustrated, his wife filed for divorce and separated from him.

Despite the separation, Wang continuously harassed his wife by phone and WeChat, forcing her to block him. Not satisfied, Wang then turned to harass his wife's colleagues.

After repeated attempts to reconcile with his wife failed, Wang took the drastic and crazy step on January 6.

During the first trial session, Wang argued that he had been taking sleeping pills for a long time, and his brain was blank when the crimes were committed.

Judicial authorities then hired a relevant appraisal agency to evaluate Wang's mental state, which ruled that he did not suffer from any mental illness.