Residents in Chongming District will soon have a more stable and reliable power supply, as the setting of a soaring power tower of a 500-kilovolt cross-Yangtze-River project was completed at 11am on Friday, according to the State Grid Shanghai Company.

The 204-meter-tall tower, one-third of the height of Shanghai Tower, set the record for the highest power grid infrastructure in Shanghai to date.

The total length of the strain-resistant section of the 500-kV power transmission project is about 2,894 meters, and the span across the Yangtze River is about 1,690 meters. A total of 1,365 tons of materials were used in the tower body, according to State Grid.

In order to erect the iron tower firmly on the soft mud flat, each pile of the iron tower foundation was set 52 meters underground – about the depth of 15 floors. The amount of concrete used is three times more than on the tower above ground, said Yu Dong, director of the project.

To ensure the project's on-time completion, State Grid has adopted many high-tech measures, such as cameras, drones, smart rods and an electronic fence management system.

"The drone and multiple sets of wireless cameras installed on poles can capture details that are hard for workers on the ground to find out on the 204-meter tower," said Xia Yanfeng, project manager at the State Grid Shanghai Power Construction Company. "The installation of smart rods in nearly 20 important positions on the tower, through advanced measurements, sensing and digital twin technology, can monitor the full cycle of data for the transmission tower's operating status, thereby improving the accuracy of construction." 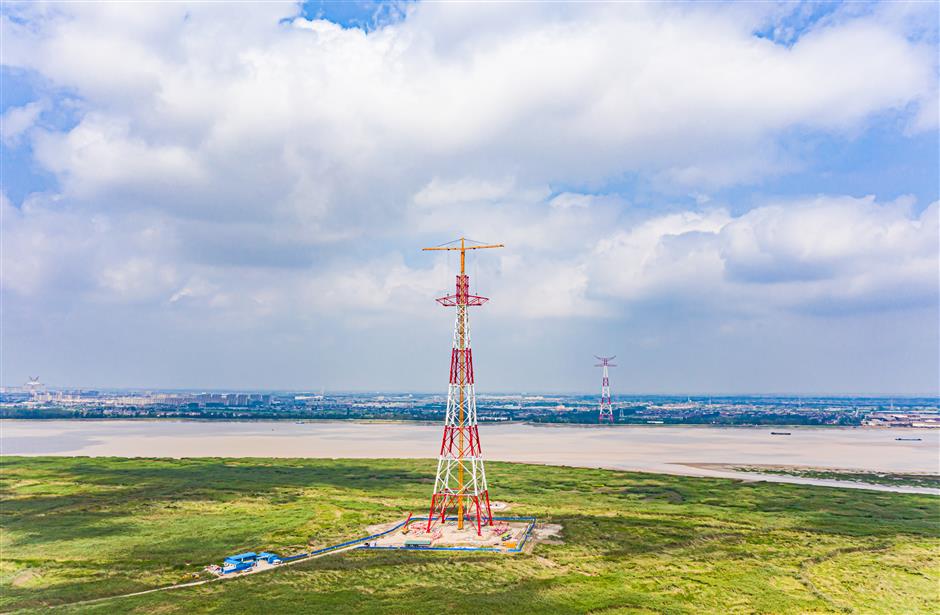 A total of 1,365 tons of materials are used in the tower body.