Expats get the lowdown from legislators on government activities 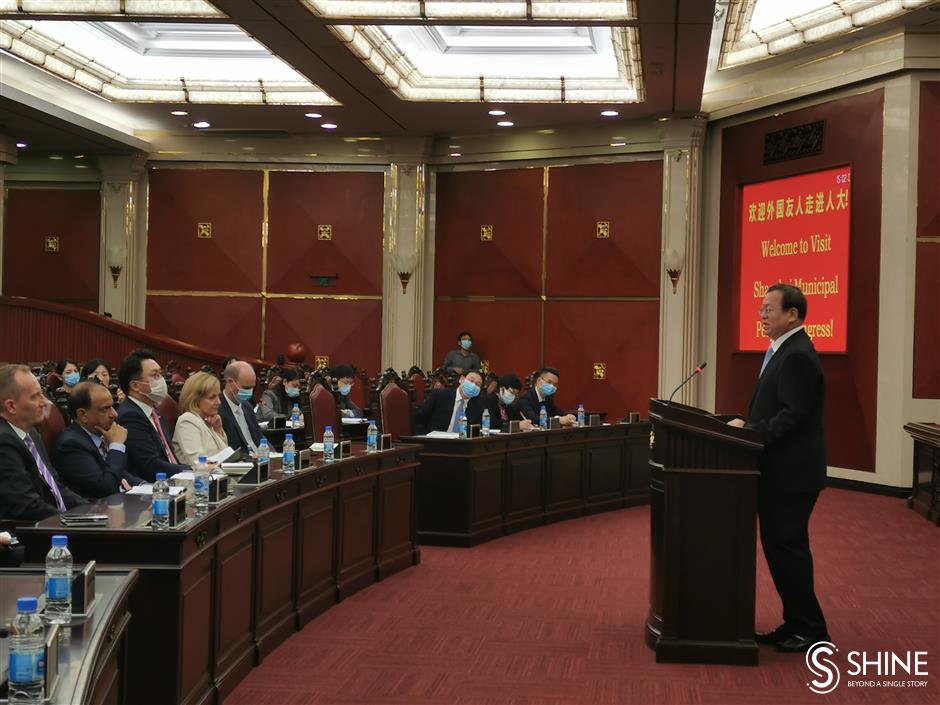 Twenty-one expats from foreign enterprises and universities in Shanghai sat with the city's legislators on Thursday.

They were given a briefing on the work of the congress and raised questions of concern in the conference hall of the standing committee of Shanghai People's Congress, the city's legislature.

The guests were informed of the functions of the people's congress and its work in recent years to improve the business environment, facilitate the protection of public health from the COVID-19 pandemic and enable people from all walks of life to take part in the legislation process.

After the briefing, the guests asked questions about how Shanghai People's Congress interacts with legislatures in other provinces, how multinational companies can contribute to China's vision of common prosperity and whether China is open to more joint education projects such as NYU Shanghai. Legislators answered their questions.

Guests said they enjoyed living in Shanghai and appreciated the opportunity to have a close-up look at the work of the city's legislators.

Karolina Horoszczak, vice president of corporate communications and public affairs of IKEA China, said she was very happy and honored to be invited to attend this event.

"It's a fantastic experience for me to understand much better how the congress works, what it means for Shanghai and for people living here," she said. "As a foreigner who has been living here for six years, I would be also very happy to share more of my opinions, perspectives and experiences to contribute to further development of this fantastic city."

Rajnish Sharma, head of delivery and operations of Infosys Technologies China Co, who has been in Shanghai for about eight years in the past 13 years, said the event helped him understand "what's happening behind the scenes."

"I learned about how inclusive the government is and was especially impressed by how the city reacted to the COVID-19 pandemic through active legislation work," he said.

Sharma said this meeting was also a good starting point for foreign companies to bring forward suggestions to local authorities.

Chen Jing, Vice Chairperson of the Standing Committee of Shanghai People's Congress and President of SPAFFC, delivered a welcome speech to the guests in which he greeted some "old friends of the city."

"I was very fortunate to have the opportunity to visit Air Liquide about eight years ago where I learned a lot of work safety, and just this morning I visited the company again with some deputies of the people's congress and government officials to learn about their best practices in work safety for the revision of Shanghai's regulations on work safety that is on our work agenda next week," he said.

Nicolas Poirot, Air Liquide China president and CEO who has been living in Shanghai for more than 22 years, said he enjoys living in local communities in Shanghai because the legislators manage to visit every district, community, street and compound to keep people informed.

Gao Deyi, Chairperson of the Foreign Affairs Committee of Shanghai People's Congress, said expats are welcome "anytime and anywhere" to bring their ideas to the city's legislature.