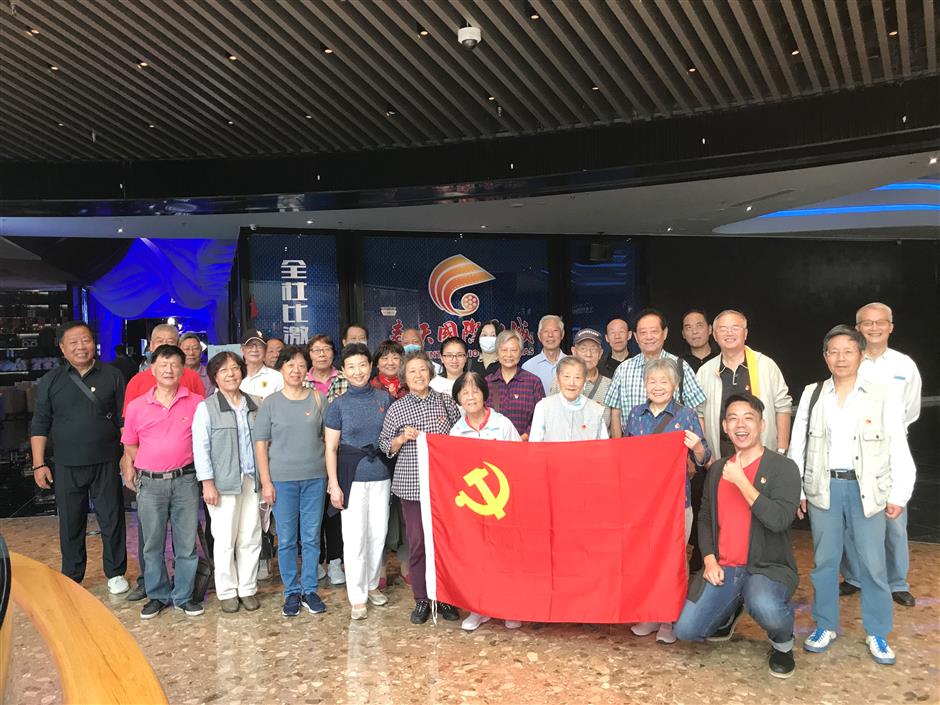 Chen Xiang (right on the first row) poses for a picture with senior residents after a community activity.

Chen introduced himself in a video, playing guitar at the Reeb Innovation Industrial Park, the renovated site of an old beer factory.

"I wanted to resonate with viewers and help them learn more about Meilong," he said.

In another 4-minute rap song video entitled "Love and Shanghai," Chen holds a loud speaker to sing a song about the scenic sights and conveniences of living in Shanghai.

The competition, open to both the disabled and non-disabled, was initiated by the federation to promote public awareness of how the physically impaired can function as part of the social fabric of communities.

The competition, which started last November, ended last month after interruptions due to the coronavirus pandemic. The final required contestants to do livestreaming sales because video experience is often key to making a living.

As an amateur music maker, Chen composed the song and its lyrics, and did all the film editing by himself, with some help from colleagues for the filming. "The schedule was tight and we were all occupied with daytime work," he said. "So I tried to harness ideas quickly as they came to me."

Chen had been thinking about how he could convey themes about Shanghai. Then, one night when he was browsing through short videos online, he saw a performance by now dead Shanghai singer Wang Yongsheng.

"I remember being on stage with him once, and I thought it would be a fitting tribute to him if I sang in his style," Chen said.

His short videos led him to the contest final, where participants were asked to do livestreaming sales for three hours. Their performances were to be rated on sales and audience numbers, and on their promotional skills in front of the camera.

The participants received product lists two days ahead to allow them time to prepare their sales pitches. Chen had to sell a dozen products, including chia seed biscuits, milk, pepper sauce and pasta.

He won third place with sales of more than 1,000. He was surprised by the result and gratified about the support he received.

"There were some older residents in our neighborhood who didn't really understand how a smartphone works, but for the daily voting session, they always remembered to click the button for me when the channel opened," he said.

"I agree with what the competition was trying to do," he said. "I think it will have a positive influence on disabled people." Chen has personal experience with the disabled. He helps care for a visually-impaired mother.

He had served in the army and was part of the rescue effort for the devastating earthquake in Wenchuan, Sichuan Province, in 2008. He suffered injuries during the mission and was invalided out of the army. Returning to civilian life, he worked at a railway station, an advertising agency and at a fire department. He took up a job as a community worker in Meilong a year ago.

"I like dealing with down-to-earth issues," Chen said. "I remember interviews where I was asked about grand goals. But when I interviewed for the job at Meiling, I was asked how I would solve a parking problem in the community. I knew that was the job for me!"

He added, "Besides, our family has community workers visiting to help take care of my mother, so I was familiar with such social services."

His job entails an array of services, like collecting information, communicating with residents about governmental policies and conducting disease prevention and control. He brings a sense of great responsibility to each task.

"For me," he said, "work is more than just collecting a salary. It should be something that gives a sense of self-fulfillment. Every small, positive thing we do counts. I feel happy when an older resident calls to tell me her phone doesn't work, and I fix it."

When he gets home, he frequently shares his daily experiences with his mother, who takes an active interest in his work. In fact, she is one who is always glad to help.

Chen told of a fire that broke out in a bicycle shed in the community where he lived. His mother was the first to spot it and alert people to move their bikes out.

"She managed to help despite her poor eyesight," he said. "This is just how enthusiastic she is."