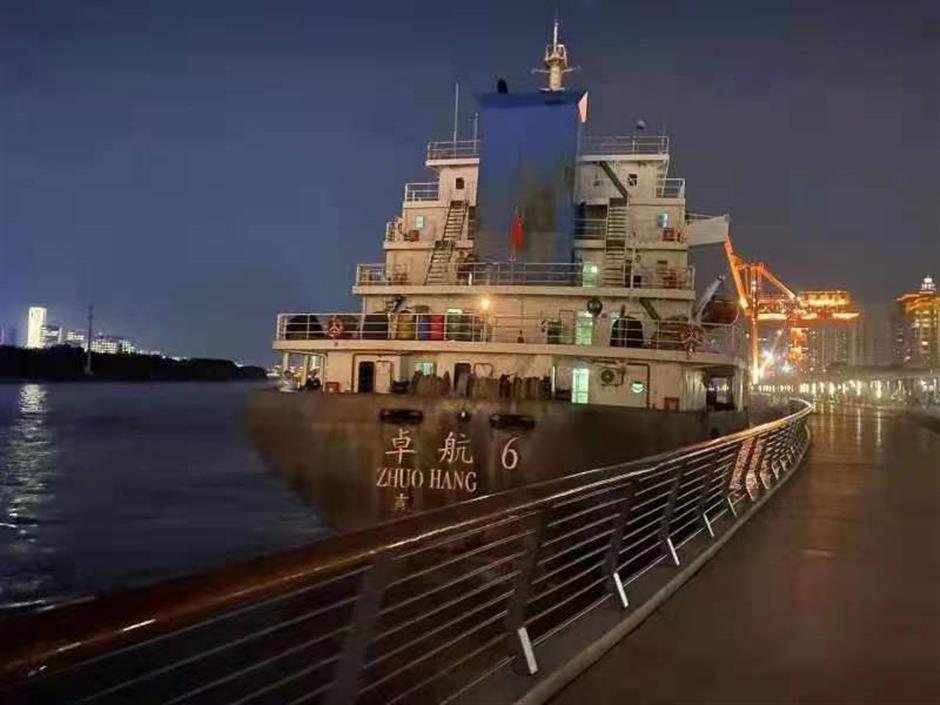 The Zhuo Hang 6 is parked along the Xuhui riverside waterfront on the Huangpu River on Wednesday.

A ship, "Zhuo Hang 6", crashed into the Xuhui riverside waterfront terrace when passing Longhua Bend on Wednesday due to tidal influence, according to the command center of the Shanghai maritime safety authority.

The accident took place at 8:18pm on Wednesday night. There were no casualties in the accident, with no leakage found from the ship. However, about 25 meters of railing along the Huangpu River on the Xuhui riverside waterfront was damaged, according to authorities.

Two maritime patrol boats were dispatched by the Huangpu Maritime Bureau after the accident for investigation.

After a preliminary investigation, authorities said the accident was caused by an operational error when the ship entered the waters of Longhua Bend during low tide, which led to the ship instantly losing its drag force and brushing the riverside.

This is the third time that a ship has crashed into the riverside along the Xuhui waterfront area.

Hard natural conditions and crews' operational errors are two main reasons contributing to the frequent accidents in the Xuhui riverside waterfront area, according to a report in the local Jiefang Daily on Thursday.

Regardless of whether the tide is rising or falling, the waters at the Xuhui waterfront, flowing in all directions, are pressed from Pudong to Puxi, which leads to such frequent collision accidents, authorities were quoted as saying in the report.