Medical experts at Shanghai International Peace Maternity and Child Health on Friday announced a successful surgery, where a huge tumor was removed from a fetus' mouth while maintaining placental circulation.

The newborn boy is in stable condition.

The mother went to the hospital for a prenatal check for her second baby. During the 23-week deformity check, doctors found a 4-centimeter mass in the fetus' mouth.

Doctors excluded the possibility of inherited diseases and suspected it was tumor. They worried about the risk of suffocation during delivery if the tumor grew along with the fetus.

But the mother was determined to keep the baby. After a subsequent checkup, the tumor was believed to be benign.

During the 36th week of pregnancy, doctors found the tumor had covered the entire mouth of the fetus, which risked blocking the airway.
Traditionally, a surgery is conducted after the baby is delivered. However, this child may have suffocated upon delivery, so doctors decided to perform the EXIT procedure.

A 20-member team consisting of medical staff from different departments started the surgery at 9:30am on Thursday.

Five minutes later, the fetus's head was delivered, while the rest of the body was kept in the womb.

The tumor was removed quickly and the entire fetus was delivered in short order.

The whole procedure lasted only 50 minutes. The woman lost 250 milliliters of blood, the same amount that would be lost during an ordinary Cesarean section. 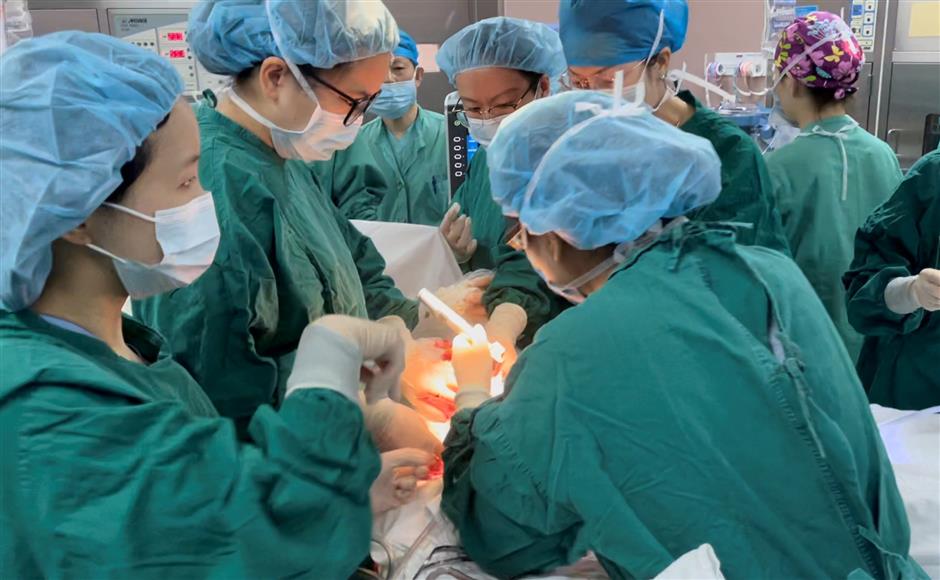