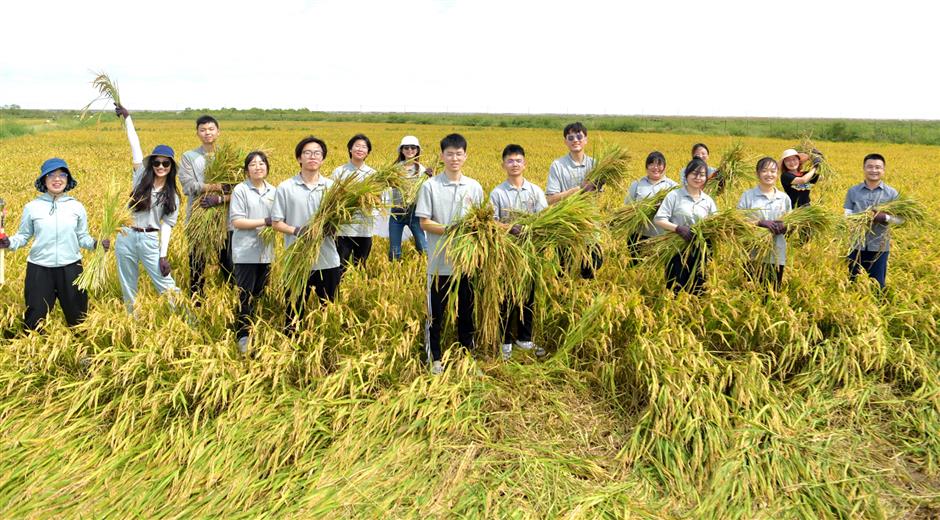 More than 50 teachers and students from East China Normal University harvested a new crop of rice on Shanghai's Hengsha Island in Chongming District along with local farmers to celebrate the harvest of "Happiness" ecological rice.

It was the third straight year that the university team grew the rice on the island soil, whose fertility they have improved, leading to a bumper harvest.

The "Happiness" ecological rice is an achievement of the soil improvement research conducted by the university team in the siltation and reclamation area. Last year, the yield per unit area of late-season rice in the improved field increased by up to 128 percent compared with that in the normal control field.

"Seeing our rice grow well with full grains, neighboring farmers all came to ask about our cultivation methods. They established contacts with us on WeChat to seek advice," said Deng Hong, the project leader who is an associate professor from the university's School of Ecological and Environmental Sciences. 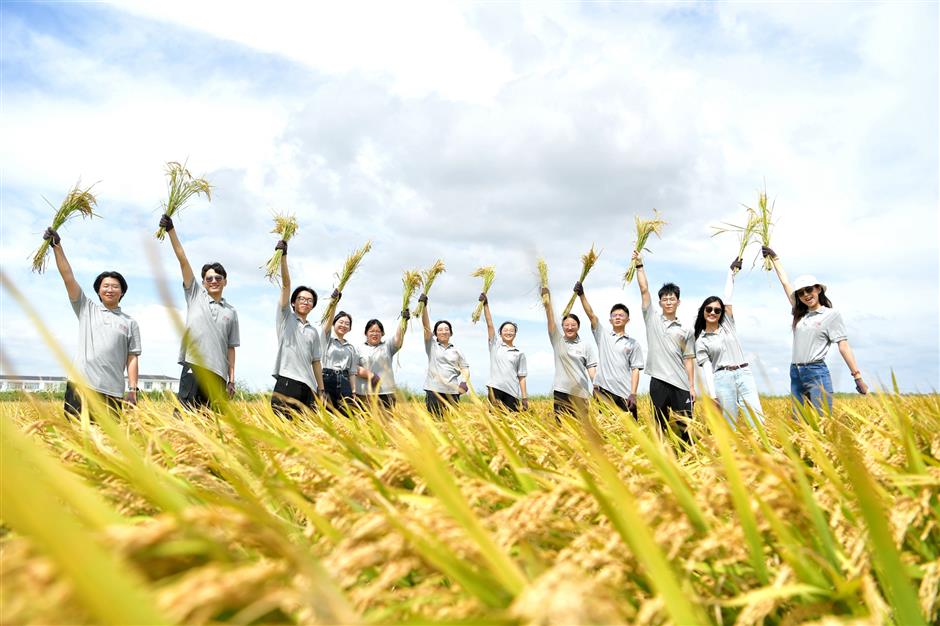 The students make a pretty picture with their rice harvest.

The east shoal of Hengsha Island covers a total area of 160,000 mu (26,358 acres) and is an important land reserve resource for both eco-island construction and agricultural development of Chongming. However, the soil there, mainly from the mud in estuaries, is sandy and low in organic matter and nutrients. It's also salinized to some degree. Therefore, solutions were urgently needed to rapidly improve the soil.

Since 2019, the ecological restoration innovation team led by Deng has been working to improve soil fertility here. They also managed to reduce the occurrence of plant diseases and pests which has slashed the use of pesticides.

In 2020, the research team successfully improved soil fertility of 35 mu of new land on Hengsha Island. The average yield of rice per mu exceeded 400 kilograms, 16 to 128 percent higher than that of the normal control field.

The rice produced is pollution-free, therefore known as "Happiness."

The rice was also found to be superior in look and taste, compared with the rice of the same variety produced from other farmland.

This year, the team planted 40 mu of early-season rice and 60 mu of late-season rice on the improved land. The researchers will track and evaluate the effects of soil improvement over the past two years, particularly in the aspects of restoration of soil microbiota and ecosystem.

They will also demonstrate the use of microbial agents, biochar-based microbial fertilizers and the methods of restoration of key farmland species they have developed in the land. 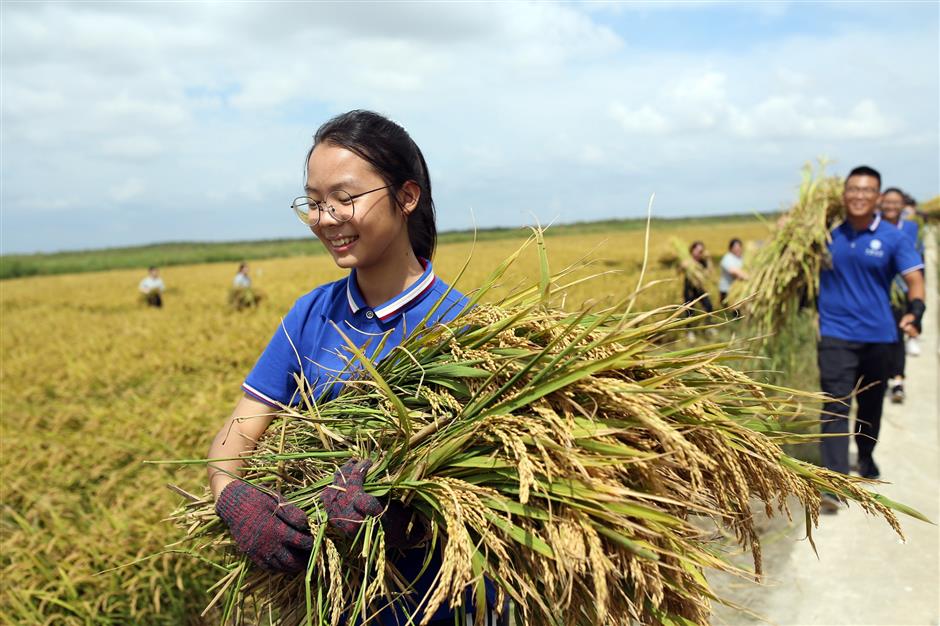 A student looks happy as she carries the rice crop.

According to Deng, the team members used crop straw to produce biochar with pyrolysis technology. By optimized pyrolysis temperature and amount of biochar, they developed a biochar-based microbial fertilizer, which turned out effective in promoting crop growth. Currently, they have submitted an application for an invention patent for this fertilizer. 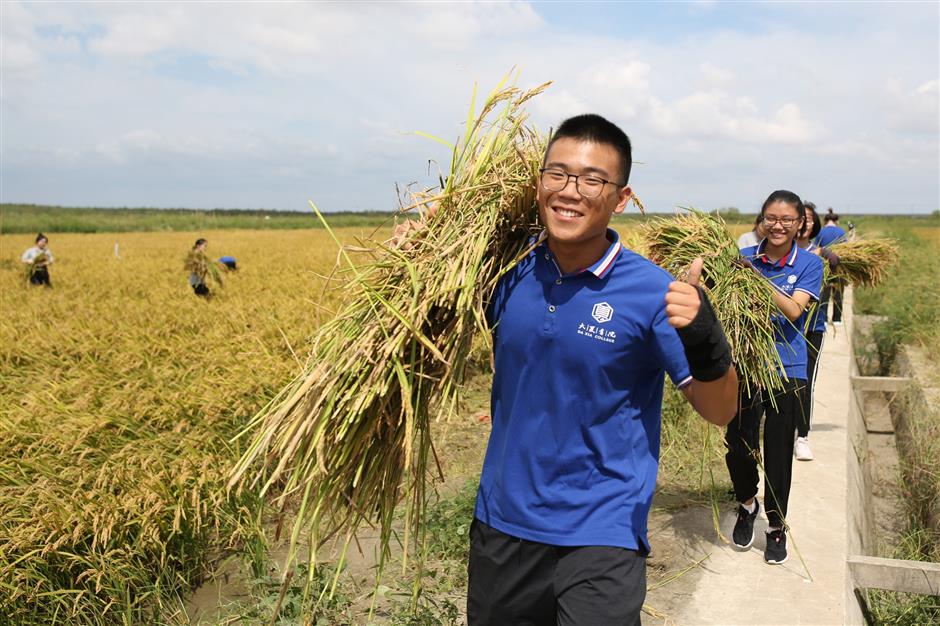 This year, students were engaged in the whole process of rice growing, from seeding to harvest.

"We have been familiar with city life but seldom go into the fields to experience nature and the joy of labor," said Zhao Yue, one of the students participating in the celebration. "This activity enabled us to better understand the hard work of researchers behind this ecological base."

"Our teacher led us to observe the paddy field canals and asked us to think about and discuss the canal patterns and functions. In the process, we also learned about the ecological corridor and thought about its advantages and disadvantages," said Song Mengqi, another student.

"As an ecology major, I should not be satisfied with being an armchair strategist, but should take the field as my main work place for scientific research."

On Hengsha Island, rice paddy paintings and colorful flowers in the Island Art Garden scenic area have been attracting tourists from across China. This year, East China Normal University also "painted" a little lion with various rice varieties to celebrate its 70th anniversary. 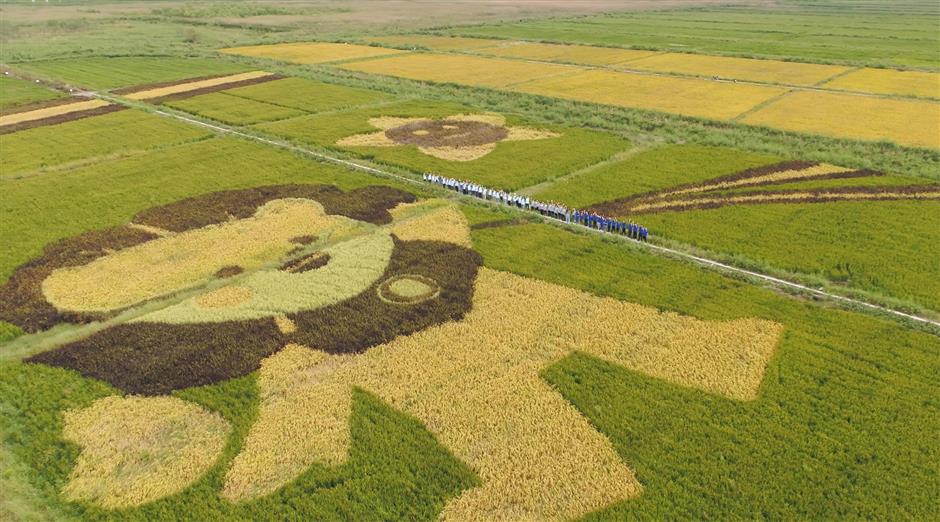