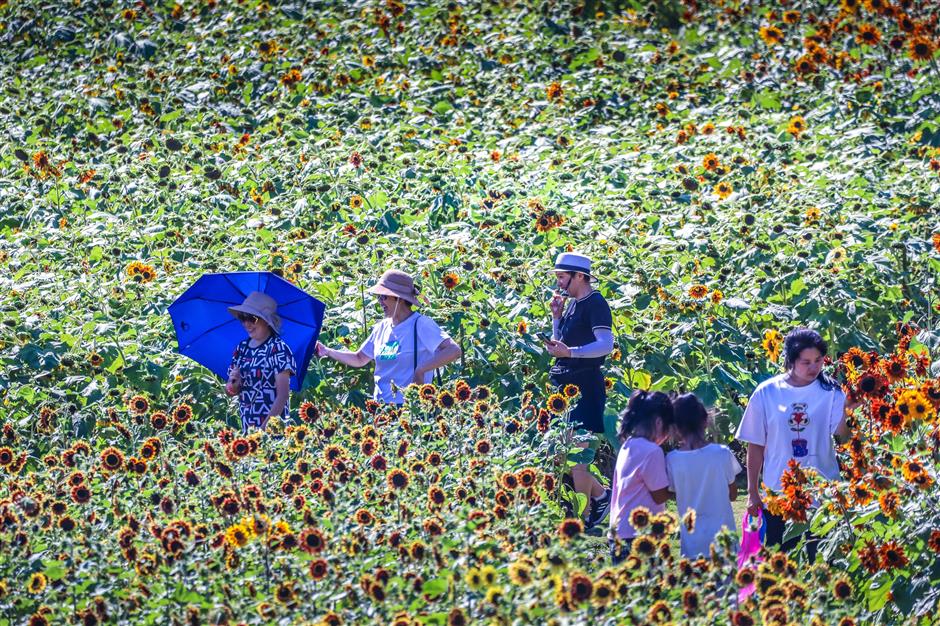 Visitors enjoy a sea of flowers at Chenshan Botanical Garden during the seven-day National Day holiday. 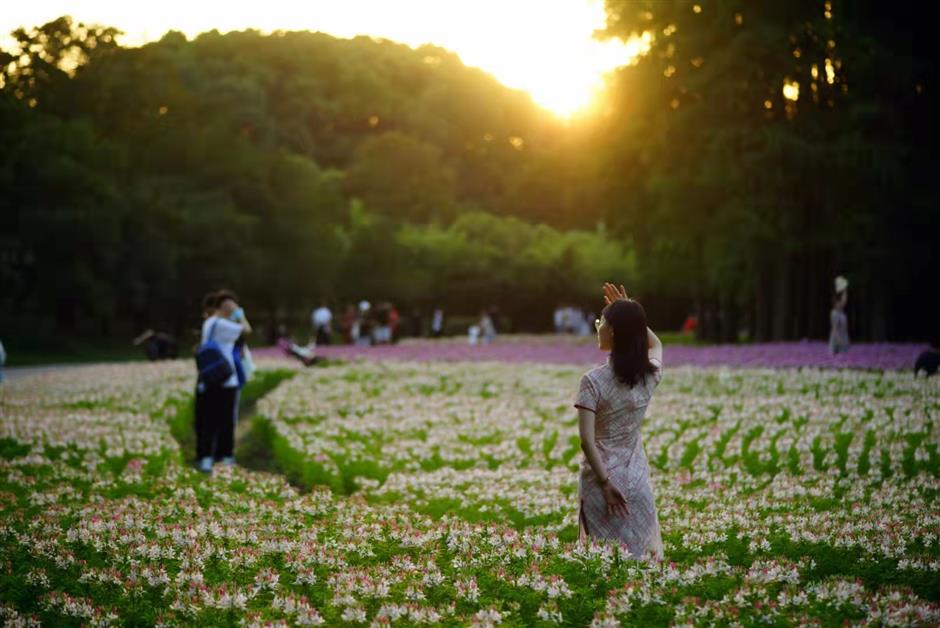 The popular Gongqing Forest Park makes for a nice photo.

Shanghai recorded more than 17 million visits by tourists during the seven-day National Day holiday, with major scenic spots witnessing a 17 percent increase in visits from the same period last year thanks to the pleasant weather and upgraded cultural and tourism experiences as part of the Shanghai Tourism Festival.

In total, the city recorded 17.95 million visits from tourists during the holiday and the average occupancy rate at local hotels reached 59 percent, down 4 percentage points from the same period last year, according to the Shanghai Administration of Culture and Tourism.

However, 170 major tourist attractions recorded 8.97 million visits, up 17 percent, and the city reaped in 25.86 billion yuan (US$4.01 billion) in cultural and tourism revenue over the seven days.

Parks across the city welcomed 5.5 million visits, among which countryside parks had 515,600 visits, growing 36 percent from the same period last year. 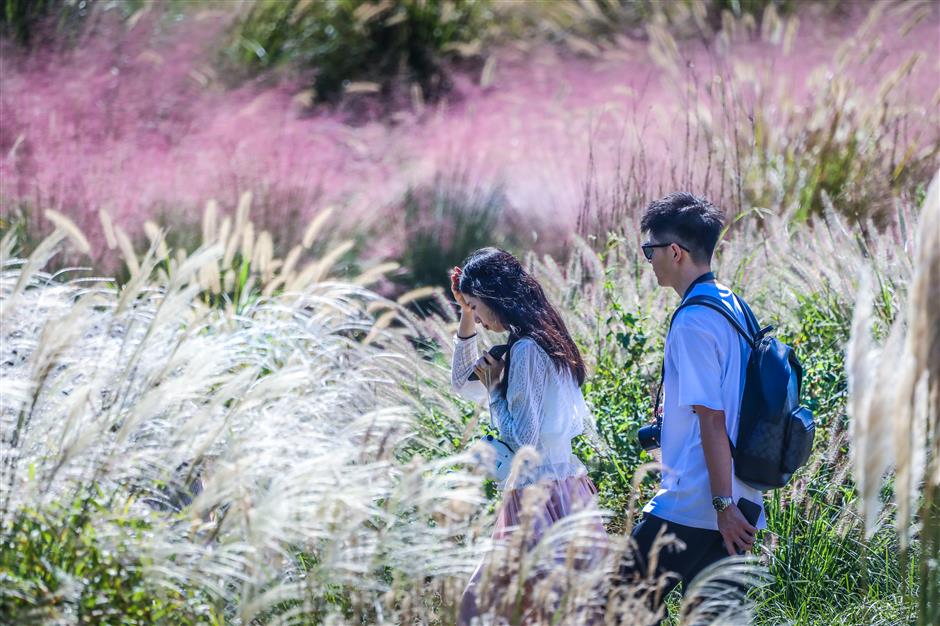 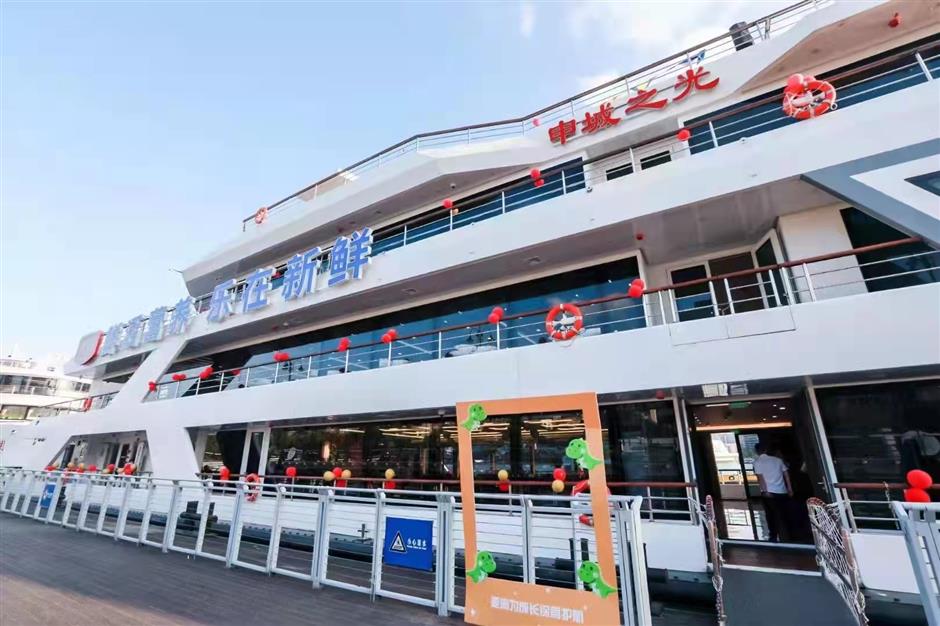 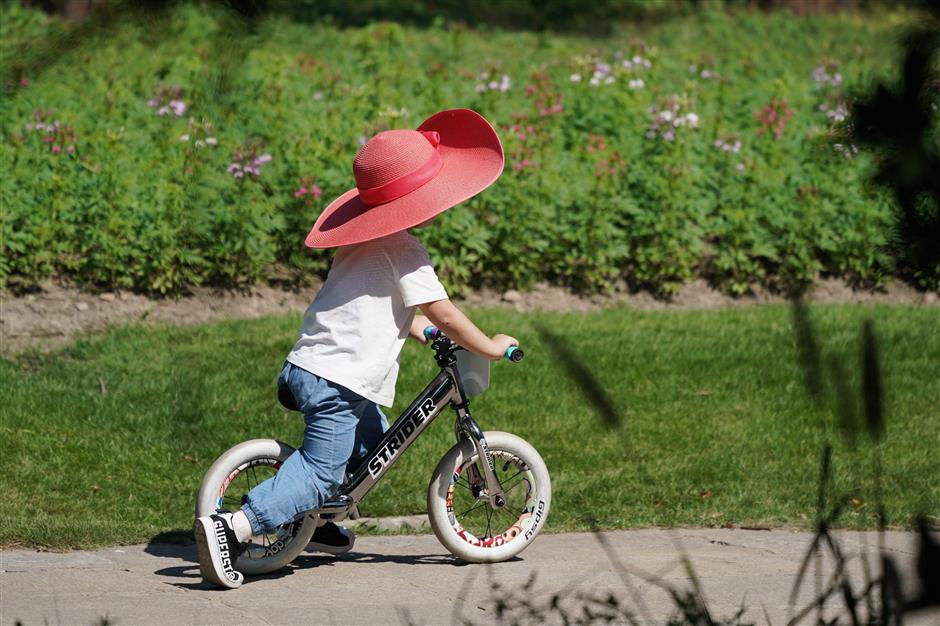 A child enjoys cycling during a visit to Gongqing Forest Park.

Chenshan Botanical Garden had more than 113,000 visits, and Gongqing Forest Park received nearly 300,000 visits during the holiday, surging 116 percent from the same period in 2019 and posting a record high.

Shanghai Zoo had more than 160,000 visits over the seven days.

In total, 177 activities were staged across the city during the holiday, providing diversified travel options to residents and tourists, the administration said.

"Red" tourism gained popularity during the period, with revolutionary venues such as the memorial of the First National Congress of the Communist Party of China, the Longhua Martyrs Memorial, and memorials of renowned author Lu Xun and Chen Yun, an early leader in the CPC, among popular destinations. Exhibitions celebrating the 100th anniversary of the founding of the CPC were also favored, the administration said.

"Instead of organized tours by working units, families with children were major visitors to 'red' tourism venues in the city during the holiday," said Zhou Weihong, deputy general manager of Shanghai Spring Tour. 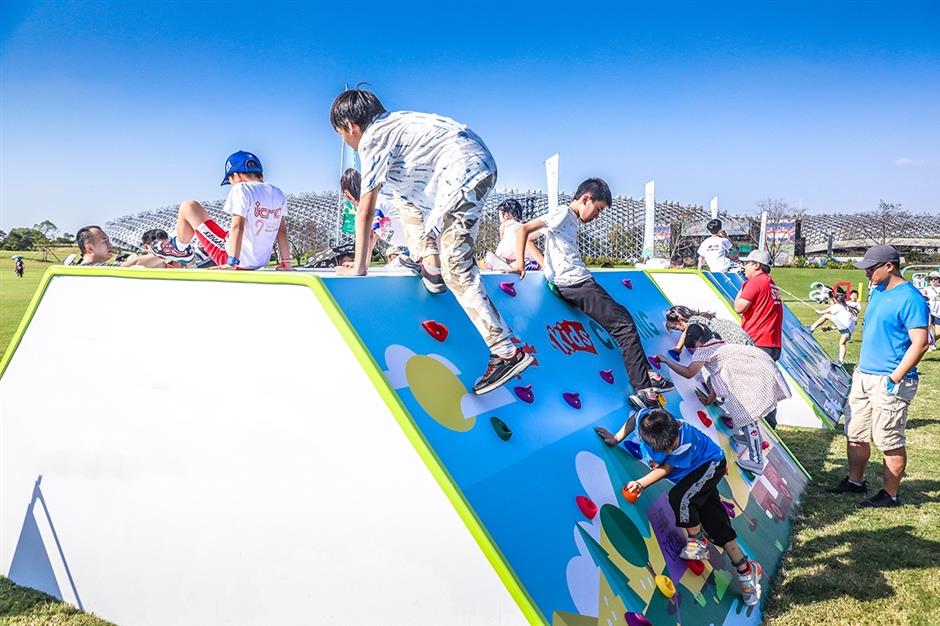 Children have a gala time at Chenshan Botanical Garden. 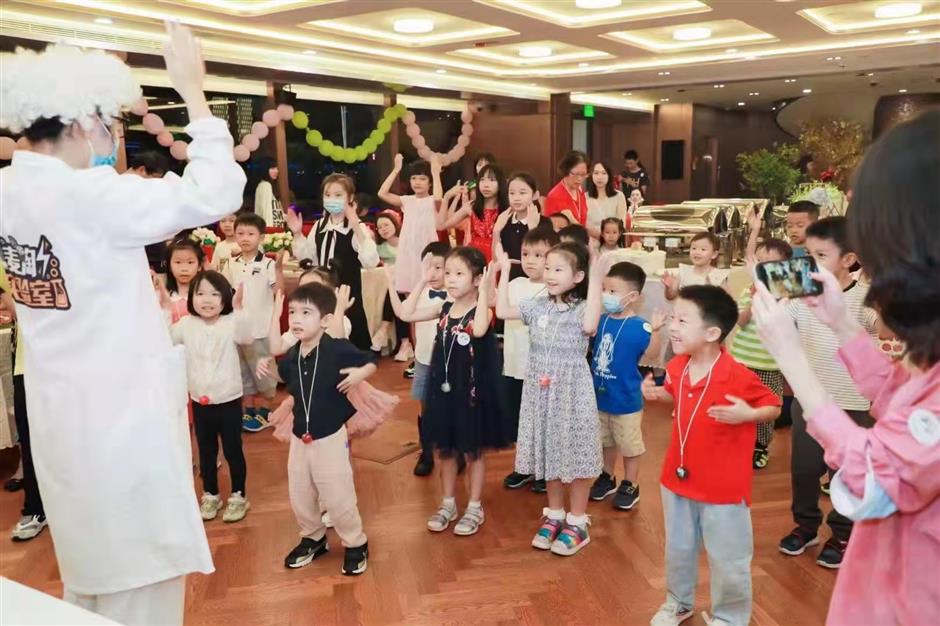 A fun experience on a Huangpu River cruise ship.

The route includes five stops – the sites of the first, second and fourth national congresses of the CPC, the May 30th Movement Monument and Nanjing Road E. The 20-kilometer trip takes 90 minutes.

Geng Yan, a local tour guide, welcomed a group of young guests at the May 30th Movement Monument during the holiday – the group of kindergarten children with accompanied by their parents, many of whom were CPC members.

"To my surprise, all kids were quiet through the whole trip despite the hot weather, listening carefully to my introduction of the CPC history on the bus," said Geng.

"I hope the trip will leave a memory on their mind and they will make contributions to the city when they grow up," she said. 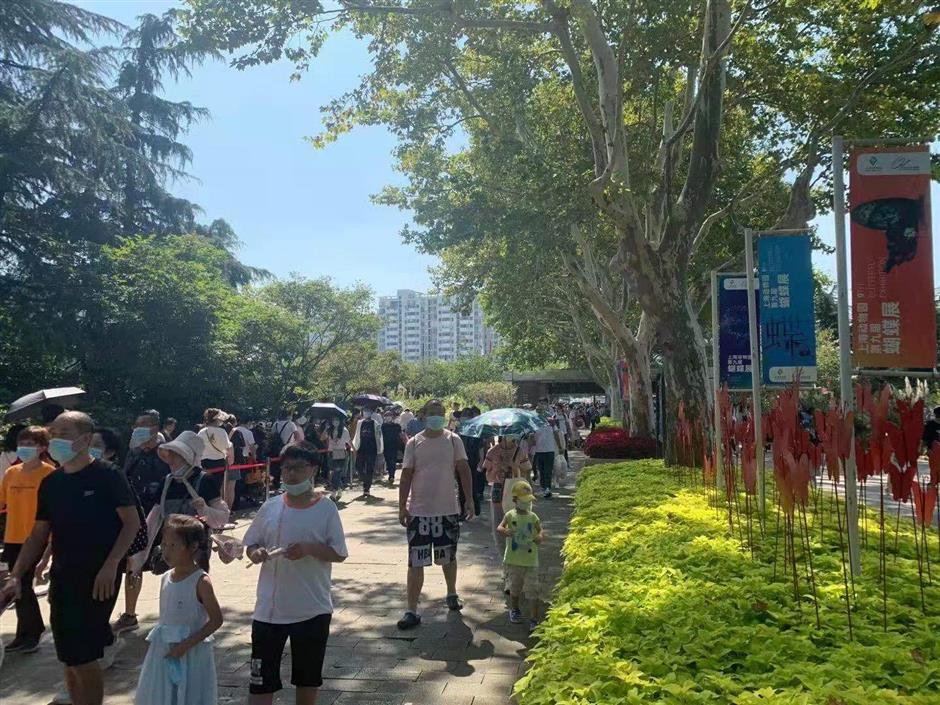 Shanghai Zoo is swamped with visitors during the holiday. 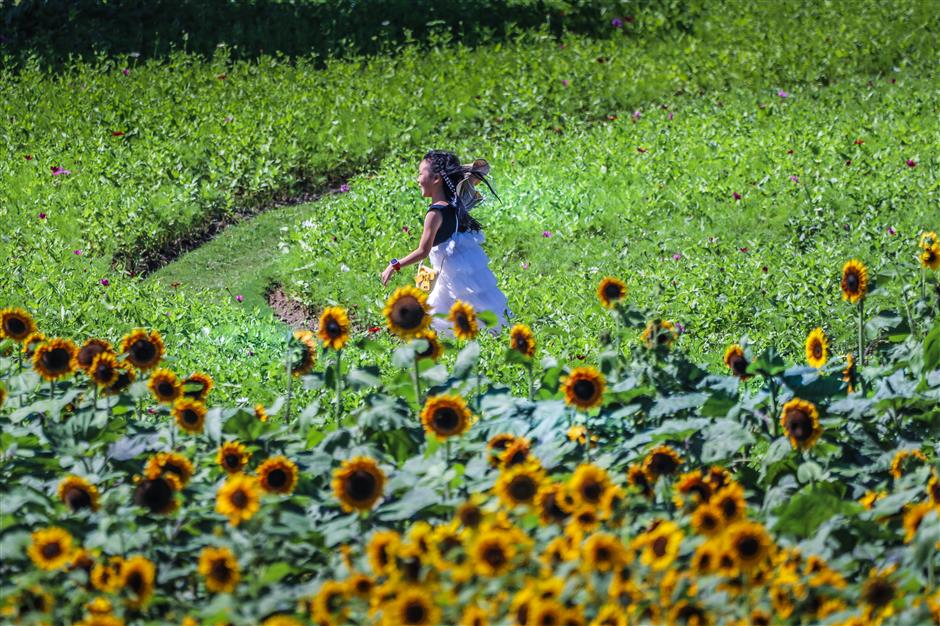 A tour of nature at Chenshan Botanical Garden. 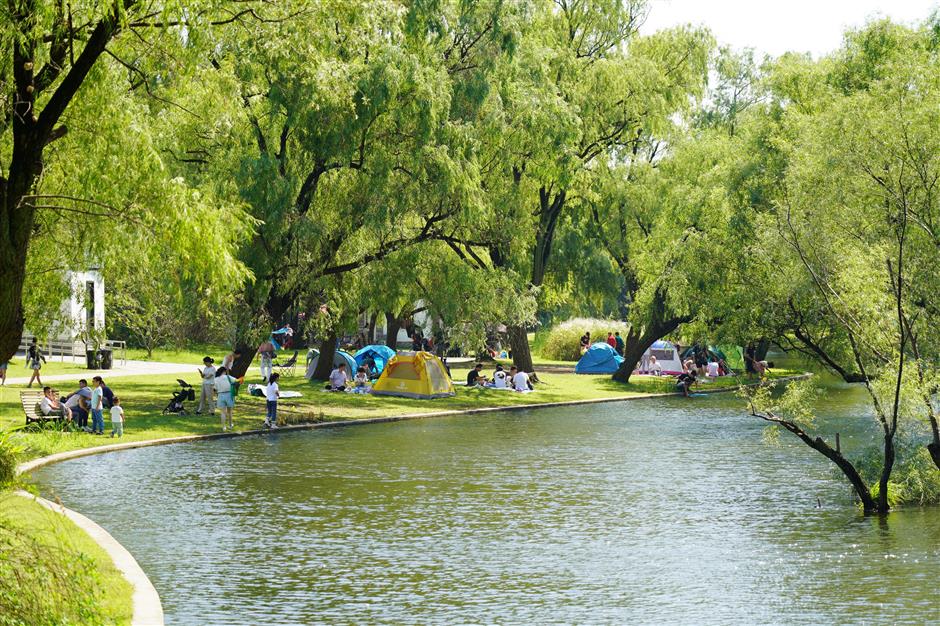 People camp out at Gongqing Forest Park during the holiday. 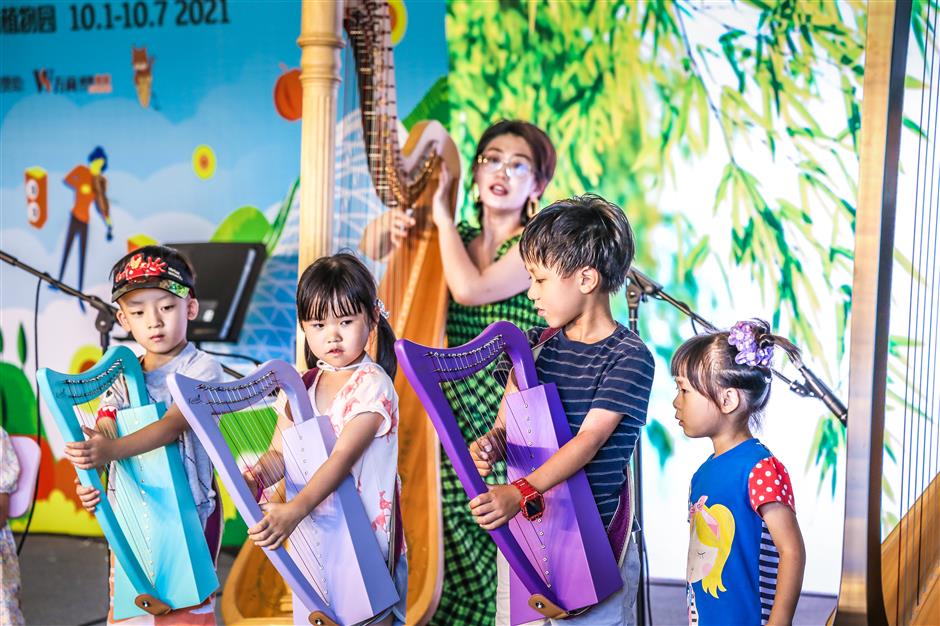 Rural tourism was a new hotspot during the holiday, the administration revealed.

Minsu (Chinese version of B&B) in the city's rural areas were extremely popular.

In Chongming District, the occupancy rate of medium- and high-level hotels and minsu hit over 98 percent during the seven-day period.

Meanwhile, short walking tours came into vogue as readable architecture and walking tours were the themes of this year's Shanghai Tourism Festival for the first time. The festival wrapped up on Wednesday.

It carried 11,000 passengers in total during the tourism festival starting on September 17.

For families with children, amusement parks were popular destinations.

In total, the city's tourism regulators received 99 complaints during the holiday, among which 43 were related to culture and the rest were about tourism. The total figure was down 78 percent from the same period in 2019.