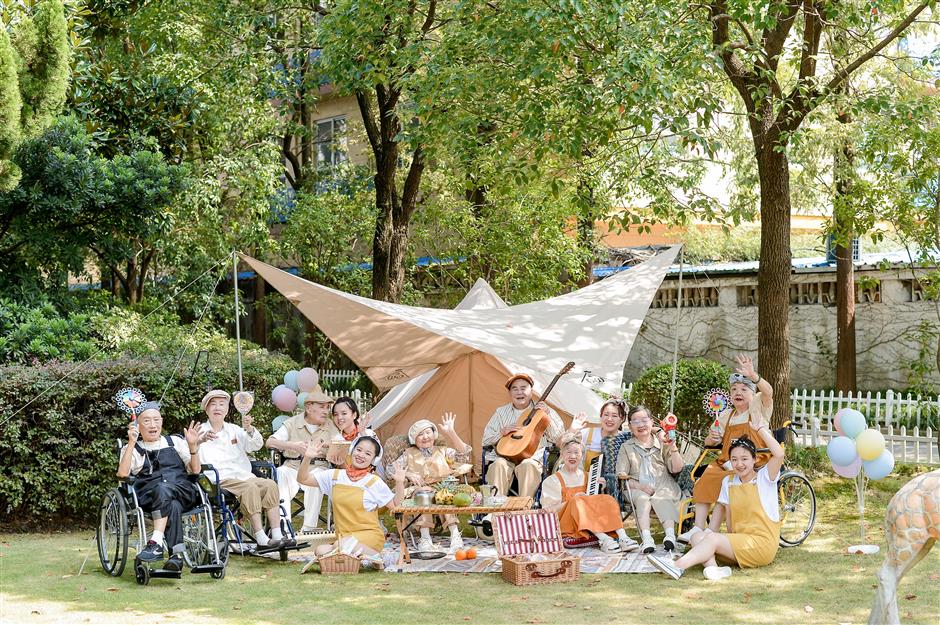 Seniors in the music video

If your movement was restricted to a wheelchair, would you give up hope in life and stop enjoying your time? The answer is an absolute "no" for elderly residents at the Yangpu District Social Welfare Home.

Wheelchair-bound and white-haired, a group of seniors with an average age of 91 enjoyed the fun of dancing and expressed their love for life in a unique way like young people.

A music video titled "Dancers in Wheelchairs" was released on the social welfare home's WeChat and Douyin (known as TikTok overseas) accounts on Tuesday in celebration of the Double Ninth Festival, occurring on the ninth day of the ninth lunar month, which is a day when respects are paid to senior citizens.

It falls on Thursday this year.

In the video, they camped out, played with dogs, and enjoyed music and danced, even if they rely on wheelchairs for movement.

"There has been an increasing number of seniors with physical disabilities, but they don't receive enough care from society," said Huang Rongyan, deputy director of the welfare home.

"It seems that people all believe that seniors are no longer energetic and that their life is gloomy when wheelchair-bound. We want to break the stereotype of these seniors."

"We found that these grandpas and grandmas like music and dance, and music is a good therapy for them, thus the idea of a dance music video for them originated," said Huang.

The makeup and filming were done by professionals.

Because of COVID-19, the elderly residents have not left the social welfare home for a long time, therefore a camping venue was created for them by the home's employees.

The performance of seniors surprised the staff.

"The rehearsal process was very soothing and they were happy the whole time," she added.

"Although they forgot their dance moves frequently and needed to practice, again and again, no one gave up," said Luo Xin, another nursing staffer.

"They cherished the chance to be on the camera and are proud of themselves," Luo added.

Some seniors were too excited to sleep when they learned they would even wear makeup, just like children expecting a spring outing.

"I felt like that I am 20 years younger after putting on makeup," said grandpa Zhuang, 92.

Some asked for more photos as it was the first time that they played guitar.

"I never thought of filming a music video at such an age," said grandma Chen, 94.

"I felt that my body and soul were both young while dancing," she said.

"We believe art has the power of healing for seniors with cognitive disorders and physical disabilities," said Huang.

"The music video is just a start, and we will try more art-related activities to make our elderly residents happy," she said.

Netizens said that "it seems that getting old is no longer a fearful thing when seeing these seniors, and the music video is very healing" in the video's comment section.