Volunteers present "longevity noodles" to a senior visitor at the Jade Buddha Temple on Tuesday.

Shanghai's Jade Buddha Temple will present over 100,000 "longevity noodles" to local seniors for the upcoming Double Ninth Festival on Thursday, a day dedicated to the elderly.

The dried noodles, customized by the temple dating back to the late Qing Dynasty (1644-1911), are being delivered to local seniors' homes as well as to those living alone, physically challenged, retired soldiers, model workers and centenarians, beginning on Tuesday.

Eating longevity noodles on one's birthday or on the Double Ninth Festival is a tradition of the Han majority dating back to the Han Dynasty (206 BC-AD 220). The noodles are long and continuous to represent longevity.

The temple's Juequn Culture and Education Foundation initiated the campaign to present noodles to the elderly during difficult conditions in December 2020. The noodles are being sent to local communities, subdistricts, rescue stations and seniors' homes regularly.

The temple also announced an offer of free admission to all seniors over 65 years old on the festival, which falls on Thursday this year.

Each senior visitor can also have a meal of free veggie noodles and Chongyang sticky cake, another traditional food of the festival. Doctors will provide free medical consultations for the elderly at the temple. 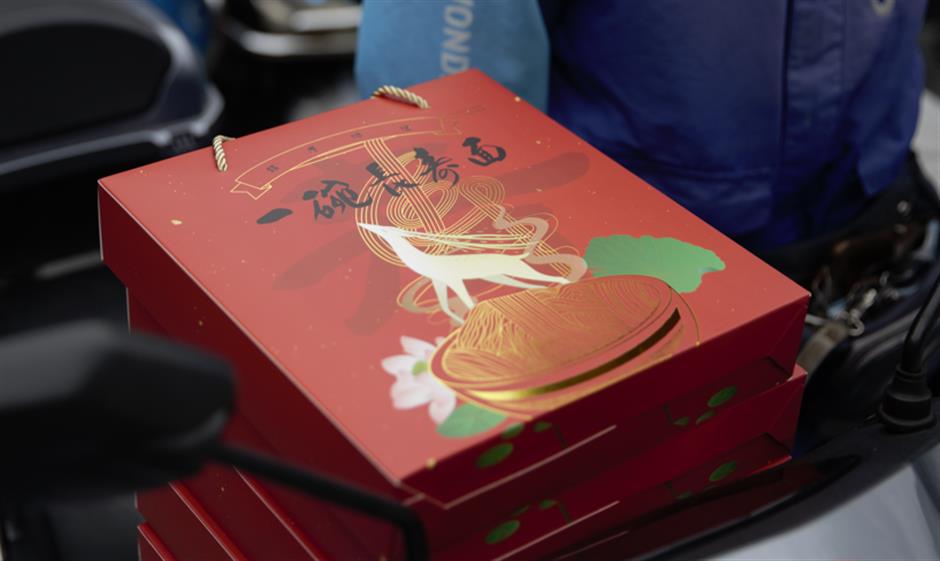 The dried "longevity noodles" made by the Jade Buddha Temple.