The Shanghai Proton and Heavy Ion Center announced the success of Asia's first proton treatment for macular degeneration, a leading cause of vision loss among elderly people.

A 79-year-old woman received the non-invasive and precise proton treatment, said the center, which uses cutting-edge proton and heavy ion beams to target and kill cancerous tissue and treat diseases without harming healthy tissue and cells.

It is the first facility of its kind in China and only the third in the world.

The woman, surnamed Zhang, recently began to suffer from vision loss in her left eye and was diagnosed with macular degeneration.

Medical treatment was ineffective. After learning that proton radiation is an advanced technology to combat the disease and can protect the fundus structure and healthy tissues at the same time, the patient visited the Shanghai Proton and Heavy Ion Center.

After a careful check and evaluation, doctors helped the patient complete the treatment – only one proton radiation with 1 minute.

According to doctors, the center began to cooperate with Fudan Hospital's Eye, Ear, Nose and Throat Hospital regarding proton treatment for macular degeneration in 2017. All patients have reported positive results through clinical trials without serious adverse reactions.

"After previous clinical studies, we have concluded that proton treatment is an effective and safe therapy for patients with macular degeneration, especially for those with poor responses to ordinary medical treatment," said Dr Kong Lin, a doctor at the center. 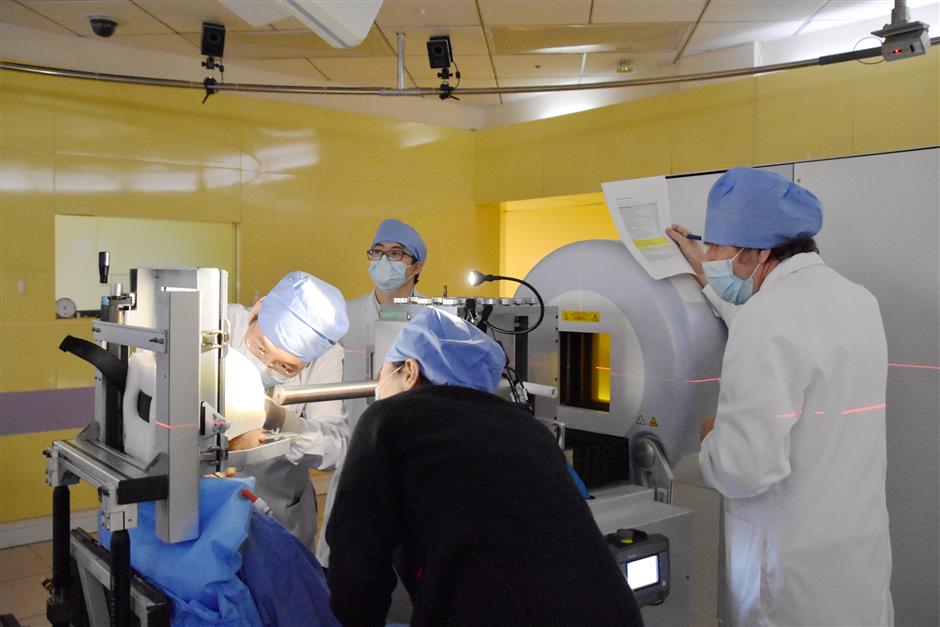 Doctors from the Shanghai Proton and Heavy Ion Center prepare radiation treatment for a 79-year-old woman with macular degeneration.