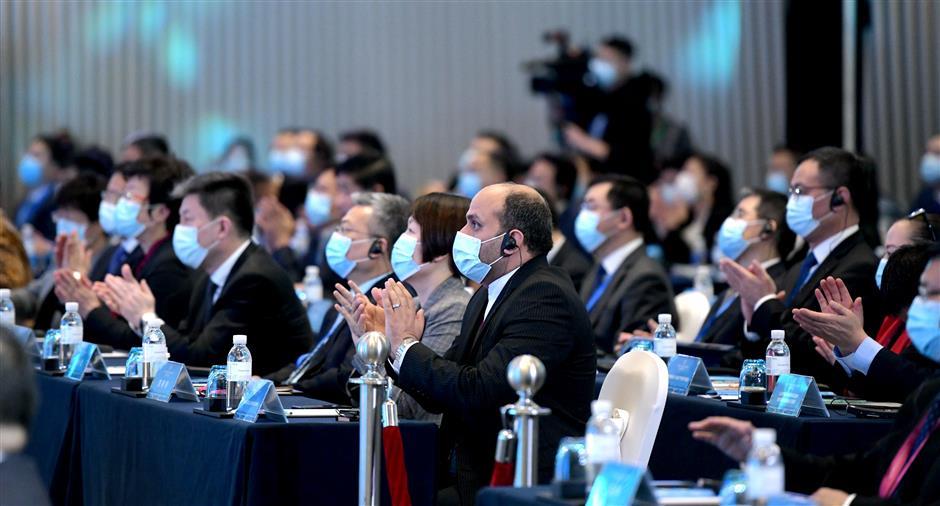 Officials and experts from both home and abroad at the Shanghai Tower for the World Cities Day 2020.

The 2021 World Cities Day, a legacy of the 2010 World Expo Shanghai, will be held in Shanghai next week to focus on global climate change.

The United Nations designated October 31 as World Cities Day in 2013, which was initiated in the declaration of the city government on October 31, 2010, the closing day of the Shanghai World Expo. The general theme of World Cities Day is Better City, Better Life, the theme of the expo.

The theme of the 2021 event will be "Adapting cities for climate resilience." It will be held between October 30 and November 1 with forums and public activities such as orienteering, plogging and art exhibitions.

The First Sustainable Development Goal Cities Global Conference will be launched on the day this year.

The theme reflects the fact that climate change will have a huge impact on city residents, with hundreds of millions of people experiencing floods, rising sea levels, storms and increasing periods of extreme temperatures, according to UN-Habitat, the UN agency for human settlements.

"There are more than 1 billion people living in informal settlements with 70 percent of them highly vulnerable to climate change," said UN-Habitat Executive Director Maimunah Mohamed Sharif. "We urgently need investment in climate resilience and innovative solutions."

The urban sustainable development and governance experiences of Shanghai and other Chinese cities will be showcased on the day, said Hu Zijian, an official with the Ministry of Housing and Urban-Rural Development.

The 2021 "Shanghai Manual" – a guide for sustainable urban development in the 21st century – will be released at the event in Shanghai along with the Shanghai Award and Shanghai Index on urban sustainable development.

During a visit to Shanghai last November, President Xi Jinping said: "Cities are built by the people and for the people." He said urban planning and development must be committed to a people-centered approach and focus on people's needs.

Experiences in solving the various urban problems of Shanghai and other global cities will be shared at a series of forums on historical cultural protection, urban governance, ecological resilience and new city construction during the event.

Global city representatives and experts will make speeches at the event online due to the COVID-19 pandemic.

Since the first World Cities Day was launched in Shanghai in 2014 to highlight the theme of the World Expo 2010 – Better City, Better Life – the annual event has been held in Italy's Milan, Ecuador's Quito, China's Guangzhou, Liverpool in the United Kingdom and Yekaterinburg in Russia. Events were also held in the Chinese cities of Xiamen, Xuzhou and Tangshan.