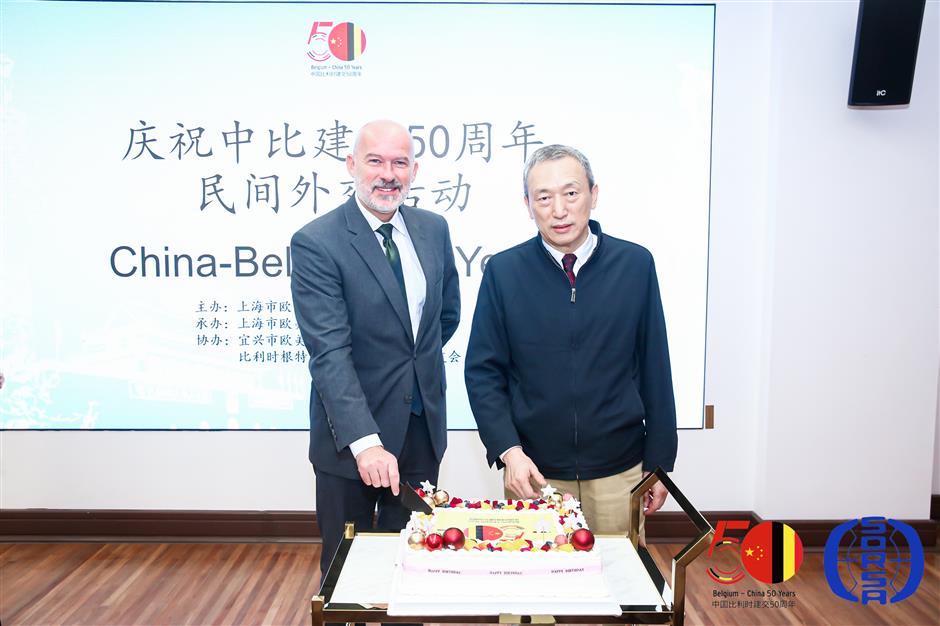 Bruno Jans, consul general of Belgium in Shanghai, and Pei Gang, president of the Shanghai Overseas Returned Scholars Association, cut a cake to celebrate the 50th anniversary of the establishment of China-Belgium diplomatic ties.

Fifty years ago, on October 25, the lawful seat of the People's Republic of China was restored in the United Nations (UN), marking a milestone event in the history of the international organization.

Belgium was among the nations that voted yes to China. It also established diplomatic relationships with China on that day, and the two countries have developed a deep friendship since.

The exhibits include a photo of 22-year-old Nie Rongzhen, one of the Chinese students who studied at Charlerio University of Work in Belgium in 1921, seeking new solutions for the development of China.

Nie became one of the founders and marshal of the People's Republic of China 28 years later.

Versions of "The Blue Lotus" are on display.

Another part of the exhibitions features various language versions of "The Blue Lotus," a volume of Belgian cartoonist Hergé's most famous comic book series entitled "The Adventures of Tintin."

The particular volume created by Hergé with help from Chinese painter Zhang Chongren was about Tintin's adventure in Shanghai.

The exhibition will run through to the end of November.

Shadow puppets collected by Belgians who have studied in China are among the exhibits.