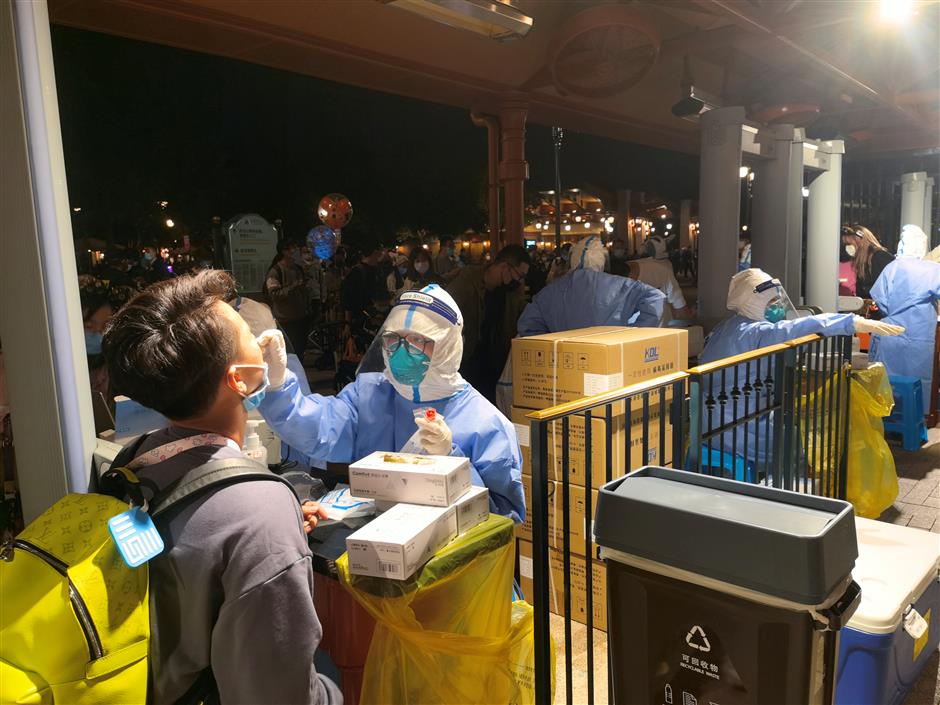 People seek COVID-19 tests at Pudong Hospital, a hospital near the Disney resort, on Sunday evening.

After a woman who visited Shanghai Disneyland last Saturday tested positive for COVID-19 on Sunday, the government required all visitors to the resort over the past weekend to be tested for the virus. This caused a surge of test demands at hospitals around the city on Sunday evening.

Some hospitals told Shanghai Daily on Monday that the surge was handled with increased capacity and concerted effort with other authorities such as the police, and measures will be sustained for the coming days as the Disneyland visitors will have to get four tests in total within 14 days.

At Tongren Hospital, more and more people came for nucleic acid tests starting from 8pm on Sunday, and the crowd was significantly reduced only after 1am.

"The number of requests from 8pm to midnight on Sunday almost equaled that for a whole day normally, and usually we have only 100 to 200 requests for that time period," said Dai Yun, director of the outpatient service office of the hospital who is in charge of the nucleic acid test point at the hospital. "Most of the requests were from people who had been to the Disney resort in the past two days."

Since there was a rise in test demands after the National Day holiday last month, as people returned to the city from outbound traveling, the hospital has some experience in dealing with similar situations, but the surge of demands within such a short period of time was still unprecedented, Dai said.

"We immediately added five more testing workers to the original six, with all staff of our administrative departments engaged to manage the demands," she said. "After our work pressure was relieved a little bit in the early morning, we sat down for a discussion of further steps to handle the situation."

There was a small surge of demands at the hospital on Monday morning, as some parents who took their kids to have tests the previous night returned home earlier without getting their tests because there were too many people in line and their kids were tired.

But more requests were expected for Monday evening. The government requires that Disney resort visitors be tested on the first, second, seventh, and 14th day after their visits.

"We will still be working in full capacity on Monday evening, and we have increased the appointments on our website for people to make reservations before they come," Dai said. "This will help them save time waiting in line."

Traffic police in Changning District, where the hospital is located, helped handle the traffic around the hospital on Sunday evening, and a street near the hospital was partially closed after midnight to keep queuing people safe.

In Pudong, where the Disney resort is located, the Pudong New Area People's Hospital, which is a larger hospital near the resort, said it handled about 8,000 sampling requests from Sunday evening to Monday noon.

Pudong Hospital, another larger hospital near the resort, said it tested about 5,400 people from 5pm on Sunday to 8am on Monday, almost 20 times the average number of tests normally.

Twelve more laboratory workers were assigned to assist the employees to ensure that the test results were provided in due time, the hospital said.

In the entire Pudong New Area, the nucleic acid test services at larger hospitals were extended till midnight on Sunday, and the surge of test demands in the new area resumed on Monday morning, as the number of demands handled by certain hospitals by noontime more than doubled the number for a whole day normally, according to the health authorities of the new area.

In Jiading District, a suburban district in northwest Shanghai, some hospitals were also met with a larger number of sampling requests on Sunday evening, but there was no overloading, and the demands returned to normal on Monday morning, the district health authorities said.

In this district, two hospitals are now offering 24-hour sampling services, and three larger subdistrict hospitals in Nanxiang, Anting and Jiangqiao towns will extend services from 5pm to 10pm on Monday.

Robbie Shi, who visited Disneytown in the resort area on Saturday for a gathering with friends, rushed to the Shanghai No. 8 People's Hospital for a nucleic acid test after he read the news online on Sunday evening.

He arrived at the hospital around 10:20pm and finished the sampling at 11:15pm.

"The hospital had deployed staff to guide people to register and pay the test fees on its WeChat account when waiting in line, then fetch test tubes and have nose swabs taken," he said. "It was very smooth and quick."

As is required, he will have another test 24 hours later.

"My company has told me to stay at home for two days and return to work with negative test results," he said. "We have established an online work system after the outbreak of the pandemic, so my work is going on well even when I'm working from home."

The government requires that Disney resort visitors over the past weekend stay at home for two days. If their first two tests turn out to be negative, they can normally go to work or to school under the condition of self-monitoring of their health status and two more tests within the next 12 days.

By 8am on Monday, testing results of 33,863 relevant personnel who had been to Shanghai Disneyland and Disneytown on October 30 and 31 all came back negative. Results of 920 object and environment samples were also negative. All involved sites have been fully disinfected.