Research team breaks into secrets of legumes as fertilizer alternative 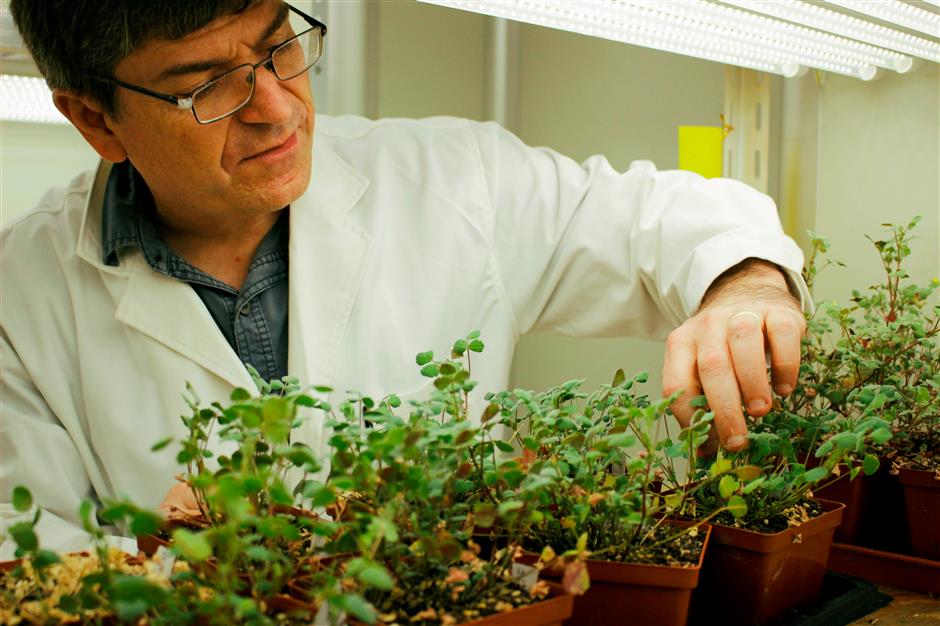 Secrets behind the distinctive "nitrogen-fixing factories" of legumes have been uncovered in an international research study in Shanghai, providing new approaches to sustainable plant growth.

The findings of the research, led by Canadian Jeremy Dale Murray, and their significance have been published in the academic journal Science.

To do this, legumes form a symbiotic relationship with nitrogen-fixing bacteria, forming an efficient "nitrogen-fixing factory" consisting of nodules, usually appearing as large, red-colored bumps on the roots.

The bacteria that colonize the nodules contain nitrogenase that can fix nitrogen from the air and turn it into ammonia for plants to absorb. In return, legumes feed the bacteria inside nodules with carbohydrates. But biological nitrogen-fixation must deal with the "oxygen-paradox."

"This is problematic because there is an abundance of oxygen on our planet; over 20 percent of our atmosphere is composed of oxygen," said Murray.

The legumes answer to this problem is leghemoglobins, small proteins which are similar to hemoglobin in human blood and make up about 40 percent of the protein in nodules and color nodules red.

When the oxygen concentration is too high, leghemoglobins can combine with oxygen and reduce its levels to protect nitrogenase and then slowly release the oxygen to the bacteria for their respiration.

However, until this study, no one knew how legumes control production of leghemoglobins.

Four years ago, Murray came to Shanghai, and established his lab at the CAS Center of Excellence in Molecular Plant Sciences (CEMPS). The result has been published in the top academic journal Science.

The production and energy costs of nitrogen fertilizers are increasing and are detrimental to the environment. Biological nitrogen fixation, however, provides a solution.

"Legumes improve agriculture for a better society. They are used differently in agriculture compared to other crops because they can produce their own fertilizer through biological nitrogen fixation," Murray said.

"Our research will help us understand the process of nitrogen-fixation better," he added.

"If we understand it well enough, we might be able to transfer the ability to fix nitrogen to other crops – such as wheat, rice, and maize – for more sustainable plant growth and development, without the need for industrial fertilizers."

He credited his research team for the success of his findings.

"We chose China – particularly Shanghai – to do our research because of the advanced resources and strong research team that CEMPS is known to have," he said.