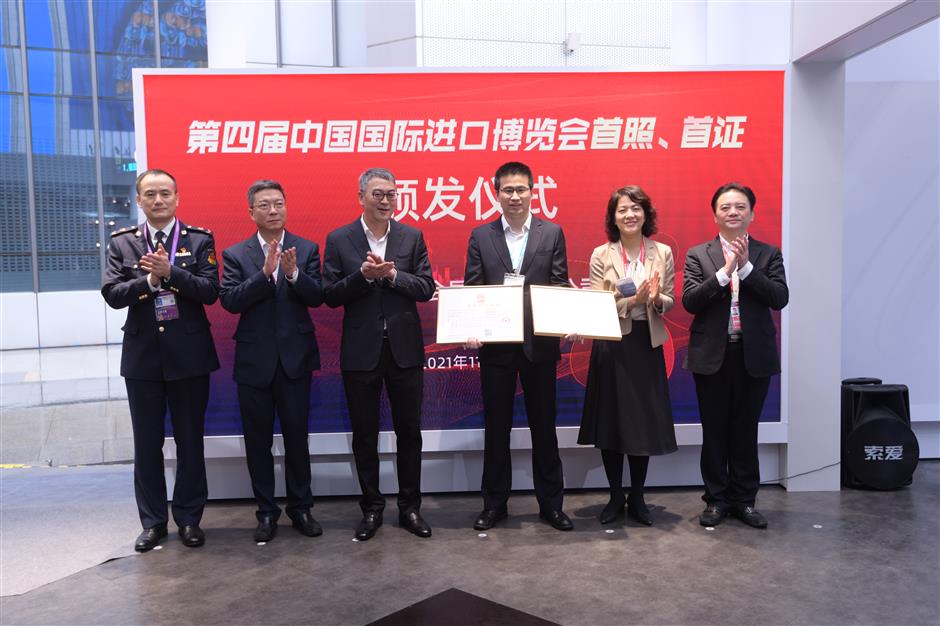 The first business license and food operation license issued to an exhibitor at the 4th China International Import Expo went to a German fabric fair company on Friday morning, the review and approval process taking less than two hours.

The company, Performance Days, will establish Tengshi Exhibition, a convention and exhibition service company, at West Hongqiao Business District in Qingpu District after obtaining the licenses.

General manager Tian En'gang was excited when he received the two licenses after submitting the application online to Qingpu District Administration for Market Regulation.

"The licenses were just printed as I can smell the printing ink fragrance," he said with a smile.

"I made an online application, with relevant materials submitted early Friday morning. After slightly over an hour, I received them at the National Exhibition and Convention Center of Shanghai," said Tian.

"It was an astonishing speed and the business environment in Qingpu District is supreme," he added with a thumbs-up.

Behind the amazing speed is the hard work and reform of market regulators.

If enterprises commit to certain standards and submit relevant materials, authorities will issue licenses to them first and make inspections later.

The traditional procedure could take up to a month before a business license or a food operation license was issued, involving at least two visits and on-site inspections.

Zhang Mei, an official with Qingpu District Administration for Market Regulation, started work at the National Exhibition and Convention Center of Shanghai at 7am on Friday.

"We learnt early that the exhibitor wanted to set up a new company, and provided corresponding services to it," said Zhang.

A 365-day company registration area has been set up to provide one-stop services for applicants at the Greenland Global Community Trading Hub close to the National Exhibition and Convention Center.

"We want to provide more convenient assessments for exhibitors who want to have a new identity as investors," said Zhang.