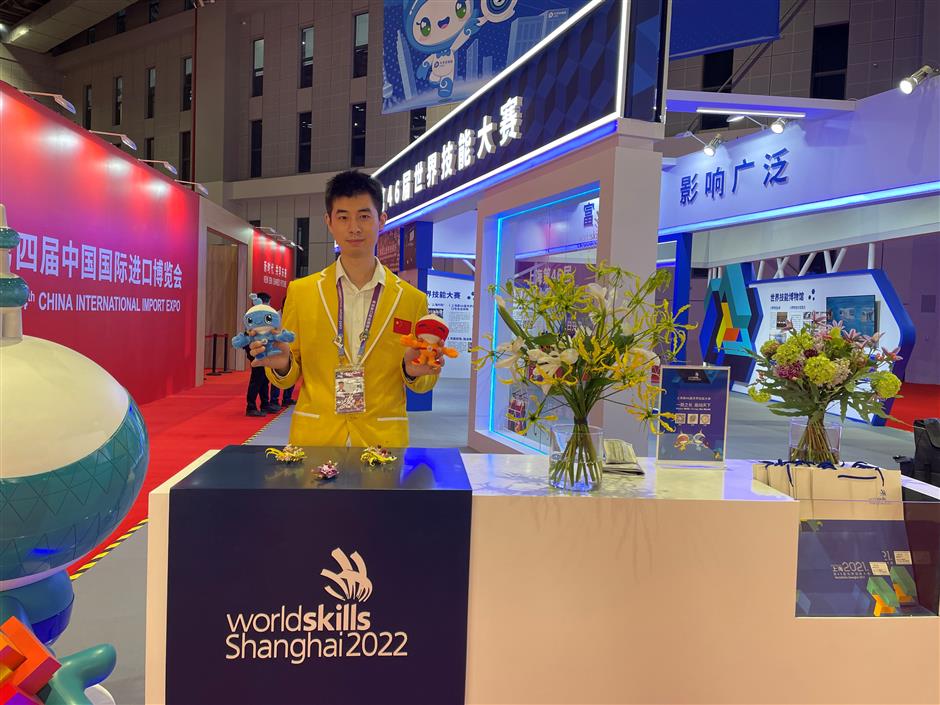 Pan Shenhan, gold medal winner for floristry at the 44th WorldSkills Competition in Abu Dhabi in 2017, stands at the Shanghai WorldSkills 2022 exhibition booth at the ongoing CIIE on Friday.

The 46th WorldSkills Competition set to take place in Shanghai is being introduced to visitors at the ongoing 4th China International Import Expo (CIIE).

About 3,000 exhibitors from 127 countries and regions are displaying their new products and technologies at the expo, seeking business opportunities in the Chinese market.

At the booth of Shanghai WorldSkills 2022 in the north exhibition hall of the National Conference and Convention Center where the expo is taking place, the slogan of the competition – "Master Skills, Change the World" – and Neng Neng and Qiao Qiao, mascots for the event designed based on the shape of Shanghai's landmark building the Oriental Pearl TV Tower with mortise and tenon joint locks in their hands, are all on display.

The booth is also inspired by the mortise and tenon joint, a traditional Chinese craft for making structures such as buildings and furniture.

With the theme "Skills Make A Better World," the exhibition area includes five sections to introduce the history of the WorldSkills Competition, and what to expect at the 46th edition that will take place on the Chinese mainland for the first time on October 12-17, 2022.

There is an introduction to WorldSkills International, an organization set up in 1950 to raise the profile of skills around the world. With over 80 members, it is dedicated to increasing skills awareness among young people, develop international skills standards, share research results, exchange best practices and promote the value of skills for economic growth and personal success.

The WorldSkills Competition, held every two years, is regarded as the largest and most influential vocational skills competition in the world.

More than 350 enterprises have offered to sponsor the 46th WorldSkills Competition in Shanghai, with combined sponsorship amounting to 450 million yuan (US$70 million).

Another area shows the WorldSkills Museum, a joint initiative of WorldSkills International, China's Ministry of Human Resources and Social Security and the Shanghai government, that is being developed on the bank of Huangpu River, known as the "mother river of Shanghai." It will officially open to the public during the WorldSkills Competition next year.

As the world's first museum to show vocational skills, it will become a global center for the exhibition of skills, a world platform for cooperation and exchange of skills development, an international skills education and training center and an official documentation center.

Yong'an Warehouse, which houses the museum, is a century-old historical structure in Yangpu District, a cradle of China's modern industry.

Development of vocational skills in Shanghai and the city's achievements in helping poor areas out of poverty are also shown at the booth.

Brooches made by Pan are on display.

On the first day of the exhibition, Pan Shenhan, gold medal winner for floristry at the 44th WorldSkills Competition in Abu Dhabi in 2017, appeared at the booth.

He presented brooches made with more than 10 kinds of flowers, such as butterfly orchids, lilies and hyacinths, and various weaving techniques to show the exquisiteness and charm of floristry. These included one brooch in the shape of a water drop for women and another rhombus-shaped for men.

Brooches are for formal occasions and the artworks convey a message from Shanghai to welcome guests and competitors to come to the city next year.

Pan said this is the first time he's taken part in the CIIE, and the designs in the expo have given him new inspirations.