Illegal 'cold fireworks' seized by police from bakeries and shops 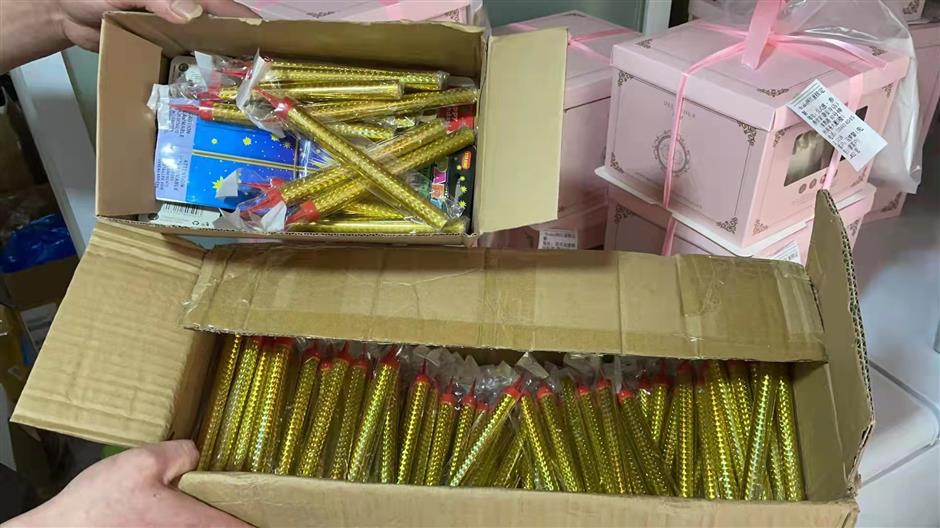 Some of the "cold fireworks" seized in a recent action by Shanghai police.

Shanghai police said on Thursday that they had recently seized over 6,000 "cold fireworks" from local shops.

"Cold fireworks" are a kind of entertainment pyrotechnic that are usually used indoors and often for ceremonies or performances.

They don't produce smoke, as many outdoor fireworks do, and are not as hot, but they still reach temperatures of up to 800 degrees Celsius.

Illegal manufacturing and transportation of such fireworks has been closely monitored nationwide since 2009 when several indoor fires causing casualties were reportedly traced back to them.

In Shanghai, this kind of fireworks, together with all other fireworks and firecrackers, is banned in the area within the Outer Ring Road.

In Putuo District, police said the fireworks were mostly sold in bakeries and stationery shops. In bakeries, they were sold with cakes and used in celebrations.

While most businesses surrendered the cold fireworks in their inventory to the police, some others tried to escape scrutiny by hiding items in their cars parked outside the shop, police said.

District police seized about 3,000 cold fireworks from 11 shops and handed out administrative punishments.

Some supermarkets were also found to be illegally selling the fireworks, while police also patrolled Internet commerce platforms for clues.