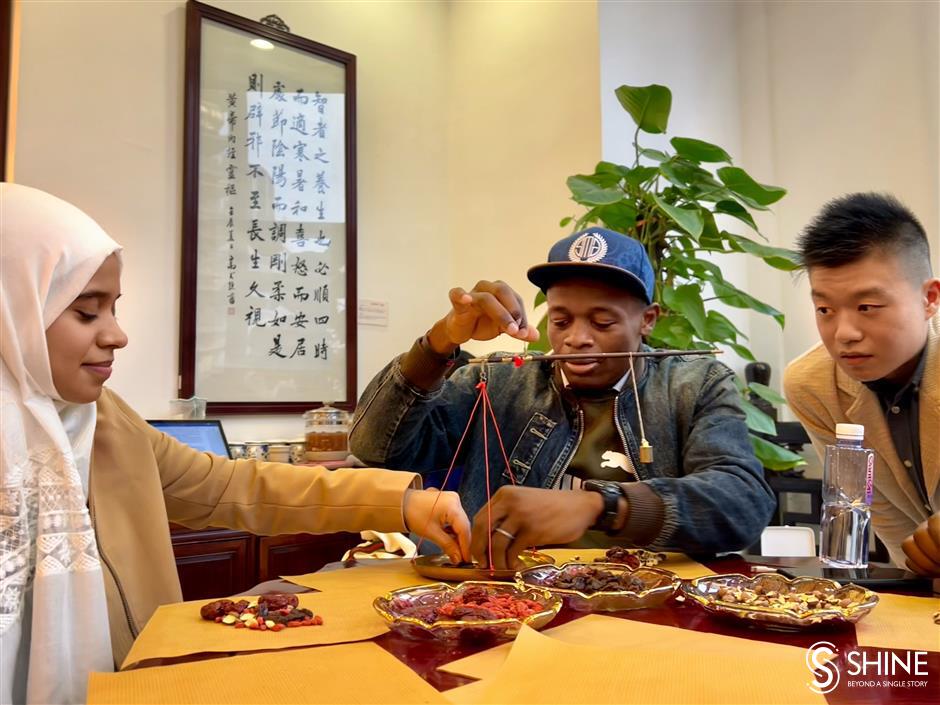 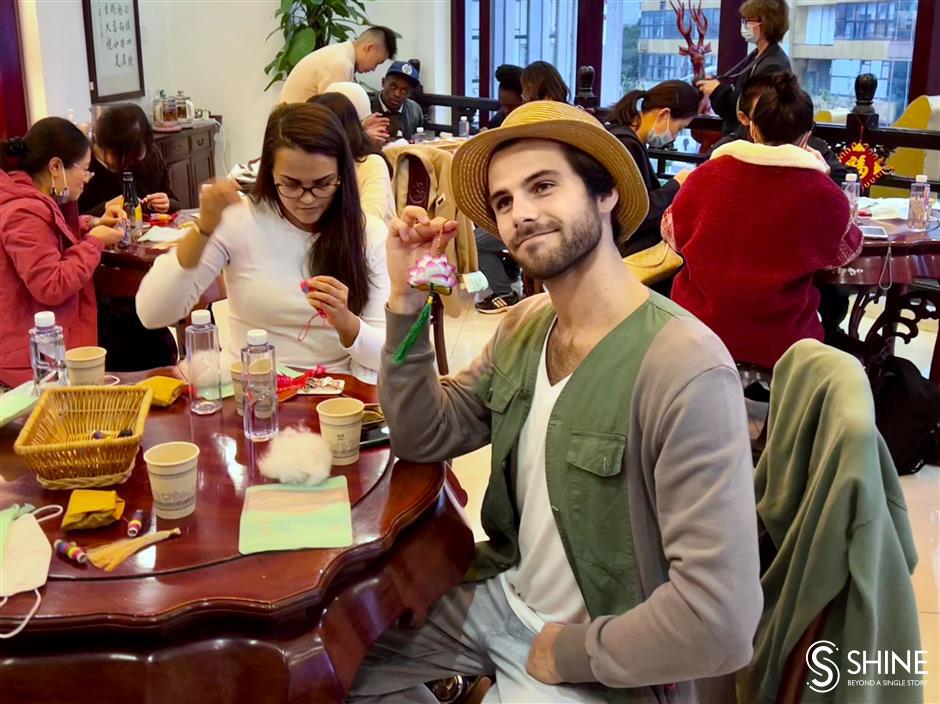 A dozen overseas students got the feel of a genuine centuries-old traditional Chinese medicine pharmacy in Shanghai on Wednesday afternoon.

The students, from countries like Liberia, the US and South Korea, now study at Shanghai University of Traditional Chinese Medicine's International Education College.

They visited the flagship store of renowned Lei Yun Shang West, with a history dating back 350 years, in the bustling Jing'ansi area. Tucked away on the third floor is a TCM clinic that harks back to the pharmacy's roots.

Its décor is in the style of a classical Chinese garden, featuring pillars, corridors, carved beams, wooden ornaments and antique furniture. The atmosphere is designed to give customers a deeper understanding of the culture of traditional Chinese medicine.

The students got to know about herbs, tasted herbal tea and made their own xiangnang, sachets filled with fragrant herbs and medicinal powders and used as clothing accessories or household decorations.

Wu Hao, a skilled traditional Chinese medicine pharmacist, can recognize over 1,000 kinds of medicinal herbs without even looking at them.

Nodem Saha Joël Wilfred from Cameroon had a try. He picked a herb from the plate, and Wu, blindfolded, quickly recognized it by its scent. It really impressed the student who would like to be called by his Chinese name Du Te, literally meaning unique. 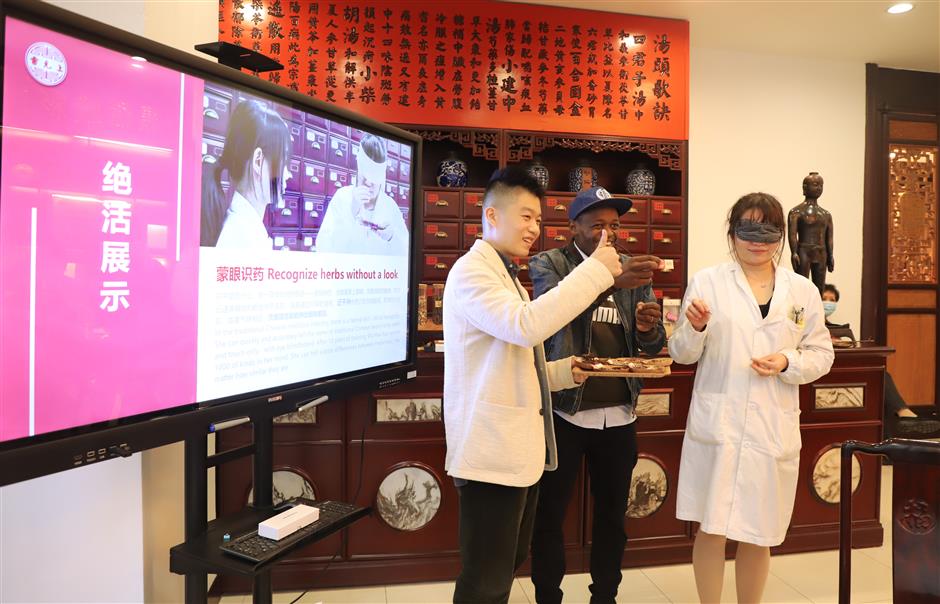 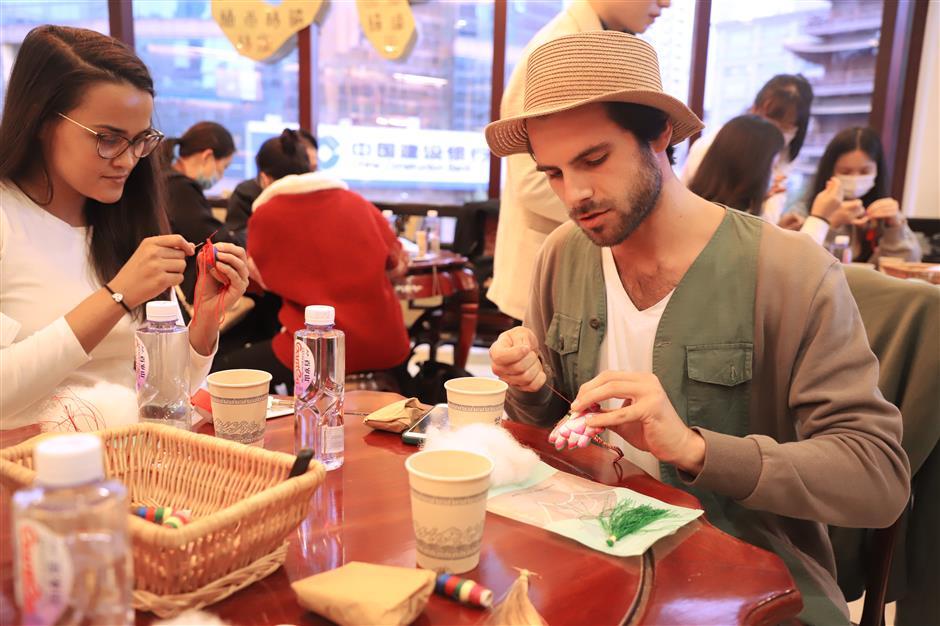 Johnathan Tertius Bougas concentrates on the intricacies of making his own xiangnang.

But what impressed Du Te the most was a herbal tea mixed with red dates, lotus seeds, dried longan and goji berries. It is reputed to be especially good for spleen health.

"Many people don't like drinking TCM because it usually tastes bitter. But this herbal tea tastes so good. I could drink it every morning, noon and evening," he said.

Johnathan Tertius Bougas from South Africa loved the herbal tea so much he drank several cups.

"Today was really fun because it was practical. I got to actually see, touch and weigh the herbs. I really learnt something," he said.

Bougas admitted to having experienced Chinese acupuncture treatment. He had injured his knee while wake boarding, a water sport, but he sort of ignored it. After some years, it got really bad, and he was told that he tore the meniscus in his knee.

"This was at a Western hospital and they told me the only way to fix that problem is surgery. And I was like 'Whoa! I didn't want surgery. I wanted something more natural.'

"They gave me acupuncture every second day, 12 times, 12 sessions. And it worked. I can run again. So, the acupuncture really worked for me," he said, adding that it also inspired him to come to China to learn about TCM.

Du Te now studies the integration of Chinese and Western medicines as he believes it is of vital importance.

"TCM is the future. Many people back in my country don't know about TCM. So I came to China to learn and to tell them it can solve many health problems. And I think it's important to integrate Chinese and Western medicines," he said.