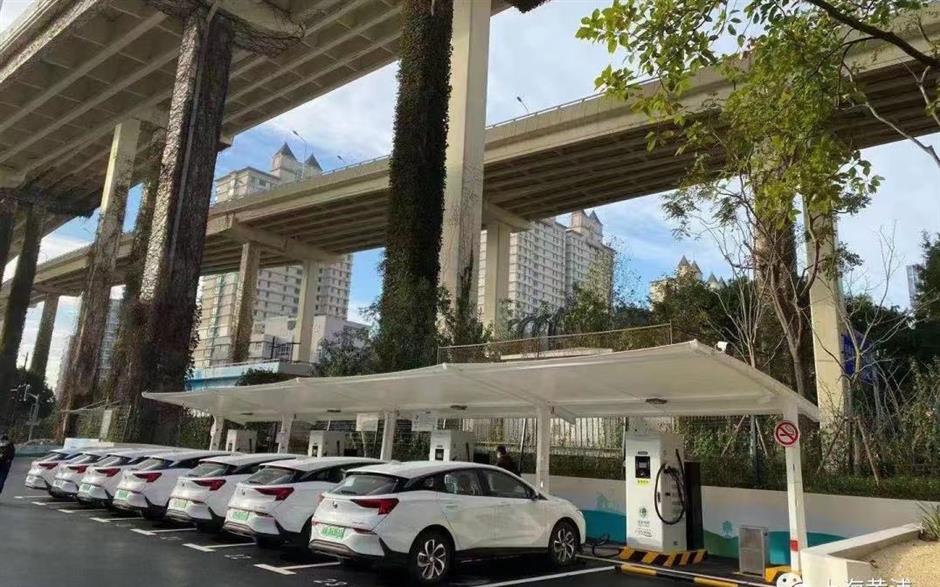 The newly-opened charging station beneath the North-South Elevated Highway.

The pilot charging station on Longhua Road E. in Huangpu District has 20 charging piles for 40 electric cars to charge simultaneously. It mainly serves private car drivers in nearby communities and new-energy taxis. Some 480 vehicles can be charged at the station every day.

The station beneath the North-South Elevated Highway covers over 5,000 square meters. It will operate round the clock with discounts during non-peak hours. It charges 1.5 yuan (23 US cents) per kilowatt hour during the peak period and about half during the valley hours. Drivers can pay through multiple mobile apps.

An "Energy Station" has also been set up at the site with lounges, restrooms, hot water, microwave stoves, vending machines and dining table. Taxi drivers can take some rest while waiting.

The new charging station is expected to help reduce over a ton of carbon emissions every day and 372.3 tons every year. The driving cost of an electric vehicle is only about a fourth of traditional motors with internal combustion engines.

China has announced that it will strive to bring its carbon emissions to a peak before 2030 and become carbon neutral before 2060.

To achieve the target, Shanghai has pledged to lower the proportion of coal in its primary energy consumption to around 30 percent by 2025, and add about 200,000 public charging piles for new-energy vehicles, according to a government work report released at the annual session of the local people's congress in January.

The megacity aims to bring its carbon emissions to a peak before 2025, five years ahead of the national target.

Shanghai plans to build 10,000 new public charging piles for electric vehicles in 2021. More than 2,500 piles have been installed in Huangpu to create a "convenient, efficient and green" transport system, according to the district government.