Canada Goose under fire over no-refunds policy in China's mainland 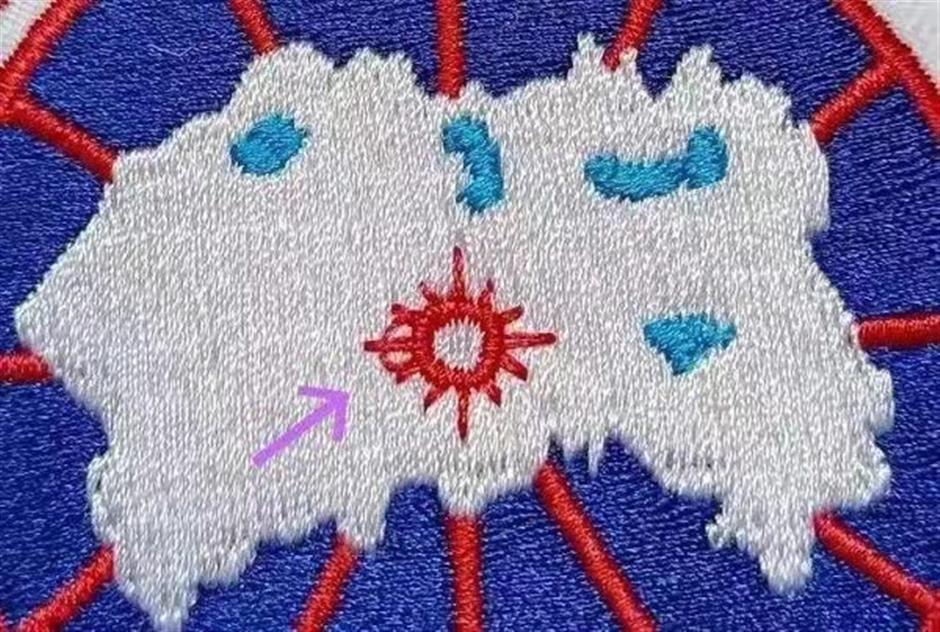 The Canada Goose logo incorrectly embroidered on the coat 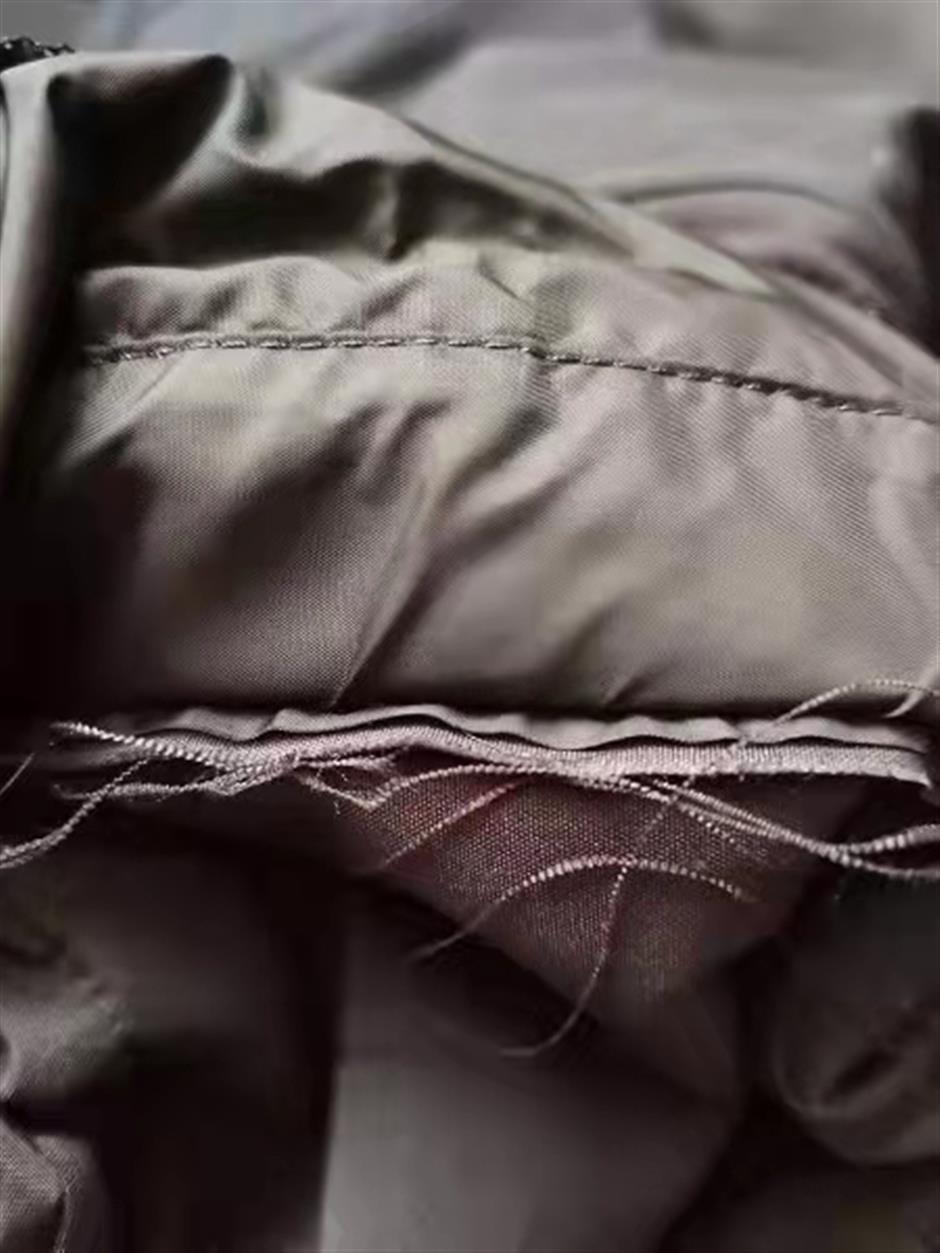 Rough stitching on the coat

The Canadian clothing brand Canada Goose has come under fire again, this time over its no-refunds policy in China's mainland.

Following media reports, the company said on Wednesday that it now allows a return and a refund for products sold at all Canada Goose retail stores in China's mainland under applicable laws, according to a statement it released.

A woman surnamed Jia told Chinese media outlets on Tuesday that a Canada Goose down jacket that she bought at a shopping mall in the Pudong New Area had quality problems, and her request for a refund was refused.

The coat, on which she spent 11,400 yuan (US$1,792) at a Canada Goose store inside Shanghai IFC Mall in late October, had a pungent smell and rough stitching, Jia said.

Moreover, the Canada Goose logo was wrongly embroidered with one extra arc in the sun, she said.

Jia said she was not aware that the product could not be returned before payment because she was not informed as such by staffers.

She was asked to sign an exchange policy after payment, which stated that all products sold at Canada Goose retail stores in China's mainland are strictly non-refundable unless otherwise provided by applicable laws.

Jia said as she was told that she could not take the clothing unless she signed the paper, and she signed it as a result. 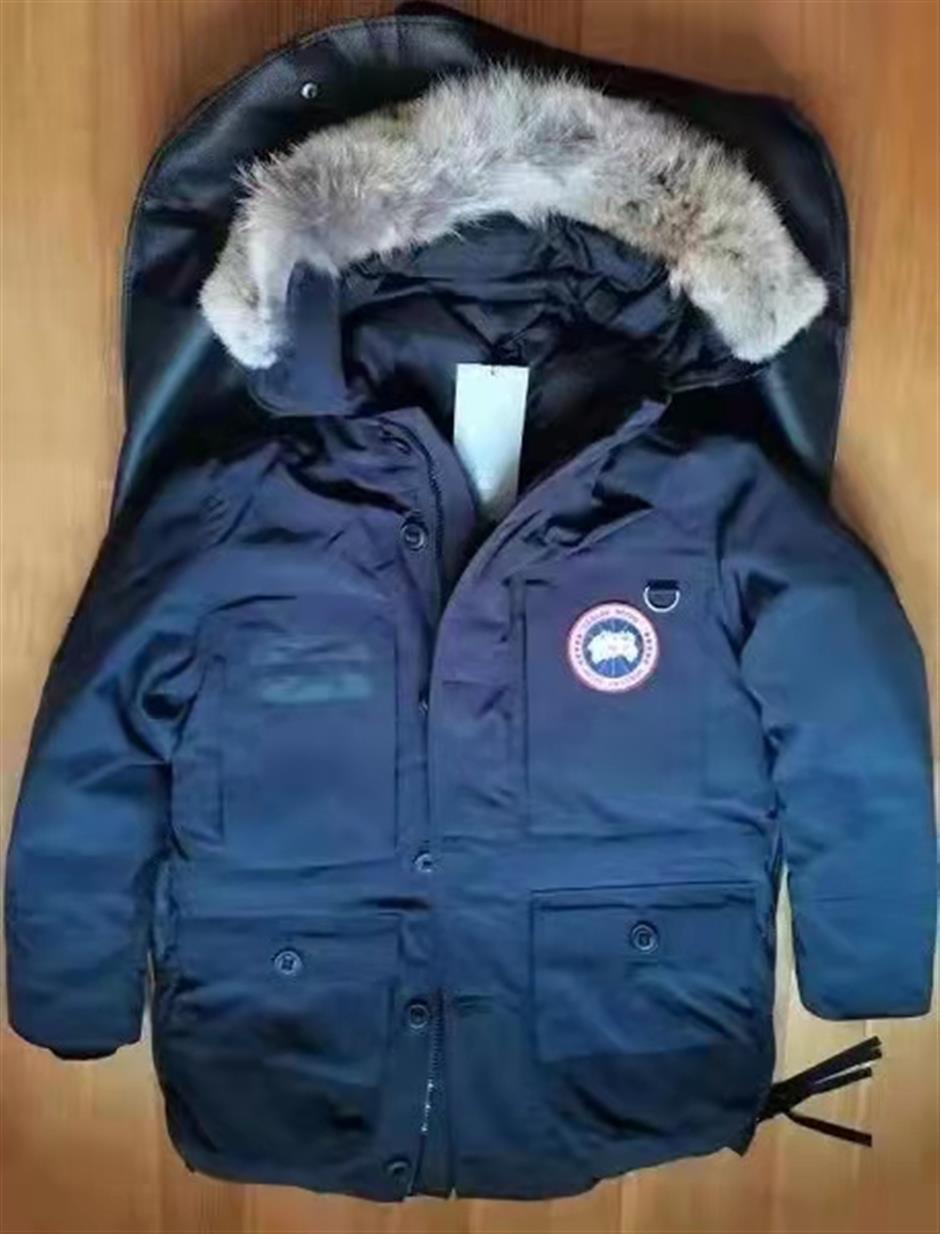 The down jacket bought by Jia 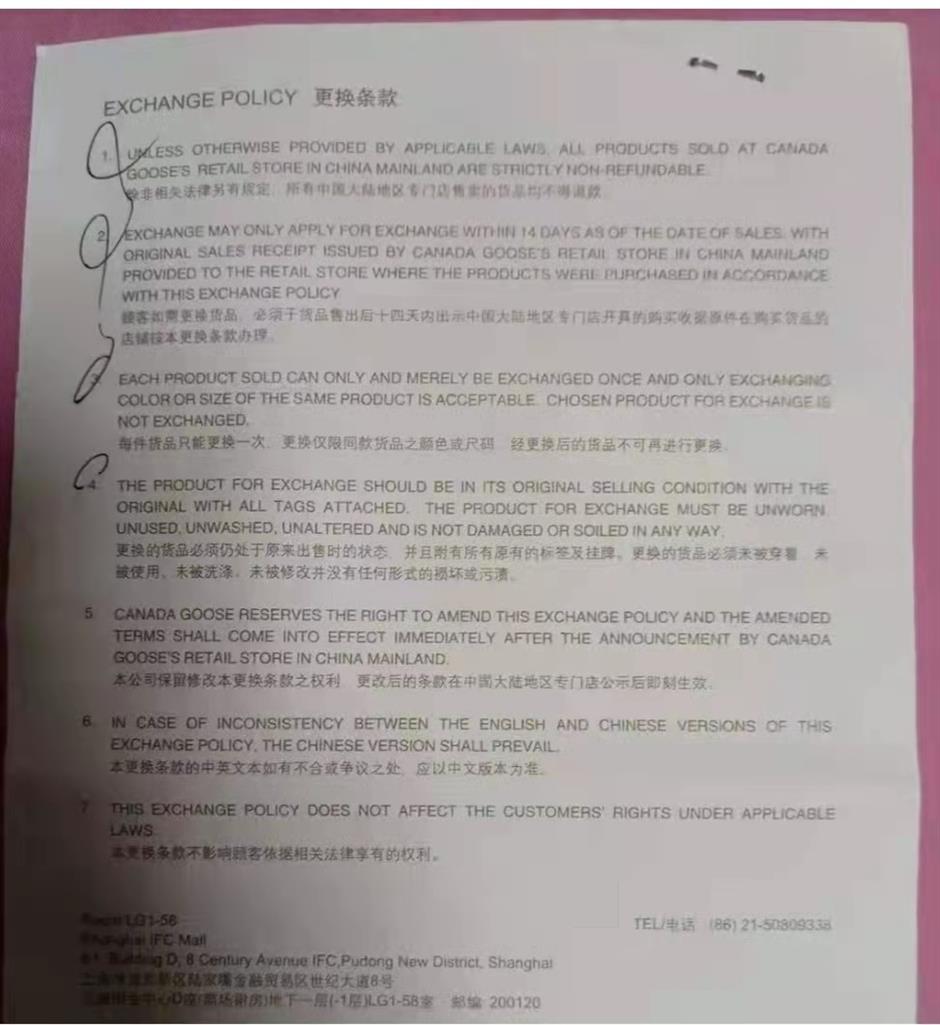 The paper signed by Jia.

Jia tried different ways to fix the problem such as calling the company's hotline and sending emails, but all methods she attempted failed.

"Shop with confidence and flexibility this holiday season with our extended return policy, giving you one less thing to think about this time of year.

Consumers are eligible to ask for a refund for substandard products, and the practice of not informing Jia of the non-refundable policy before her payment and asking her to sign the paper after the payment infringed her consumer legal rights and interests, said lawyer Qin Yubin.

Consumers can even ask for compensation for products with quality problems, said Qin.

Consumers can ask for a refund, or ask retailers to exchange or repair the products if the products are not up to standard, according to China's consumer rights protection law.

During a talk with representatives of the company on Wednesday, the Shanghai Consumers Council ordered Canada Goose's Shanghai subsidiary to submit an explanation over its exchange policy by noon on Thursday.

In a separate incident, a Shanghai resident complained that a significant amount of the down in a Canada Goose coat she purchased overseas at 5,000 yuan came out, and her application for lifetime warranty service from the company was not satisfied, except that it offered to clean it.

Earlier, the Shanghai subsidiary of Canada Goose had been fined 450,000 yuan by the market watchdog in Huangpu District for false promotion.

It released written content claiming the down material in all down jackets sold at the store contained Hutterite down, which "is of good quality and is the most thermal Canadian down," according to the Huangpu District Administration for Market Regulation.

Experts at the China Feather and Down Industrial Association and the Shanghai Garment Trade Association noted that the thermal performance of down depends on the filling power and down content, which is relevant to the growth period and size of birds.

In other words, it has no relation to the production site, so stressing Hutterite to highlight the thermal performance of down is groundless, the administration said.

Moreover, the down used in the garment sold by the company also fell short of "the most thermal Canadian eiderdown" based on testing results as the administration found.

The sales volume of the store hit 167 million yuan last year, according to the administration.

The company has been ordered to stop releasing the promotional material and rectify the situation.