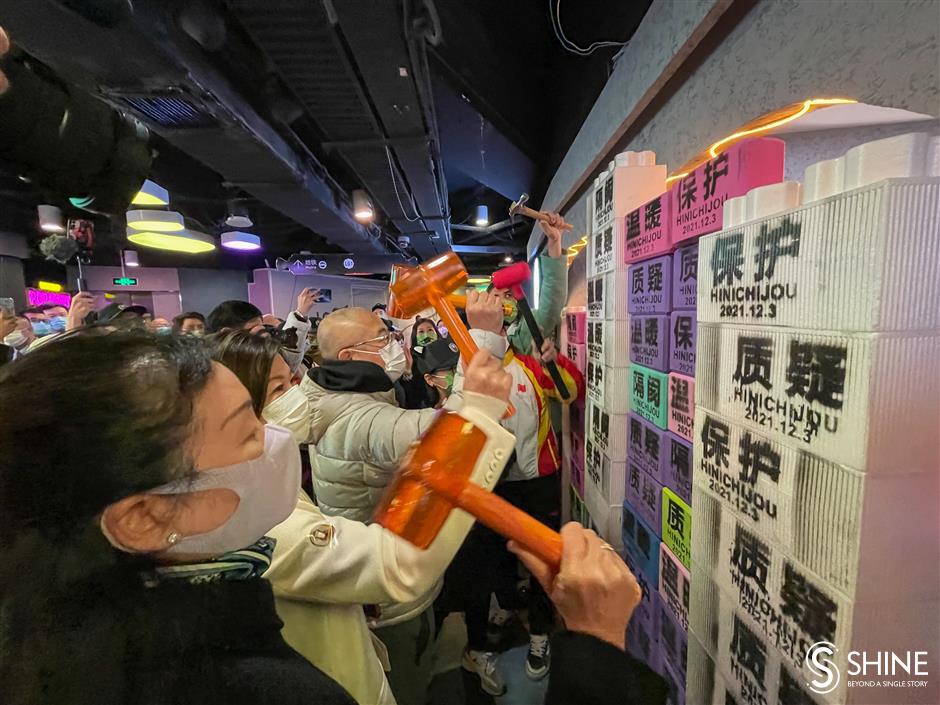 People smash a wall of plastic bricks written with words like "protection" and "barrier." 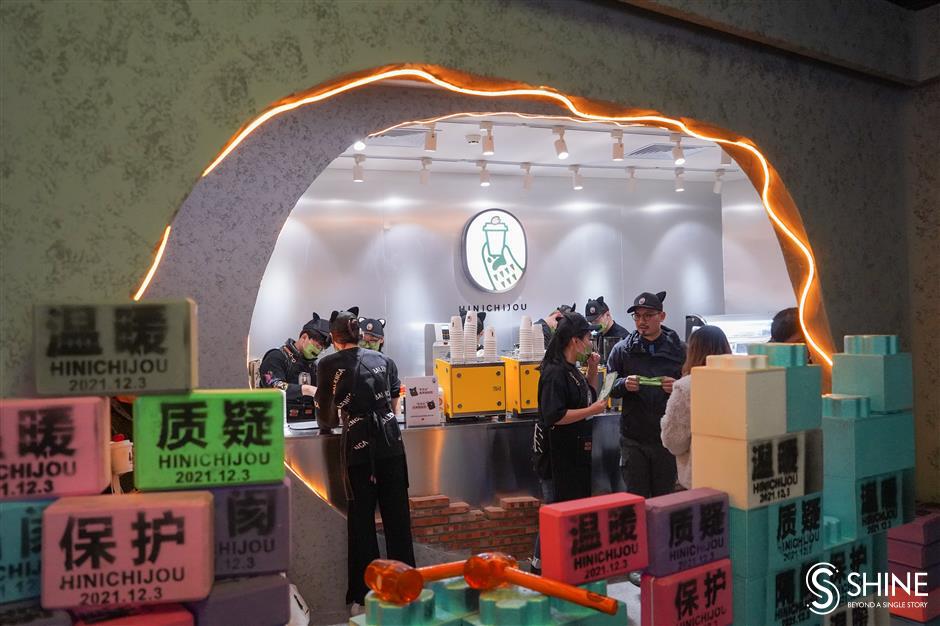 Retired Paralympic runner Yun Weiping came from Hefei to Shanghai for the opening ceremony of the first fenceless "bear paw café" on Friday, the 30th International Day of People with Disabilities.

The café, officially called Hinichijou, is popularly known as "bear paw café" because it started as a hole-in-the-wall café, literally, where a furry brown paw emerged from a hole to serve coffee. The wacky service mode was created for disabled employees.

One year on, it has grown from a single "bear hole" to a chain of nine outlets, including one in Nanjing and one in Hangzhou. It's also time for disabled employees to move forward.

In the newest Hinichijou outlet in the Crystal Galleria shopping mall in downtown Jing'ansi, they can serve customers face to face. 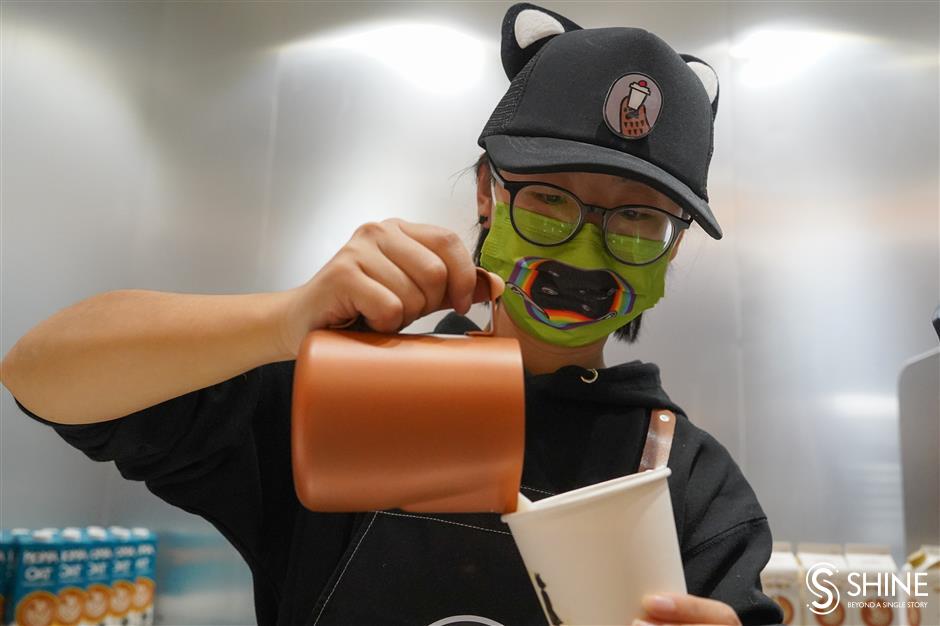 "We built the wall in order to break it down," Hinichijou chief executive officer Chen Dake told Shanghai Daily.

Over 60 percent of the staff have disabilities, such as hearing impairments and facial burns. Many of them are shy and phobic about social contact. The wall protects them from curious glances, but it also prevents them from coming out of their shells.

"It took us a year to build up their confidence. Now, they can take it easy and face society. They don't need the wall any longer," Chen said.

People turned a cold shoulder on her, and she had fallen into a bleak depression -- but she's grown stronger.

"It's not only a job. It helps me find myself and the meaning of life," Chen said. "Gradually, I became confident and open to the world. Now, I'm living the life I want." 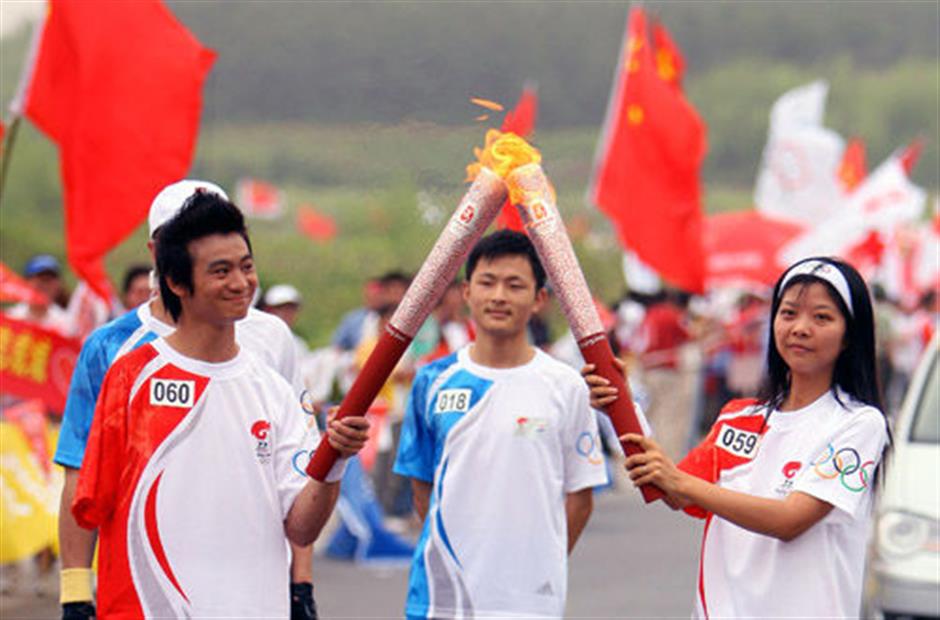 Yun Weiping (left) during the torch relay in 2008

Yun, a 38-year-old amputee, brought the Olympic torch he carried in Beijing in 2008 to the scene. Fair play, as written in the Olympic spirit, is what he expects in today's society.

He joined the café's staff to "smash" the walls built up by plastic bricks written with words like "protection" and "barrier."

"I felt like smashing the wall of doubts and discrimination," Yun said.

Yun lost his right arm in an accident in 1999, but didn't lose his passion for life. Like any other youngster, he likes visiting wanghong (Internet celebrity) cafes. Soon after the first Hinichijou store opened, he came to have a sip.

"The store staff told me the coffee was free for me since I am a disabled man. Then, we became friends. So I came to celebrate the opening of the new store," he said. "I hope it raises more awareness about the employment of disabled people. Also, I hope it can promote equal treatment for disabled people."