A Laotian letter of thanks to President Xi Jinping 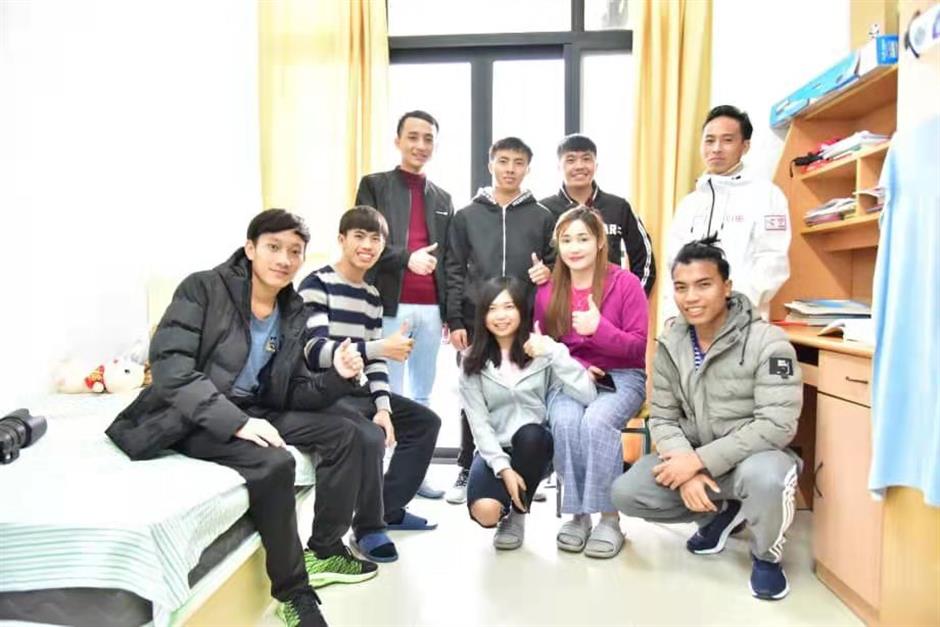 The first group of Laotian railway engineering graduates from the Shanghai Institute of Technology.

Chinese President Xi Jinping said at the launching ceremony of the China-Laos Railway on Friday that he was glad to receive a letter from some Laotians who had studied in Shanghai and wished to make a contribution to the operation and development of the railway.

The nine Laotians are graduates from the Shanghai Institute of Technology, and the letter was written on November 18 to express their gratitude to China for preparing them as the first group of engineers and technicians to serve the first modern railway in Laos.

Here is a translation from the letter written in Chinese.

We are the first class of Laotian railway engineering majors graduating from the Shanghai Institute of Technology. We feel extremely excited and joyful to write you this letter at this historic moment, marking the 100th anniversary of the founding of the Communist Party of China, the 60th anniversary of the establishment of diplomatic relations between China and Laos and the countdown to the opening of the China-Laos Railway. All nine of us have successfully graduated this year, and we are very honored to join the forces to serve the China-Laos Railway and be the first group of engineers and technicians after its opening!

Looking back to our studies in China over the past few years, we are delighted to find that we are both beneficiaries of the Lancang-Mekong Cooperation and witnesses of China-Laos friendship. We are a very lucky generation of Lao young people. The knowledge we learned at the Shanghai University of Technology, particularly the special engineer cultivation approach of the university's ASciT program, has changed our destiny. Learning in Shanghai allows us to catch up with the development of China in the new era, and with the link of the world's most advanced railway from China into Laos and into the heart of each of us.

We remember you said that China and Laos are good neighbors, good friends, good comrades and good partners who have a shared future. As a Lao saying goes, "Friends are relatives without blood ties." We have witnessed the precious friendship between our two countries in the most difficult times, when we offer timely help to each other in fighting against the pandemic. We have personally felt that China and Laos share a common destiny with each other. More happily, our alma mater has set up the Belt and Road Lancang-Mekong Railway Connectivity Center and the Belt and Road China-Laos Railway Engineering Joint International Lab with support from the Shanghai government. They have created better learning conditions for Laotian students coming to study after us and enable them, together with their Chinese friends, to better connect with the world, and better implement the Belt and Road Initiative you proposed.

After graduation, we returned to our hometown and began to work. As a saying goes, "Remember the gifting of farmland when eating rice, and remember the grace of water when eating fish."

As we are increasingly missing China, our second home, we also became more and more eager to write to you. We know that it is your Belt and Road Initiative that has given us the precious opportunity to study in China and the coming forth of the dream to become Zhan Tianyous of Laos. [Zhan Tianyou (1861-1919) was the chief engineer responsible for construction of the first railway constructed in China without foreign assistance and is known as the "Father of China's Railway."]

Today, we want to express our gratitude to China and also our thanks to you by writing this letter.

Most importantly, the China-Laos Railway is about to open to traffic. Our greatest hope is to have the opportunity to meet you and our Chinese teachers and friends in Laos and on the China-Laos Railway in the future, so that you all can see our learning achievements and walk on this promising road to a bright future for our two countries.

We wish you good health and all the best! 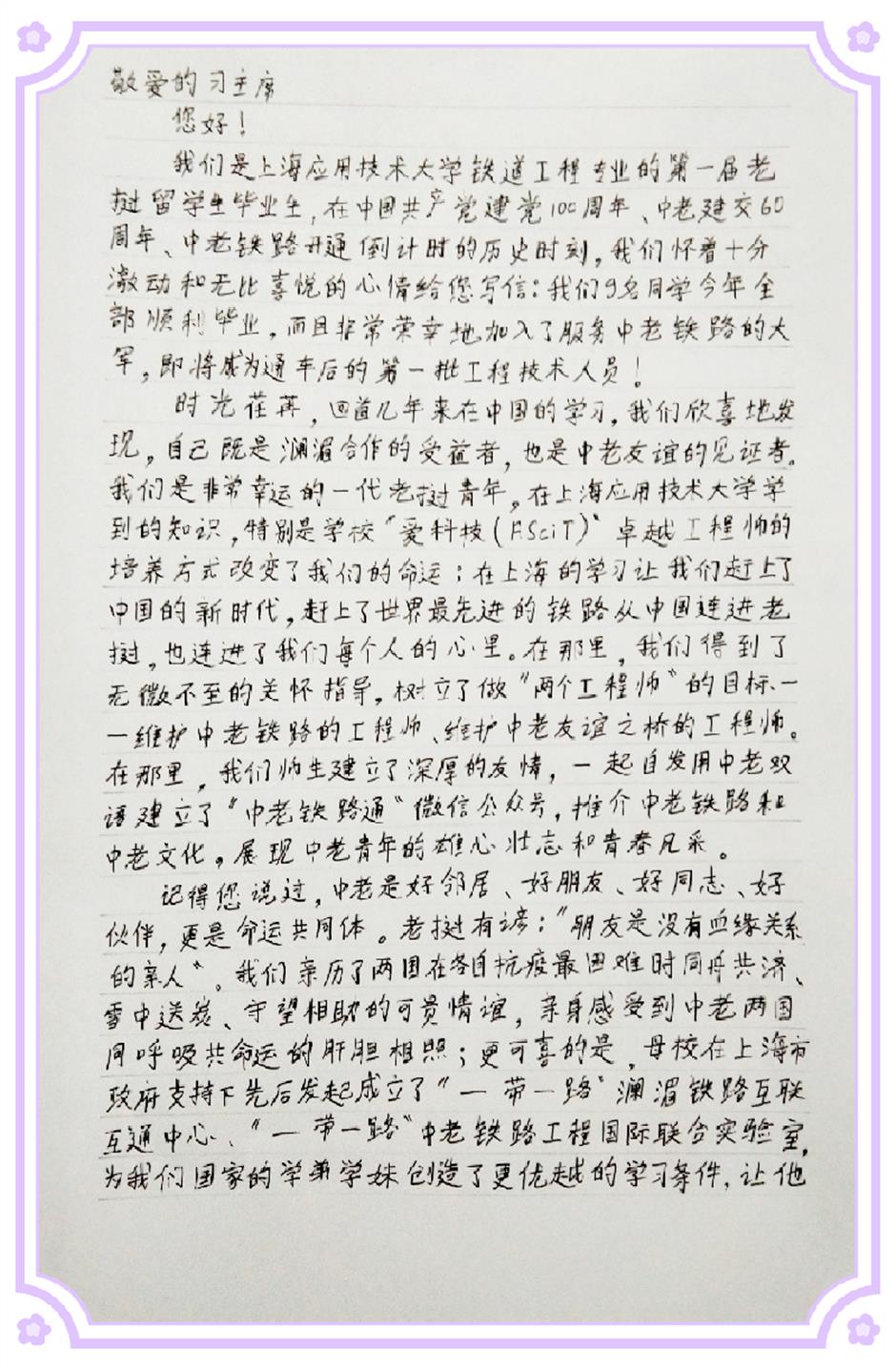 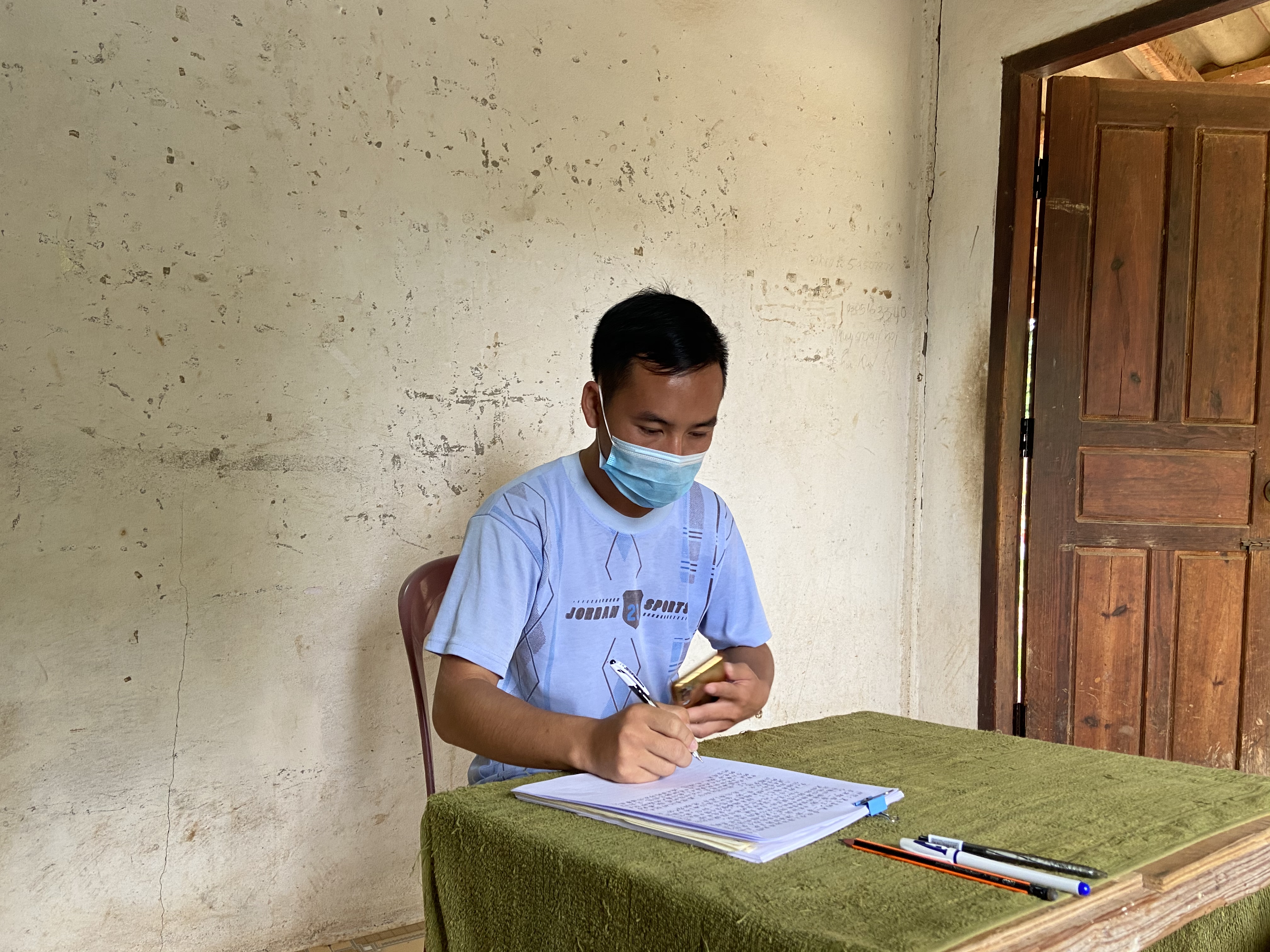