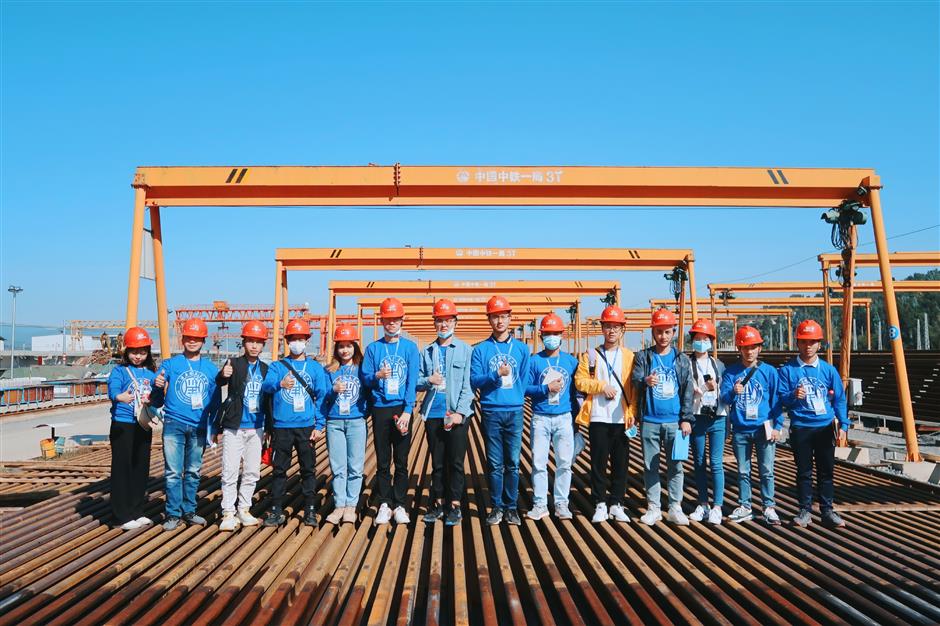 Nine Laotian graduates of Shanghai Institute of Technology are now employees of Laos–China Railway Company, a Sino-Lao joint venture set up in Vientiane specifically for the construction and operation of the China-Laos Railway.

Nine Laotian graduates from the Shanghai Institute of Technology have studied their way to become railway engineers and technicians to serve the first modern railway in Laos, thanks to the Belt and Road Initiative.

The 1,035-kilometer passenger and cargo railway, connecting Kunming with the Laos capital Vientiane, also brings hope of further prosperity and development for Laotians.

"We are so proud that we've participated in the construction and will be the first batch of Laotian engineers and technicians to serve the railway, the first one in our motherland," said La Thor, one of the nine Laotian graduates from the Shanghai Institute of Technology. 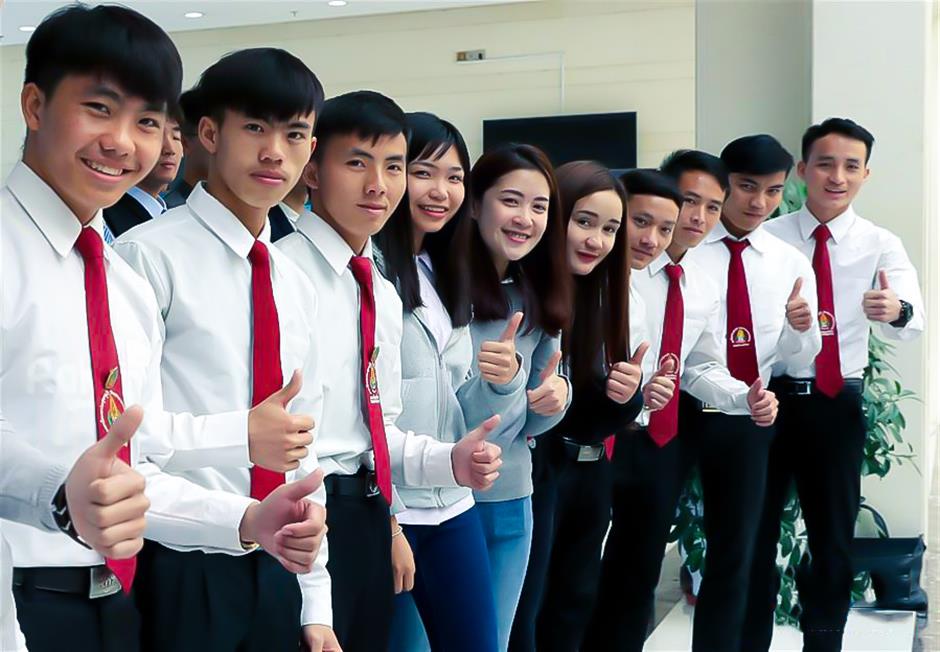 The Laotian students pose for a group photo.

In 2017, the institute signed a cooperation framework agreement with Souphanouvong University in the southeast Asia country.

Since 2018, Souphanouvong University has sent 31 undergraduate and master's students to study in Shanghai.

At the end of 2020, the first batch of nine Laotian undergraduates returned home and were assigned to the China-Laos Railway construction site for graduation practice.

After graduation in June, they started working for the China-Laos Railway Company, a Sino-Lao joint venture set up in Vientiane specifically for the construction and operation of the railway.

They are now receiving orientation ahead of their service tenure with the railway. 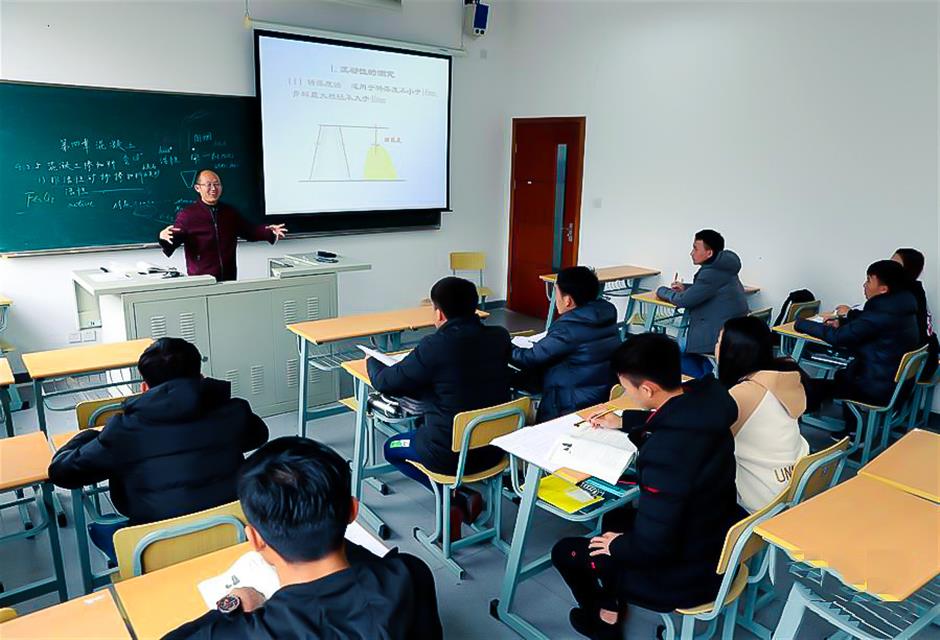 Laotian students attend a class at the Shanghai Institute of Technology.

Thor, from Luang Prabang Province of Laos, said when he was studying in high school, some Chinese workers were conducting surveys related to railway construction in his hometown. Thor and his father had assisted them in doing some work.

"From them, I got to know that the Chinese government planned to help us build railways under the BRI, which would not only help develop the economy of our country, but also make our life better," he said.

"Though I didn't quite know what the BRI was and how complicated it was to build railways, I thought it was great and an idea came to me: I want to study civil engineering and work as an engineer for railway construction in the future."

The next year, he enrolled into Souphanouvong University as a civil engineer major.

"In classes, our teachers told us that the China-Laos Railway was the largest project in the history of our country with China's support, and it was also the No. 1 project in our country," he said. "At that time, I came up with an idea of studying in China and signed up for classes to learn Chinese." 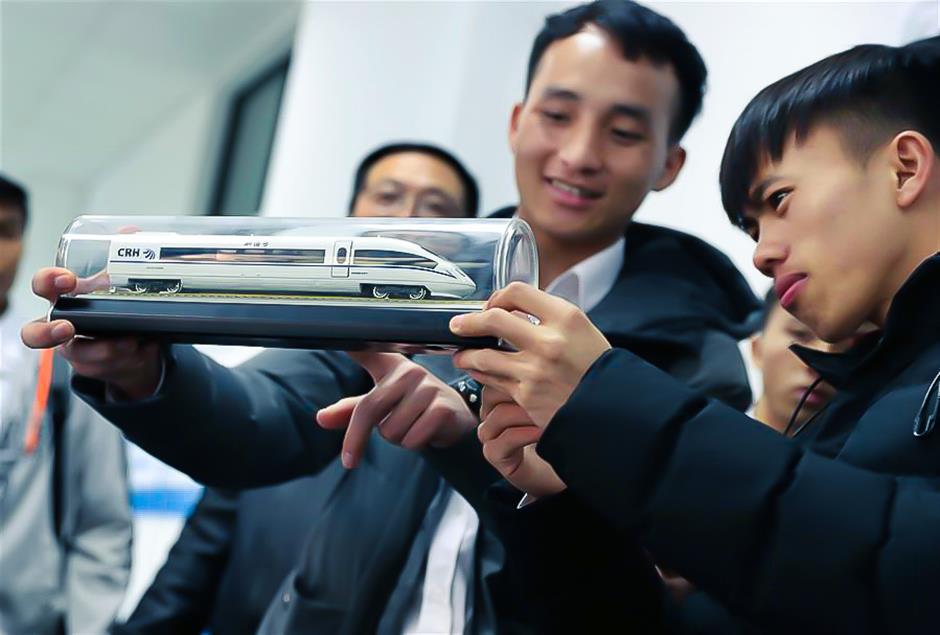 In May 2018, the school radio broadcast the program of studying railway engineering at the Shanghai Institute of Technology, and many students submitted applications.

Thor was one of the nine who passed interviews with Shanghai teachers to join the program one month later.

"Before going to China, I only knew that China was a great country and Shanghai was a modern city," he said. "When I started learning in Shanghai, I found it was a friendly city. We were happy to live and study there."

Over the following two years, the school arranged plenty of courses for them, ranging from Chinese language and railway engineering to visits to metro and railway companies and travel by high-speed trains.

"The most exciting moment came in 2019 when we took the Fuxing bullet train to Beijing," said Chengxue Thoryiachor, Thor's classmate.

"I had only seen bullet trains on television, and it was the first time for me to take the bullet train and see the beautiful scenes along the railway. I felt it was much more comfortable than travelling by plane or by car.

"At that time, I really hoped that my homeland would also have high-speed trains and metros like China."

In Beijing, the students went to the Great Wall and the Zhan Tianyou Memorial Museum. Zhan (1861-1919) was the chief engineer responsible for the construction of the first railway in China without foreign assistance and is known as the "Father of China's Railways."

"We all wish to be Zhan Tianyous for Laos," he said.

Now, they are on their way to realizing their dream, embellishing the China-Laos Railway with their wisdom and sweat. 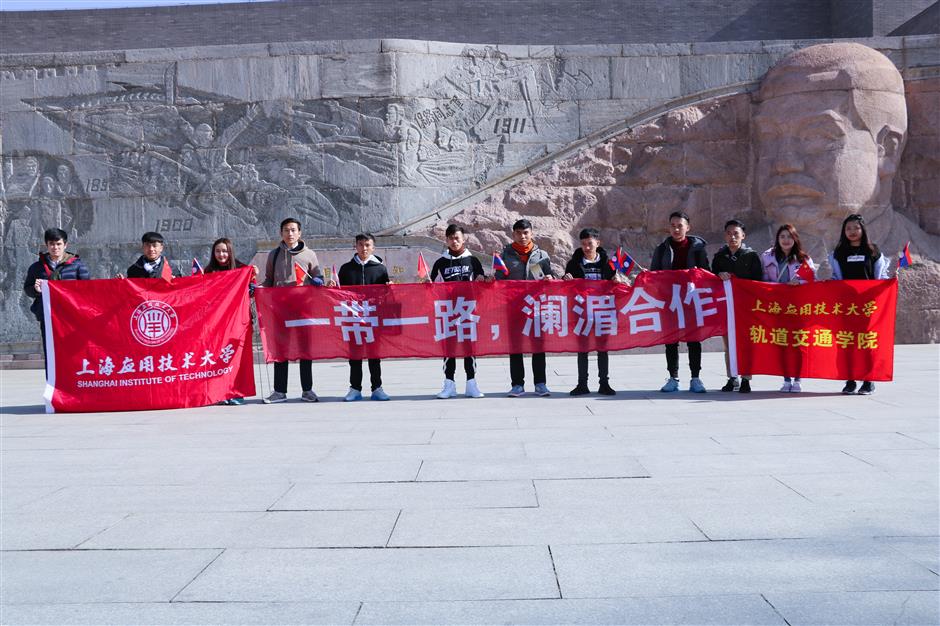 Laotian students pay a visit to the Zhan Tianyou Memorial Museum in Beijing.

During their internship, Thor had worked with workers from China Railway No. 2 Engineering Group in anchoring, paving rail tracks and laying signs between Luang Prabang and Boten stations.

Leemoua Yiakeexaitouxiong, another Laotian student, joined the survey team from the China Railway No. 5 Engineering Group to take measurements in all kinds of conditions.

"It was very hectic and sometimes we had to work until midnight," he said. "But I felt happy because I could practice what I had learned at the university and learned what I could not learn from books. I know that in the future, Laos will need all kinds of talent related to railways. So we need to learn as much as possible."

Though they have travelled along the railway by engineering vehicles, they were unable to take the first train as they had to receive orientation and due to pandemic restrictions. 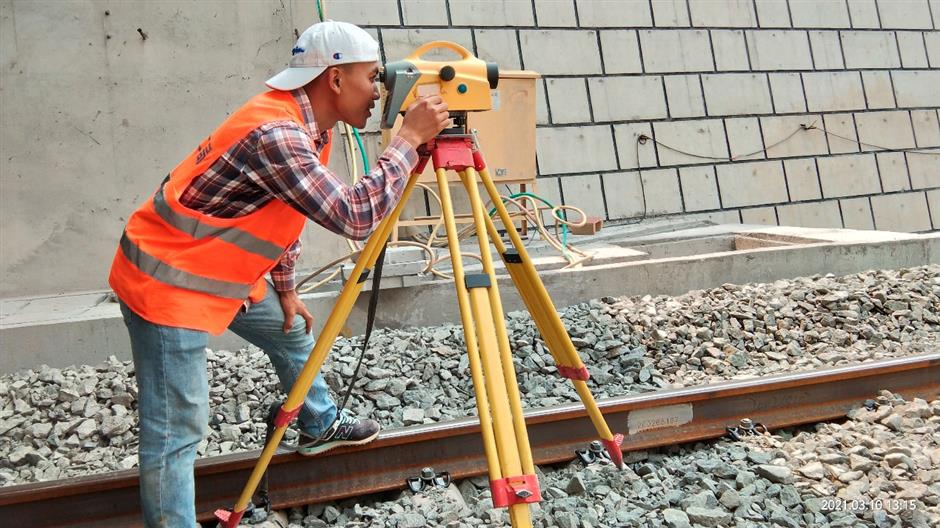 Measurements are important for railway construction.

Sou Xong, another Laotian graduate who had studied in Shanghai, said they went to Luang Prabang Station on Friday to record how the train passed.

"There were no modern railways in Laos and many people don't know the importance of railways and the convenience they can bring, so we want to enlighten them with the truth," said Thor.

Thor said he had to spend more than 10 hours to travel from his hometown in Luang Prabang to Vientiane.

"But thanks to the China-Laos Railway, it takes only about two hours," he said. "What a big change!"

"In the future, people from Laos can take a trip to see the wonderful views in China, and also people in China can travel to my beautiful hometown," said Vongthor Chonglao, another one of the nine graduates. 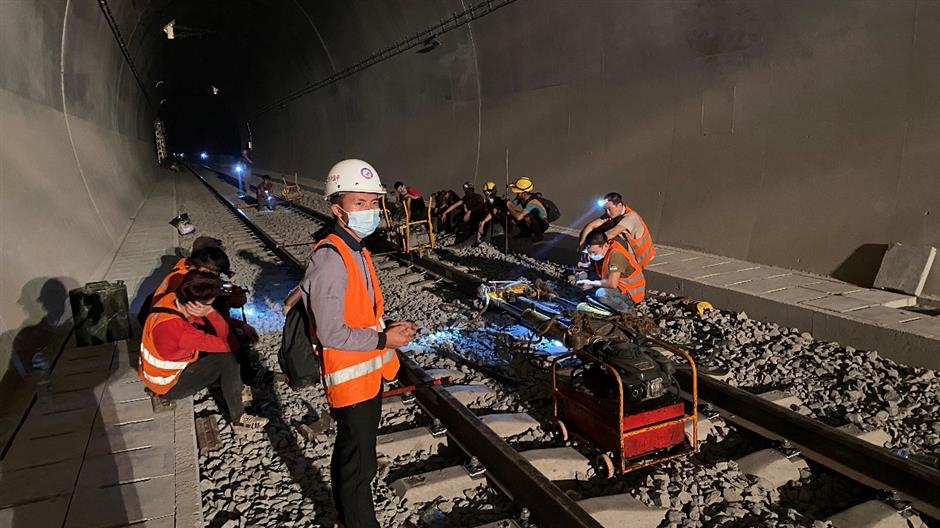 To express their gratitude for China's help and excited by the launch of the railway, the nine students wrote a letter to Chinese President Xi Jinping, expressing their wish to serve the development of the railway and the friendship between China and Laos.

The letter was mentioned by Xi at the launch ceremony of the railway on Friday.

Xi's speech was sincere and inspiring, the students said, adding that it gave them great encouragement.

All the nine graduates said they will study harder and work diligently to maintain the China-Laos Railway as well as bilateral friendship. 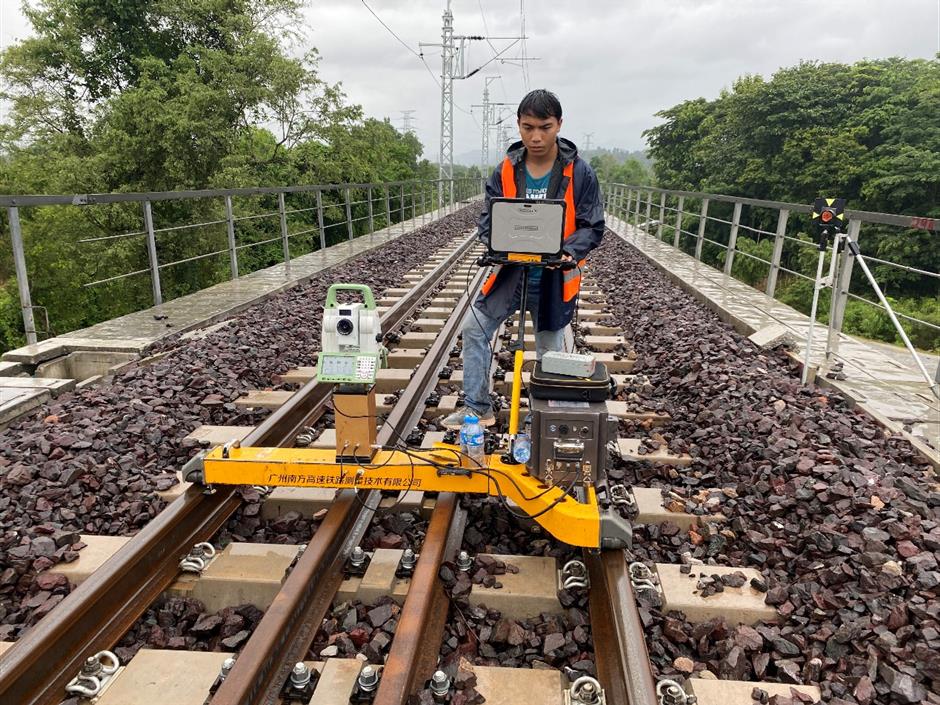 A Laotian student participates in construction of the China-Laos Railway.

"The China-Laos Railway is the flagship of the BRI, and also one of its most successful models," Huang Renwei, deputy dean of the Fudan Institute of Belt and Road & Global Governance said, underlining the significance of the railway's opening during a discussion about the R&D, hosted by the college on Saturday.

Huang said the railway will not only improve the infrastructure in Laos, but also "shorten its distance" from other countries.

"From Vientiane to Kunming, it took about 30 hours, now it takes only 10 hours and in the future, it will further be shortened to six to seven hours," he said. "It will help enhance economic exchanges and industrial connection between Laos and China. China's huge tourist flow will also help improve tourism in Laos significantly.

"The railway will convert Laos from a land-locked country to a land-linked country, as it will stretch to Thailand, Malaysia and Singapore in the future, boosting its development further." 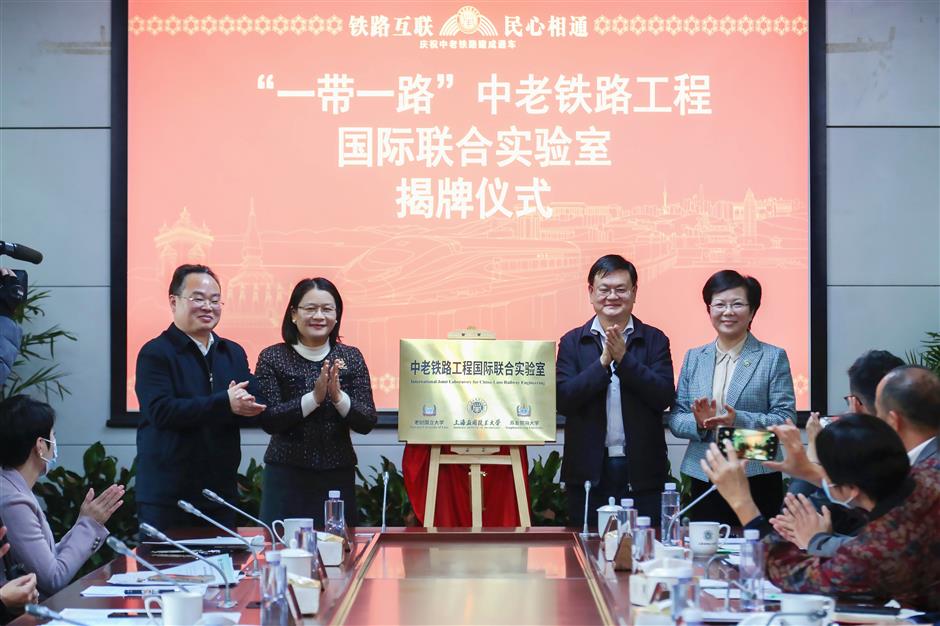 The International Joint Laboratory for China-Laos Railway Engineering is unveiled.

Li Wenju, Party Secretary of the School of Railway Transportation of the Shanghai Institute of Technology, said the school will continue cooperating with Laos in cultivating railway talent, and extend the service to other BRI countries, via not only education for students, but also training for staff and cooperation on research, such as preventing and reducing natural disaster damage on the railways.

Meanwhile, the college announced the setting up of an international research lab for the China-Laos Railway.

"We must make good use of the resources of the many universities, bases, platforms, and open windows in Shanghai to further contribute to the construction of the BRI," Chen Jing, head of the Shanghai People's Association for Friendship with Foreign Countries.

Early this year, a BRI Lancang-Mekong Railway connectivity center was also established to serve the railway construction, according to Chen.