Drumbeats and sounds of paddling can be heard frequently on the Minhang campus of Shanghai Jiao Tong University these days though it's not the Dragon Boat Festival season.

A dragon boat rowing course has gained popularity among students not only as a traditional Chinese cultural heritage but also as a sport to boost physical health and group work spirit.

"This semester, we opened two dragon boat classes for undergraduates and places were snatched up immediately on their release online," said Gu Gensheng, a teacher of the class and coach of the university's dragon boat race team. 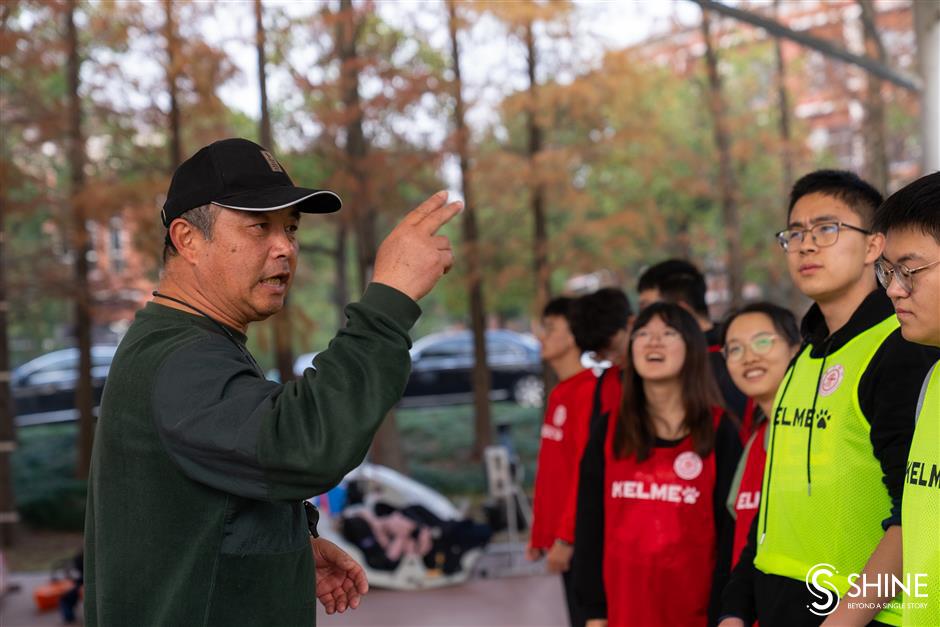 Dragon boat race is a traditional Chinese folk custom that originated during the Warring States Period (476-221 BC). It's an iconic activity to celebrate Duanwu, or Dragon Boat Festival. It is said to have originated in the legend of people paddling out to save Qu Yuan (343-278 BC), a famous poet minister of the Chu State, who drowned himself in a river protesting against the occupation of his country by the State of Qin. Because Qu died on the fifth day of the fifth lunar month, Dragon Boat Festival is observed every year on that exact day.

Dragon boat races are seen in Shanghai waterways, such as the Suzhou Creek, every year around the festival.

The race began to be widely promoted in local schools in 2015, when the Shanghai Education Commission launched a campaign to bring traditional sports on to campuses.

"Dragon boat classes in universities don't have a long history but the course has gained popularity among students, with its charm of traditional Chinese culture, the physical exercise and the spirit of group coordination," said Gu, who revealed that the course was first opened to postgraduates in SJTU two years ago and began to accept undergraduates in response to appeal from students. 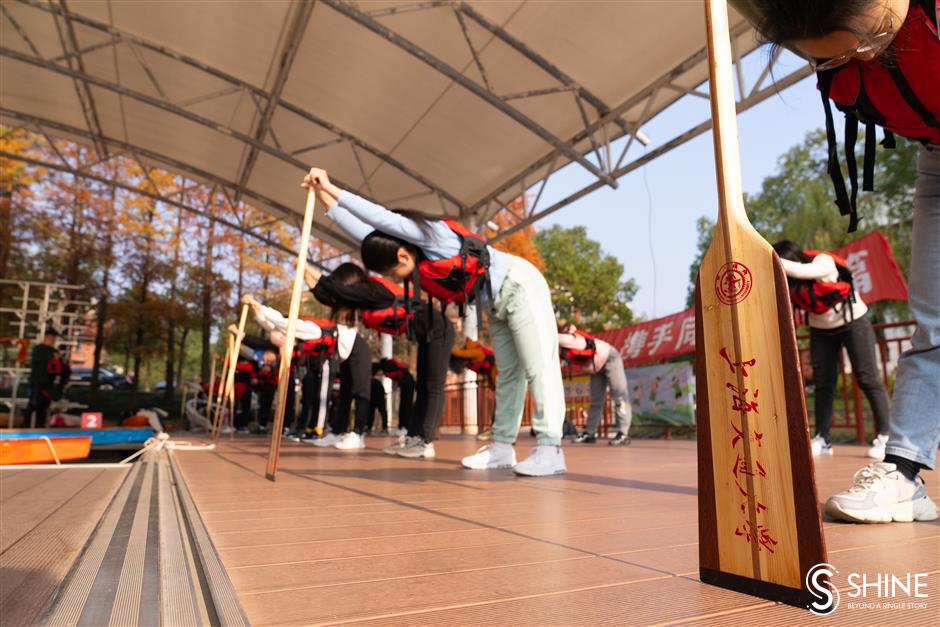 Students do warm-up exercises in the class. Currently, there are four classes, with 20 students each. In the 90-minute class each week, students learn skills, such as paddling, drumming, rudder control and cooperation among the drummer, the steersman and the paddlers, as well as race rules, such as the way to get on board and go ashore. After class, they practice swimming and undergo physical training.

"For an aquatic sport, we require that all students applying for the class must know how to swim," Gu said. "And during the training on water, they are required to wear life jackets, while a life boat is always on standby. And they also need to improve their muscle strength." 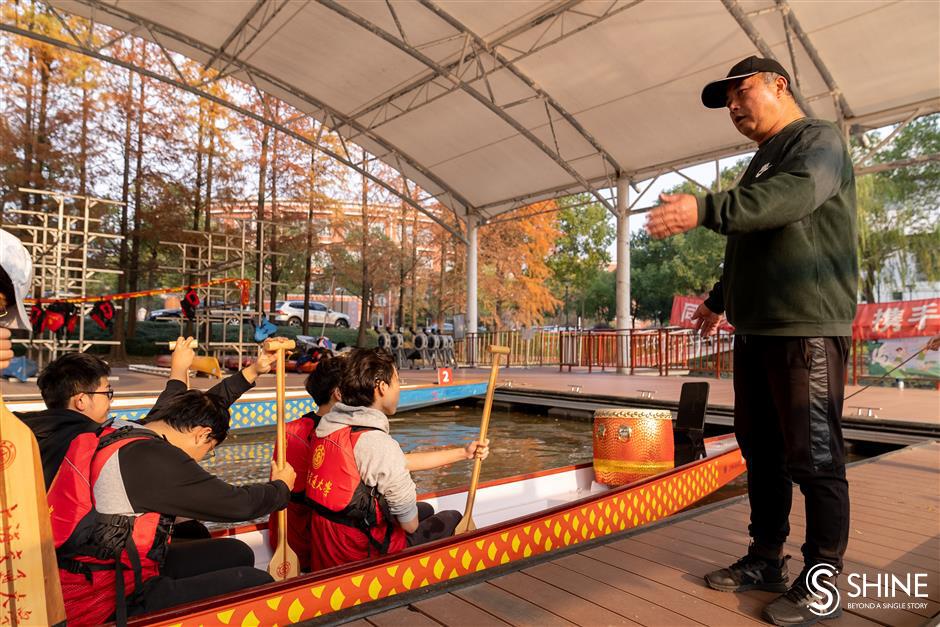 Students get aboard a dragon boat under Gu's guidance. 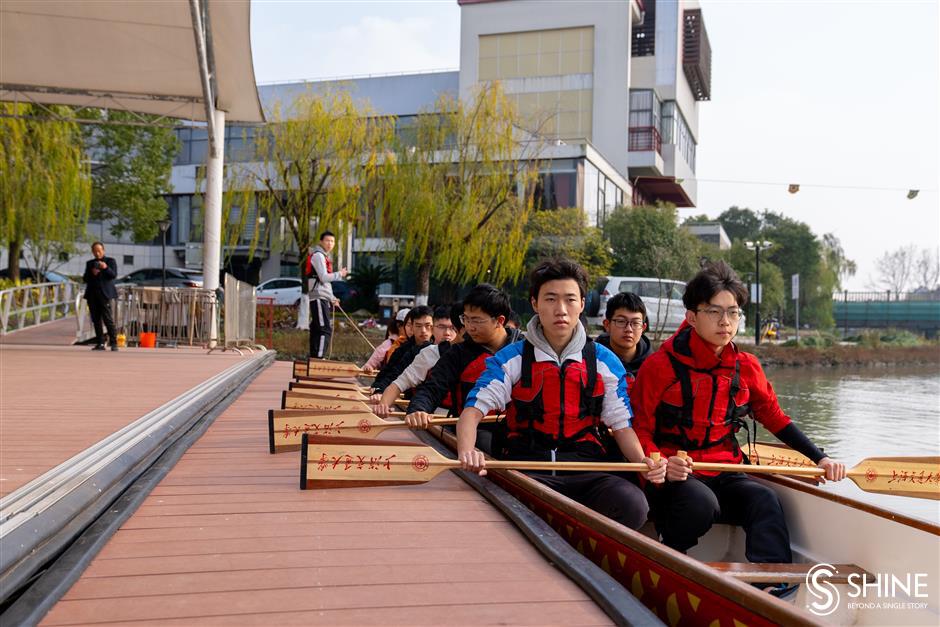 Students are ready to set sail.

To make it more interesting, students in each class are divided into two teams for racing. At the end of the semester, they will be assessed for paddling, racing and swimming, said Gu.

Gu was a football teacher at the university and learned dragon boating through training programs and from professional coaches invited to train the university team.

"I'm still learning by teaching," he said. "Fortunately, SJTU has been performing well in various competitions." 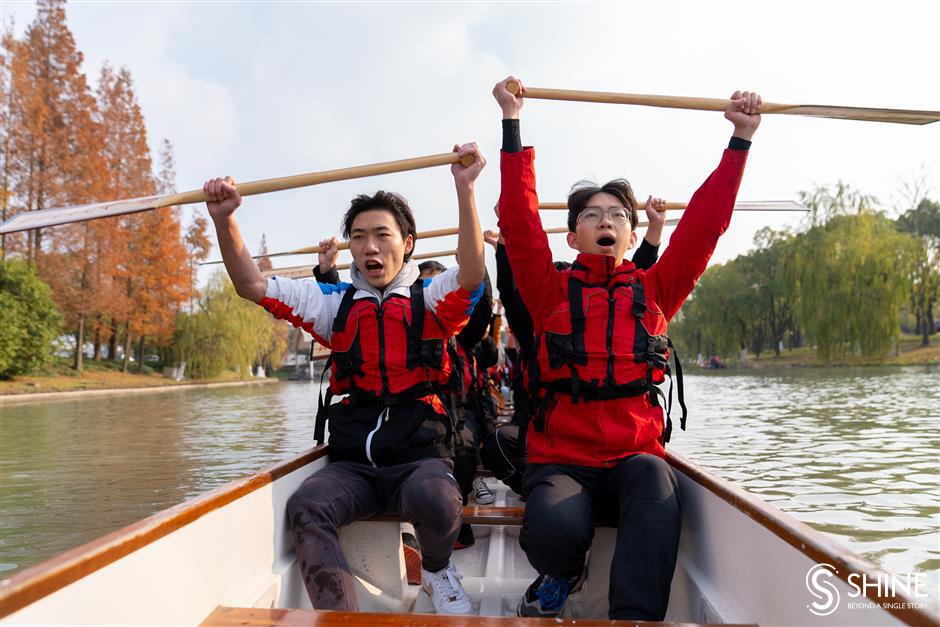 Students compete in a race during the class. 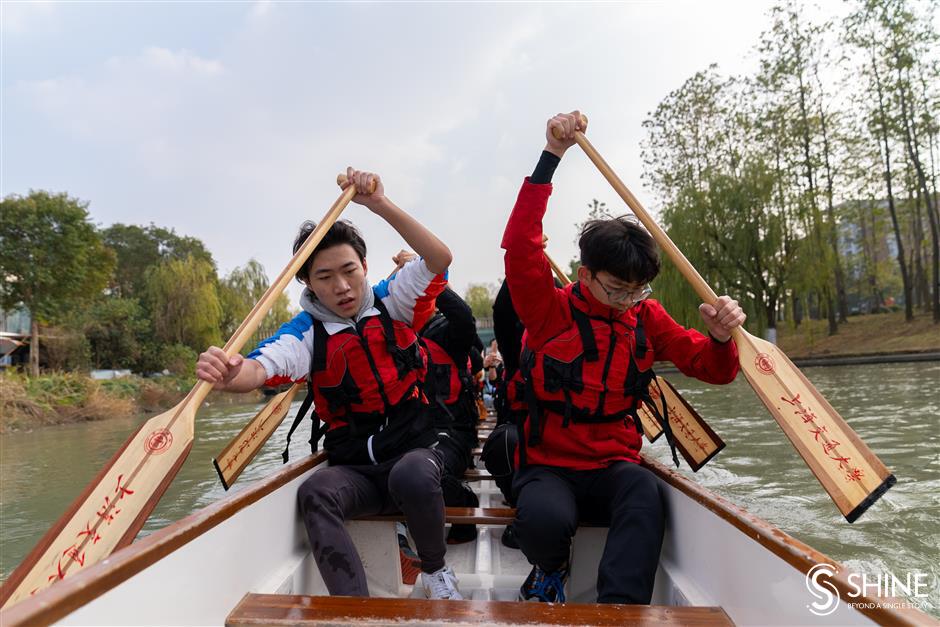 Lee Eun-sang, a South Korean student at the university's School of Electronic Information and Electronical Engineering, is a paddler at one of Gu's classes.

"I served in the Marine Corps in my country and have some experience in rowing rubber dinghies," he said. "And I also love water sports and activities featuring group work, so I registered for the class."

Lee said he didn't know the right techniques of paddling at the beginning and knocked his hand on the shipboard repeatedly, which was painful, but now he is able to cooperate well with his team members after three months of learning. "We listen to the drumbeats to act in concert, otherwise the boat will not go ahead speedily and we have to stop to adjust our paddling rhythm." 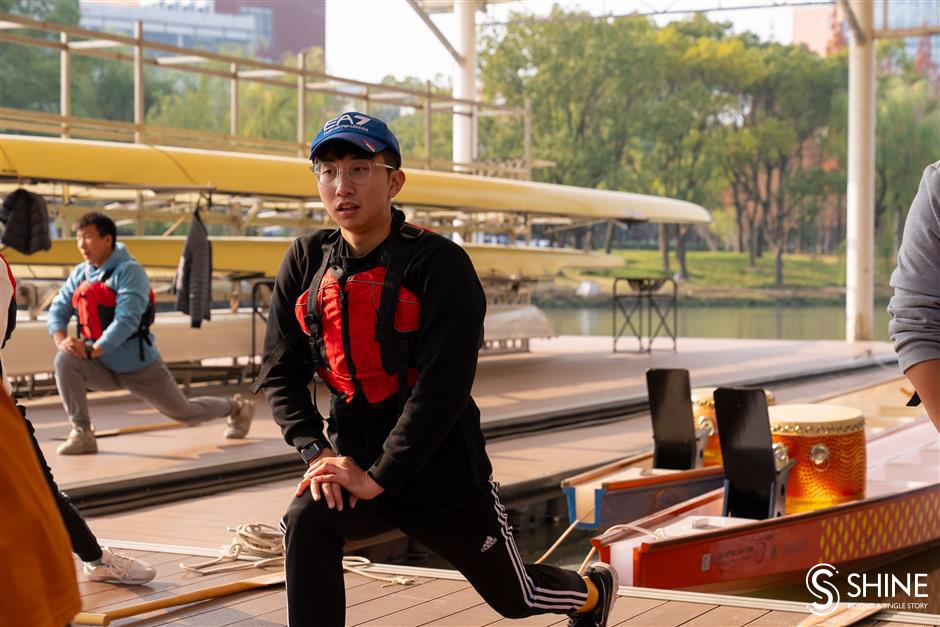 Usually, female students are selected as drummers due to their better performance in rhythm sensation and their weaker strength, but drummers play an important role in a dragon boat team, according to Gu.

Lin Han, a sophomore, is a drummer.

She said she was attracted to sign for the dragon boat class as it was the first of its kind open to undergraduates at the university. 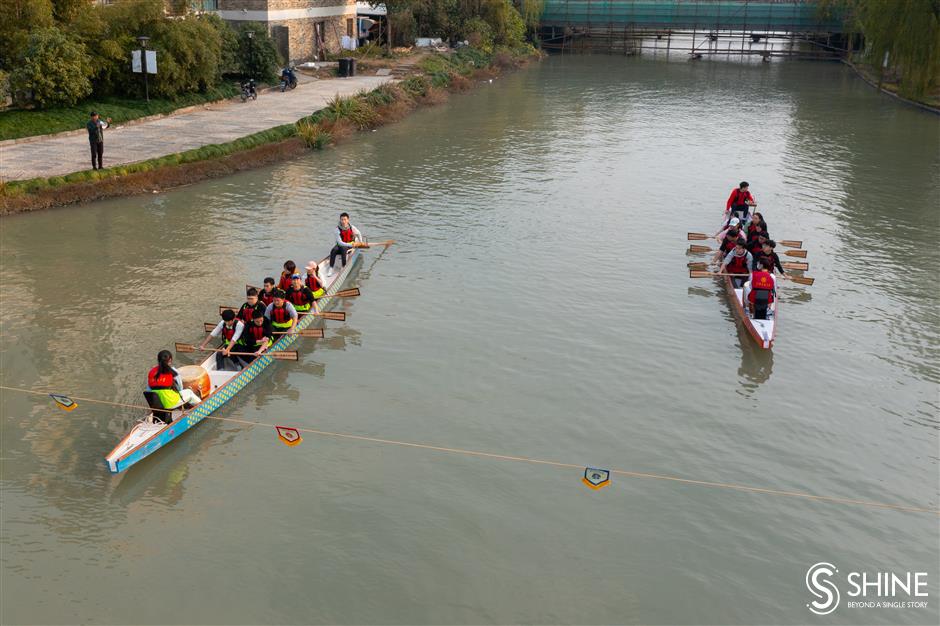 A steersman sits at the end of the boat but it's not a sinecure, according to Mou Guanduo, another sophomore, and a steersman at the class.

"I didn't know what a steersman did because we started by learning paddling facing the teacher as the drummer while his assistant was the steersman behind," he explained. "So I didn't know he played such an important role in dragon boat racing. When I was selected as a rudder, I got to know that I am the one who ensures the boat goes in the right direction. It's also strenuous to control the helm in the water. Each time after class, I feel exhausted. I joined the class out of curiosity but surprisingly found it a good way for physical fitness." 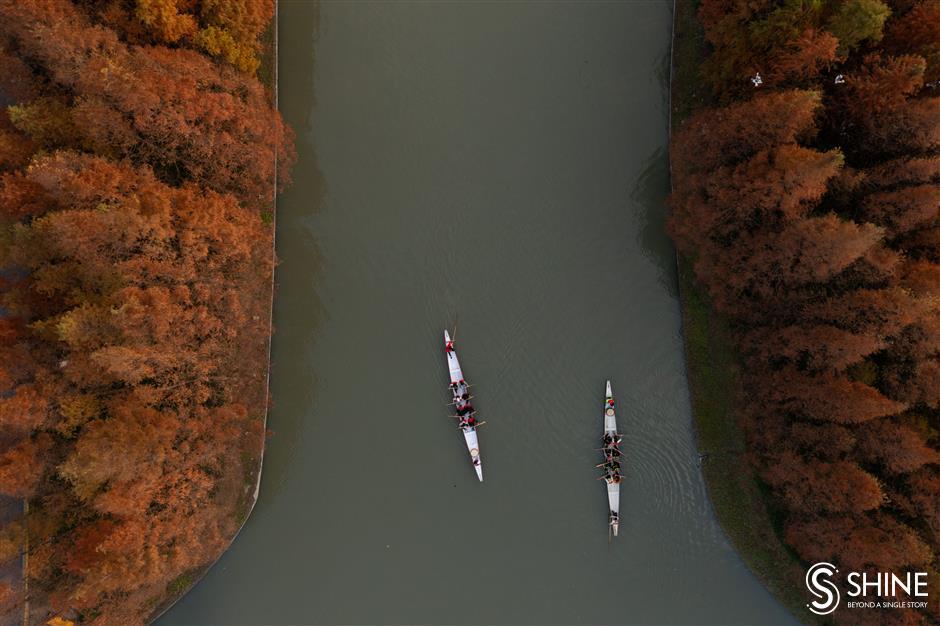 Gu especially loves the sport because of the races. "In our university, we have races among different departments with amateur members. There are also races among universities and international students in Shanghai. I'm glad to see it become more and more popular."

Other local universities have also been promoting the sport in recent years.

Sixteen universities, including SJTU, participated in a 200-meter boat race, during this year's Dragon Boat Festival.

In fact, dragon boat race has been an annual event for international students to enjoy traditional Chinese festive joy. It was organized for 12 years until 2019, then it was paused by the pandemic.

Of late, the Dragon Boat race has been gaining popularity in other countries. In 2010, it became part of the Asian Games, and a demonstration race was organized during the Tokyo 2020 Olympics in its bid to be included in the Summer Games.