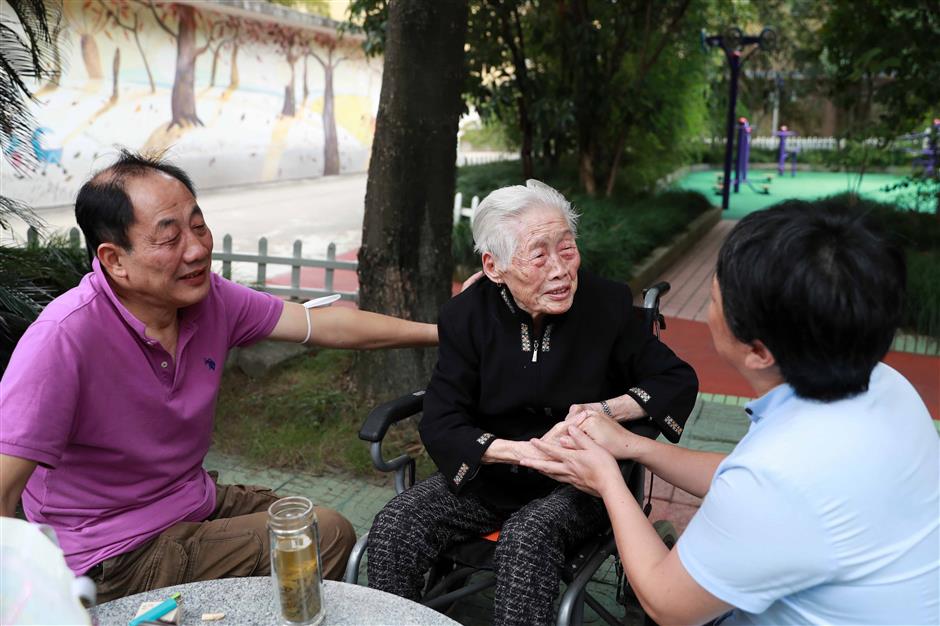 A nursing staff talks with seniors at the Yangpu District Social Welfare Institute.

The award-winning nursing team from the Yangpu District Social Welfare Institute is behind innovative campaigns that have brought a lot of enjoyment to the elderly residents in the largest downtown senior home in Shanghai.

President Xi Jinping said letting all seniors spend their remaining years in comfort is one of his biggest concerns and a key part of the nation's chief target to meet the people's aspirations for a better life.

"It is our common wish that elderly people lead happy, healthy and long lives," he said during a visit to Shanghai in 2018, stressing the need to implement care policies to benefit more aging residents.

The city's nursing team once faced obstacles such as high turnover frequency as well as low social status, pay, and service quality.

Some 90 percent of Shanghai's seniors are cared for at home. Children are reluctant to put their frail parents in nursing homes, not only because of the long and honored tradition of filial piety but also fear of poor service and low quality of nursing staff.

The Yangpu institute aims to break the stereotype by cultivating a group of high-quality professionals.

The institute on Linqing Road was founded in June 1988 with some 600 beds, the largest number downtown. Its nursing team has won multiple top awards, such as the "Most beautiful service window of China International Import Expo" and the "Shanghai May-4th Youth Medal." 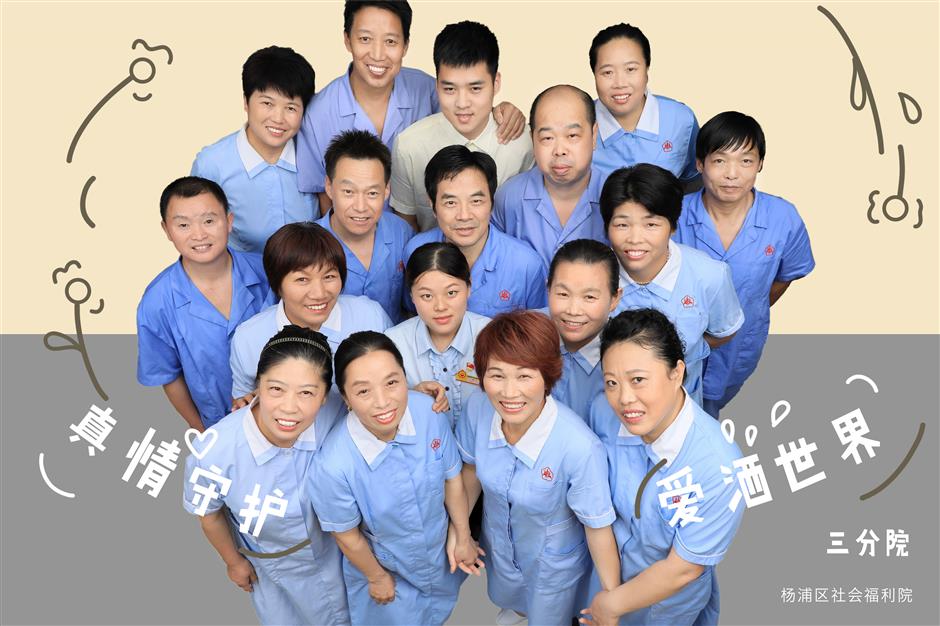 A group photo of the nursing team at the Yangpu District Social Welfare Institute.

The team includes 152 female and 43 male nursing staff. About one-fifth of the staff members are younger than 30 years old.

The institute has created a training and evaluation system to ensure the quality of service. Training classes have been implemented to further assist nursing staff of various skill levels. Six evaluation levels mean different payments and incentives. "Outstanding" or "star" level staff members are selected regularly.

Outstanding staffers are invited to take part in various exchanges or skills competitions every year to offer broader promotion space, according to the institute.

The institute began cooperating with the Changsha Social Work College in 2015 to recruit nursing major graduates to work as interns or regular employees at the institute. They can receive training courses in nursing, social work and first-aid rescue skills.

The institute often organizes the nursing staff to take part in activities such as photography competitions or tours to popular city attractions to relieve their pressure and build positive rapport, the institute said.

Fu Huifang, 28, was recruited to the institute in October 2011 after graduating from the Jiangxi Province Civil Affairs School in eastern China. She was promoted to the position of management official, taking charge one of the buildings in 2013, when the institute launched a competition for management posts among the grassroots nursing staff.

"I was both happy and nervous because it became the second milestone in my career," said Fu.

She cut the number of staff of the Nanshan Building she oversees by a third to 25 to force employees to increase their efficiency. She also modified the duty of each post and optimized the nursing procedures.

"The nursing staff must observe and identify the requirements of the elderly because many of them can't communicate effectively due to their poor physical condition," said Fu. 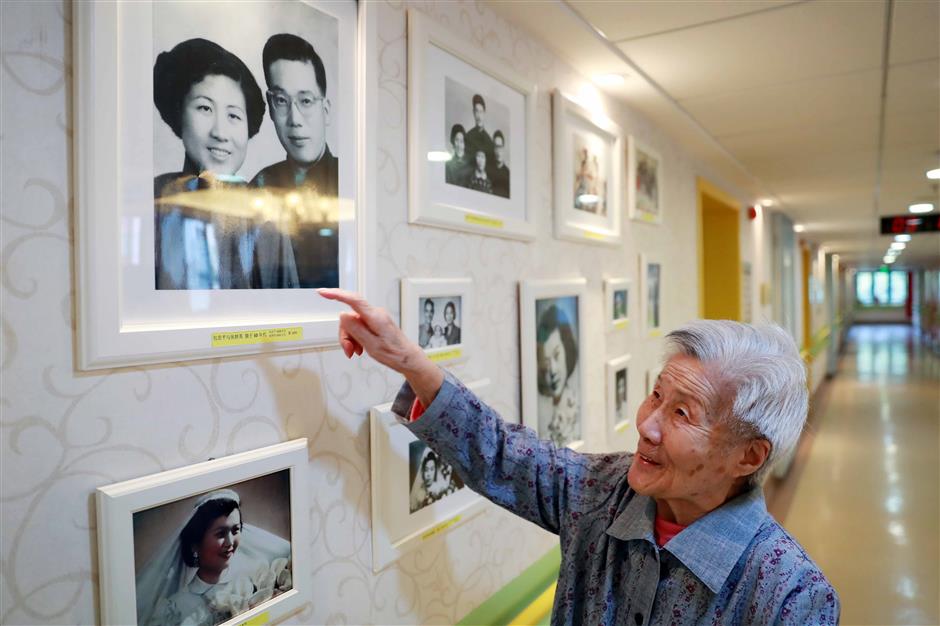 A senior resident at the institute points to her wedding photo in the corridor.

She has been awarded the "May-1st Medal," one of the top awards for laborers and model workers in the city.

"I hope more young people can join us," said Fu. "One purpose of our job is to improve nursing quality for the future when we get old," she added.

Fan Jian, whose mother is living in the nursing home, said the care of the nursing staff saved his mother's life. The senior resident, who is over 80 years old, was choked by her own sputum. The nursing staff removed the phlegm with their fingers and the called the ambulance in time, said Fan.

"I will live in the same nursing home when I get old," Fan said.

Another senior resident wanted to return home every day. Fu persuaded her to take part in various interest clubs and chat with other seniors. The resident got accustomed to life in the nursing home in time.

The Yangpu District government has also released preferential policies to cultivate more nursing professionals like Fu and her colleagues.

Qualified employees of nursing homes, for instance, are eligible to apply for the city's hukou, or permanent residence permit. A new batch of public rental homes will also be available soon for the nursing personnel.

Those with professional skills certificates, like Fu, can apply for housing subsidies of up to 1,500 yuan per month, according to the district civil affairs bureau.

A senior care professional training center has been unveiled at the institute. The center, covering 210 square meters in area, can recruit nursing staff, host training sessions and dispatch professionals to other institutes.

Between July and September of this year, the district awarded a total of 84,000 yuan (US$13,171) to 160 nursing personnel with senior certificates, the bureau said. 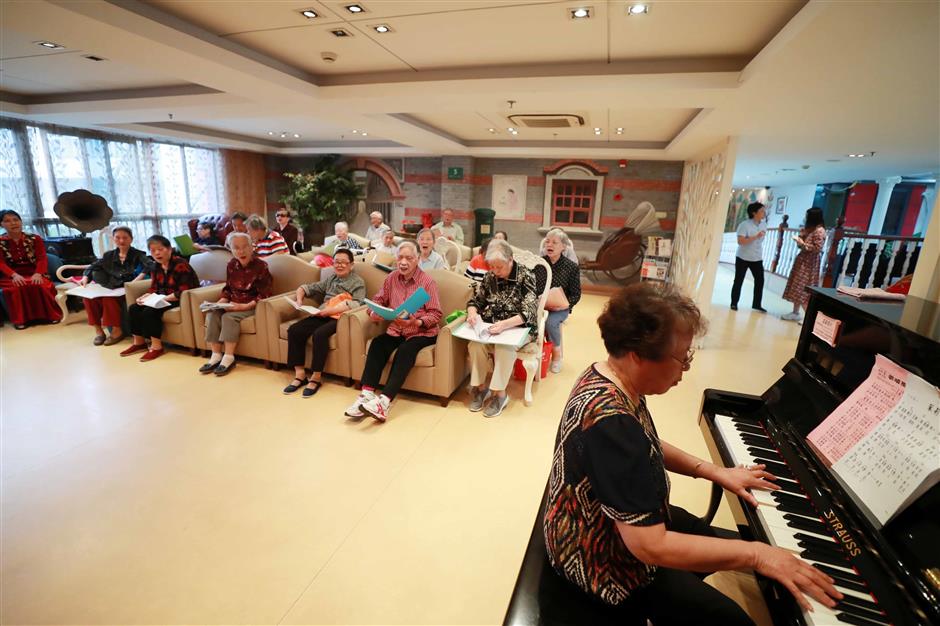