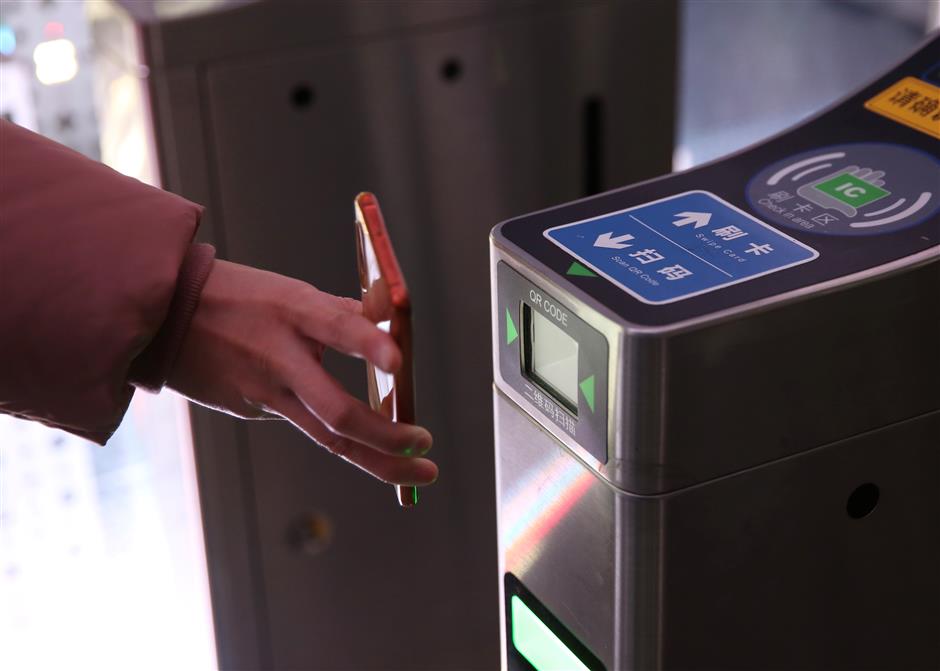 A user of the new service scans her health code "Suishenma" at a turnstile at Wuzhong Road Station on Metro Line 15.

From Thursday, passengers can apply to use their Shanghai health code "Suishenma" to pay fares on some of the city's Metro lines.

Instead of using the public transportation card or apps to ride the Metro, people can now also use the health code to take Metro lines 10, 13, 14, 15, 16, 17 and 18, the Pujiang Line and the maglev line as well as Line 5 from Dongchuan Road to Fengxian Xincheng stations and Line 9 from Fangdian Road to Caolu stations.

For now, people can apply for the service at the "Suishenma" mobile or WeChat and Alipay apps, the "Shanghai Jiaotongka" mobile app or the UnionPay mobile app "Yunshanfu."

The function is available only in Chinese.

A total of 10,000 slots are available at the moment. Another 50,000 will be made available in the course of the next year until all Metro lines are open for service by the end of 2022.

With "Suishenma," people can also take all of the buses in the city's public transport system, except the Fengxian BRT Line and the tramcar lines in suburban Songjiang District, as well as all ferry lines.

All people who have "Suishenma" accounts can apply for the service. Click on the banner on the interface of the app and follow the instructions indicated on the ensuing page.

Shanghai Daily reporter tried the new service at the Wuzhong Road Station on Line 15 on Thursday.

Only one turnstile at each exit allows the use of "Suishenma" to pay for Metro fares. The bill will be sent to the user after about two hours.

At the moment, people who use the service can have 1 yuan (16 US cents) deducted from each ride for up to twice every day, except if they use it to take the maglev line.

Users are advised not to exit a Metro station where the "Suishenma" service is not available for now. In this case, they would have to seek help from station staff, adding to their work burden, Metro operator said.

Those who have suffered this problem three times will be automatically denied the service until it's available to all by the end of next year.

The Metro operator promised that passengers will still be able to use other current payment methods.